She walks. She runs. She jumps.

The 9½-year-old places a hand on her hip as she prances, expressing her personality and even humming a song.

Yet on this walkway, she’s a superstar and a patient—the center of clinical attention—and the beneficiary of innovative technology that will determine how to improve her movements despite the effects of cerebral palsy.

As she advances along a path of mint green force plates at Shriners Hospitals for Children – Houston, data is collected from her steps while 3D motion capture cameras record numerous aspects of her movements.

“This is basically a computer lab. We use computers to quantify motion and movement,” said Annabelle Relf, D.P.T., one of several physical therapists who work in the motion analysis center. “When someone has a full motion analysis study in centers like ours and we do all the data collection, we can say, yes, we think these muscles are tight, these bones are rotated and you should do this and you shouldn’t do this.”

Madilyn Jenkins, 9½, makes her way across force plates that capture data during a post-operative gait analysis exam at Shriners Hospitals for Children – Houston on May 6, 2019 in Houston. (Photo by Nick de la Torre)

Using data beyond a clinical exam to evaluate children with movement disorders began at Shriners Houston in 1978. At that time, the lab used a basic video camera to capture locomotion and electromyography, or EMG, to test the electrical energy of muscles.

Today, the motion analysis center, known as “the MAC,” uses the same technical special effects employed by animators in movies and video games to calculate potential therapeutic and surgical interventions for children ages 4 to 18.

The MAC features foot pressure analysis mats reminiscent of kiosks in drug stores that sell shoe inserts, and a mask for metabolic testing to measure how much energy is expended in movement. Instead of creating Hollywood blockbusters, the center uses this suite of computers, cameras and other specialized equipment as a collective diagnostic tool. 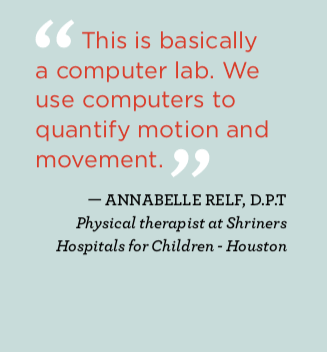 The lab is staffed by physical therapists, a biomedical engineer, a lab coordinator and a technician. This team runs the motion studies, spends weeks crunching the data and then shares its findings in formal reports for “interpretation sessions” with orthopedic surgeons.

“The complication that the children with cerebral palsy have is that sometimes the walking problem is very complex and you need all the data to be able to make decisions,” said physical therapist Rebecca Case, the hospital’s administrative director of rehabilitative services, which includes the motion center. “We want to improve their lives now, but we are aiming at when they graduate from Shriners that they’re as functional as they can be and that they can be successful adults.”

Most of the children examined in the lab for major studies, which take 2 to 3 hours, have cerebral palsy—the most common childhood movement disorder, according to the Centers for Disease Control and Prevention.

A surgical plan can change based on gait analysis, which can clarify the complexity of a case and lead to less trauma for the patient.

“For an experienced individual in gait dysfunction in a child with cerebral palsy—for example, for me—I would say that the motion lab changes what I would plan to do 20 to 25 percent of the time,” said pediatric orthopedic surgeon Douglas Barnes, M.D., the MAC’s medical director for the last two decades and the Shriners Houston chief of staff. “For me, it is invaluable.”

Innovation at the lab has advanced beyond legs, he added.

“We are developing capabilities of refining trunk motion, neck motion and upper extremity motion. There are a lot of problems with that because they are not repeatable like gait cycles, where you go through certain events such as stance and swing,” said Barnes, who performed Madilyn’s latest surgery. We are also interested in capturing spine motion—especially in some of the neuromuscular disorders.”

This expertise earned Shriners Houston national recognition by the Commission for Motion Laboratory Accreditation. The MAC is one of 14 gait laboratories accredited in the country and the first in Texas to receive the distinction.

Improvement and a love of slime

“She was walking on her toes,” Madilyn’s mother, Latonia Jenkins, explained. “I ended up going to Shriners in Shreveport. I didn’t know they had a Shriners here in Houston and I’m from Shreveport. I went home to get her some help. … I was going back and forth.”

Madilyn was born premature in 2009. She weighed 1 pound, 6 ounces and had bleeding on her brain. At different intervals throughout her life, she’s had surgery and therapy to loosen up her left side, where her leg remains stiff and her arm hangs at an angle.

Madilyn had casts on both legs during treatment in Louisiana and was referred to Shriners Houston three years ago.

A previous gait analysis prepared Madilyn for surgery in 2018 on her left arm and legs.

During a three-hour, post-operative exam in May, she showed more control on the walkway with her leg braces and wasn’t standing up so far on her toes.

“She’s a lot better compared to what she was,” Latonia Jenkins said.

Madilyn’s testing included marching and twirling, easy for someone who loves to dance while she sings.

On an exam table, physical therapist Melissa Howard took measurements and manipulated Madilyn’s limbs. A discussion about her favorite things teased out Beyoncé, Nicki Minaj and playing with slime.

At one point, Howard asked Madilyn to hold her muscles tight.

“I’m looking at how strong she is,” the physical therapist explained. “Can she move one leg without the other? Can she move just her knee joint or do all her joints move?”

Howard also wanted to know what Madilyn thought would improve her gait.

“I would like these muscles to go down,” Madilyn said, pointing to the tightness in the back of her legs.

“The knee. That’s my concern,” she said. “After we stretch out that hamstring, I think she’ll be OK. The arm is a lot better. It’s still a little stiff, but it’s a lot better.”

The prize for finishing a gait analysis is a trip to the reward closet. Skipping over the dolls, makeup, puzzles and a purse, Madilyn chose the slime kit. Of course.