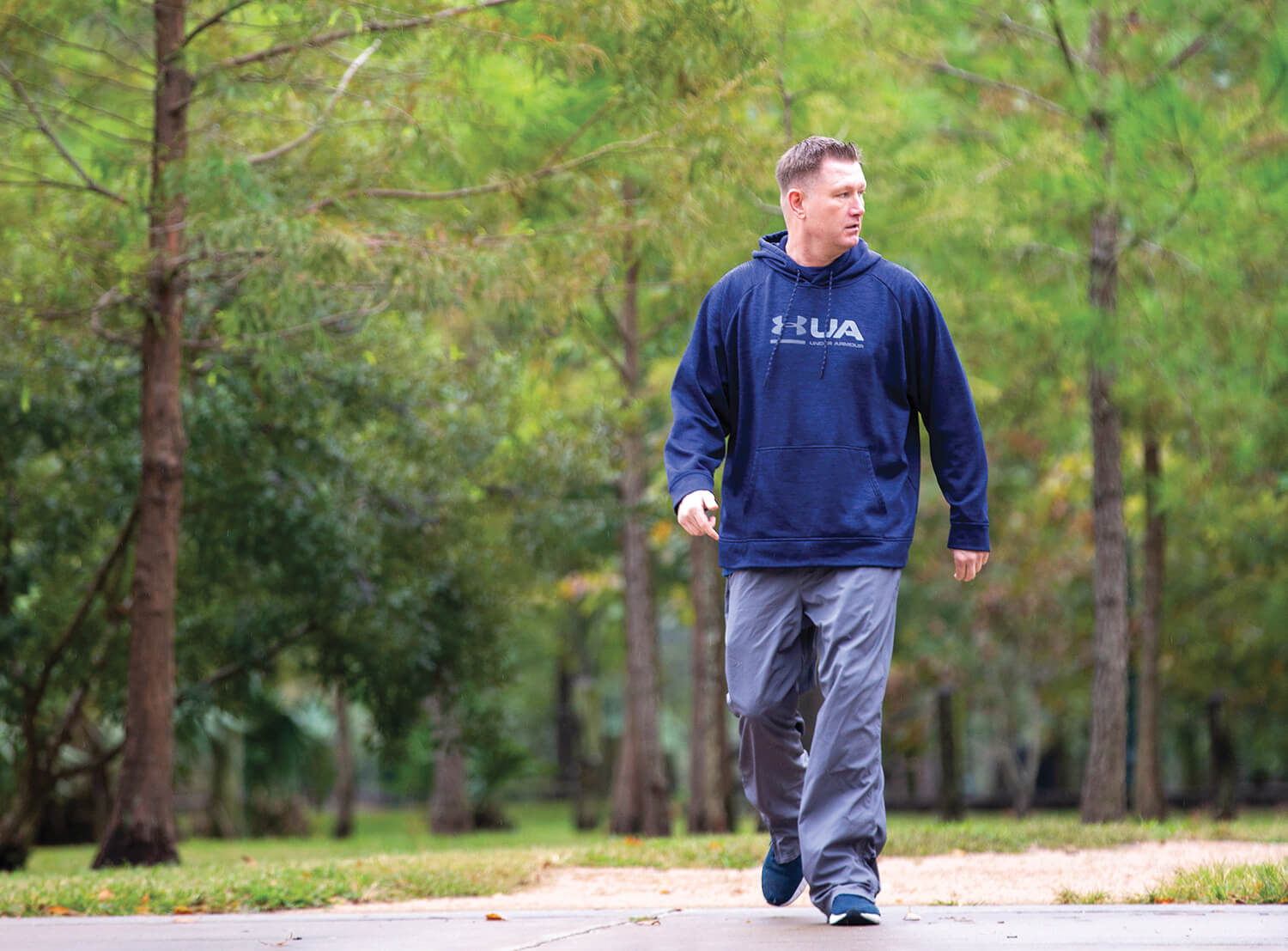 “At first, I was hiding my disease. My now ex-wife thought I was having an affair,” Reynolds said. “You always live in the back of your mind saying you don’t have it—and I wanted to believe I didn’t have it.”

Huntington’s is an inherited, progressive neurodegenerative disease that typically strikes patients in the prime of their lives. There is no cure. The disease unleashes a devastating host of symptoms in most patients—including abrupt, involuntary movements (known as chorea), cognitive decline, irritability and psychosis.

Researchers discovered the gene that causes Huntington’s in 1993. Each child of an affected parent has a 50 percent chance of developing the disease, but if the child does not develop the disease, he or she cannot pass it on to the next generation.

“My grandfather got [Huntington’s disease] and he shot himself—my mom’s dad,” Reynolds said. “He had 11 kids and seven of them had Huntington’s.”

“My mom had it and passed away at 52 from pneumonia. My older brother had it and he passed away at 46. My younger brother died in a car accident at 17, so we don’t know if he would have had it,” said Reynolds, who is 44. “I have two children and neither one of them has been tested—they are 21 and 7 years old.”

Although Reynolds knew about Huntington’s disease before his mother became symptomatic, he said it is a totally different experience to actually witness its progression.

“I never really saw my grandpa,” Reynolds said. “He shot himself before I saw the signs or movements and actions, and we never visited my aunts and uncles who had it, so I didn’t really understand what it was. As my mom went through it, then I started seeing the signs. She had had breast cancer before and a lot of the side effects were similar.”

Before Reynolds was diagnosed with Huntington’s, he attended college at Stephen F. Austin State University, enlisted in the military and became a boomer—an in-flight fueler.

“My mom being sick, she would call me and say things and it would make me want to go and be with her because she was crying and so upset,” he explained. “So, a lot of times, you drop things to go home and be with your family.”

Reynolds was diagnosed with Huntington’s several years ago. It hasn’t been easy, particularly since he watched his mother and older brother suffer.

“You will be a little bit suicidal and things like that,” Reynolds said.

After joining a support group that helps patients manage their symptoms, Reynolds learned of a clinical trial that aims to treat the actual disease. The Generation HD1 trial is the first in-human gene modifying Phase 3 clinical trial of a drug, known as RG6042, to treat Huntington’s. Phase 1 has already been completed in the United Kingdom, Germany and Canada.

“It is a groundbreaking trial,” said Erin Furr-Stimming, M.D., director of the Huntington’s Disease Society of America Center of Excellence at McGovern Medical School at The University of Texas Health Science Center at Houston (UTHealth), one of more than a dozen sites in the United States participating in the international trial. “Phase 1 that was not done in the states was a positive trial. … They proved safety and were able to show that they effectively lowered the mutant Huntington’s protein levels. This trial will hopefully answer what that means. … Does lowering the mutant Huntington’s protein level actually translate into efficacy? Can we slow or halt disease progression? Can we improve symptoms?”

“The individuals who are participating in these clinical trials are our heroes,” said Furr-Stimming, who sees patients at UT Physicians, the clinical practice of McGovern Medical School and Memorial Hermann-Texas Medical Center.

“Any time you participate in a clinical trial, there are risks. It’s a science experiment so there is no guarantee that you’re getting the study drug and that the study drug will work and be safe for you. The ones who are participating are so brave and really carrying the load for the rest of the Huntington’s community.”

Although he has only been participating in the study for a few months, it has given Reynolds hope.

“It was overwhelming knowing what Huntington’s does to you,” he said. “I didn’t want my kids to see me go through it. But the trial has given me a lot of hope and I’m doing it for my kids.”

Furr-Stimming is optimistic that the trial will give the nearly 200,000 people in the United States who are at risk of Huntington’s a reason to get tested.

“Because we currently have no curative therapy, there is really no right or wrong answer when it comes to getting tested,” she said. “If and when we have an effective disease-modifying therapy … it will make more sense to get tested early because we will have an effective intervention.”

Because researchers have identified the gene that causes Huntington’s, a simple blood test can determine whether or not a person has it. Reynolds has some advice for people at risk who have not yet been tested.

Before Furr-Stimming provides testing for individuals who think they have Huntington’s, the patients must meet and consult with her multidisciplinary team at UTHealth.

“Because of the high risk of suicide in patients with HD [Huntington’s], we really want to make sure our patients or individuals who want to get predictive and confirmatory testing are well educated and protected,” she said. “Once they have that information, they will always have that information.”

Before blood is drawn for the test, Furr-Stimming said, each individual will meet with a genetic counselor, a social worker and a psychiatrist. Individuals must return in person to get the results and meet again with the team.

Leslie Dunnington, the genetic counselor on Furr-Stimming’s team, said most people become interested in predictive testing as they approach major life milestones, such as getting married or planning a family.

“A lot of people who contact me have some sort of a suspicion that they have HD, but we can’t know until we do the genetic testing,” Dunnington said. “The most important thing that I do as a genetic counselor is make sure people are as prepared as possible to receive that test result one way or another. A lot of my work is on the front end to make sure we are doing the right thing for the patient at the right time in their life.”

Furr-Stimming was inspired to work with neurological disorders by her uncle, who had Parkinson’s disease.

Outside of the trial, Reynolds spends his time volunteering at Bread of Life, a nonprofit that aims to end homelessness, and the Michael E. DeBakey Veterans Affairs Medical Center in Houston. He enjoys walking and watching sports and movies. He recently took a DNA test to learn more about his family ancestry and found it was similar to the heritage depicted in his favorite movie, “Braveheart.”

It is Reynolds’ warrior mentality that has kept him going.

“I have a lot of Irish, Scottish, English and German, so … many of my ancestors have fought in wars and are Scottish royalty,” Reynolds said. “Any disease or challenge in your life, you have to face and conquer.”