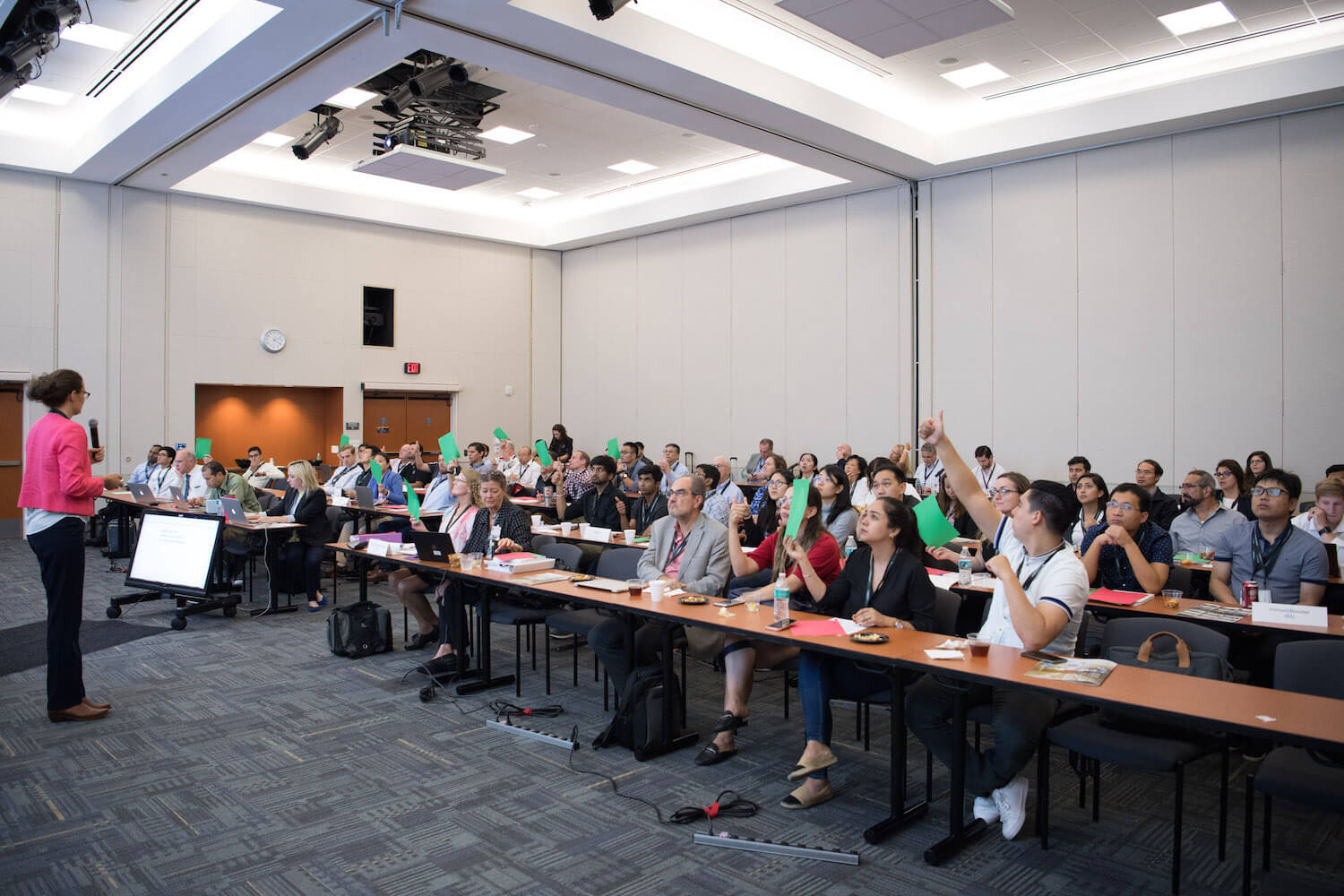 Translating an idea or technology created in the lab to a commercial product is much harder than many researchers have imagined.

This was the consensus of those comprising 19 teams who concluded nearly four weeks of intensive training this week in the Innovation Corps (I-Corps) Regional Program presented by The University of Texas MD Anderson Cancer Center.

“The soup of the day is humility,” one researcher began in his final presentation.

Expert guidance and no-holds-barred feedback is why the I-Corps program is so valuable: Scientists have the opportunity to learn exactly what it takes to succeed in the marketplace—even if it means starting over, said one participant from The University of Texas Medical Branch in Galveston (UTMB) after presenting his team’s results.

The highly selective MD Anderson I-Corps Regional Program, which began in 2015 under the leadership of Alejandro Tortoriello, is part of a national network of commercialization programs that help entrepreneurs better understand the market potential for their idea or research. Tortoriello, the program manager for Strategic Industry Ventures within MD Anderson’s Center for Entrepreneurship Advancement, which sponsors MD Anderson’s I-Corps Regional Program, is a highly regarded national level instructor. The program is federally funded through support from the National Science Foundation (NSF) and has been adopted by the National Institutes of Health (NIH) as well as several other federal agencies. To date, more than 100 leading academic research institutions are participating in the I-Corps network.

The MD Anderson I-Corps course is unique in its focus on the life sciences.

“The curriculum is designed to teach scientists and researchers how to approach the business model and business planning process,” said Jean Gilbert, MPH, program manager for the Center for Entrepreneurship Advancement and MD Anderson’s I-Corps program. “We actually like to look at it as applying the scientific method to entrepreneurship—a top-down approach.”

I-Corps has national cohorts that run 16 times a year, and institutions affiliated with I-Corps run hundreds of regional programs per year as part of the national Node and Sites network. MD Anderson runs a regional program focused on life sciences and health care twice per year.

MD Anderson’s program combines lectures, feedback and opportunities for discovery and customer development. The welcome reception this month at JLABS @ TMC included representatives from the NIH, NSF and the Cancer Prevention and Research Institute of Texas (CPRIT). The teams then go on to complete an introductory workshop and focus on conducting discovery interviews geared toward commercialization potential throughout the program.

“We’re not asking the teams to go out and pitch their idea. We’re really just asking them to go out and do research and have these conversations around the problem that they think they’ve identified that their technology or that their idea would solve,” Gilbert said. “As part of those first two days, they get several big blocks of time to go out and do those customer discovery interviews here in the Texas Medical Center, which is hugely important to a lot of these teams who don’t come from such a robust health care environment.”

Team members are asked to present multiple times throughout the course. They are frequently interrupted by the instructors with constructive—though sometimes harsh—criticism and feedback. But that’s business. 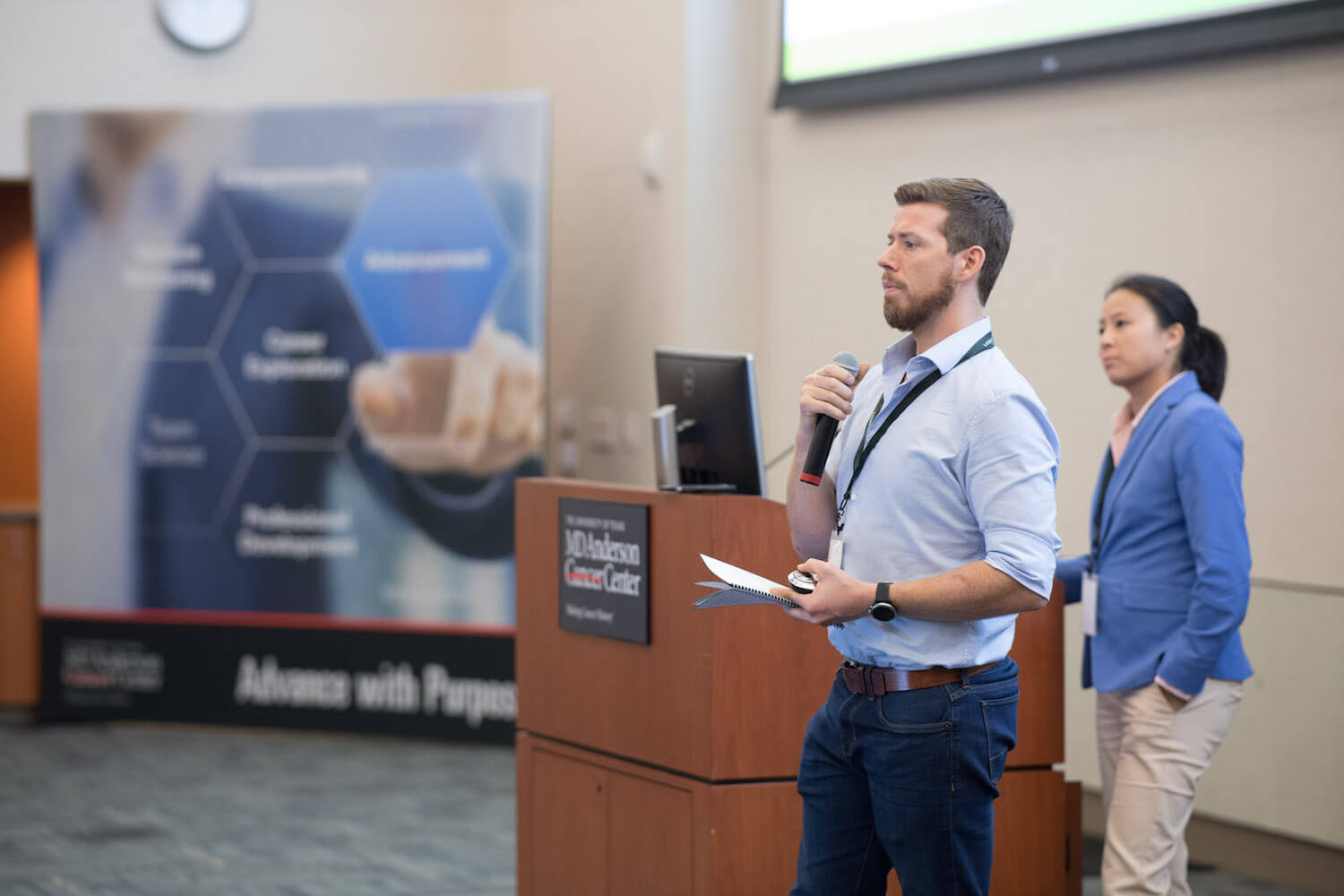 Chris Taylor, the director of MD Anderson’s Center for Entrepreneurship Advancement, added that many scientists—skilled in their area of research—are new to understanding business models and the marketplace, so learning how to conduct discovery is a new and critical frontier as they work to become entrepreneurs.

“A lot of the faculty members who go through this actually get better at their research afterwards—regardless of the commercial outcome—because they actually focus in on the problems that really need to be solved and they separate the difference between impact and passion. A lot of scientists are very passionate about what they do … but a lot of research is done in a silo and they don’t often go outside their lab to really understand the real-world impact,” Taylor said. “Most inventors really focus on features, because they’re builders. They’re building technology and they’re focused on, ‘How do we make this work,’ or ‘How do we address this issue,’ before they even go out and understand what the issue is that they really need to address.”

Taylor likes to share a story about some members of the first cohort he worked with who had spent a decade developing a technology to freeze-dry vaccinations, which would allow for unlimited shelf life, only to realize that mutations—sometimes mid-year for a flu virus—make this far from revolutionary. What struck him the most was what the lead researcher admitted during the team’s closing presentation.

“She said, ‘Today I am extremely disheartened because I spent 10 years of my life working on something just to realize nobody cared, but I’m extremely excited because I’m not going to spend another 10 years working on something that nobody cares about. … I am never, for the rest of my career, going to start a project, spend a dime of money, or a minute of my time until I really understand the problem I am trying to solve,’” Taylor recalled.

That revelation translated to success, he said. For many teams who go through I-Corps, their technology or idea will never advance to commercialization, but their subsequent research will benefit. This opens possibilities for future success, he said, as well as future funding. Many of the cohorts who go through the MD Anderson Regional I-Corps Program hope to advance to the national program in which teams are awarded $50,000 each to support more customer discovery and further development of their technology.

“Our program prepares teams to really take advantage of these other programs and get more impact from them,” Taylor said. “After I-Corps, they understand their customer segments, value proposition and they really understand their business model. They’re now at a competitive advantage.”