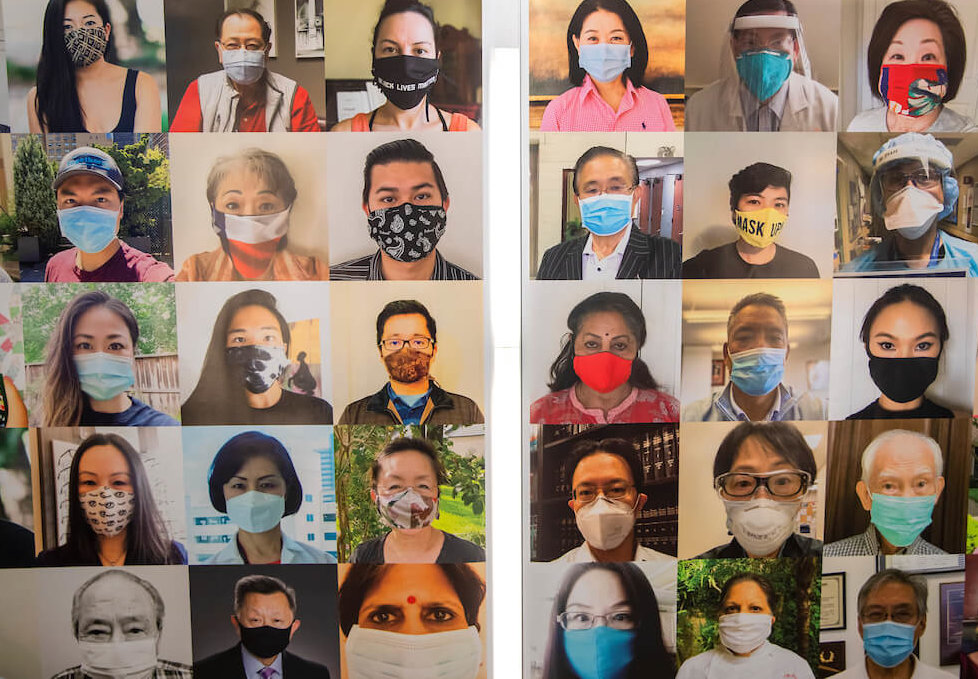 In this pop-up exhibit, the viewer becomes the viewed.

On one wall, 120 life-size selfies are arranged in a grid. Most of the faces have serious expressions; few are smiling. On the opposite wall, the same 120 faces appear wearing masks. Many of the masks are medical, but some are handmade from colorful textiles and a few display written messages, like Black Lives Matter.

“Faces in the Pandemic,” on display through Nov. 15, is the inaugural exhibition of Rice University’s Houston Asian American Archive, funded by the Chao Center for Asian Studies.

More than 100 volunteers sent photos of their faces, masked and unmasked, to be used in the exhibit.

The exhibit speaks to “the deep-seated racism that many Asian Americans and people of color have experienced during the pandemic,” said Ann Shi, associate curator at HAAA and curator of this exhibit. “‘Faces,’ in this context, is about identity and how skin color has influenced our place in society.”

In May, HAAA put out an open call for volunteers to participate in a community project designed to capture the perspectives of Asian Americans during the COVID-19 crisis. Ultimately, 120 volunteers responded, many of them artists and high-profile Asian Americans in Houston, including fashion designer Chloe Dao; chef Kiran Verma; violinist and Shepherd School of Music professor Cho-Liang Lin; and artistic director of Opera in the Heights Eiki Isomura. Their photos are among the 240 selfies that make up the community photo murals.

“When we put out the open call, we asked the volunteers to gaze directly at the camera and have an intense and serious gaze,” Shi said. “These are all meant to kind of give a message—an uneasy feeling when viewers walk through.”

The photo murals highlight shared humanity in the face of a common threat, but also emphasize individual struggles against racism, stereotypes and public misconception.

The second part of “Faces in the Pandemic,” which gather works from professional and outsider artists, responds more directly to the racial tensions that burst and resonated around the world after the May 25 murder of George Floyd in Minneapolis. Many of the pieces in this section reference the history of racial oppression in the United States, including the Chinese Exclusion Act of 1882, which restricted Chinese immigration into the country.

“Forgive but Not Forget,” by Sherry Tseng Hill, responds to acts of violence against Asians in America.

Sherry Tseng Hill’s acrylic on canvas piece, “Forgive but Not Forget,” offers a panoramic history of Asians in America from 1871 to 2020. The painting highlights several historic events, including the 1885 Rock Springs Massacre, in which Chinese miners working in Wyoming were killed and injured; Japanese internment camps; and the 1999 murder of Joseph Ileto, a Filipino American postal worker shot down by a white supremacist in Los Angeles.

“I chose to highlight this repetitive history of scapegoating, hate-mongering, ignorance and hatred still being perpetuated to this day by the current administration, as a call to reject the hate,” Hill wrote in an artist’s statement. 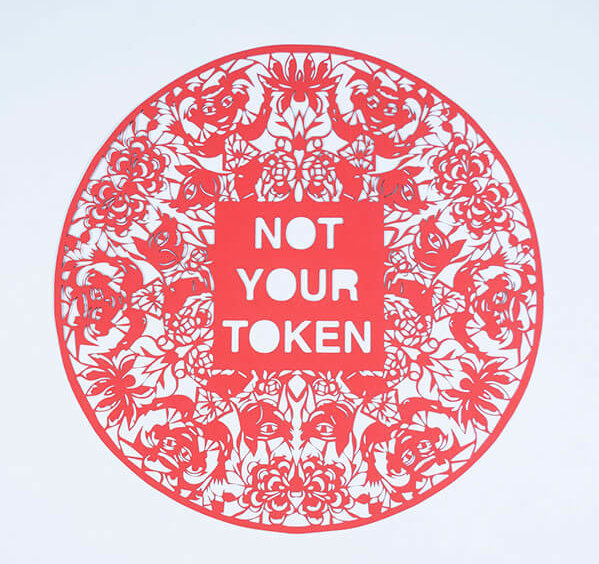 Vietnamese American artist Antonius-Tín Bui’s intricate laser- and hand-cut paper pieces, part of a folk art tradition dating back to the second century, feature textual messages aimed at subverting Asian stereotypes. The phrase “NOT YOUR TOKEN” appears in one circular red piece, “NOT YOUR ASIAN SIDEKICK” in another. “NOT EXOTIC” is cut into blue paper crafted in the shape of a vase. All are part of the artist’s “ReModel Minority” series. 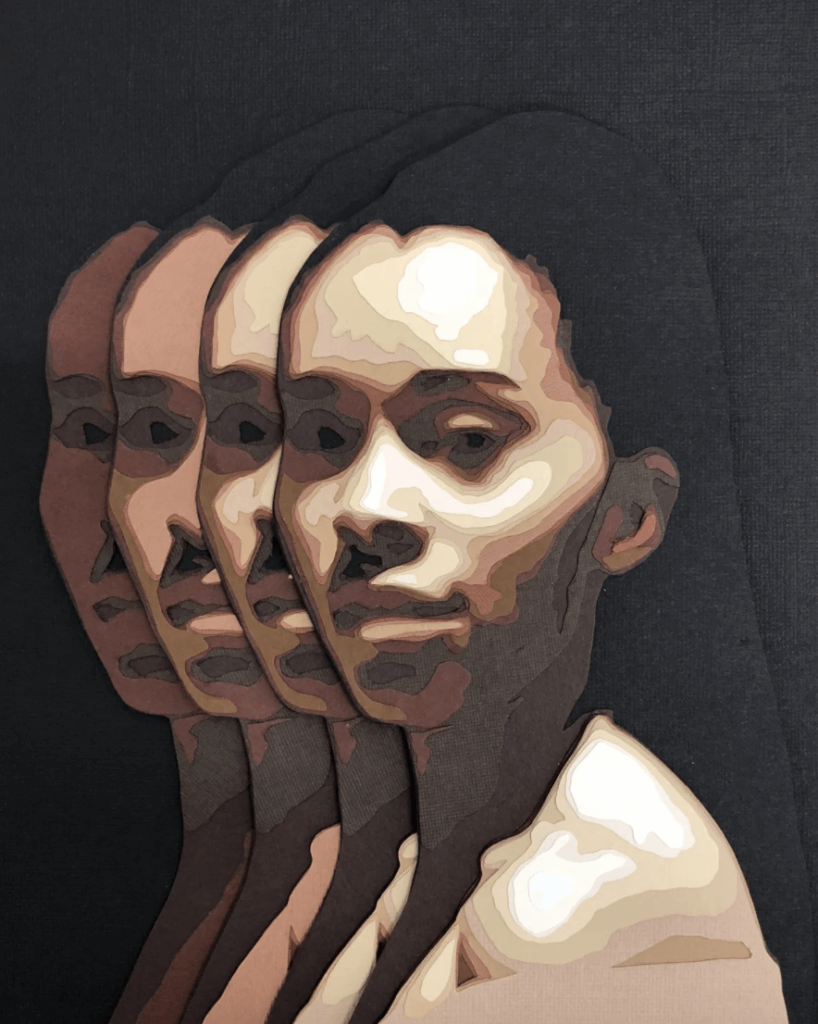 The four portraits depicted in Anthony Pabillano’s “Progression of a Portrait” are framed separately in the exhibit, which allows the viewer to see how each version is built from layers of different colors of paper.

Anthony Pabillano also uses hand-cut paper, but he builds layered portraits from multiple colors and shapes, one piece of paper stacked on top of the next. “Progression of a Portrait” suggests that every individual is made up of many shades and tones. 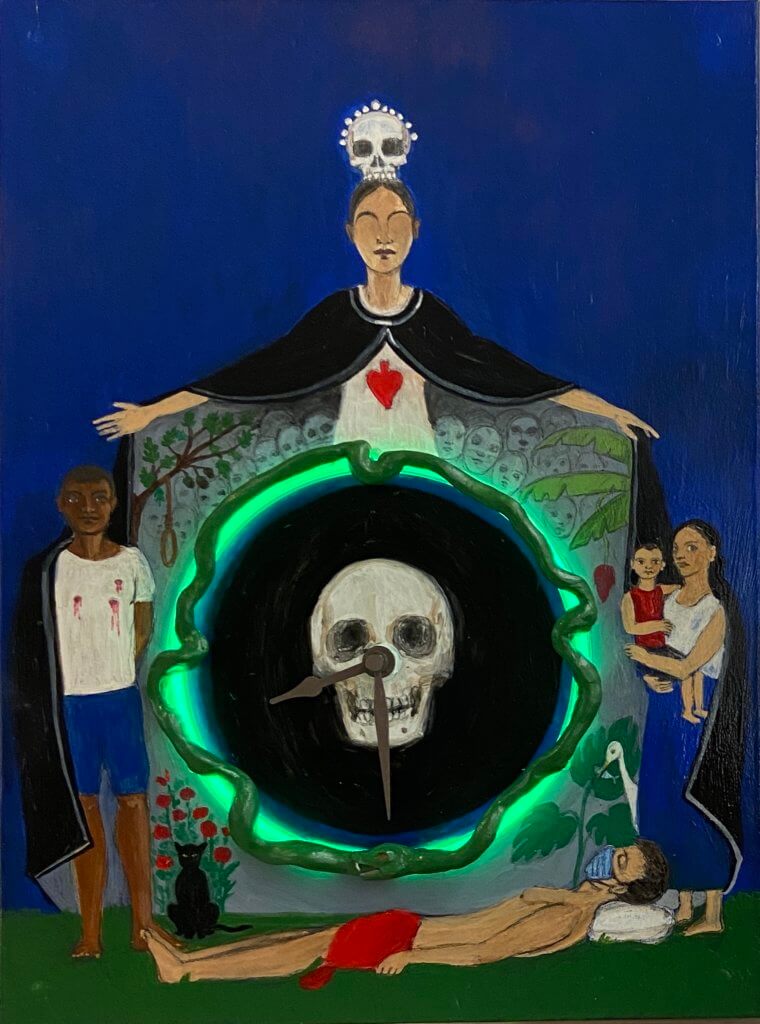 “The Good Hour,” by Victor Ancheta, is made from tin, LED neon, paint and gesso.

Victor Ancheta’s “The Good Hour” is a functioning clock that speaks to the final hour of a person’s life. A skull appears in the center of the piece. At the bottom left, a Black man stands with bullet holes in his white shirt. At the bottom right, a mother holds her child. All three figures are wrapped in a black death cloak. At the bottom center, a victim of COVID-19 lies supine, wearing a face mask. 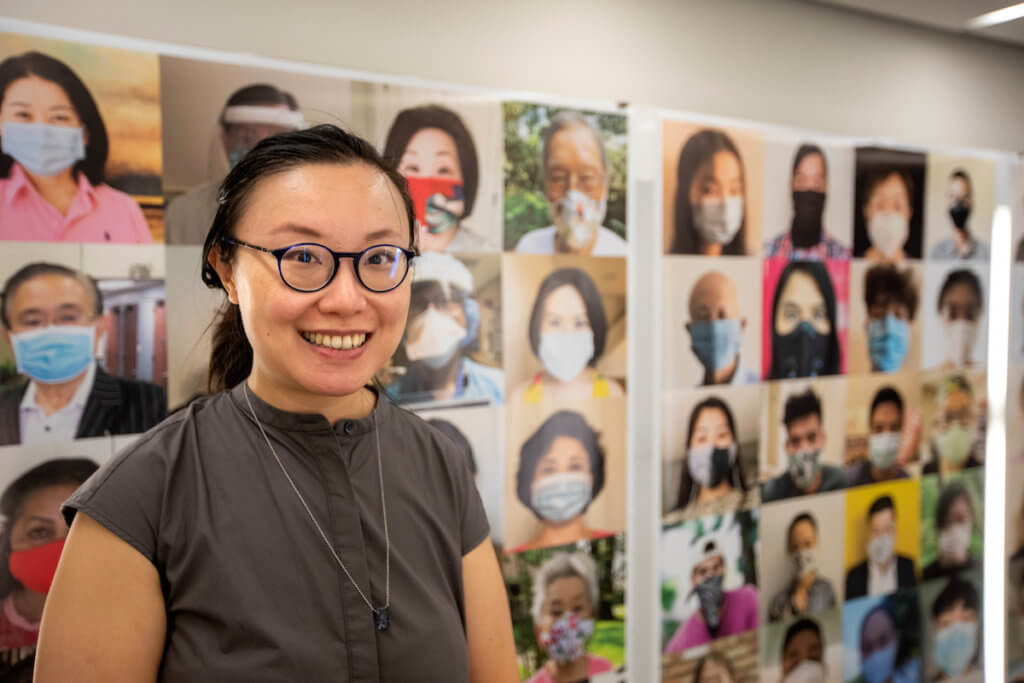 “Faces in the Pandemic” illuminates “a topic that is very timely and that will lead to lots of discussion,” Shi said, “especially as we get closer to the upcoming election.”

Rice University’s Fondren Library is in Phase 3 reopening for Rice students, faculty and staff, but members of the public can visit “Faces in the Pandemic” by making a reservation; no more than two guests at a time are allowed. To make a reservation, go to calendly.com/visithaaa/reservation. For library hours, visit library.rice.edu/.