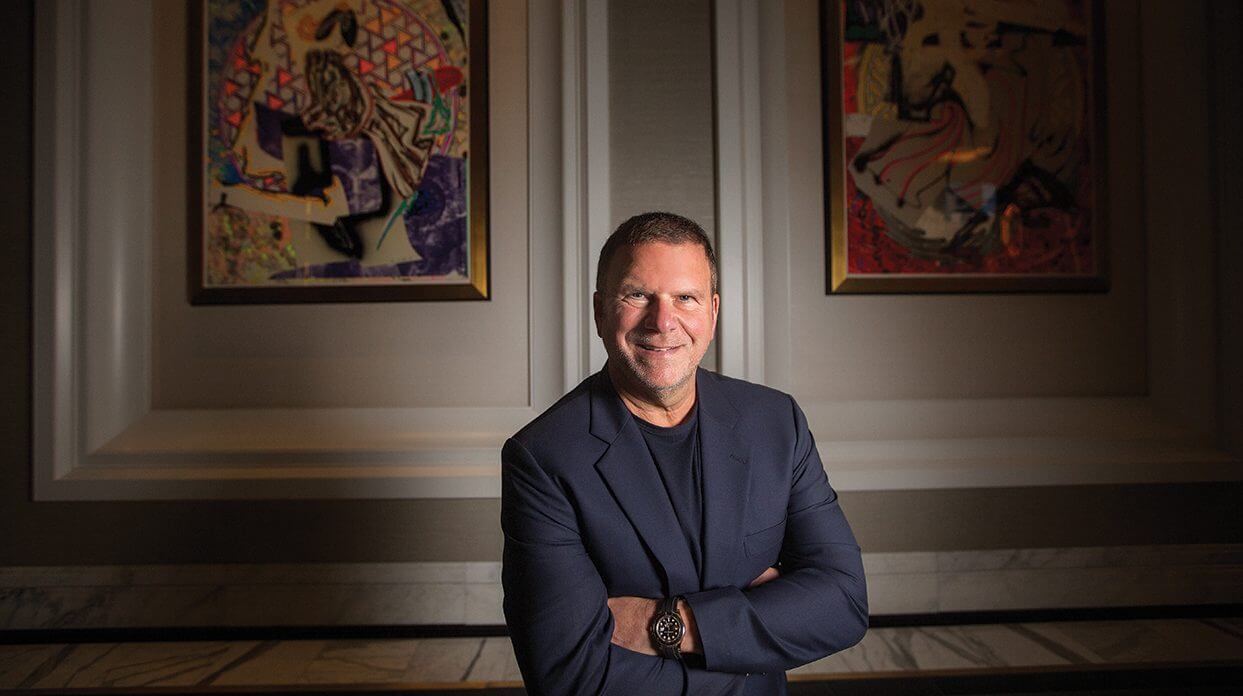 Houston billionaire TILMAN FERTITTA, ranked 153 on the Forbes 400 list of wealthiest Americans, runs a vast entertainment empire that includes restaurants, hotels, casinos, boardwalks, an aquarium and the Houston Rockets. The 61-year-old also stars in “Billion Dollar Buyer” on CNBC and chairs the University of Houston System’s Board of Regents. From his Houston office, next door to the luxurious Post Oak Hotel at Uptown Houston that he opened earlier this year, Fertitta spoke with Pulse about health, hospitality, philanthropy and amusement.

Q | You star on CNBC’s “Billion Dollar Buyer” and, since you bought the Houston Rockets in 2017, you’ve spent a lot of time at the NBA team’s games. How has your life changed since you’ve become a higher profile public figure?
A | In Houston, because I’ve just been around so much longer than everybody else, I could duck into a little bar to get away and three people are going to know me. I had a function at my house on a recent Saturday—500 to 600 people on behalf of the Houston Police Foundation—and I’d go out and mingle for 10 minutes and then I’d go inside and hide. That night, me, the police chief, the fire chief and a Texas state senator were in Mastro’s late, having a drink. They just got a kick out of it because they all have these high-profile positions and everybody comes up to me and wants a photo. Even in New York, L.A., Baton Rouge, people just stop me and they recognize me. But remember, I do sports TV, business TV, the television show and there’s been a lot of magazine articles. It’s just become building a brand. And in Houston, where we don’t have a lot of business leadership, I’m kind of the only guy in the business world who’s really known.

Q | You chair the UH System’s Board of Regents. How involved are you in finding a site for the new University of Houston College of Medicine and championing its commitment to primary care?
A | Very much so. Me and the chancellor were just in the medical center looking at a site there, and we were looking at a site by the University of Houston. [Editor’s note: After this interview, UH announced the selection of a site on the main UH campus.] I’m totally involved with it from the legislative standpoint. In terms of the focus on primary care and the diversity and special needs of the Houston population, that is the basis of why we are doing it.

Q | How has the hospitality industry changed over the past few decades? Millennials like services; has this generation affected what you do with your restaurants and hotels and other properties?
A | When I was growing up, you went to dinner just to have dinner and it was just four walls. And then it became part of entertainment, where restaurants had to have atmosphere, not just good food. Growing up … do you remember Steak and Ale? There was a little bit of theme to it. This was a big deal—going out to dinner at Steak and Ale. The point is that the world has changed. When I turned 16, I was down at the driver’s license office to get my license and so were my friends. But none of my children did that and none of their friends did either. They just don’t care as much because they can have anything brought to them and we had nothing brought to us. And we didn’t have a way to communicate with our friends except on our parents’ phones, so, we got in a car and went to see them.

Q | So how do you respond to that generational shift within your restaurants and hotels and event spaces?
A | Well, you build a bigger take-out area. [Laughs.] Honestly. One hundred percent. You have to design things to fit today and that’s what we’re doing. It’s a totally different world today and the people that change are going to continue to be successful and the people that don’t change won’t be.

Q | Let’s talk about your personal health. This is the one part of your life you cannot outsource, no matter how much money or help you have.  You’re a busy man, in and out of the helicopter and plane, back and forth to places like Atlantic City, Las Vegas and so on. What’s your health regimen?
A | When I have a really bad Saturday night eating, I’ll go to Memorial Park and run on Sunday. But other than that, I try to ride a stationary bike a couple of days a week. And work out, you know, even if it’s just for 10 or 15 minutes a day. But you have many days that you don’t. That’s just life.

Q | What about diet? Are you strict about your eating habits?
A | I’m not a big lunch person. I don’t like to go to lunch because you can eat bad. I tend to eat a Lean Cuisine at lunch, under 300 calories. I eat nothing in the morning. I bet I eat, on average, at 9 o’clock at night and I bet I eat, on average, for the first time at 2 o’clock in the afternoon. That’s a long time. In the morning I might have three cups of coffee. 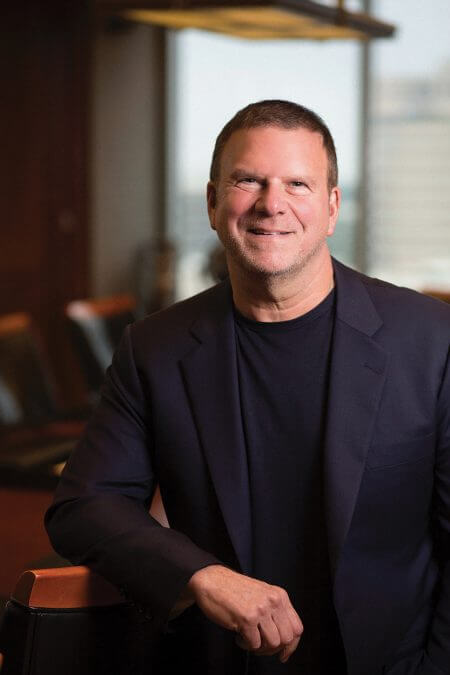 Q | How much do you sleep? Are you a napper?
A | Probably seven hours. And nope. I would love to be able to shut it all down, but I don’t have that ability.

Q | When do you have personal time during the day?
A | Morning is personal time and work time. I like to get up and watch CNBC, read some newspapers on my iPad—business and sports news. Probably do six phone calls from home, probably read about 80 emails. Then I end up in the office around noon. I’ll go home at 8 or 9 at night.

Q | Because you own so many properties and businesses, you delegate various duties to trusted employees. After all your years in business, though, are there any tasks you still insist on handling yourself?
A | Probably the only thing I just like to totally have my arms around is the budgeting and the money. Not at a lower level where it’s in the stores, but once it moves up in the budgeting. I like to make sure that you always have two different ways to pay when you’re developing something. In case something happens to plan A, you need a plan B.

Q | Fertitta Entertainment is a holding company that bundles all your assets—Landry’s properties, the Golden Nugget casinos and the Houston Rockets. What can you tell us about this juggernaut?
A | You do things from a liability, structural and tax standpoint. That’s where all the assets are and if you try to take them out you’ll pay taxes on them. Even though there are different credits on all your different companies, you file one tax return. The whole object is not to pay taxes. I have no problem with saying I personally don’t pay very much in taxes. I get huge depreciation because of all the assets I create. I’m not ashamed of that. I create thou-sands upon thousands of jobs and make sure all the payroll taxes, property taxes, state taxes are paid. So if I don’t pay much federal income tax, so what? I’m the person who keeps capitalism in America going.

Q | Is there a big difference between being a millionaire and a billionaire?
A | There are major differences within those categories. Somebody can be worth $5 million dollars or $500 million dollars. And there’s a big difference in being worth $1 billion and $5 billion. But believe it or not, 98 percent of the time everybody lives the same and my life is no different than yours. You get up, you read the paper, you drink coffee, you eat a Lean Cuisine for lunch. The only difference is: At 7 o’clock tonight, I might leave here and take a helicopter to go get on my jet to fly me somewhere. So there’s a couple of hours that are different. But I live a normal life. I walk through my properties. I pick up trash if it’s on the floor. I talk to bus boys.

Q | There must be other perks.
A | The toys are bigger for billionaires.

Q | What’s your favorite toy? The jet?
A | [Long pause.] The jet’s really not a toy. That’s just a way to get somewhere. The Rockets aren’t a toy, either. It’s big business that I paid $2 billion for! I guess I’ll say my yacht. I like it a lot. I’m on my fifth one and building my sixth one.

Q | Do you have an exit strategy from the business you’ve built?
A | I don’t have one because this is a family business and my kids will, hopefully, one day run it. I’ve watched many people sell their fiefdoms and they have a bunch of money and then they say, ‘Why did I do that? What do I do with the money?’

Q | What do you look forward to most every week?
A | Coming to the office every day.

Q | Is there anything you dread?
A | I really don’t have anything like that. I’ve gotten rid of all those things.

Q | As a philanthropist, you’re involved with the Houston Police Foundation and the Houston Children’s Charity. What’s your philosophy on giving?
A | My philosophy on philanthropy is, a lot is expected, but it’s not just about money; it’s also about doing things. I’ve given away a lot of money, but I haven’t given away a lot of money. You’ve got to remember, I’m still out there building. I’m still spending. If I sold everything and had a few billion dollars in the bank, that would be my life—to give money away. But I’m still creating gigantic projects. I can give a few million here, a few million there, but not a crazy amount.

Tilman Fertitta was interviewed by Pulse editor Maggie Galehouse. The interview has been edited for length and clarity.