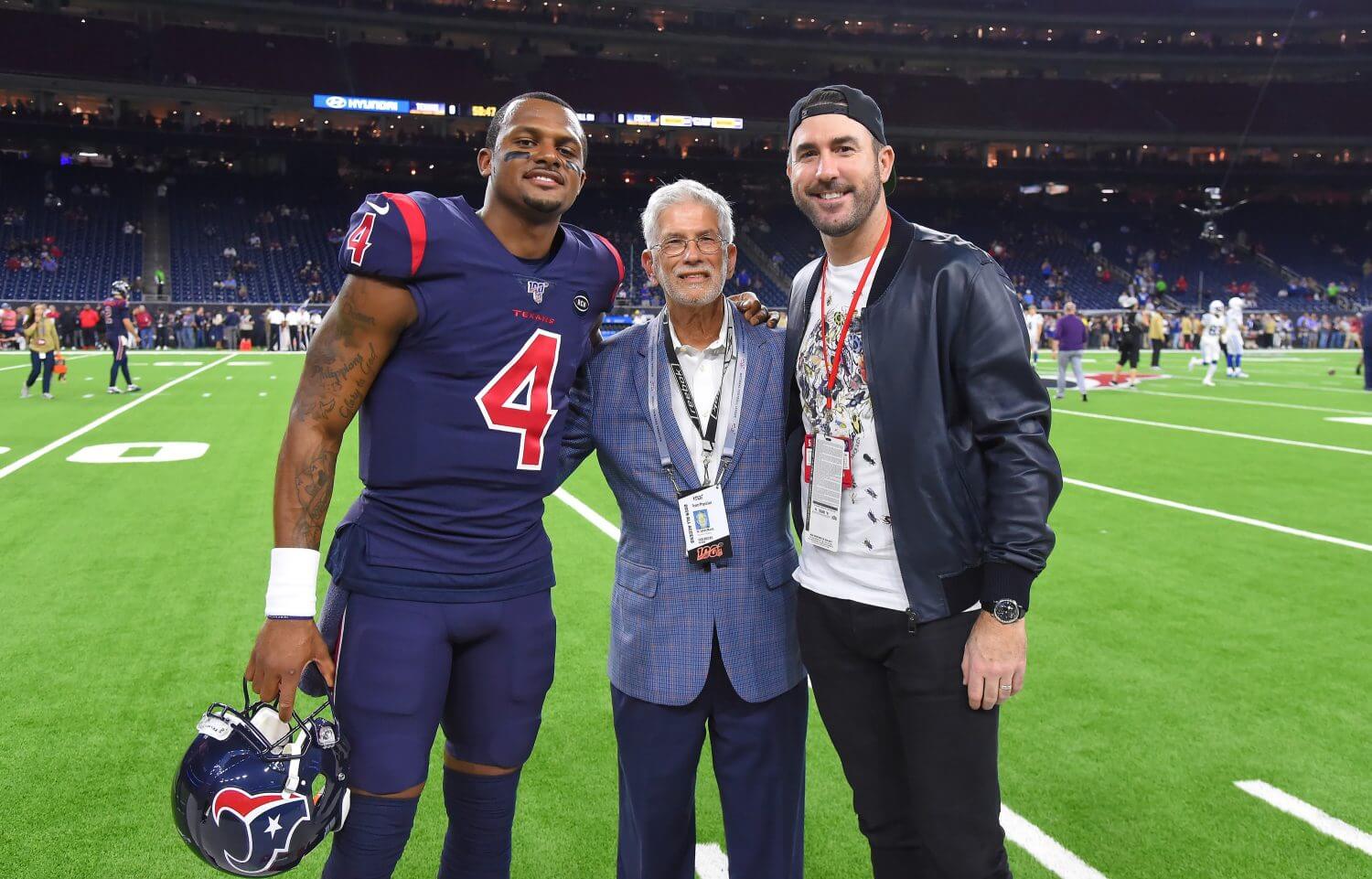 Over the past 30 years, internist JAMES MUNTZ, M.D., has worked as a team physician for nearly every professional sports team in Houston, collecting championship rings from the Houston Rockets, the Houston Astros and former WNBA team—the Houston Comets. A native of Tyler, Texas, Muntz attended Baylor College of Medicine in the 1970s and got his start in sports medicine in 1984 working with the Houston Gamblers of the now-defunct United States Football League. Today, he is the team physician for the Rockets, the Astros and the Houston Texans, in addition to running his own busy practice. Muntz is also a professor of internal medicine and orthopedics at The University of Texas Health Science Center at Houston.

Q | What was it like spending time with the Astros during the 2019 World Series?
A | The players are pretty calm. They’re positive. To be down 0-2, and then to go out of town to Washington, D.C., it was incredible for them to win three in a row. Everybody was at the top of their game, and it was two really good teams.

After the Game 7 loss, it’s such a change in emotion. As a spectator watching it, you’re feeling pretty confident. I thought people were getting ready to celebrate. When you go seven games, you realize how close you were to winning. But ultimately there was no celebration. The champagne gets put back away. All the plans made for the victory, the parties—all of a sudden they’re not there anymore. But we had a great season, and we’ll be ready to come back.

Q | Do you ever wear those championship rings?
A | Only a couple of times, just to show them off. I have them locked up.

Q | Do you see the athletes at their facilities?
A | I have a clinic with the Texans. During the season, I go over to NRG Stadium. I go to the training room every Thursday. Some people are under concussion protocol. Some have sinus infections. And I’m there on game day. For a game at noon, I go over at 9 a.m. and I get home at 5 or 6. Those are on my weekends off. 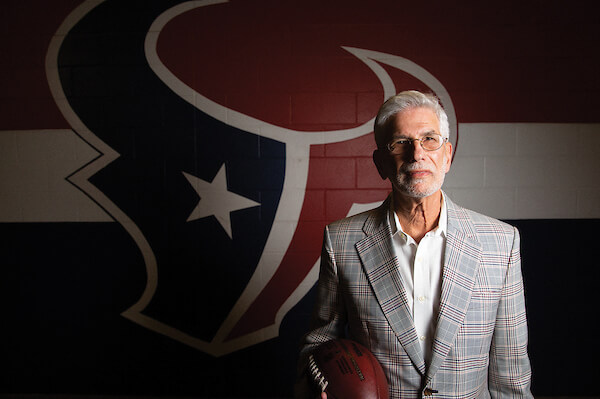 James Muntz, M.D. has worked as a team physician for nearly every professional sports team in Houston.

Q | What’s game day like? What are you doing to prepare?
A | Somebody may be sick with a cold, or they’re short of breath. They might have a boil or a MRSA infection. They see us for anything before the game. We’d know before Sunday if they were coming out of the concussion protocol. During the game, I’m watching for medical issues like dehydration, blood pressure, headache, concussion and migraine.

Q | What’s the difference, for you, between treating an elite, professional athlete and a regular patient? Do you carry yourself in a different way?
A | With a regular patient who comes in—I probably see 120 per week—we try to be prompt, thorough and use state-of-the-art treatment. Half my patients are young and half are older and on Medicare. Younger athletes—you deal with the parent, with the school. It’s easy to tell a young athlete’s parents ‘this child shouldn’t play.’ A professional athlete, you have to talk to the player. You might have to talk to an agent. They may get a second opinion. But there’s probably not a lot of illnesses that keep these people out of football.

Q | How difficult is it to tell athletes they’re going to miss serious game time?
A | These guys are young players—mostly 20 to 30—and it’s tough for them. It’s what they live to do, train to do. The orthopedic people probably have to do this more. But we have players with lingering symptoms who can be out one to three months. We’re aware of the illness, the time they can be out, what it can do in terms of anxiety and depression, and we try to address all of that.

The NFL has initiated a thing this year to specifically address mental health and stress. It’s very confidential. I’m on the team with psychologists and psychiatrists, so we can address any kind of issue, whether it’s family, marriage, the stress of playing—whatever it may be.

Q | Can you tell me about the race to save former Astros coach Rich Dauer, who collapsed during the 2017 World Series victory parade?
A | Everyone was at the parade celebrating. I wasn’t there. I live 2 miles from the med center. It was an incredible chain of events. He was brought in a roundabout way to the hospital at Methodist. They told me on the way he had collapsed at the parade. I immediately came in. The concern was he had fallen. We got emergency scans of his head.

I called two neurosurgeons. I told the first person if you can’t get here in 5 minutes, I’m calling someone else. He got here in 4 minutes. The other happened to be here doing paperwork, so he was over immediately. Rich went for surgery. The surgeon said he had a 2 to 3 percent chance to live.

About 10 or 15 days later, Rich sent me a picture of him vacuuming the house. He wrote me a text a week or so later that he had worked out 45 minutes, then ate a seven-layer burrito. I told him if the subdural hematoma didn’t kill him, the burrito would.

That was 2017, and the next season he threw out the first pitch at the opening game. It was a pretty wild case.

Q | As a doctor, I imagine it’s hard to see patients continue to injure themselves. But for these athletes, that comes with the job. How do you manage that?
A | First and foremost, we want to protect the player. We err on the side of whatever is safe for the player. If you, for example, had a broken rib, we’d say ‘take it easy.’ Maybe work four hours instead of eight. But a player might play with a broken rib. They know the risk and you tell them. They deal with aches and pains. Can you imagine a lineman hitting someone 70 times during a game and coming back the next day and running in the heat? It’s glamorous, but it’s tough.with DeShaun Watson

Q | You’ve been doing this for 30 years. How has the role of the team physician changed?
A | Technology has changed it. There’s more awareness of concussions and injuries. It was a little bit more laid back before. Now, we watch every play from the ground and from the press box. There are other doctors on the sidelines. We have a neurosurgeon, a back surgeon, a hand surgeon. There’s a radiologist and an airway expert—all on the sidelines. Everyone helps each other. Before, there’d be two orthopedists and a medical doctor. There’s more people, more technology, better equipment, better training and better eyes.

We have coaches that report stuff to us. Players report things about other players. The refs will stop a game and say, ‘This guy doesn’t look right.’ That would have been unusual 25 years ago.

James Muntz, M.D., was interviewed by former TMC Communications Director Ryan Holeywell. The conversation was edited for clarity and length.