Mosavin speaks three languages and has lived on three continents 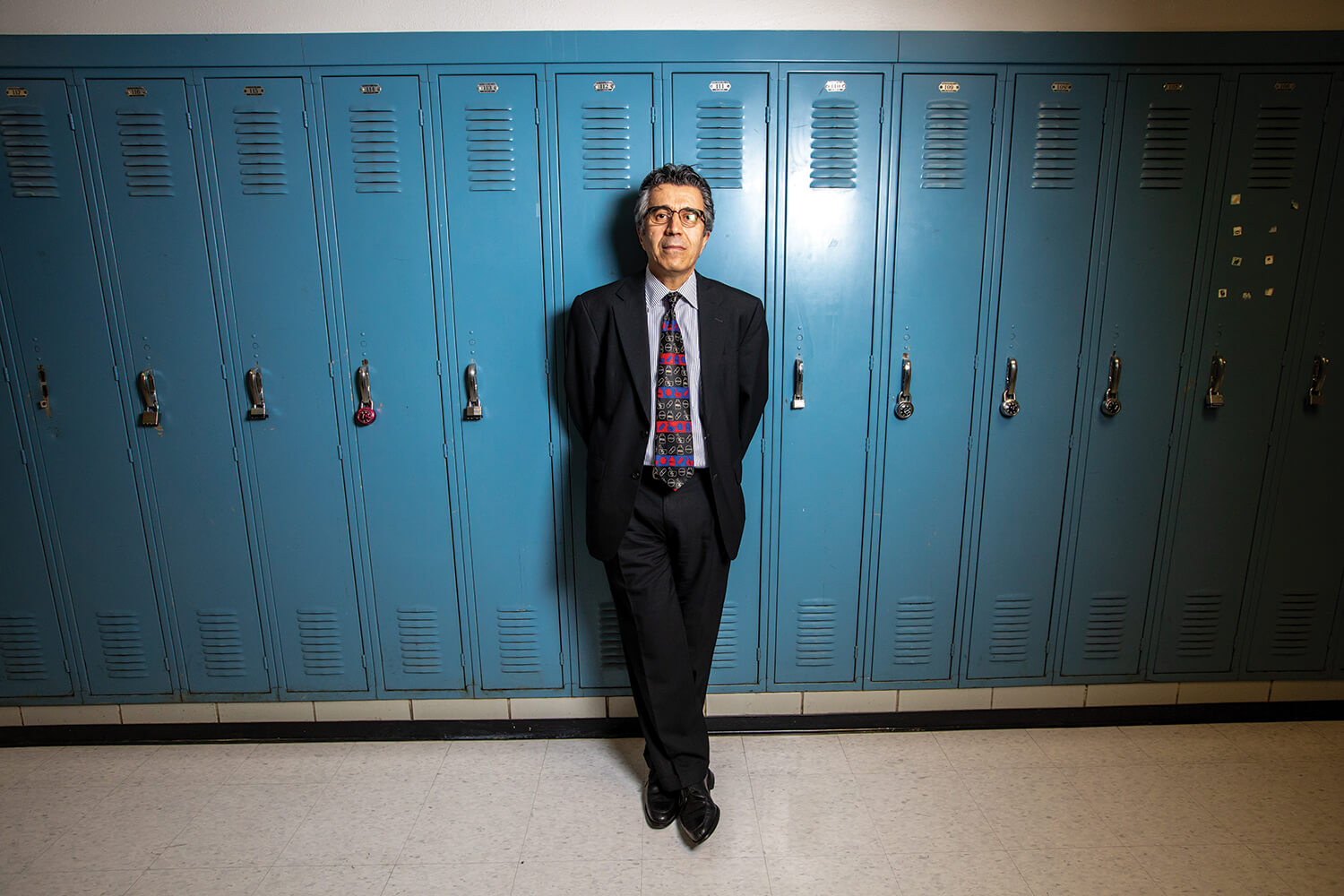 RASHID MOSAVIN, R.PH., PH.D., MBA, became dean of Texas Southern University’s College of Pharmacy and Health Sciences in June 2019. He came from California, where he was executive associate dean for the School of Pharmacy at Loma Linda University, but he has lived in many other places—both in the United States and abroad. An immigrant who speaks three languages, Mosavin is also a Buddhist who practices mindful meditation.

Q | Why did you decide to study pharmacy?
A | When I was in high school, I had this intense love for chemistry and biology. My parents said, if you love these two subjects and if you want to have a good career at the same time, go to pharmacy school. I tell my students that studying pharmacy is studying the actions and interactions of chemicals in biological systems. Think of your body. A tree. A dog. Each biological system works in harmony until something goes wrong and we have a disease—but when you add the right chemical, it alters what is happening and the issue is resolved.

Q | You received a bachelor’s degree in pharmacy from the University of Kansas, a Ph.D. in molecular pharmacology from the University of Wisconsin-Madison and an MBA from the University of Chicago. Is it safe to say your career took a few twists and turns before landing in academia?
A | After pharmacy school in Kansas, I worked for a few years and became very interested in pharmacology, with how drugs really work. I decided to study molecular pharmacology, which asks, Where does this drug actually go? Does it go inside of a cell? In the cytoplasm? The nucleus? What kind of receptors does it interact with? After my Ph.D., I did two years of postdoctoral research at the University of Michigan in gene therapy. I learned that gene therapy wasn’t really for me; I wasn’t happy doing all the laboratory research. Then I became interested in the economic side of health care, so I moved to Chicago to get my MBA and started my academic career. After Chicago, I saw an ad for a position in California—a brand new pharmacy school that had just opened at Loma Linda University. It was a blank page and just 200 miles from my parents, who had retired in Las Vegas. I was getting so sick of the winters in Chicago.

Q | You were born in Iran and you were a teenager during the turbulent lead-up to the Iranian Revolution in 1979. How did the deposition of the Shah and the rise of Ayatollah Khomeini, who became Iran’s top religious and political figure, impact you and your family?
A | I was a teenager when the tanks rolled onto the streets of Isfahan, the city in the middle of Iran where I was born. My mother, who to this day I thank, says, ‘Look. You’re a smart kid and you’re going to die here. There are tanks on the street. So this is what we’re going to do: You go to Paris to live with your aunt and your cousins. When the situation gets better, you come back. Go learn French. Go to high school.’ So that’s what I did. And after a few years, in April 1981, I moved to the United States. I was 19 and I did not speak English.

Q | So you never returned to Iran?
A | Never. Several years later, my parents left Iran and brought my younger brother, Ashkan, to the U.S. We all stayed here. My brother now does community pharmacy. I became an American citizen, I think, in 1992.

Q | When did you become a Buddhist?
A | I was raised as a Muslim, although mom and dad are very sort of liberal Muslims. Buddhism enters my life when I’m living in France. Buddhism is about, at the very fundamental level, using this instrument called mindful meditation to eventually become in control of your feelings. Instead of your feelings controlling you, you control them. That urge to honk the horn and get upset with the guy who just cut you off on the highway? You control that feeling.

Q | At this point, you’re a citizen of the world who has made a home in three countries on three continents. What are your essential survivor skills?
A | When you’re an immigrant, there are a couple of things you’ve got to do. The first thing is, you’ve got to integrate, which means you’ve got to speak the language. The second thing is, when you go to your new home, learn the traditions—respect them and do not criticize them. Just immerse yourself. Learn and appreciate. Don’t judge. 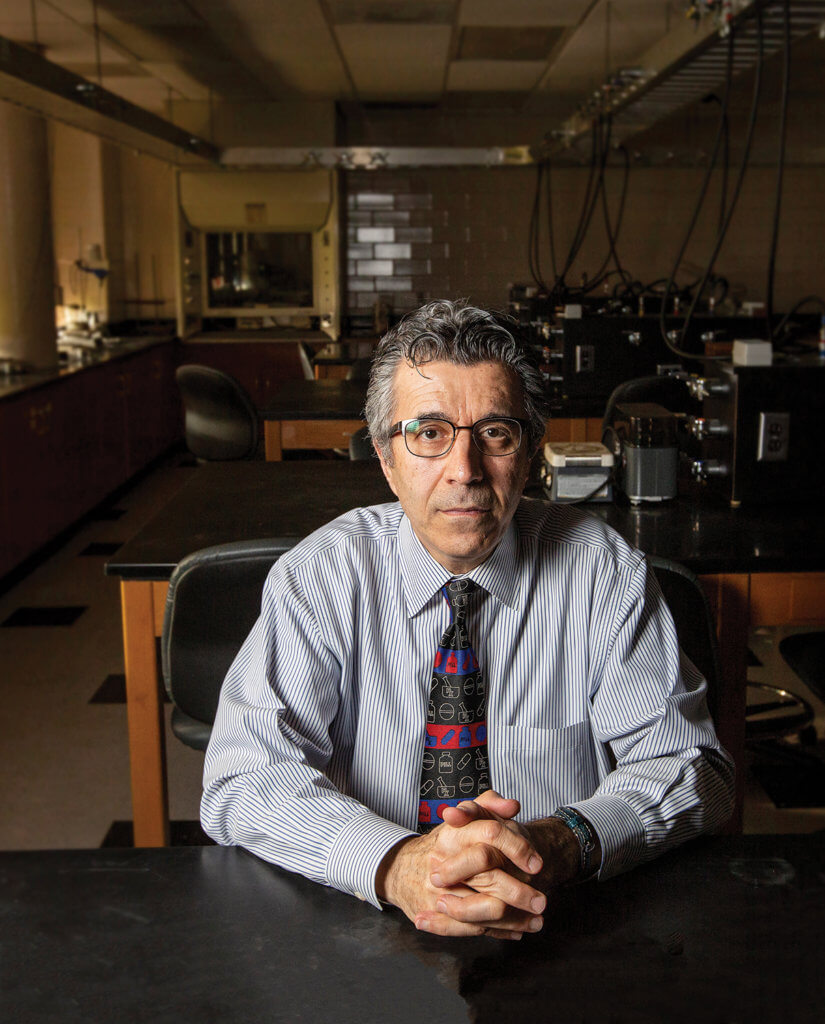 Q | Although you had other job offers, you decided to take the position at TSU as dean of the College of Pharmacy and Health Sciences. Why?
A | Part of the mission of TSU is to educate underrepresented minorities. I realized that if TSU offered me the position, I wanted to be here because the student population shares so much with the immigrant population. Most of our students fall into the category of not having parents who were able to put them though private schools or get them tutors. These students don’t have people who can financially support them, so many of them have part-time jobs while studying pharmacy. Some of them have full-time jobs.

Q | Did you work while you were in school?
A | I did. I had an afternoon job as a dishwasher and, on the weekends, I was a janitor when I was at pharmacy school in Kansas. It’s the same story.

Q | How does TSU’s pharmacy school rank nationally?
A | When it comes to students passing board exams and getting placed in residencies, we do well, but we’re not in the Top 10. So in coming here, I’m thinking, this is Houston. This is the Texas Medical Center. The vision for this school is in five years, TSU’s College of Pharmacy and Health Sciences is going to be one of the Top 10 pharmacy schools in the country. The fourth year of pharmacy school is all clinical training, and if you have the facilities you have here, bridges can be built.

Q | Are you the designated bridge builder?
A | Yes, I am. The national average pass rate for pharmacist licensure exams is about 90 percent. TSU’s rate is nearly the same, but our pass rate should be 100 percent. That’s what I tell the faculty. That’s what I tell the students. There are no excuses. You have the greatest community pharmacies in the medical center. A lot of our students go into community pharmacy, which is divided into big chain stores and independent ones. I love the independent ones because they’re owned and operated by pharmacists and the level of attention and care that you get is very different. But the main point is that we need to build serious relationships with all the hospitals around us. Everything we need is right here. In the next three to five years, we also need to be able to build a brand new building for the College of Pharmacy and Health Sciences, which currently operates out of two old buildings on opposite sides of our campus. We need a new building where we can all benefit from being housed together.

Q | By your estimation, who’s to blame for the opioid epidemic?
A | Everybody. Pharmaceutical companies. The physicians and pharmacists who are licensed professionals and are supposed to protect the public. I know the pharmaceutical companies pushed and pushed these drugs, but let’s not forget that the Board of Pharmacy in each state gives licenses to PharmD grads. The mission of all Boards of Pharmacy is to protect the public—that’s why you have to pass a test to make sure you are competent. When presented with a patient who is clearly in trouble, a pharmacist should say, just like my brother says in Nevada, ‘I’m sorry. You’re addicted. I’m not filling this prescription.’ And if the patient says, ‘I’m going to sue you,’ the pharmacist should say, ‘Go ahead and sue me. I refuse to fill this prescription.’ Pharmacists have the right to do that.

We had a tooth extraction, where I worked before, and the dentist wrote a prescription for 90 Vicodin—90 painkillers! I’m thinking, the American health system is broken. It’s not even a system; it’s a bunch of fragmented little silos that want to maximize profit. If this dentist had a real system, he would write for five Vicodin only. Your pharmacist would evaluate, give you the five and then he would call you in two days. But the dentist doesn’t want to see you and the pharmacist doesn’t want to see you. If I do an oil change at the Honda dealership, I get a call the next day asking, ‘How was the service?’ But if I fill a prescription in a drugstore, no one ever calls me.

Q | As you look toward the future of prescription drugs, what do you worry about?
A | I think a lot about infectious diseases. We use so many antibiotics—both in humans and in animals. Thousands of antibiotics are mixed into the feed of cows and chickens; we are setting the stage for multidrug-resistant bacteria. There will be a day, I think, when people get infected and we’ll have nothing to treat them with. Nothing. Because we did this to ourselves. I tell my students, this is like a fast-paced evolution right in front of your face.

Q | You like to tell pharmacy students that they should practice pharmacy the same way B.B. King and Carlos Santana play the blues. Can you unpack that comparison?
A | I met both of them at different times. [B.B. King died in 2015.] What I mean when I say that is I want students to give 100 percent effort. When you see these people play the guitar, you understand they’re not just there to play because they’re going to get paid at the end of the night. Their entire heart and soul is in it. I’m saying, immerse yourself in the study of pharmacy. Immerse yourself in taking care of patients, because this is who you are. It’s kind of like when I immersed myself in French and then English. Don’t just do pharmacy halfway. Don’t do it for money. Do it deeply from your heart.

Q | What do you and your wife, Darlene, do for fun in Houston?
A | We like to go to Memorial Park with our dogs. I’m an avid red wine drinker and we like to go to Cru. When I go to Cru, it’s like the old “Cheers” show on TV. ‘Hey dean,’ they say. ‘What are you drinking tonight?’ They know who I am and who my wife is. In California, we lived 67 miles east of Los Angeles. Over 15 years, we went to only two shows at the LA Philharmonic—to get into L.A. and back is a nightmare. We’ve been in Houston seven months and we’ve already been to the Houston Symphony four times. It’s two miles from where we live; the Uber to Jones Hall is $9.

Rashid Mosavin, R.Ph., Ph.D., MBA, was interviewed by Pulse editor Maggie Galehouse. The interview has been edited for clarity and length.