Native Houstonian, acclaimed curator and art scholar has been leading the institution since 2012 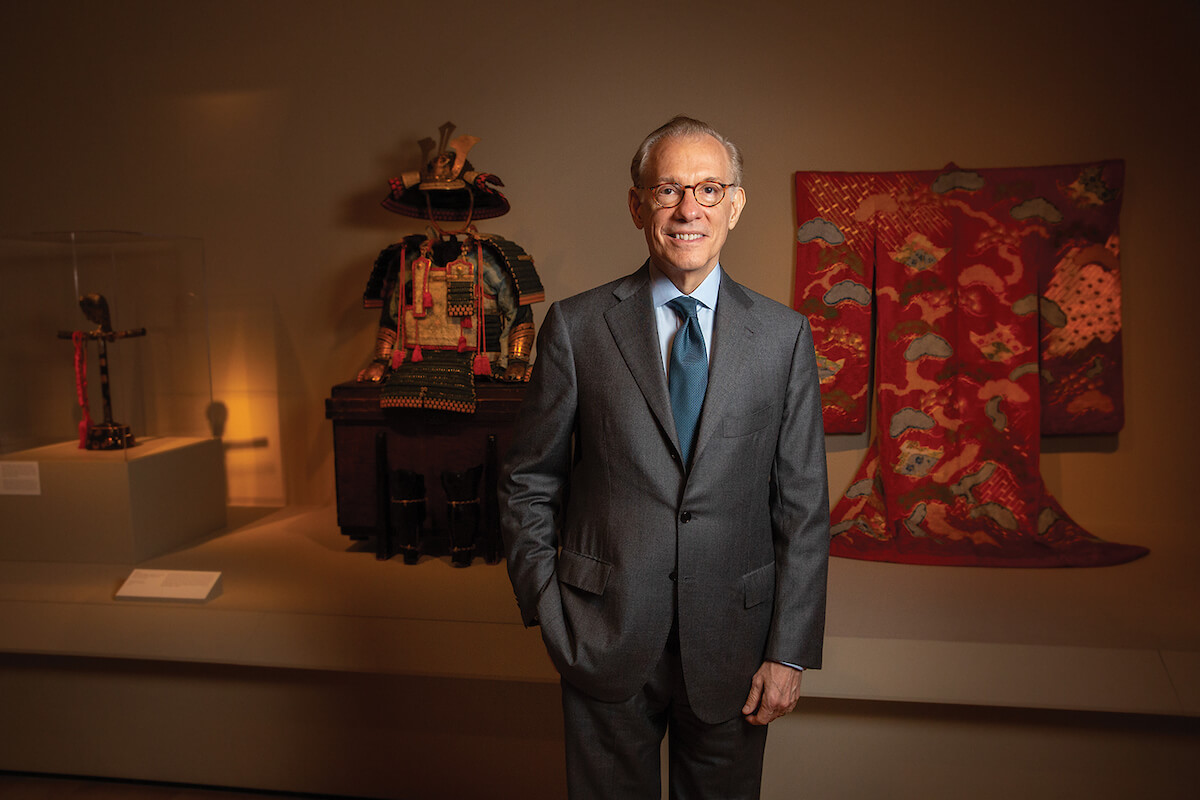 Native Houstonian, acclaimed curator and art scholar Gary Tinterow has been leading the Museum of Fine Arts, Houston for almost eight years, overseeing the campus redevelopment set to be completed by the end of 2020. A Harvard University graduate, Tinterow made his way back to his hometown after nearly three decades at the Metropolitan Museum of Art in New York City.

Q | What was it like growing up in Houston and what was it like to return after 40 years?
A | Houston in the 1960s and ’70s was an exciting environment. I went to great public schools—Pershing Middle School and Bellaire High School—and what was especially attractive to me was that the city was booming. I’m deeply interested in architecture and I could see all of those great buildings going up downtown. We had a great symphony, wonderful opera and ballet, Broadway musicals coming through town—everything felt accessible. I remember going backstage and telling André Previn what I thought about his performance at the symphony when he was conductor. If I had grown up in New York, I probably would not have been admitted backstage to tell André Previn what I thought as a high school student. Years later, when I was a professional and curator at the Metropolitan Museum of Art (the Met), when people would find out I was from Houston, they would ask with some surprise, ‘How did you become who you are growing up in Houston, Texas?’ I would say, ‘I am who I am because I grew up in Houston, Texas.’

Coming back, Houston has grown enormously in the 40 years I was absent and it has improved in every dimension. It’s much more diverse. It’s much larger. The city has also become more affluent and that affluence has made more opportunities. Houston Grand Opera is now a world-famous opera company. Our ballet is spectacular and our symphony continues at a very high level. The Museum of Fine Arts, Houston (MFAH) has grown enormously. But it is also a continuation of that same can-do spirit and desire for excellence and a sense on the part of our city leaders, philanthropists and cultural leaders that we should have the very best here in Houston.

Q | You built your career at the Met, where you became chairman of the department of 19th-century, modern and contemporary art. In 2012, when you returned to Houston to become director of the MFAH, what lessons and experiences did you carry with you?

A | While I was at the Met, I was able to enjoy an extraordinary environment that was dedicated to and focused on excellence—excellence in programs, excellence in acquisitions, excellence in scholarly publications and production on the part of the staff. I think I brought those high expectations with me back down to Houston. At the same time, those years at the Met enabled me to develop relationships, friendships and contacts with museum professionals, collectors and artists around the world. I’ve been able to maintain those here and bring some of those relationships to Houston in order to further our mission.

Q | The MFAH has changed dramatically under your leadership. Why was that change necessary and what is to come in the future?

A | I was hired at this great moment here at the museum. I was hired specifically to fulfill the many plans that my predecessor, Peter Marzio, had in place. For the last 10 years we have been buying modern and contemporary art without galleries to display it. Before I came, the trustees acquired land across the street—the north side of Bissonnet—on which we could build something. With the constant acquisition of modern art prior to my arrival and since my arrival, and with the desire on the part of our trustees to find and to build a new facility, we will be opening the Nancy and Rich Kinder Building, designed by Steven Holl, on Nov. 1, 2020. Since I have been here, we will have created the new Glassell School of Art building, two garages, a conservation center and, soon, the magnificent Kinder building, all within the 14 acres of the Susan and Fayez S. Sarofim Campus. I don’t consider it my accomplishment; I consider it the community’s accomplishment, as well as the board of trustees. 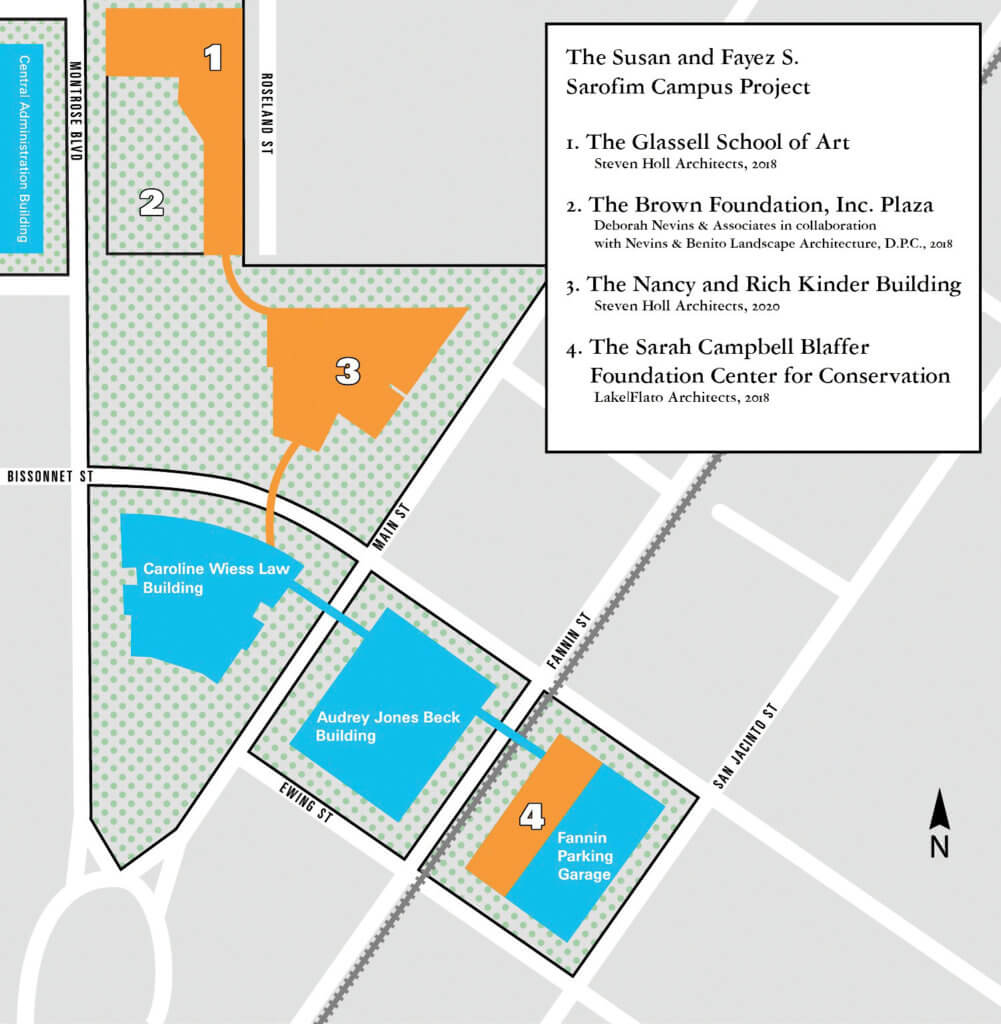 Q | The architectural design of the buildings that now make up the MFAH are quite different. What is the thought process behind the aesthetic of the new buildings and how do they converse with the older buildings?

A | I think the architects very much wanted to create complementary contrast. We have the black steel of Ludwig Mies van der Rohe in the Caroline Wiess Law Building, the limestone of Rafael Moneo in the Audrey Jones Beck Building, the white glass and concrete of the Glassell School of Art designed by Steven Holl Architects. I think everything was meant to provide contrast, but with some careful modifications in order to defer to the existing monuments we have. You will notice that the Kinder building curves and adopts the same curve on Bissonnet as the van der Rohe building. The scale of the building—the way it is cut up into pavilions—again helps integrate a very large building into our existing campus.

Q | The MFAH benefits greatly from philanthropic donors. Where would the museum be without them?
A | We would be nowhere. Less than 1.5 percent of our finances are contributed by the city through the hotel tax—everything else is private philanthropy. The endowment is a result of private gifts, annual fundraising, admissions revenue and memberships. But 75 percent of the budget is a result of Houston philanthropy. Of the big city museums—Chicago, Boston, New York, San Francisco—they often receive a sizable portion of funds from the municipality. But of the major American museums, we probably have the smallest contribution from the government, but the largest contribution from the philanthropists in the community. We depend on the kind- ness of our family and of strangers, so that means we have to continue integrating ourselves within the community and providing programs that the community finds compelling so the community will continue to support us. To me, our success with fundraising is a report card on our success with programming.

Q | The MFAH is committed to making the museum accessible to individuals of all ages, walks of life and abilities. Why is inclusiveness so important to you and your team?

A | It is our primary mission and focus to make this a place for all people—all colors, religions, all ages, all abilities. We work as hard as we can to improve. We are by no means perfect, but every season or every year we might focus on a different community. “Peacock in the Desert,” for example, a 2018 exhibit of royal treasures from India, enabled us to address our Indian and Hindu community here in Houston. It is very exciting for me to work on these types of projects, meet people from other parts of the world, engage in partnerships and then bring those projects here. Sometimes visitors will come back again and bring their children and grandchildren, and some- times the children will bring their grandparents. And for people who are challenged one way or another—physically or mentally—we find, and research shows, that art and a visit to the museum can be tremendously helpful, consoling, encouraging and inspiring.

Q | How many people visit the MFAH each year? Is that number on the rise?

A | Last year we counted, in all of our different facilities, 1.25 million pairs of feet. Sometimes the feet belong to the same person. That is an all-time record and we won’t have that many this year. It was because of the van Gogh exhibit and we will probably go back to our norm in 2020, which is a million.

Q | What are your favorite things to do in Houston when you’re not working?
A | I get my exercise at Rice in the mornings and most nights I like to ride bikes with my partner of 16 years, Christopher Gardner, and do the dog run with our dog, Beau. If I want to just do something different—in a sense be by myself, but with people—I go to Central Market. I love just looking at the food, looking at all of the different products from all around the world. It is a kind of travel for me.

Q | Tell us a bit about Beau.
A | Beau is a greyhound. We’ve had four grey- hounds in a row. In the history of art, I think the greyhound is the breed most frequently depicted. You see them on ancient Greek vases and ancient sculptures. You see them in Chinese paintings early on, Islamic art, European art, Medieval art. They are just such a beautiful dog because of their unusual formation. The greyhound line goes from the Anubis in ancient Egypt all the way to the modern greyhound today, essentially unchanged. That is exciting to me. I just love traveling through museums around the world and seeing greyhounds in art.

MFAH director Gary Tinterow was interviewed by TMC Pulse columnist and writer Britni R. McAshan. The interview has been edited for clarity and length.