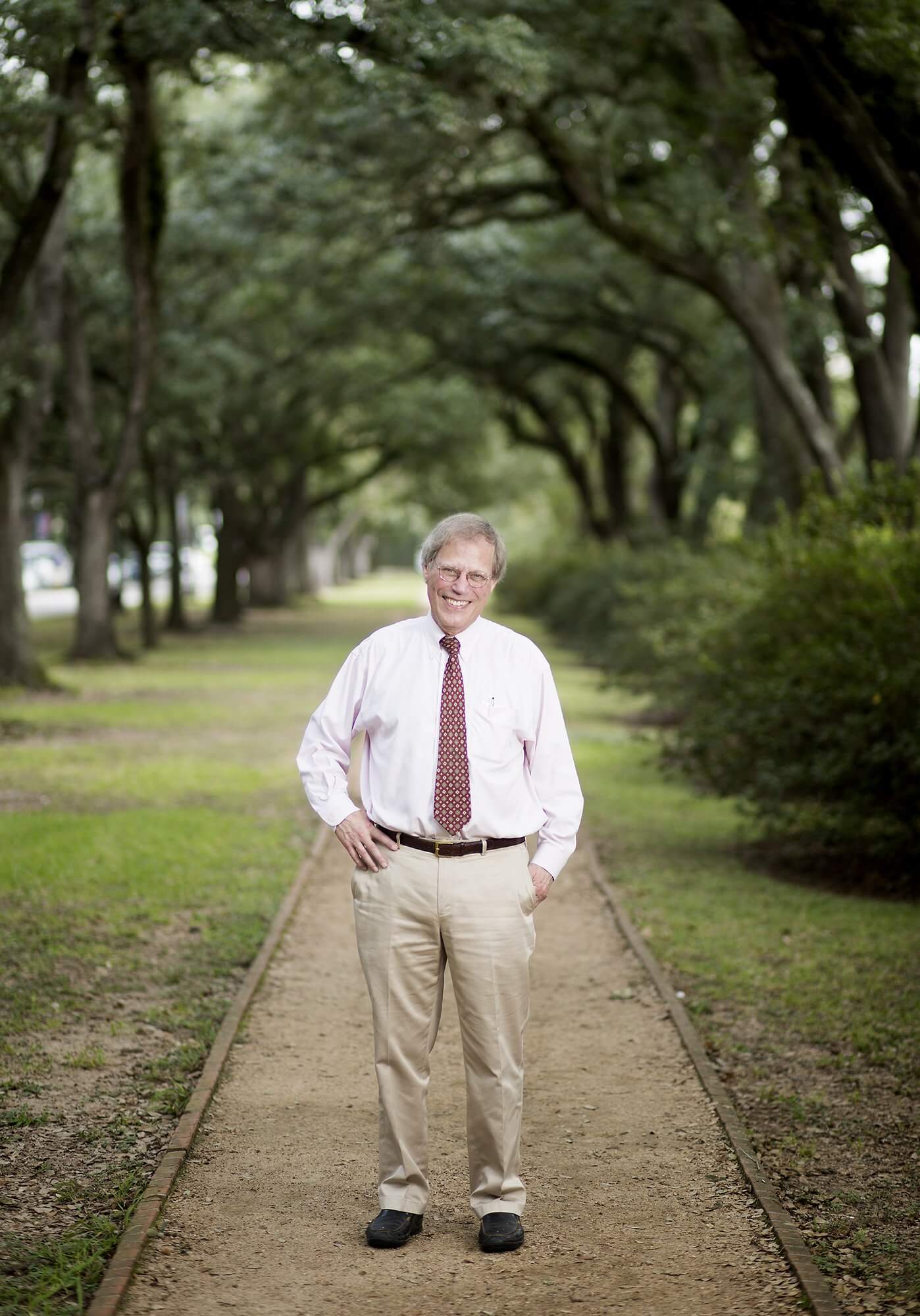 STEPHEN KLINEBERG, PH.D., is a professor of sociology at Rice University and founding director of the Kinder Institute for Urban Research. In 1982, he and his students launched the annual Kinder Houston Area Survey to track shifts in demographic patterns, economic outlooks, beliefs and experiences of Harris County residents. Klineberg will publish a book in 2019 about this ongoing research.

Q | You were raised and educated in the Northeast, earning your Ph.D. from Harvard University. What brought you to Houston and why have you made it your home?
A | Rice University brought me here, initially. When I came in the ’70s, I didn’t like Houston very much. It was a very business-dominated city. Everyone was congratulating themselves on how much money they were making in the oil business, with no attention being paid to public spaces. So what if it’s ugly! Who cares if it smells! It’s the smell of money! But Rice was wonderful. My wife was finishing law school, so we said we’ll come for a couple of years. And then I got to like Rice more and more and I got to like the city better—and it turned out to be a fascinating and consequential city in America with the collapse of the oil boom and the recovery in the 21st century.

Q | Why did you launch the survey in 1982 and why have you continued to do it?
A | It was a one-time survey; it never occurred to us to do it again. I was teaching a research methods class to sociology majors and I do survey research, so I thought, I’ll have them get their hands dirty. Houston was this booming metropolis with growing concerns about traffic, pollution, crime. What kind of city are we building with all of this affluence? I figured, let’s do a survey on the social costs of growth. What happens to all of the other aspects of life when your total commitment is to make as much money as fast as you can? We did the survey, analyzed the data and it showed some very interesting kinds of patterns. And then two months later, the oil boom collapsed. One hundred thousand jobs were lost in Houston by the end of 1983, in a city that had known nothing but economic boom from its beginning. So we said, we better do this survey again.

Q | Are there any significant changes the survey has charted over the past 35 years?
A | Two things have changed. One is increasingly positive attitudes toward immigration and diversity, and the other is increasing support for gay rights. We can now ask the question: Did that change occur because people changed their minds, or is it because new, younger folk are coming into the world with different views than us older folk? And we can answer that question because we have been asking these questions since the ’90s, so we can follow the baby boomers. And the answer is they have not changed their minds. They see those things the same as they did 20 years ago. What has changed dramatically is younger Anglos coming of age in the last 10 years are experiencing a different reality than us old Anglos who came of age in the ’60s and ’70s.

Q | How is the survey conducted?
A | We do the survey over the phone. It is a random sampling of Harris County residents. We weight the data at the end, because we know the percentage of African-Americans, Latinos and Asians in Harris County. We know levels of education, we know ages from the census, so we can weight the result. No matter what we do, we are going to oversample older Anglos who are at home and happy to talk to you, and miss out and undersample younger Latinos who are more likely to have cell phones. So you weight the data. You get a little extra weight if you are Latino and young. And the overall picture comes out to be very close to what you would expect it to be.

Q | Technology has changed a lot since you started this survey. Has that made collecting data easier or more challenging?
A | It was a whole lot easier 30 years ago. Everybody had landline phones. It was none of this caller ID or answering machines. The phone rings, you answer the damn phone! We were getting 80 percent response rates. But now, the response rates have gone down dramatically, not because people refuse to answer the questions, but because they refuse to pick up the phone for anybody. The response rates have dropped to 30-35 percent.

Q | After analyzing the results of the survey, how do you think Houston could improve?
A | All of the growth after 1982—after the collapse of the oil boom—has been the influx of African-Americans, Latinos and Asians. And this biracial, southern city dominated by white men has become the single most ethnically diverse city in the country. If Houston is going to make it, we all understand it has got to become a destination of choice, a place where the best and the brightest people in America who can live anywhere will say, ‘I want to live in Houston, Texas.’

Q | How have the city’s shifting demographics impacted education, the economy and the workforce?
A | We are in the midst of an epic transformation, where 76 million babies who were born in that incredible period after World War II have been this bulge rattling through the American system. The leading edge of those 76 million babies turns 71 this year, and we are going to watch a literal doubling of the number of Americans over 65 every day between now and 2030. And they are being replaced by a very different generation. Instead of being an amalgam of European nationalities, we will be a microcosm of the world—nowhere more clearly seen than in Houston.

We are isolating African-Americans and Latinos in inner-city, inferior schools with far fewer resources than rich kids. And it starts at birth. One of the moments of truth in education is third grade reading. If you are not reading at a third grade level in third grade, you are four times more likely to drop out of high school. And the single most powerful predictor of a third grade reading level is if you started kindergarten ready to learn to read. Rich kids start kindergarten one to two years ahead of poor kids, and that gap continues to grow. I think that is the great question mark for the future of Houston. Will we invest in universal preschool—cradle to career?

Q | Do you plan to conduct the survey indefinitely? Is there a cutoff point?
A | No cutoff point. I could imagine as I begin to retire, we could bring someone in and we could work together and then they’d pass it over to him or her. I can also imagine having the survey once every two years because changes occur, but they don’t occur that rapidly. I think as long as there is a Kinder Institute, there will always be something like this because it is such a valuable snapshot of where we are. The head of the Greater Houston Partnership told me once that these surveys have put the business community 10 years ahead of where they otherwise would have been because you can clearly see the realities that would take much longer to appear if you didn’t have the data to just yell at you.

Q | Based on your data, what sort of impact has the Texas Medical Center had on Houston?
A | The Texas Medical Center is really the great asset that Houston has and it is really the great surprise. We knew about oil and gas, we knew about the port, but the medical center? It has been fascinating to see a city reinventing itself in a variety of ways, recognizing that our location near the East Texas oil fields that accounted for everything in Houston’s prosperity in the 20th century will account for less and less and, eventually, for zilch in the 21st century. The Texas Medical Center is a critical piece of Houston’s future. If Houston wants to become the third coast for life sciences, it has got to make the investments that will make that possible. Houston has been at the center for the treatment of diseases, but it has not been at the center for the development of new technologies. The hope is to really transform Houston from a place focusing on natural resources to a place where the source of wealth is knowledge.

Q | You founded the Kinder Institute for Urban Research in 2010 with the support of Nancy and Rich Kinder. How did it come about?
A | The Kinder Institute came out of the surveys. Houston was increasingly recognizing the value of having this record of time and change, and we thought it was important to have a home for it. We developed the institute and it combined my work with the work of my colleague, Michael Emerson, Ph.D.—now provost and professor of sociology and urban studies at Chicago’s North Park University— who was running the Center on Race, Religion and Urban Life at Rice. We formed one center that, among other things, would provide a permanent home for the Houston Area Survey. We figured it would take 10 years or so to establish the endowment, and the Kinders, bless their hearts, came through and supported us.

Q | 2017 was a pivotal year for Houston. We got through Hurricane Harvey and then the Astros won the World Series. What are the major issues the city must face in the coming decades?
A | The last time we were in the World Series, we lost all four games to the White Sox. It was absolutely embarrassing. And now here we are. There are also dramatic differences between that game and now, in what there is to do in the city and its attractiveness.

In Houston, we have got to live with water. We have to control that water and work with it. We have to stop building houses in areas that we know are prone to flooding, insist on retention ponds, and we need to build a third reservoir.

Houston has no prayer of being a major city in the 21st century if it is perceived by people outside of Houston to be not only flat and hot for much of the year, but also ugly and dangerously polluted. The beauty of dealing with flood control is that it means that we need more parks and more green space. The Bayou Greenways initiative, which aims to develop connected green corridors with hike and bike trails along the bayous of the greater Houston area, is also a flood control mechanism. So there is a lot of opportunity to create win-win situations, but only if there is a deliberate realization that we cannot leave it up to developers to decide how they want to build and maximize their profits.

Q | What will Houston look like in 100 years?
A | It will be much bigger. We expect another 3 million people will move into the Houston metropolitan area in the next 20 years—another 1 million into Harris County. It will be less diverse because it is going to be much more Hispanic. We may be as diverse as we are going to be right now. Although, what I do think is going to happen in 100 years is that it will be irrelevant— no one will think about ethnicity. There is not an ethnic divide in Houston that needs to be addressed. There is a class divide and that is going to be the great question. I think we can solve this question, but will we?