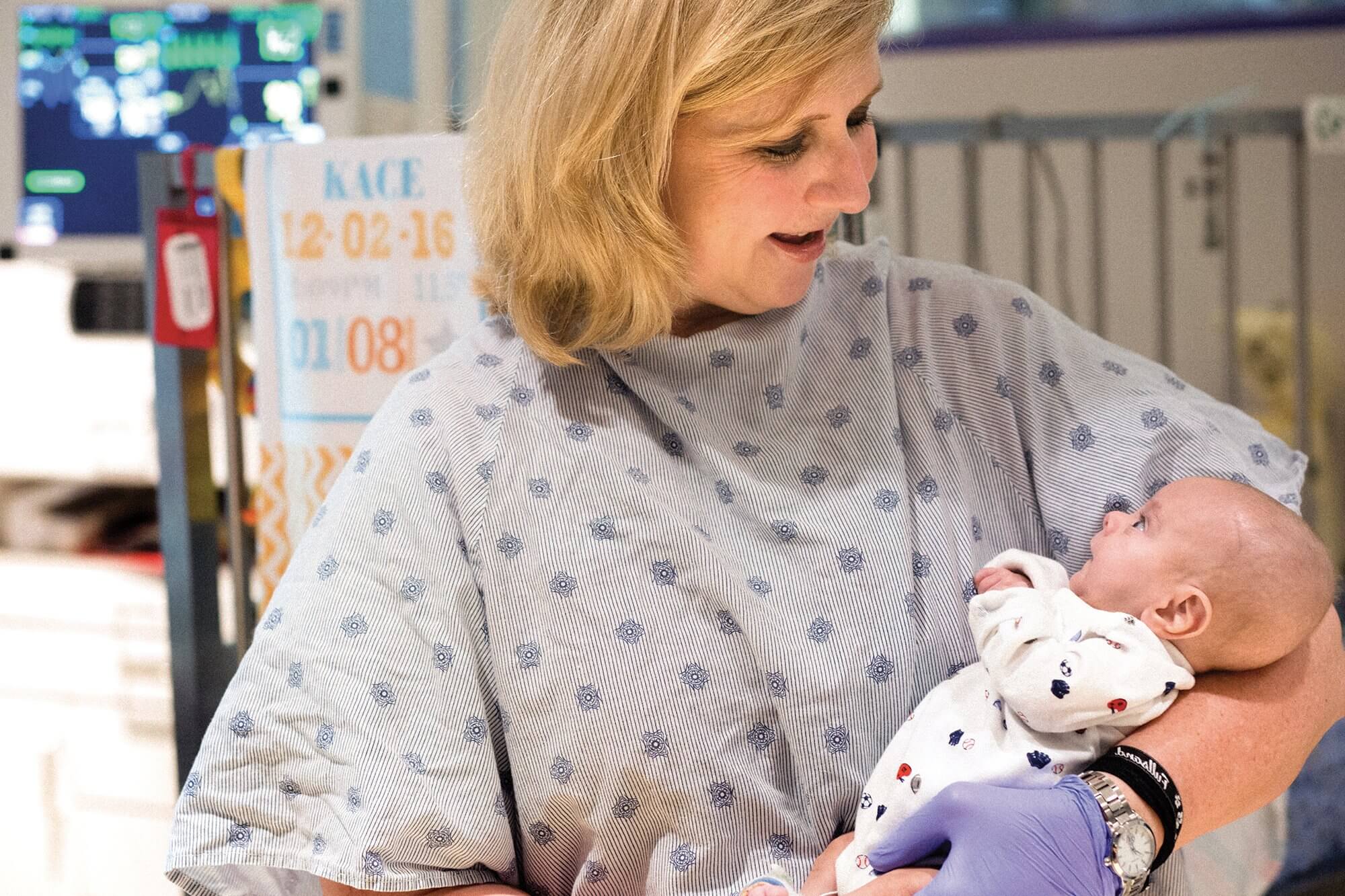 As heart and respiratory monitors beep around her, Teri Walker paces the floor of the level 4 neonatal intensive care unit at Texas Children’s Pavilion for Women.

She’s listening for agitated cries from the babies. When one begins to fuss, she picks him up and cradles him in her arms, carefully maneuvering around the slack cables and tubes attached to his tiny body. Smiling warmly, she begins to rock him from side to side, whispering lines from songs and nursery rhymes she knows from her 25 years as a kindergarten teacher.

“Twinkle, twinkle, little star. How I wonder what you are,” Walker sings softly, gazing into the baby’s eyes.

Walker, who retired four years ago, spends three hours in this NICU every Tuesday and Thursday as part of the Texas Children’s Baby Holding Program, a popular program with an extensive waiting list. As one of the 89 volunteer baby holders, she plays a critical role in the babies’ development by providing one of the most basic human experiences.

“It just seemed like that was the gift I was given—to be with children,” Walker, 52, said. “I’m a part of their healing.”

Children’s Memorial Hermann Hospital and The Woman’s Hospital of Texas are among area institutions that offer similar volunteer programs.

Cuddling NICU babies is an important nonpharmacological therapy that has been shown to ease their pain and decrease their length of hospital stay.

“It’s really vital because their circulatory systems and their ability to breathe can easily be compromised if they’re stressed or crying a lot,” said Jill Konieczny, child life specialist in the Texas Children’s NICU. “It’s really important to keep those babies calm so that their little hearts don’t have to work so hard.”

Babies are transferred to the NICU for a variety of conditions. Some are born prematurely, while others are treated for infections, physical anomalies, feeding issues, breathing problems and other issues, such as neonatal abstinence syndrome. But regardless of their diagnoses, cuddling helps stabilize vital signs, lower heart rates, reduce chronic lung problems and promote better feeding.

“That baby experiences different treatments, assessments and procedures throughout that day, so to provide that positive touch—that cuddle experience—really helps the psychosocial development as they learn to connect with the people around them, learn to feel safe and trust their environment,” Konieczny said. “It plays a huge role in their ability to form healthy attachments along the way.”

Volunteers are trained by child life specialists, who teach the proper ways to hold a baby, the benefits of holding, how to soothe a baby, the infection control process, and more.

Because the transition from the bed to being held can be anxiety-provoking for some babies, volunteers are encouraged to allow at least 30 minutes for babies to calm and settle before returning them to their cribs. It can take anywhere from half an hour to two hours of cuddling, rocking and singing to soothe a baby.

“It really is a labor of love,” Konieczny said. “We definitely have babies who, no matter what you do, what you try, how you position them, they’re just not having a good day and may not be consolable.”

When babies are inconsolable, Konieczny said the best thing to do is put them back in their cribs and let the nurse assess if there’s an underlying issue that’s causing the agitation or if medication needs to be adjusted.

While the volunteers provide a nurturing experience for the infants, their presence in the NICU helps the families who are separated from their babies, as well, said Texas Children’s neonatologist George Thomas Mandy, M.D. Because parents may not be able to spend the whole day with their babies in the NICU, volunteers can provide comfort and gentle touch in their absence.

“If somebody just gets transferred to the Texas Children’s NICU from out of state, for example, then the parents may have difficulties being with the baby,” Mandy said. “That’s where the volunteer group comes in and provides support by holding these babies and facilitating the babies’ development for them. This is very important.”

Volunteers in the cuddle program know that nurturing and affection can help get the babies home sooner.

“There are some who have been there for a long time, and then you’re just so grateful that they’re well enough to finally go home,” Walker said. “Hopefully, I’ve made a difference.”