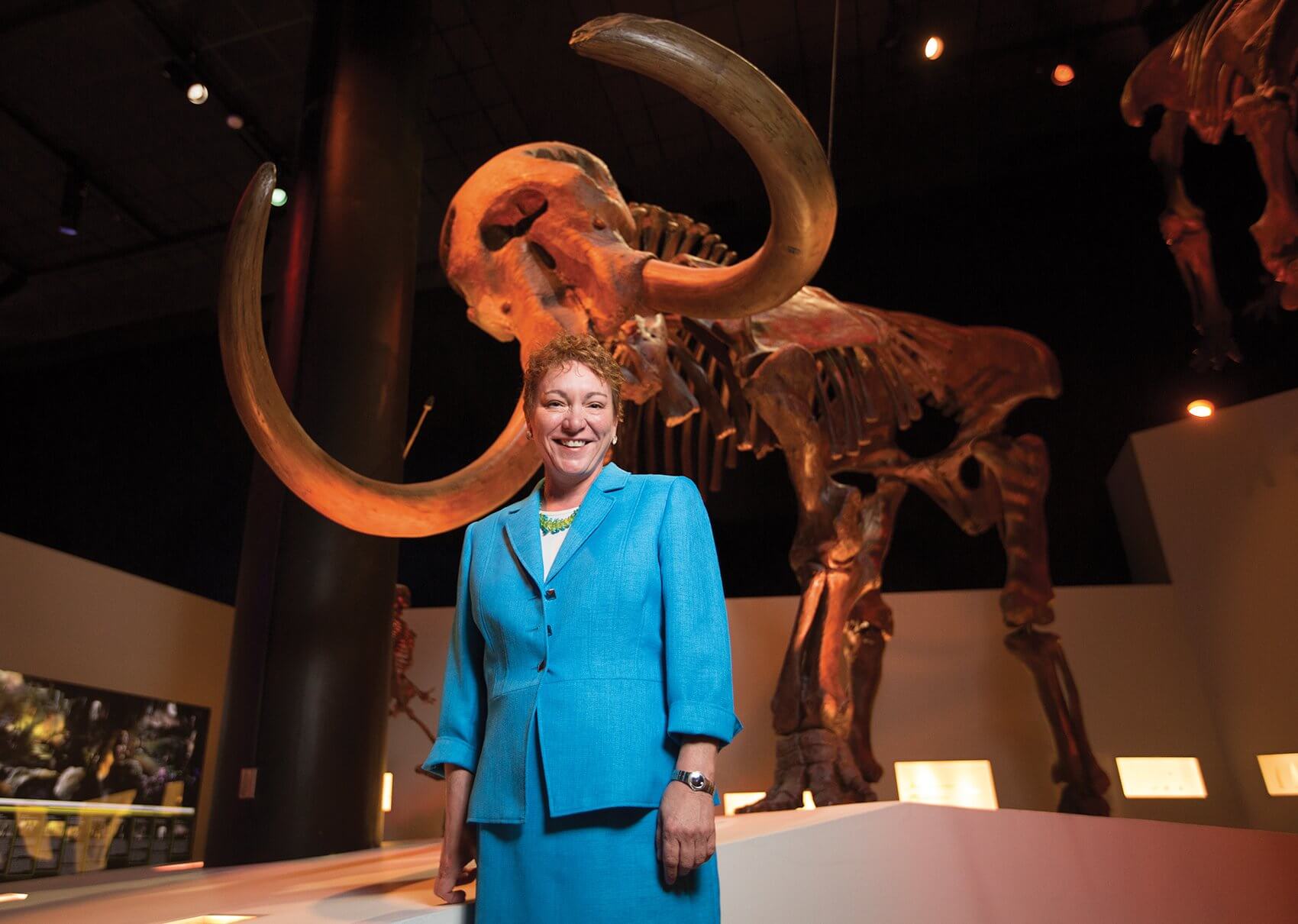 Julie Farr, executive director for the Houston Museum District, sat down with William F. McKeon, executive vice president and chief strategy and operating officer of the Texas Medical Center, to talk about the city’s expansive offerings in visual arts and how increasing collaboration between museums and health care facilities will benefit residents and visitors alike.

Q | I understand you are from Pennsylvania?
A | Yes. I’ve lived in most parts of the state, and most recently in Pittsburgh before I came to Houston.

Q | What brought you to Houston?
A | The Houston Center for Contemporary Craft (HCCC). I’ve had the typical, convoluted career path of a nonprofit arts administrator and was on a board in the Pittsburgh area when the director of the Society for Contemporary Craft, which is a counterpart of HCCC in Pittsburgh, turned to me one day and said, ‘I’m thinking about retiring. Are you interested in this position?’ I had been in that job maybe two months when the headhunter for HCCC called to see if I would be interested in coming to Houston, but it wasn’t the right timing. However, the person they did bring in ended up having to move out of state a year later. The headhunter remembered me and called when it had been well below freezing in Pittsburgh two weeks straight. It was snowing nonstop and I was daydreaming about playing golf, and I thought, ‘I’ll talk with Houston.’

At the Houston Center for Contemporary Craft there are regular exhibitions, usually three varying at a time. What’s really dynamic about it is the artist residency program. There are five open studios where visitors can walk in and see an artist at work. Visitors can talk to them, watch and touch their work. It’s a highly competitive program now. What I really loved about it is that the majority of the artists come from outside the area. Whenever possible, they stay in Houston because they can find jobs; they’re filling the teaching positions; they’re buying their first houses.

I was at a meeting the other day at a corporate office downtown and the work on the walls was by one of our former resident artists—that is wonderful to see.

Q | How did that role prepare you for becoming the executive director of the Museum District?
A | As a member institution of the Museum District, every executive director or CEO serves on the board of the district. Through my role at the HCCC I had a lot of familiarity with the district. I had chaired the Policy Committee and worked on the PR & Marketing Committee. When the previous director left, I filled in as an interim director. After a series of days where I was having conversations with independent artists, with big organizations, with people in between and with the neighborhood groups, I thought, ‘I’m the connector in this. This is what I should be doing.’

Q | I think the Museum District is one of Houston’s greatest assets. How would you describe the Museum District and all that it has to offer?
A | I’d say it is made up of 19 member institutions covering all disciplines in visual arts. Even the Houston Zoo, they consider themselves to be preserving a collection. There is a geographic footprint of a mile and a half around the Mecom Fountain. What’s unique about it and what unites it, is that the Board of Directors—the chairs and the CEOs of these institutions—all sit down at the same table. You have the two-person mom-and-pop organization next to the largest organizations. There’s a lot of support for each other, there’s a lot of unity and a lot of awareness about preservation of funding.

The Museum District itself is divided into four walkable zones, with the Menil campus being one. The most spread out zone goes from Buffalo Soldiers in the north to Lawndale in the west and down to the Holocaust Museum. Then in the summer, zone three showcases the Contemporary Arts Museum, the Museum of Fine Arts and The Jung Center. So people are walking in a smaller area in the heat. And then the fourth zone is Hermann Park and its neighbors.

Q | How has the Museum District evolved over time?
A | In 1997, the district was formed with 11 institutions, and they’re considered the legacy institutions because of that. They were the initial group of museums receiving hotel occupancy tax funding. Then, over time, other organizations have come in. Many of those apply to the Houston Arts Alliance for grants, which is also the hotel occupancy tax fund. It’s been interesting to see the growth. Recently, we’ve had Asia Society come onboard, and Buffalo Soldiers has moved in, too. There are also a lot of expansions going on.

We are in a five-year contract for funding from the hotel occupancy tax through 2018. The hotel tax is state legislated and flows through the city—it isn’t technically city funds. Unfortunately, Houston ranks last compared to other large cities with per capita funding of $7.27. This means that out of every dollar collected, seven cents goes to support the arts. The average of the 10 largest cities is $19 per capita and the highest is $37, which is in Seattle and Portland. Different cities fund their arts programs differently. Four of them are through a hotel tax, and four are through a sin or sales tax, and then others have strong corporate support.

Q | What are some of the goals you hope to accomplish in this role?
A | My goal is for the Museum District to be front and center in the conversations that are going on; whether it is Hermann Park and their 20-year plan, with the Medical Center growth, and in regard to what Midtown is doing with their cultural designation. We’re in this dynamic corridor and I’d like for us to be a unifier and help all of these groups. We’re in the Museum Park Super Neighborhood Association, in South Main Alliance and Rice University. If we can help unify the messages and what, as a whole, the area would like
to accomplish, then we’ll be better prepared for our city’s growth.

Q | Tell me about your impression of Houston.
A | I’ve been in Houston for almost nine years now. Up north, and maybe it was because we were in a rust belt area, if you threw an idea on the table, you’d get all the reasons why you couldn’t, shouldn’t, won’t, don’t—all the negatives. Here, you throw an idea on the table and people say, ‘Oh, let me help you.’ I have
a funny story about that. Early on, we had an idea to recruit a high-profile person as a chair for a special event. Staff was a little hesitant about it. They said, ‘How would we get to this person?’ That conversation was on a Wednesday. That Friday night, I’m out at an opening reception, and I said to someone, ‘How do we get to this high-profile person?’ They said, ‘Oh, you call so-and-so.’ At the time, I was doing the breakfast meeting speaking circuit and someone asked me what I liked about Houston. I told that story and afterward, a woman came up to me and said, ‘Now if that doesn’t work out for you, my husband was his fraternity brother. You just call me.’

So that’s what I’ve found. If you come in and embrace Houston, it embraces you. Also, the food and the arts are fabulous. When I was researching coming here, that was one of the things I looked at. Houston, Boston, Los Angeles, New York and Pittsburgh are the only five cities in the country that have resident symphonies, operas, ballet—and then of course the visual arts and the theater arts are exceptional.

Q | What does a normal day look like in this role?
A | When you’re running an organization, a normal day is usually pretty chaotic. You wear a lot of hats. You switch them on and off very quickly. This is a much different pace. It’s really nice to have time to consider things and have time to write well. What’s very important to me is to get out to our members, talk to people. If we’re a presence, then we’re involved in the conversations that all of our institutions need to know about.

Q | What are your thoughts about how we can better integrate the arts into the TMC?
A | So, in these conversations about connectivity, there are perceived boundaries, and the question is, ‘How do we break those barriers?’ Whether it’s visually, whether it’s pedestrian, whether it’s just a perception of a boundary. I think the bike share program is a good start. If we can get a message out that we are working together and that there is opportunity to get from one place to another without getting in a car, I think that will go a long way toward that.

Another thing is just simple exposure. The Convention and Visitor’s Bureau is working on an app for the Super Bowl that will hopefully launch in December. The hope is that it will do virtual 360-degree tours that patients and families can easily access.

Q | How does the Museum District manage the programming of the 19 museums? Are their exhibits coordinated, or do they compete for the same audience?
A | That is a good question, and I would say the competition is minimal. There are 6.5 million visitors to the Museum District every year; that is such a big pool that I don’t see it as a competitive effort. We all distribute information for each other. We come together on Museum Experience days. The Museum District itself produces an educators open house each fall, which brings teachers into five different locations in the district to learn about what all these programs are and what kind of outreach opportunities they have. Combined, the visual arts groups have 1.7 million outreach participants every year—that includes programs in the neighborhoods and schoolchildren that come for free tours or activities. Each program has such a unique focus, so every experience is going to be different.

Q | Any closing thoughts?
A | It’s an exciting job with an incredible group of institutions and leaders. You’re never bored. There’s always a different group of folks to talk to, and I like being in the mix of knowing what the possibilities are for the future of the whole area. I like that the Museum District and all of these other planning organizations, membership organizations and neighborhood groups are talking to each other and looking at the future together. The Museum District is in the heart of all of this and I consider it the anchor of the area. I hope we can be a unifying factor and work closely with the TMC to expand experiences for everyone.