At the second annual Bayou Startup Showcase, Rice University and the University of Houston’s accelerator programs come together for a joint celebration of entrepreneurship 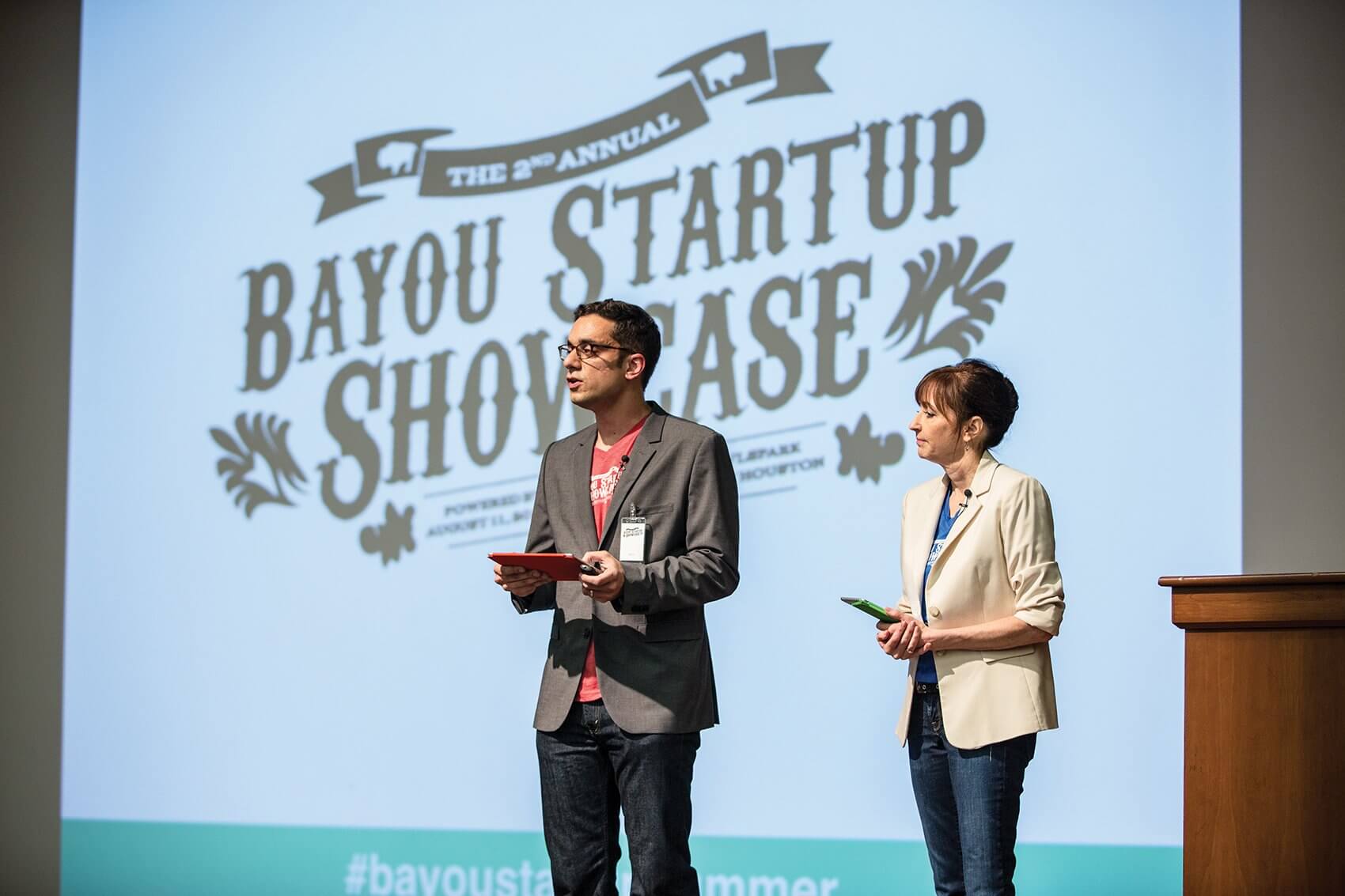 In the auditorium at the University of Houston’s (UH) student center, Hesam Panahi, Ph.D., founder of UH’s RED Labs startup accelerator, and Kerri Smith, managing director of Rice University’s OwlSpark startup accelerator, embraced their roles as stewards of entrepreneurship with gusto. Wearing clean-cut blazers draped over red and blue t-shirts stamped with their programs’ insignias—the unofficial uniform of the day—they effortlessly blended business professionalism and Silicon Valley chill. As they kicked off the second annual Bayou Startup Showcase, jointly hosted by the two programs to celebrate Houston’s startup community and give the teams a chance to pitch their ideas, a narrative of perseverance began to unfold.

“As you can imagine, putting together a program like this takes quite a bit of time, and packaging it into a comprehensive effort takes a while,” said Smith, also associate managing director of the Rice Alliance for Technology and Entrepreneurship. “For us, we started developing the curriculum for this year eight months ago, shortly after the close of last year’s program. And we thought we had it all figured out…until this happened.”

An image flashed on the screen at the front of the stage—a car completely submerged; tides lapping at the edges of a dumpster; forlorn looking stop signs failing to keep the rising water levels at bay. “This was launch day,” Smith continued, referring to the May 26 thunderstorm that left many neighborhoods throughout Houston flooded. “Our bayous were spilling over, our streets were underwater, our phones that morning were blowing up—we had caterers lined up and speakers confirmed, and we weren’t sure whether to cancel or postpone. In the end, we decided to forge ahead and launch that day. Our founders? They showed up, they plugged in, they engaged, and they helped us give a whole new meaning to a bayou startup summer.”

Taking place throughout the summer, RED Labs and OwlSpark provided a 12-week, experience-based education in entrepreneurship. Open to students at any level and studying any major— as well as faculty, researchers, and recent alumni— the two programs enabled budding company founders to form teams around technology-based business ideas that they believed would serve as the basis for a startup.

“We vet our teams through a highly selective application process that targets promising, scalable business opportunities,” noted Smith. “Once our teams are selected, we then provide a curriculum based around mentorship, leadership, and educational programs. Then, we connect them with subject matter experts, mentors, advisors and coaches who can help them test the assumptions and hypotheses they’ve made about their business.”

With 14 combined startups between the two programs, the teams this year represented a diverse cross-section of ambitious ideas from equally distinct industries, ranging from consumer products to health care. Among them were a subscription service providing board game enthusiasts with undiscovered, but professionally reviewed, games; a collapsible, high-resolution, 24-inch screen for business professionals on the go; a mobile app that provides customized meal plans for cancer patients; even an auto company crafting what they describe as “the first luxury electric car.” Condensing concepts that complex into succinct, five-minute pitches was no easy feat.

“Through a series of pitch practices, our founders received advice from communication experts,” explained Smith. “We wanted to help them more clearly articulate and succinctly convey the vision and value propositions they were offering. We created a community, a culture, and an environment that let our founders experience the value of working alongside like-minded thinkers and doers.”

The startup founders had an impressive pool of expertise to draw from. Throughout the summer, they learned from over 75 different mentors, coaches, journalists, and other community leaders that lent their time and support.

“Our founders also came together every Tuesday for dinner and conversation; we call these, ‘founders meetings,’” said Panahi, a clinical assistant professor at UH’s C.T. Bauer College of Business. “At founders meetings, we share our achievements, our challenges, and our next steps. But we also do something else that’s really important—we challenge and support each other. Many times throughout the course of the summer, one founder has been able to introduce another to a potential mentor, customer, or someone that can move their company forward.

“We encourage our founders to work with and learn from each other, but we’re also building a community,” he added. “With each cohort, our alumni web grows, creating a powerful network effect. We bring founders from previous cohorts back into the program to share their experiences and provide advice.”

Alumni companies remain heavily invested in that network. Medical Informatics, a Houston-based health IT startup, leveraged the connections they built to propel themselves forward—this June, they received FDA clearance to sell the first version of their data alert system.

“We used OwlSpark as a launching pad to help recruit our initial team of five people, as well as three interns,” said Emma Fauss, Ph.D., CEO of Medical Informatics, a company that performs real-time predictive analytics in critical care environments throughout the country. Medical Informatics currently resides in TMCx+, a shared co-working space adjacent to the TMCx accelerator. “We’ve come a long way since then, using the mentorship connections we cultivated and the wonderful advice we received to integrate into other hospitals around the country. We continue to encourage people within our companies to mentor other people trying to voyage into entrepreneurship— it’s a difficult road, and it really takes a community.”

OwlSpark and RED Labs first collaborated last year for the inaugural Bayou Startup Showcase, which provided an opportunity for startup teams from both accelerator programs to showcase their businesses to the greater Houston community. While this year’s event was structured around that same agenda, it was nearly impossible to distinguish which teams came from which university as they took the stage.

“An interesting side effect of this collaboration between OwlSpark and Red Labs is the blurring of boundaries,” said Panahi. “Throughout the summer, we’ve had people that traditionally work with one accelerator or university crossing over and helping out teams from the other. Many of these interactions have turned into meaningful relationships that will extend far into the future.”

This summer, the two accelerators cozied up and shared space in TMCx, the Texas Medical Center’s 100,000-square-foot facility dedicated to supporting life science startup companies in Houston. Over the course of their 12 weeks together, it became clear that this was more than temporary lodging—it quickly became a second home.

“Were it not for the space at TMCx, this summer’s program would have been completely different,” said Smith. “This has been a privilege, and an incredible value-add to our programs, to have the TMCx serve as our headquarters. OwlSpark and Red Labs resided separately last year, and it was a lot trickier to have joint sessions and field trips together. Co-working in TMCx has allowed us to collaborate more easily together—and honestly, we had a lot of fun with it.”

“There’s something really inspiring about having a space that’s so well designed,” added Panahi. “I’ve had teams telling me that they never want to leave this space—not in terms of the program itself ending, but they are literally at TMCx all day and all night long because they just enjoy being here so much.”

As the student entrepreneurs embedded themselves in the TMCx ecosystem, they worked alongside the 22 startups in the Texas Medical Center accelerator’s first class.

“We were delighted to host OwlSpark and Red Labs in our home,” said William F. McKeon, executive vice president and chief strategy and operating officer of the Texas Medical Center. “It’s pretty powerful to have that academic mindset and mind power behind these startups, and it was important to move them into a space where they felt supported. We’re looking to lower that barrier for entrepreneurs to actually make sustainable companies that we hope plant themselves here in our community. This place feels more like Palo Alto every day.”

After the Bayou Startup Showcase’s last pitches, the real action kicked into high gear. Standing at attention behind their booths, business cards splayed across tables and informational packets in hand, the founders were positioned to make some compelling connections—and take their ideas to the next level.

“More or less, I’ve gotten a mini-MBA this summer,” said Anderson Ta, founder of Open Factory, a company developing fabrication technologies for the current market of 3D printers. “I feel so much more confident with the lessons I’ve learned through OwlSpark. Now I can go out and execute my idea for a company and a business. The people they introduce you to and the lectures they hold are amazing—you can’t pay money for this kind of expertise and exposure.

“For me, the Bayou Startup Showcase is my one opportunity to get the attention of the Houston startup ecosystem,” he added. “This is a platform where, if you’re really interested in what you’re doing, then this is the right venue to go out and get in touch with the people that can actually help you. There’s a big, big network here, thankfully, because it’s a big world out there.”