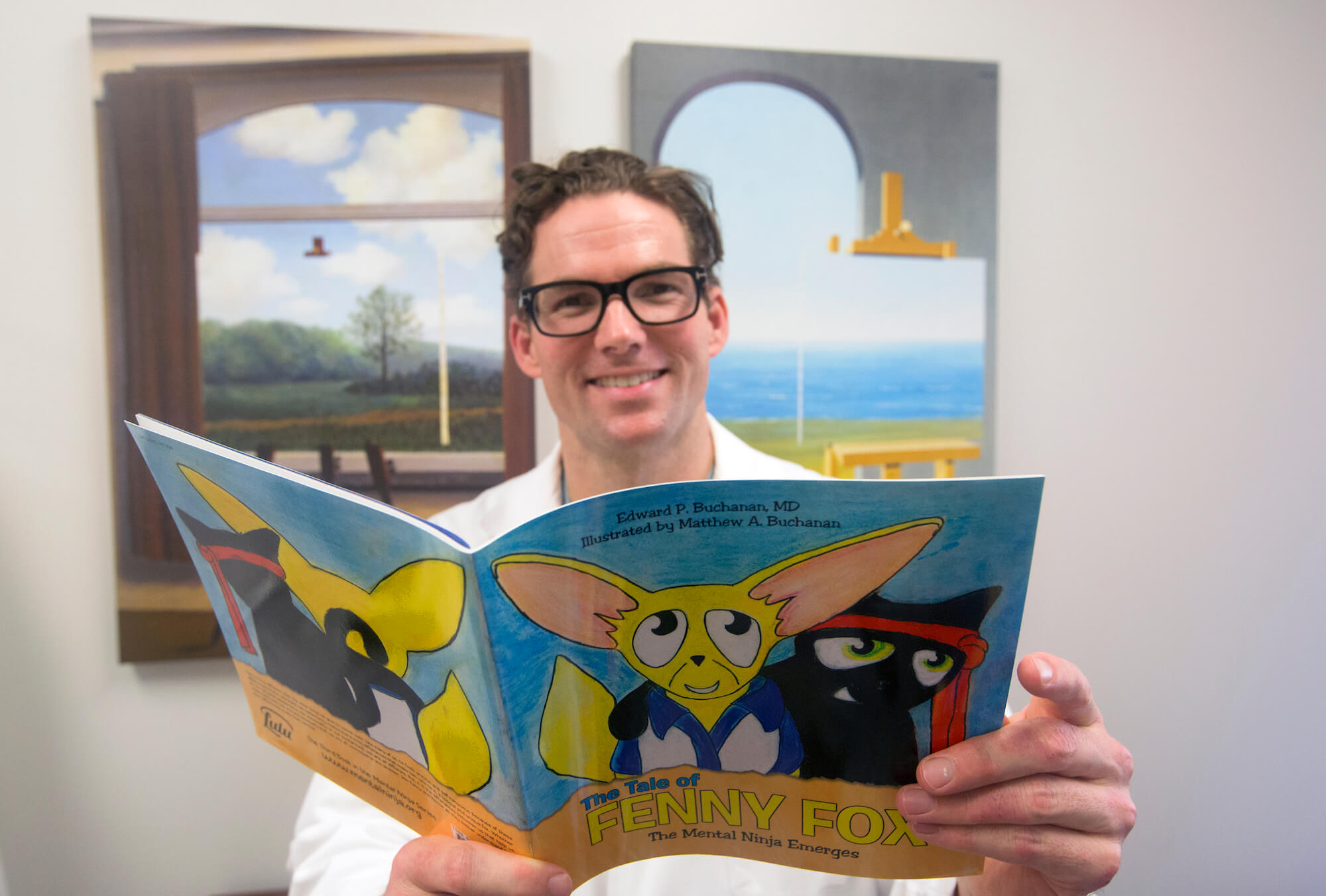 During his first year in practice at Texas Children’s Hospital, Buchanan was inspired by his patients to write books that encourage young people to embrace their individual differences, think positively and treat others—and themselves—with kindness.

“It was this concept of looking at things in a positive light rather than a negative light, which is the type of circumstance you come across a lot when you’re working in a children’s hospital,” said Buchanan, who directs the Cleft Lip and Palate Clinic at Texas Children’s. “There are lots of ways to look at certain things, and it’s really easy to look at things negatively. If that’s going to overpower your psyche, it’s going to be a very hard place to work in.” 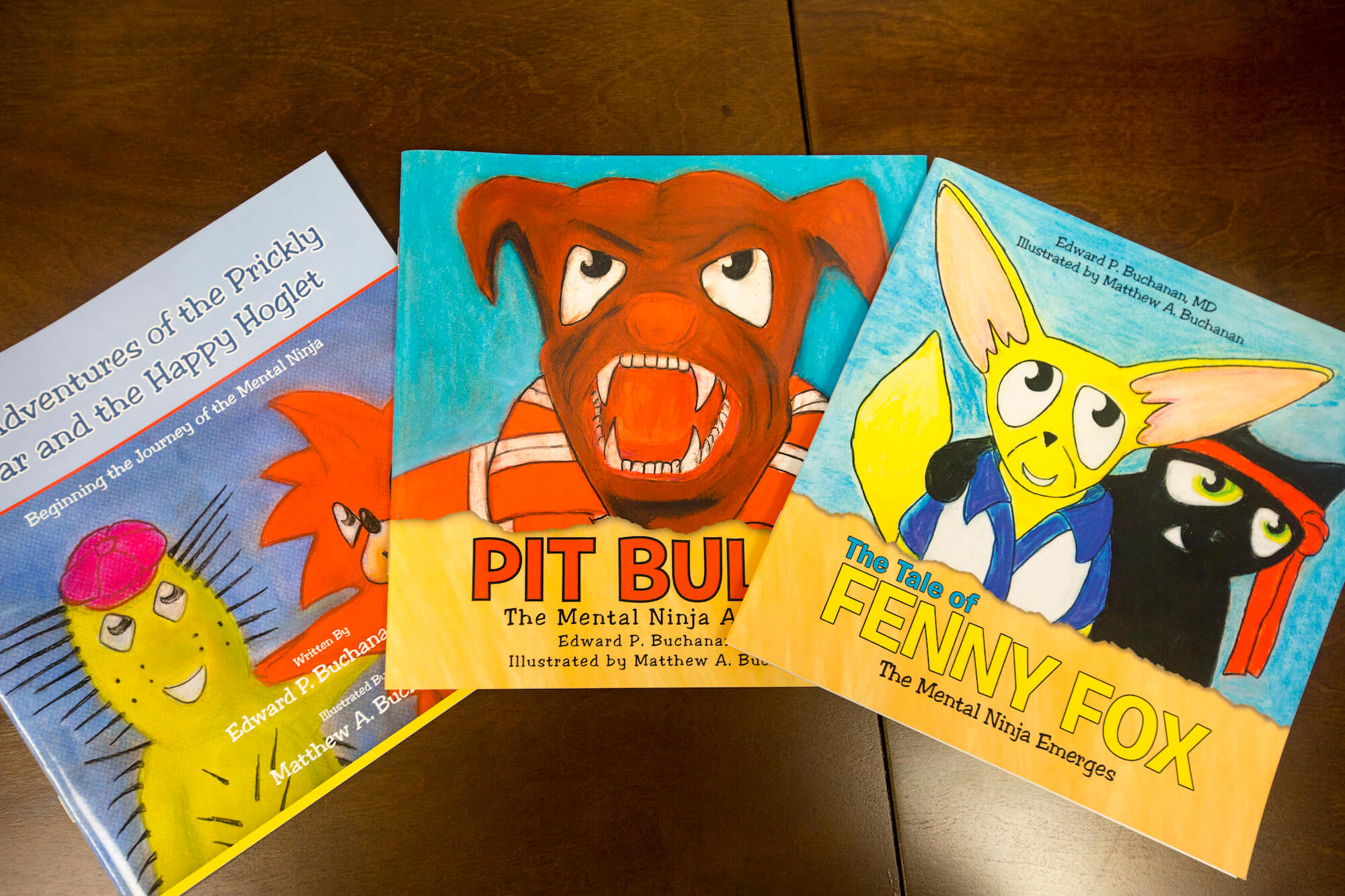 Buchanan’s foray into children’s books was also inspired by his role as a father. Raising his own children and spending long days with patients taught him the importance of cultivating emotional resilience in young people.

“They’re not very hard lessons. They’re just hard to learn,” Buchanan said. He recruited his younger brother, Matthew, to illustrate the stories and bring the characters to life. The first in his Mental Ninja trilogy, The Adventures of the Prickly Pear and the Happy Hoglet, was published in 2013. Through whimsical characters and playful artwork, Buchanan stresses the need to stay positive when facing challenging situations.

Two friends, Prickly and Happy, react differently to the same scenarios: Prickly experiences self-doubt and shies away from unfamiliar encounters, while Happy exudes confidence and delights in making new friends.

“At the end of the book, it comes down to a culmination of sharing their experiences and saying how you can look at things from different perspectives to make your day seem a little better, as opposed to a little worse,” Buchanan said.

Pit Bully: The Mental Ninja Awakens, released in 2015, tells the tale of Hector the black cat, who controls his emotions and stands up to Pit Bull Paulie, the school bully who torments students in class and on the playground. With a level head and compassion, Hector demonstrates to his friends—and readers—how to overcome bullying.

In the final Mental Ninja book, The Tale of Fenny Fox: The Mental Ninja Emerges, Buchanan draws on his personal experience as a pediatric plastic and reconstructive surgeon to emphasize the beauty of being different—whether that difference is based on physical appearance, personality or background.

For more than a decade, Buchanan has specialized in treating children with cleft and craniofacial deformities. Every Monday, the Cleft Lip and Palate Clinic at Texas Children’s evaluates patients with facial differences related to congenital or traumatic causes. The team sees and treats more than 80 patients each clinic session and examines more than 100 new cleft babies a year. Patients are seen by the multidisciplinary cleft team and followed until adulthood for all their clinical needs.

“The facial differences you get with cleft lip and palate are pretty significant and enduring for a lifetime,” Buchanan said. “It’s important that we think, from the very beginning, to empower the family, as well as the kids, to understand their differences and understand that everyone has differences. That’s what makes us who we are and that’s why people love us.”

With the Mental Ninja series complete, Buchanan is currently working on his next series of books, which will be based on the seven virtues—faith, hope, charity, fortitude, justice, prudence and temperance. The new series will be released next year.