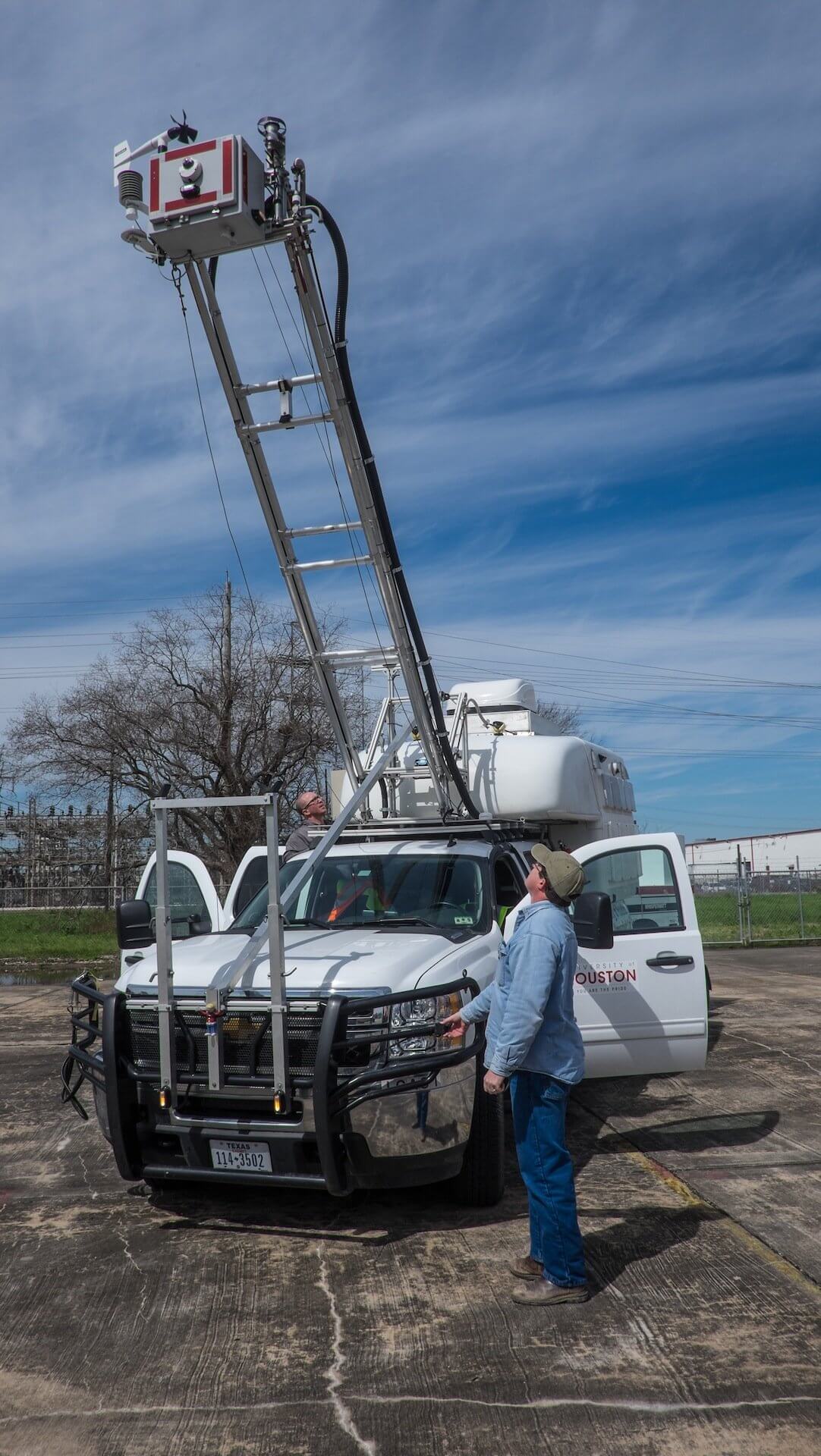 It has been nearly two years since Rice University and the University of Houston began an ambitious study to see how and where Houstonians encounter unhealthy air, but now the rubber has hit the road.

A Chevy 3500 diesel truck, its flatbed bay packed to the brim and beyond with sensitive electronic equipment, is roaming the highways in and around the city. Its extraordinarily sensitive sniffers pick up whiffs – and sometimes blasts – of airborne contaminants that citizens breathe.

The joint project by engineers and sociologists at Rice, the university’s Kinder Institute for Urban Research and the University of Houston is backed by a Houston Endowment grant. The project fills the gaps between stationary air-quality monitors that measure particulate matter — particles smaller than 2.5 micrometers (millions of a meter) in diameter that can burrow into lungs and affect the heart. The truck’s instruments also measure a range of pollutants that include ozone, carbon dioxide, several flavors of nitrogen oxide, benzene and methane.

The study will ultimately identify neighborhoods where the air is consistently unhealthy and match them with years’ worth of health records provided by the University of Texas Health Science Center at Houston and Texas Children’s Hospital.

There’s a lot of data crunching to come. For now, there’s data gathering. Members of the mobile team either drive to find pollutants or stay very still and let the pollutants come to them, a strategy the lab employed for much of the study’s first year.

On the stationary days, the crew parks the truck in one spot and raises the mast to capture drifting plumes. In early March, that meant camping out by plants along the Houston Ship Channel to see what flowed from their stacks and reached the ground. Later in the month they plan to park by a busy bus stop outside Houston’s West Loop to sample emissions from vehicles.

But one recent chilly Friday, the day’s task was a drive. Will Wallace, a Rice postdoctoral researcher in the lab of environmental engineer Rob Griffin, rode shotgun while colleague James Flynn, a research assistant professor at the University of Houston and manager of the Mobile Atmospheric Laboratory, took the wheel for a spin around the city.

The mission was to leave metro Houston, come back, leave again, come back again and so on to cover nearly every major entrance and exit to the city at least once. Repeating the route at various times and seasons allows the researchers to build a record of typical emissions for particular stretches of road.

“The route we’re doing today we’ll do at least three or four more times,” Wallace said. “We’ve only been mobile for a little bit, but we would like to get readings at different times of the year. Yesterday we drove Beltway 8 all the way around and then drove 610 all the way around twice. We hoped to do the beltway once more but just ran out of time.”

Driving is the only way to monitor the air Houston commuters encounter each day. From their bay at the University of Houston Energy Research Park just off Interstate 45, Flynn and Wallace headed east first, skimming the Ship Channel. Close to noon and with a light breeze from the southwest, they encountered and recorded industrial emissions from plumes they could see and some they couldn’t.

“In these conditions, we’re unlikely to pick up on plumes from the high stacks,” Wallace said. “So today we’re more interested in vehicle emissions.”

The ebb and flow as the truck headed north and then west showed up on monitors connected to the instruments outside. Graphs that indicate particulate matter spike when a dirty truck roars by, as many do. (The lab is no speed demon, topping out at about 60 mph.) While Flynn paid attention to the road, Wallace took notes and eyed a laptop between the front seats that charts nitrogen oxides, carbon dioxide and monoxide, particulates and ozone measured by several different methods. He also monitored a tablet that keeps running track of methane, aerosols and volatile organic compounds that affect ozone concentrations.

“Today is a nice one to do this,” Wallace said. “We have a nice clear background.” In fact, when the truck stopped for a break on the northwest corner of Beltway 8, the monitors flatlined as a breeze blew past the truck and over the highway, carrying vehicle exhaust in the other direction.

In heavy traffic, particulate levels were constant and moderate with the occasional hit from a nearby truck. But at the speed limit, breezes pushed background emissions off the road and allowed the instruments to pick up emissions from single vehicles.

The crew isn’t above calling an audible, depending on traffic or things of interest that catch their eye. They may spot a particularly smelly truck they want to follow or a plume in the distance from a fire or smokestack to investigate.

“You almost never see anything visually. Occasionally you’ll see a smoky car, but that’s not even 1 percent of the fleet driving around,” Wallace said. “For the most part, cars are really clean. If you look at the pollution in an urban area on a polluted day, at least with respect to particles, what’s coming out of the pipe of a gasoline engine is often cleaner than the ambient air. Pollution controls really do work.

“That’s another reason we want to go out and evaluate the mobile fleet. This is just kind of a side project but it’s what we’re doing today. As the vehicle fleet turns over and new pollution controls are implemented, we want to look at how the emissions are changing over time and make sure it gets catalogued.”

The instruments also stream data over a mobile Internet link so colleagues in Griffin’s Rice lab and the University of Houston lab of Barry Lefer, an associate professor of Earth and atmospheric sciences, can see what the truck sees. Everything is recorded, including data from sensors and time-stamped, 360-degree video feeds from atop the truck.

Wallace said the gigabytes of video gathered every day make it easy to match spikes with sources. The material may also make a good blooper reel someday, if anyone ever has the time to locate footage of gesturing drivers or coal-rolling yobbos.

Generally, commuters show their interest in friendlier ways, tossing the occasional thumbs-up and asking questions at rest stops. Police rarely trouble the crew; Flynn recalled being pulled over only one time. “The officer got out of the cruiser and flashed the ‘Coog’ sign, so we knew we were OK,” he said. “He was just interested in what we were doing.”

Getting the truck ready to roll in the morning is akin to preflight for an aircraft. Flynn, a veteran pilot, knows the process well. While the instruments are never turned off during busy periods, the day’s crew must switch power from the home bay at the Energy Research Park to the generator that rides behind the truck.

The mobile lab has evolved since its shakedown cruise as part of NASA’s DISCOVER-AQ mission, which combined aerial and ground surveys of Houston’s air quality in one intense, around-the-clock month in September 2013. The researchers and their graduate students worked long days and nights to provide a picture of the city’s atmosphere that NASA will use to develop more sophisticated satellite-based monitors.

Back then, even with fewer instruments on board, the generator was an issue. Flynn designed the lab to be self-powered but the truck didn’t provide enough juice to run the racks of instruments and 38,000 BTUs of air conditioning — enough to handle several small houses — that keeps them cool. Thus the trailer.

“The original vendor overpromised and underdelivered,” Flynn recalled, adding that he is still looking for a less-cumbersome solution.

Still, he’s proud of the mobile lab. He winced when he recalled the meatball sub a graduate student brought along on an early run. Food is necessary on long assignments, he recognized, but cleanliness is a priority within as well as without.

For Griffin, who studies the chemical behavior of gases and particles at or close to ground level, going mobile is a good way to complete the data-gathering component of the study. “We had intended to do the mobile measurements sooner in the project, but because of logistics, we focused on the stationary monitoring first,” he said.

He said the lab is charged with sampling not only along the open road but also from on and off ramps and near over- and underpasses and sound barriers. “We’re interested in looking at how specific particles and constituents and other pollutants vary with distance from the roadway. People have done that before, but they’ve looked at one pollutant or total particles.”

Rachel Kimbro, an associate professor of sociology, and Justin Denney, an assistant professor of sociology at Rice, co-directors of the Kinder Institute’s Urban Health Program, have been able to use their initial (and ongoing) analysis of Houston health data to point the lab toward locations of particular interest.

Kimbro appreciated the flexibility. “We have sent the engineering team some of the maps we’ve drawn from our asthma risk study,” she said. “We’re looking at asthma risk and total respiratory risk, which includes other kinds of respiratory outcomes as well, and saying, ‘Look, it’s clustering over here. We don’t have good measurements so we need to get more data to see what’s really going on.'”

“I like that this project is so interdisciplinary,” Griffin said, acknowledging the long road ahead. “We’re getting the data we want, and now the hard part is doing the analysis. And the hardest part of that is just how time-consuming it is.”

Though data gathering for the original mission winds down this summer, the mobile lab will continue to serve, with proposals in the works for several projects in and away from Houston. Flynn is busy piecing together a second truck with instrumentation that will complement the existing one. “We have hopes that we’ll take this all over the country,” Wallace said.

He said only two or three other vehicles in the nation can match the collaborators’ capabilities. “The University of Houston doesn’t have the aerosol mass spectrometer (used to identify airborne particles), and we at Rice don’t have the Mobile Lab. So it’s a perfect fit,” said Wallace, who remains passionate about the mission even after many months and many, many miles.

“A lot of people think if they won the lottery, they’d go get some fancy million-dollar car,” he said. “I’d go get a fancy mass spectrometer.”