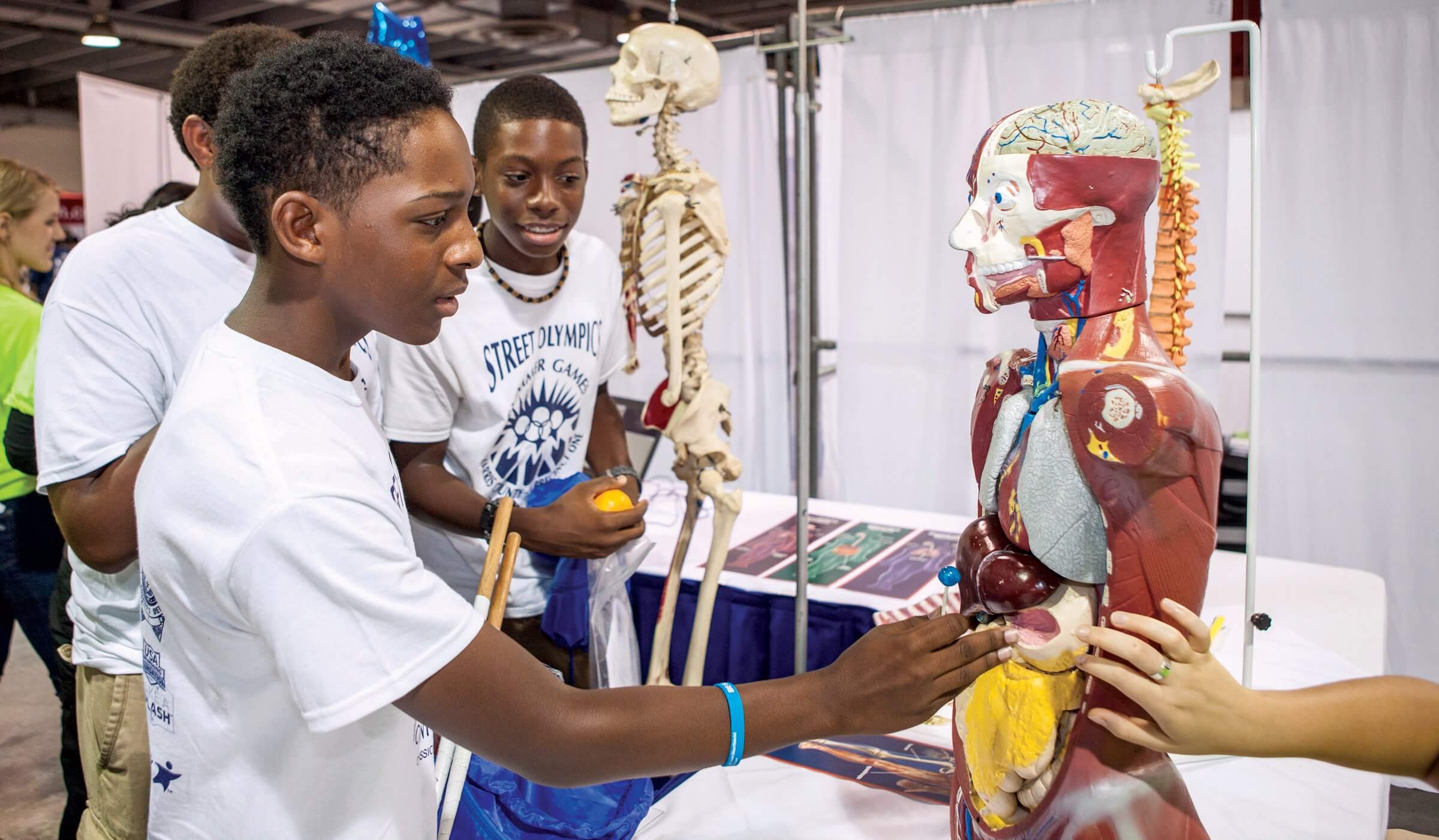 Cocooned by the triumphant sounds of high school marching bands, hundreds of children from community youth agencies throughout Harris County proudly pace around the perimeter of NRG Arena. Carrying homemade team banners emblazoned with the name of their organizations, the finalists are flanked by mascots and sponsors as they participate in a ceremony with grandeur and spectacle reminiscent of the international Olympics. As the torch ignites the Olympic flame, the all-too-familiar words from El Franco Lee, Harris County Precinct One Commissioner, echo across the stadium at the end of his opening address: “Let the games begin!”

On August 8th, about 2,300 boys and girls ages six to 15 competed in 12 events, from jacks to football–pass accuracy, at the culmination of the 28th Annual Harris County Precinct One Street Olympics Summer Games. Three hundred gold, silver and bronze medals were awarded in each sport and in each age division. The young athletes represent the best of approximately 3,500 participants who trained and competed for eight weeks at participating youth organizations.

While the event will conclude this year’s Summer Games, other Street Olympics’ components will continue throughout the year, including the Harris County Aquatics Program, Traveling Naturalist Program and the Northeast Adolescent Program. “The Street Olympics was not something that was contrived,” reflected Lee, who founded the Street Olympics in 1986, cultivating a well-rounded program offering an enriching educational experience to Houston-area youth throughout the summer. “It was something that helped me to develop and I believe in guiding others on the path to development—this is just a way to systematize that and harness the potential of the young people in our community.”

The Street Olympics’ Summer Games begins competition in community based youth groups, such as the YMCA and City of Houston Parks & Recreation Department, in June of each year. Since its inception, the Street Olympics has grown from a summer–only recreational program to include four major components that address the social service, health care, educational and vocational needs of Harris County youth. Starting with a roster of little more than 200 participants, the program involved upwards of 10,000 youth and young adults this past year.

“Over the past 28 years, we’ve touched the lives of over 100,000 kids,” said Yvette Chargois, chair of the Street Olympics Board of Directors. “If we made a difference in the life of one of them, then it’s been successful. What we try to do is not just show them some fun games and fun things to do, but also try and educate and let them know that there are many resources available for them.” Providing a cross section of Lee’s comprehensive efforts to address the needs of young people throughout Harris County, the Bright Futures Fair acted as a companion event to the athletic competition. It was held throughout the day at the other end of NRG Arena. The Bright Futures Fair consisted of 90 exhibitors who strove to keep the athletes busy between their events while exposing them to the wealth of opportunities available in Harris County and beyond.

“The Bright Futures Fair exposes kids to what’s happening in their community,” said James G. Wooten, Planetarium Astronomer at the Houston Museum of Natural Science (HMNS). “A lot of kids, especially those in the inner-city, aren’t sure of what’s available or what’s happening around them—the cycle often gets repeated where underserved kids get stuck in a rut because they’re not aware of the options out there. This exposes them to a sampling of everything and everyone around them, and shows them what they’re capable of.”

Walking amidst the controlled, chaotic energy of the Bright Futures Fair, children could be found entranced by the mysteries of the universe under the Discovery Dome, HMNS’s portable, full-dome theater; descending into the depths of three different ecosystems at Discovery Camp’s exhibit, an extension of the Street Olympics’ Traveling Naturalist Program; or learning about the lush variety of herbs, plants and vegetables present at the Harris County Horticulture Department booth.

“A lot of these children who come from low income families don’t really have the opportunities to participate in anything like this—for them it’s a new experience,” said Christina Hartman, a naturalist for Harris County Precinct One who works with Discovery Camp, a one-day summer program designed to teach young people about their relationship with nature. “They might have never been hiking before or had the opportunity to visit a park setting outside of the city limits. We just want them to have fun in nature and value that experience, hopefully fostering a respect for the things around them. We hope that they’ll want to protect the environment.”

After five hours of competition, entertainment, free lunch and the energy of the Bright Futures Fair, the Olympic flame is extinguished, closing out the 28th year of the games. Tired but happy athletes, many of them wearing their medals, make an organized exit to go home to celebrate their day. “Today is all about repurposing our connections, from the involvement of the Texas Medical Center to our partnership with NASA,” concluded Lee. “That’s what this simple event accomplishes, as we try and light a spark or plant a seed, in anything from music to science, to initiate a conversation and generate ideas that could lead young people to become anything from a pediatrician to a musician. Even if that spark of an idea won’t manifest itself for a year to ten years, if we do that and that alone, then this mission will have been successful.”