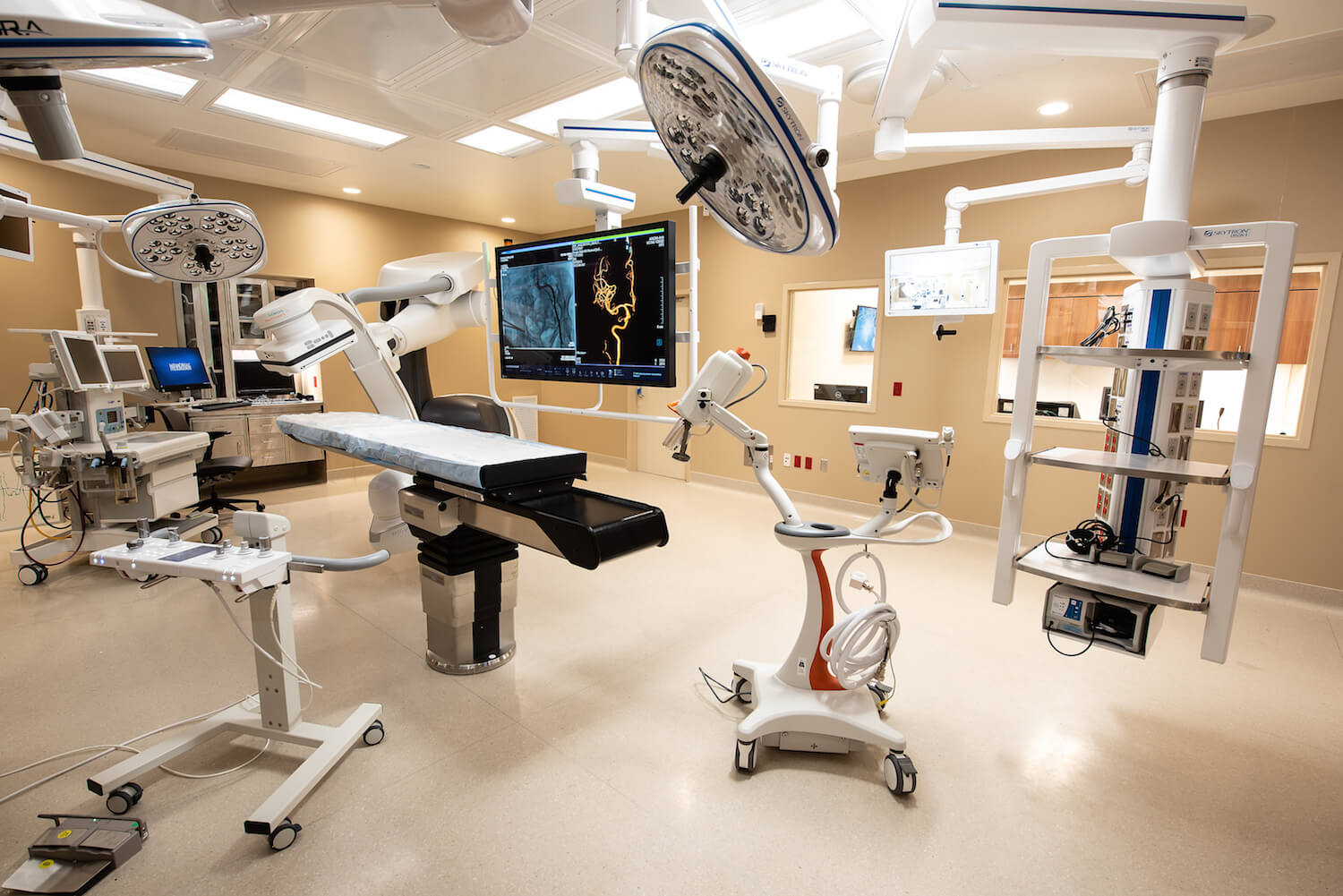 Memorial Hermann-Texas Medical Center has opened the new Susan and Fayez Sarofim Pavilion, a $700 million renovation and expansion project seven years in the making. The new addition at Memorial Hermann-TMC, which is part of the Memorial Hermann Health System, will address growing health care and trauma needs in the Greater Houston area.

“This is really going to revolutionize [care for] our most critically injured patients,” said Michelle McNutt, M.D., chief of trauma at Memorial Hermann Red Duke Trauma Institute. “Since this is the busiest trauma center in Texas, and certainly in Houston, I think we’ll really be able to demonstrate some improved outcomes. … We see about 8,000 traumas in a year and that number is continuing to increase.” 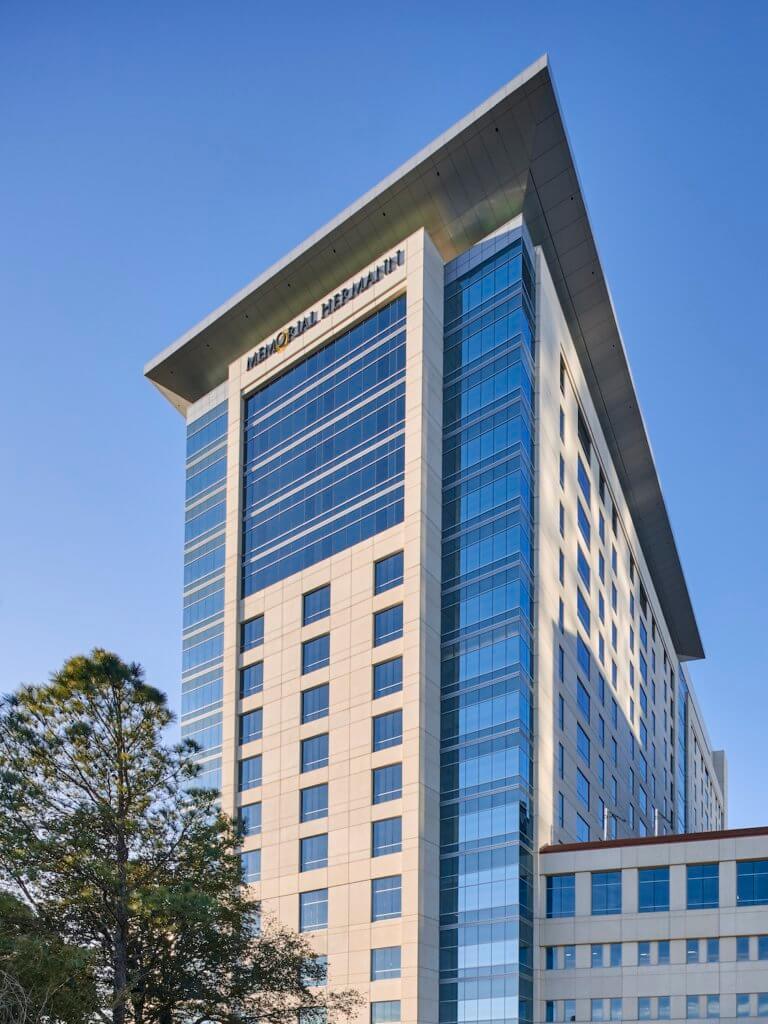 The 17-story structure, also the new home for the Red Duke Trauma Institute, consolidates all trauma services into one building. Among 24 new operating rooms, there are three revolutionary hybrid ORs that combine traditional operating theaters with advanced imaging techniques, allowing highly complex cases to be treated in one room.

“The most common causes of death in trauma are bleeding and brain injury,” McNutt said, explaining that patients do better if surgeons can control bleeding early and if they can also diagnose and treat brain injury early. Prior to the hybrid ORs, many of these patients were moved from the operating room to a different room for imaging—potentially leading to a delay in treatment.

“With this trauma hybrid operating room, we can do every operation on every part of the body to stop the bleeding and simultaneously do CAT scan imaging,” McNutt said. “This technology will allow the busiest trauma center in Texas to improve outcomes for traumatically injured Houstonians.”

In addition, her team is preparing to formally study these outcomes as part of their research activity through The University of Texas Health Science Center at Houston (UTHealth).

“We anticipate that we will be stopping bleeding earlier and that will translate into better survival,” McNutt said.

The Sarofim Pavilion also houses Memorial Hermann Life Flight’s new John S. Dunn Helistop, which is 10,000 square feet larger than the former helipad and allows for the accommodation of heavier and larger aircraft, including Black Hawk helicopters. The decontamination showers—which are useful for trauma patients airlifted to the tower who may have been exposed to hazardous materials—doubled from their previous size to better accommodate major disaster events. In addition, a large trauma elevator allows for dedicated access from the helipad directly to trauma operating rooms or the emergency center.

“With all the latest and greatest technology that we’ve employed upon our aircraft, the crews, while en route, can do certain types of procedures on the aircraft where they can determine if the patient really needs to go directly to the operating room and bypass the emergency center,” explained Tom Flanagan, RN, M.S.N., vice president of the trauma service line and system integration for Memorial Hermann Health System. “So with that capability, we’re able to radio in and the crews will go directly from landing here to the OR.” 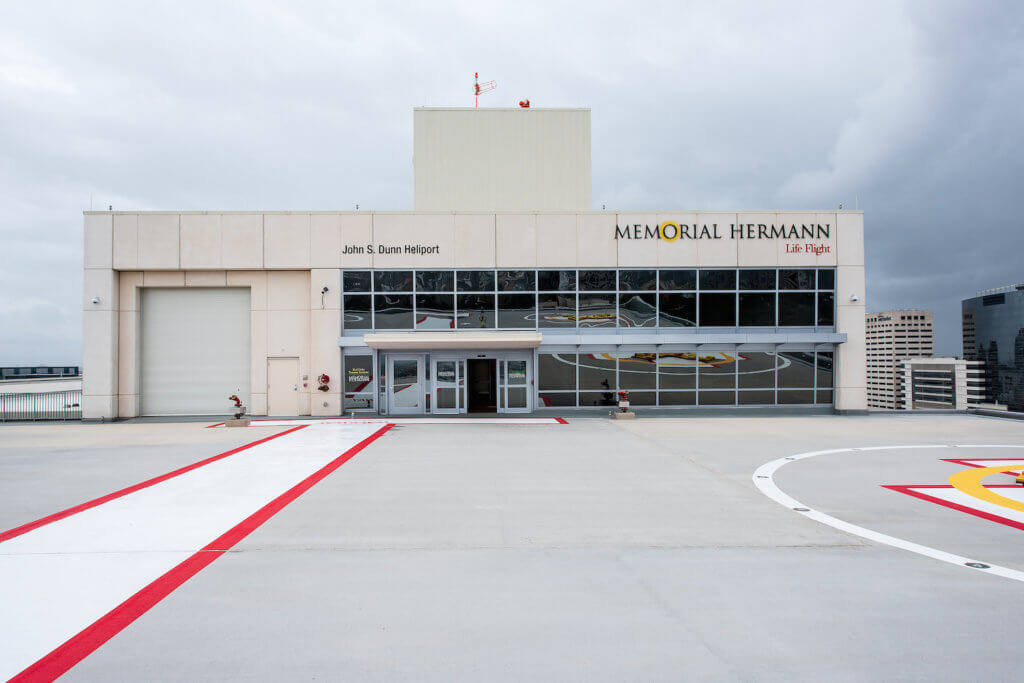 The new ambulance bay in the Sarofim Pavilion is now covered and is double its previous size. All adult trauma rooms can be enlarged to twice their size in the event of a mass casualty crisis. In fact, the emergency center expanded by more than 100 percent—from 32,000 to 76,000 square feet—with the number of treatment bays increasing from 48 to 63 by the time all construction is completed in 2021.

Each trauma room—adult and pediatric—includes an imprint of red cowboy boots to honor the legacy of Dr. James H. “Red” Duke, Jr. He co-founded Life Flight and was a pioneer in trauma care for Houston and the nation. He would always wear cowboy boots as he operated on patients, Flanagan noted, and the outline of the soles of his boots mark the location where the lead trauma physician typically stands during a case.

In total, the new pavilion has 186 additional patient beds—all built to operate as ICU beds as needed.

On the second floor, the new Arboretum Café will seat about 335 people. The restaurant offers an expanded menu including more sushi, vegan and vegetarian items as well as a “grab-and-go” section open 24 hours a day, seven days a week.

While the new tower provides an additional 1.34 million square feet to the campus’ existing 2.5 million square feet, the designers planned for even more expansion in the future. In addition to the five inpatient floors, there are six empty floors ready for growth in the coming decades. The second phase of construction includes renovation to part of the existing campus and a new, connected parking garage slated to be completed in 2021, which will bring 900 new parking spaces to the campus.

“This has really been a gift—a gift from the Sarofims in this pavilion to make this happen,” Flanagan said. “Not only is it a gift to Memorial Hermann and Memorial Hermann Life Flight—it’s really a gift to the community of Houston and the areas that we service.”