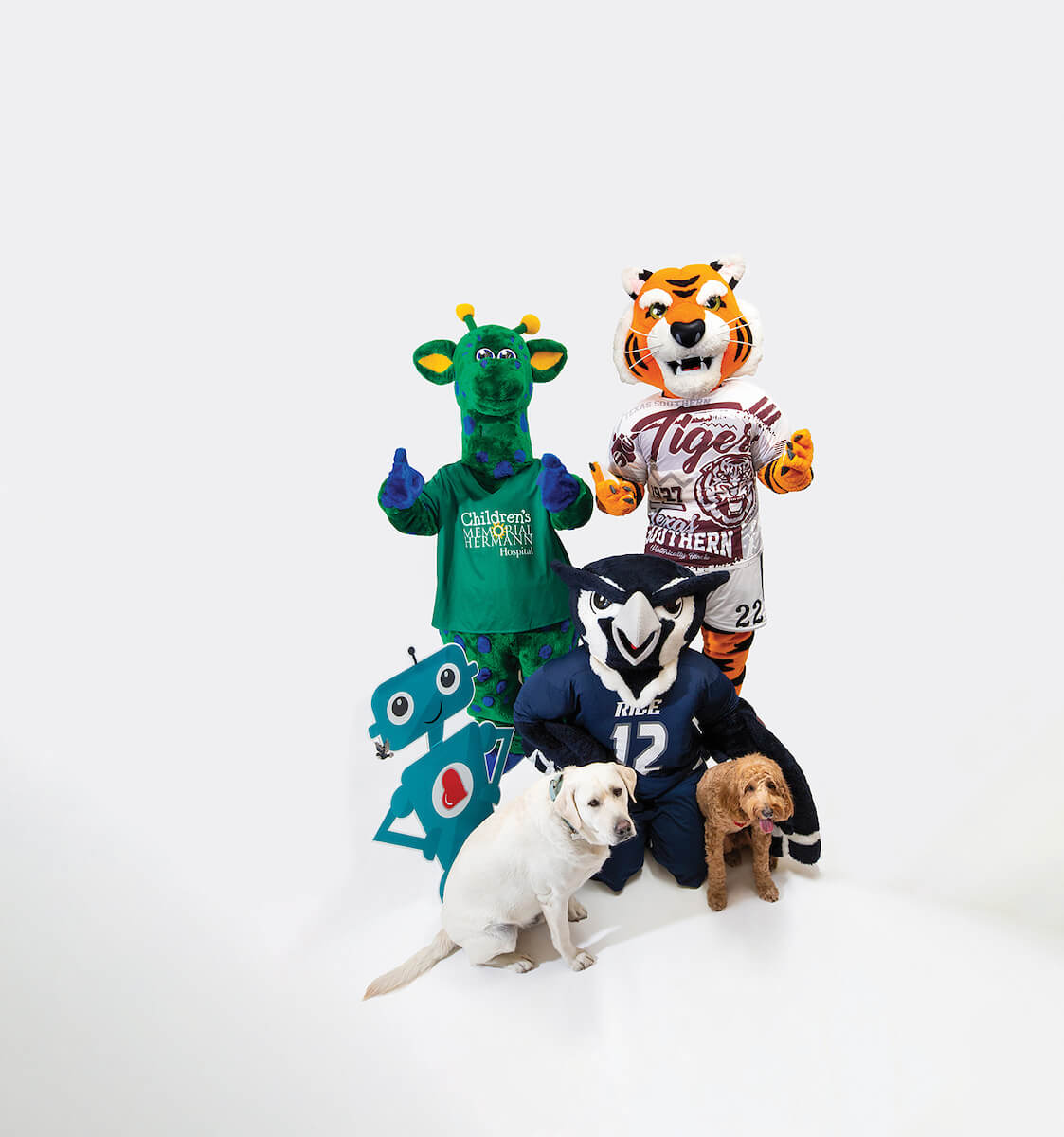 High-rise hospitals and state-of-the-art research facilities spring to mind when one envisions the Texas Medical Center. People, too—the experts and academics who’ve made Houston’s gleaming medical city a leader in life sciences and innovation. But there’s another element at play, a small cast of fun-loving characters creating something every community needs: Spirit.

Mascots are positive forces who unite diverse groups of people by providing a sense of loyalty, pride and belonging. Among the mascots of TMC member institutions are costumed tigers, fluffy dogs and a cardboard robot. With their quirks and individuality, TMC’s ultimate brand ambassadors serve as pick-me-ups in places where not everyone always wins and not everyone always thrives.

Cool-E Robot
Project Heart is a beloved Texas Heart Institute (THI) program whose star is a fictional android called Cool-E Robot. He is named after cardiovascular surgeon and heart transplant pioneer Denton A. Cooley, M.D., who founded THI in 1962. Project Heart is an elementary school curriculum designed to help pupils make heart-healthy choices. Cool-E Robot’s origin and adventures are detailed in a storybook available in English and Spanish. He’s an imaginary invention of Cooley’s whose mission is to share heart health with children worldwide. Presently, Cool-E Robot is a two-dimensional cardboard cutout, but he may soon roam THI halls as an interactive 3D mascot.

Dove in flight (dangling from Cool-E Robot’s ear)
LifeGift’s logo includes its mascot—a dove in flight—to express hope, freedom from the confines of disease and the moment of transformation offered by organ and tissue donation. The dove embodies the purpose and mission of LifeGift, a Houston-based organ procurement organization that partners with TMC institutions as well as hundreds of hospitals in north, southeast and western Texas. “The dove, as we describe it formally and informally, truly represents what we do, which is offer hope,” said LifeGift CEO Kevin Myer. “More specifically, the dove in flight represents that transition moment from very difficult, tragic times for a donor family into an amazing and incredible opportunity for life after transplantation. It just couldn’t be more perfect.” 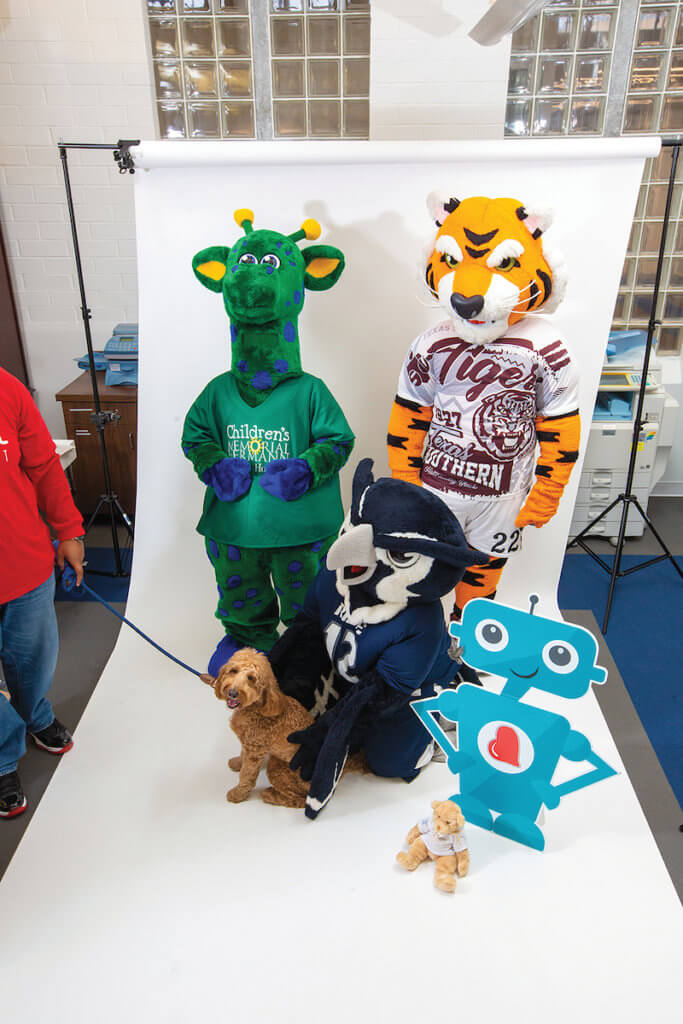 Wrangling a group of mascots for a photograph is no easy feat, as these outtakes reveal. Costumed characters and humans helped calm their canine friends.

Hunter
Hunter is a sweet, 3-year-old Labrador Retriever who represents St. Dominic Village, a faith-based retirement community on Holcombe Boulevard at Almeda Road. The 100-pound, four-legged friend is a calming force for the resident seniors. He also mingles with board members. “He attends many meetings and will go from one side of the board room to the other when he spots the folks he knows will show him love,” said Melba Hamilton Breed, St. Dominic’s director of marketing and admissions. “He literally turns to the side he wants you to rub on.”

Hunter’s pal, Ms. Kitty, is a stray cat adopted by St. Dominic Village who declined to give her age and was unable to accommodate photos or an interview. She can be observed activating automatic doors, hitching a ride on the walkers of residents, sleeping on top of desks or curling up in a chair someone was about to use.

“There has never been a cat with so much attitude” Breed said. The two furry resident mascots happily interact with humans, but the party stops there. “When they see each other, they’re like two ships passing in the night and never even make eye contact.”

“When our admissions staff tour potential residents or family members, Ms. Kitty will often fall in step and partake in the tour along with any strokes of love visitors are willing to give her,” Breed added.

Sammy the Owl
Rice University’s 113-year-old mascot, Sammy the Owl, has an illustrious, near-infamous and century-long history of survival. In addition to being elected homecoming queen, Sammy has been kidnapped multiple times since 1917 and was smuggled out of the former Rice Hotel disguised as a corpse. When the Rice Owls won the 2003 College World Series, Sammy celebrated by jumping on a pile of baseball players as they relished the victory. Once a pair of live owls each named Sammy, Rice’s mascot transformed into a costumed character in the 1970s. The students and volunteers who have occupied the suit have been rousing fans, making mischief and witnessing Rice history for more than 40 years.

Sunny the Bear
This plush toy represents comfort for the young people served by DePelchin Children’s Center. A child receives the bear when welcomed into a foster home or in a courtroom where a forever family is made official.

Tex, Rex and Lex
The Texas Southern University Tigers are represented by Tex and his brother, Rex, first introduced in 1996. Known for their outstanding abilities as dancers and game-day hype men, the tigers can be found clowning around courtside at basketball games, tumbling alongside the football field and working parades and pep rallies. Perhaps the most popular pair on campus, the siblings expanded into a cheerleading trio in 2018 when the university introduced their little sister, Lex, who sports a hair bow and fluttering eyelashes.

“Topper provides a positive distraction for children to help with their healing process by cheering them up, lifting their spirits and allowing them to actually be a kid,” said Susie Distefano, CEO of Children’s Memorial Hermann Hospital.

The costumed giraffe became a member of the Children’s Memorial Hermann family—and earned his name—after patients looked out of their hospital windows to see the tops of giraffe heads across the street at the Houston Zoo, Distefano said.

“Years ago, when a new giraffe was born at the zoo, Houstonians and many friends of Children’s Memorial Hermann voted to also name that baby giraffe Topper,” the CEO added.

There’s also another tale that a nameless baby giraffe wandered across the street from the zoo with an injured ear that “people doctors” bandaged before returning him home with a name. Either way, Topper now celebrates the skills of his healers as a tall and terrific hospital mascot. 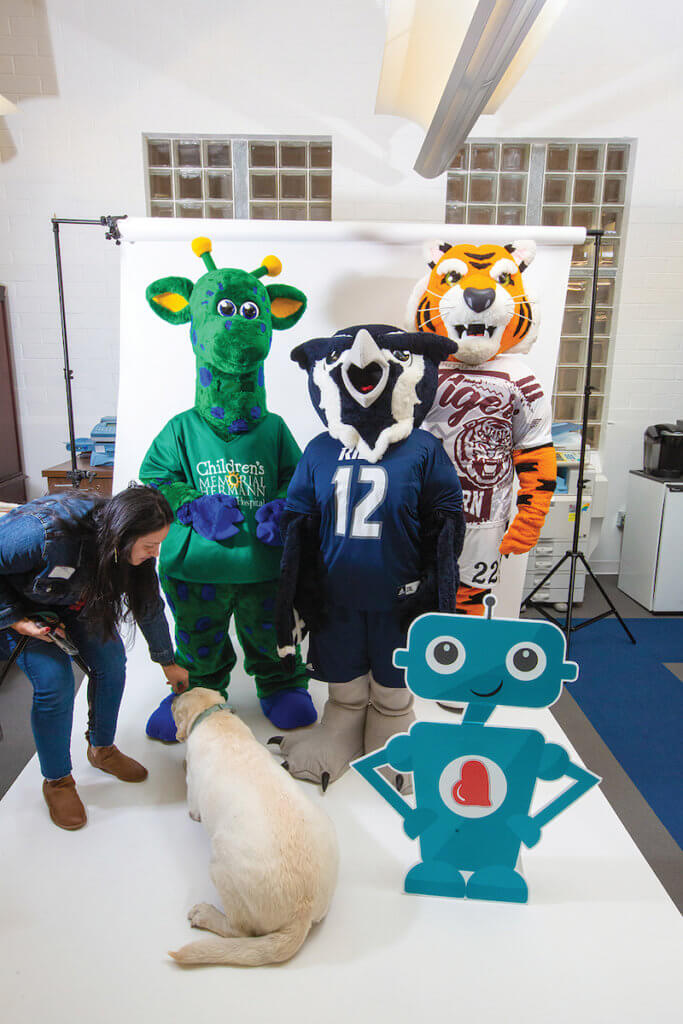 Wrangling a group of mascots for a photograph is no easy feat, as these outtakes reveal. Costumed characters and humans helped calm their canine friends.