Considered the chief architect of the ADA, Frieden talks about the landmark legislation, what’s next for disability rights in the U.S. and how the COVID-19 pandemic has impacted people with disabilities 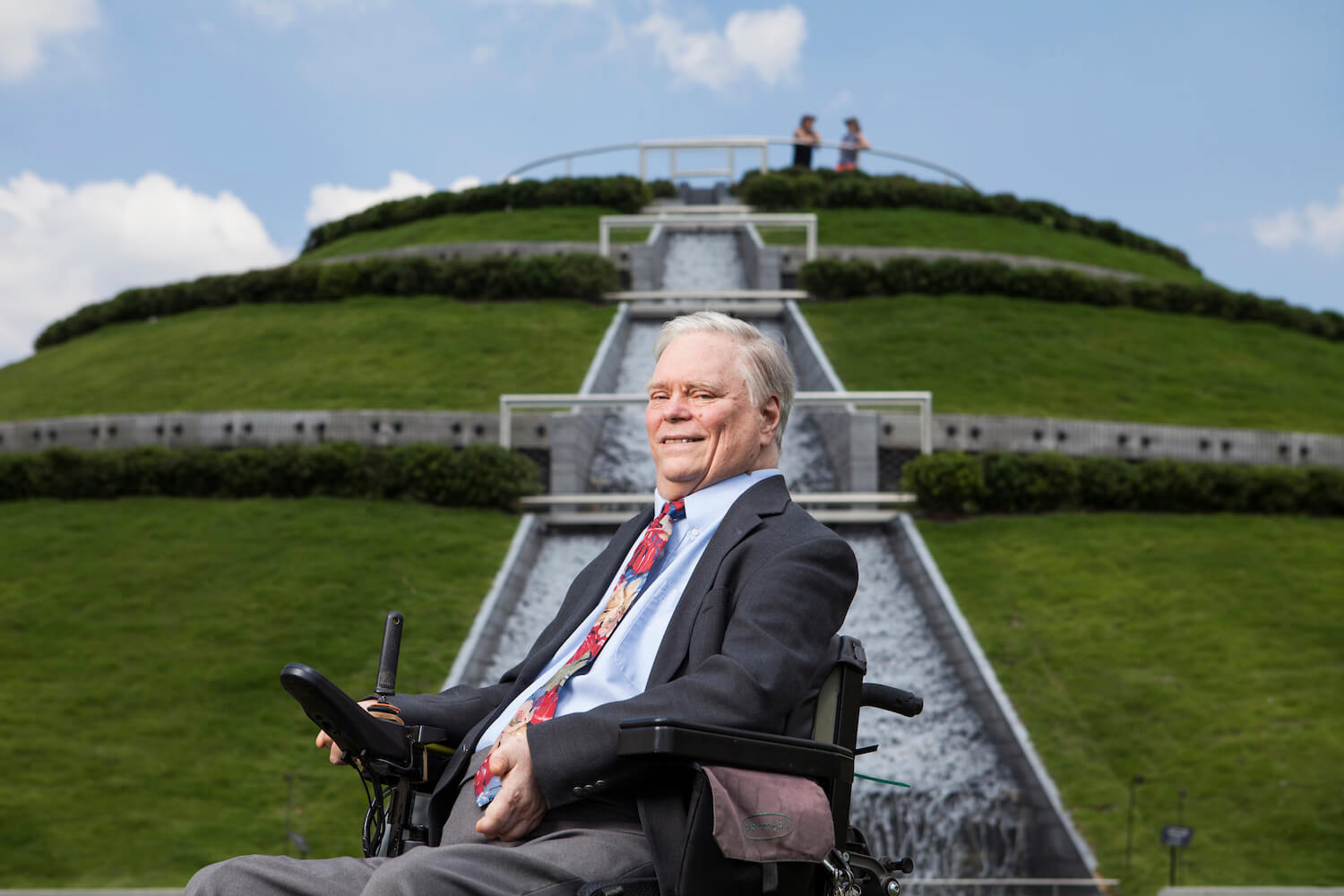 To commemorate the 30th anniversary of the Americans with Disabilities Act (ADA), which was signed on July 26, 1990, TMC News spoke with disability rights activist Lex Frieden, a Houstonian who works as the director of the Independent Living Research Utilization program at TIRR Memorial Hermann, as a professor at The University of Texas Health Science Center at Houston (UTHealth) School of Biomedical Informatics, as a professor of physical medicine and rehabilitation at UTHealth’s McGovern Medical School and as an adjunct professor of physical medicine and rehabilitation at Baylor College of Medicine.

TMC: On March 12, 1990, a group of activists performed a civil action that would come to be known as the “Capitol Crawl” and is widely regarded as propelling the Americans with Disabilities Act forward. Why do you think this was so impactful?

Frieden: The ADA had been debated by Congress for nearly two years before it got to the point of being considered for final passage. It had to go through five committees in the House of Representatives before it could get to the floor, and we felt like it was well on its way. We had the support of the President and the leadership in the House and the Senate, but at some point, the small business community and the transit industry raised a number of issues that had not been raised before—it was almost after the fact, but it was enough to postpone one of the final committee passages that had to occur before the House could bring up the bill. That slowed the bill and so at that point, a group of people with disabilities, led by an organization called ADAPT, organized a civil action on the steps of the Capitol. People in wheelchairs came to express their desire to have the House and the Senate pass the bill and the President sign the bill, and almost spontaneously they began to lift themselves out of their wheelchairs and pull themselves up the steps of the Capitol, and that became a media event. It made headlines and news stories all of the country—and soon thereafter, the bill was passed by the House and the Senate and signed by [President George H.W. Bush].

TMC: The Americans with Disabilities Act has made a substantial impact for so many individuals in the last three decades. What do you consider to be its biggest legacy?

Historically, you can reflect back to the point in time when Franklin Roosevelt was President of the United States. He had polio before he was elected. He was clearly a person with a disability—he used a wheelchair when he was in his home—and yet, he posed as a person without a disability, and he made it clear to the press and to those around him that he did not want to be portrayed as a person with a disability. He said that it was because he was afraid he could never be elected if people knew he had a disability. And yet, he was one of the greatest presidents we’ve ever had and he served throughout his three terms with a severe impairment as a result of polio.

That describes the attitude of the public before about 1970 and 1980, and eventually there was a sea change in attitude when the ADA became law. People confronted their own arcane views of disability and expectations changed, and now I think people are inclined to be annoyed by businesses that do not provide access to people with disabilities. Beyond the fact that they’re violating the law, I think the public objects to excluding this huge portion of our population. Twenty percent of our population are people with disabilities, and as our society ages, the number will go higher. And I think the ADA has changed the basis of our beliefs and has changed our values and has effectively changed our culture.

TMC: Looking forward, what do you think is the next step toward improving the lives of people with disabilities?

Frieden: President Bush’s vision was that people with disabilities should participate fully in the mainstream, that they should be able to live independently in our communities, that they should be part of our families and part of our ordinary, everyday life. And we have achieved that to some degree, however, many people with disabilities and chronic conditions today must live in nursing homes or other kinds of institutional settings. And the reason they are there is because we do not have sufficient, accessible, affordable housing in the community and we don’t have infrastructure to support home and community-based services in our communities.

As a person ages, at some point in our lives—should we be fortunate enough to live long enough—we will all have a disability of one sort or another. We will all have difficulty hearing, seeing, walking, remembering—all of those things are correlated with age—and we have not provided a system so that people can age in place. We need to have appropriate services available to people so that they do not have to move to a sheltered environment, to a nursing home or another institution, when they become old and need assistance, or when they have a disability and need assistance.

My vision of the future, and it’s shared by many, is that people with disabilities, regardless of their age, regardless of their status, regardless of their history, will be able to live in the community where they choose in affordable, accessible settings, and they will be able to receive personal care assistance as they need it. Some will say that’s impossible, that it will cost billions of dollars, but the reality is that we’re now spending billions of dollars and we’re keeping people in institutions where they cannot be productive and they cannot enjoy a very high quality of life.

There are other issues that need to be addressed, too. For example, the internet is not well regulated and many people with different disabilities have difficulty participating in web conferences, webinars or online activities, because these are not fully accessible. If you’re blind, you can’t see what’s on the screen, and not very many services provide descriptions for blind people the way we provide captioning for deaf people. In fact, not very many of these services actually provide captioning for deaf people who can see the screen but who can’t hear what anyone is saying. It’s also an issue for some people with cognitive impairments or learning disabilities. The virtual world needs to be made fully accessible.

Finally, I would say health care needs to be provided on an equal basis for people with disabilities.

TMC: How has the COVID-19 pandemic impacted individuals with disabilities?

Frieden: I think the pandemic has actually opened some doors in the area of health care and employment. Regarding health care, many people with disabilities, particularly those living in rural areas, have difficulty reaching doctors and other medical professionals when they need to. They’re expected to make an appointment, show up at a certain time, and many people with disabilities find it difficult to be able to prepare themselves to travel and to organize travel and to arrive at a certain place at a certain time. They also may not have the stamina to wait a long time to see their caregiver and these are issues we’ve sort of ignored in our health care system. I think that the COVID experience has opened doors in the area of telemedicine, which can help resolve many of those barriers, and to the extent that we’ve been able to loosen and alter some of the restricting regulations related to telemedicine, that’s been a great benefit both to health care providers and to patients, and I think those provisions absolutely must be extended and made permanent.

We’ve also exposed opportunities in the employment world for people with disabilities through COVID-19. Before the pandemic and before the lockdown, employers generally had the attitude that people only worked efficiently when they were in an office space and they were very reluctant to have employees work from home. It was a real barrier for people with disabilities who could work very well in a home environment but who might not have the support they needed in an office space—and employers were not willing to provide that support. Now, I believe employers have been reassured—and many of them have been surprised—by the productivity of their personnel using the remote workplace and the at-home environment. Employers have been surprised that their employees have actually been more productive in the home environment than they were in the office. So, post-COVID, I think the telework scheme will be extended and I think people with disabilities will be able to work using that paradigm and be employed doing so much more readily than before.

Still, for people with disabilities who need assistance outside the home, they have endured some risk because people are necessarily coming and going from their home and they don’t have control over where those people have been before they came to their home. Furthermore, many people feel like it may be impolite to ask someone coming to their home to provide a temperature check and fill out a sheet about where they’ve been—and that puts people at risk. They also cannot maintain social distance if they are doing hands-on assistance with somebody, so that is an issue of greater concern for people with disabilities who need help.

I’m happy to say, though, that we are not, at this point, aware of a great deal of transmission that has occurred under those circumstances. The greatest concern are people who are living in clustered settings like assisted living facilities and nursing homes. We know that people in those situations are at a huge risk and many of them have been infected by the virus and a number of them have died.

TMC: What aspect of your disabilities activism brings you the most pride and satisfaction?

Frieden: That’s hard to say. I try to do the best I can at everything I do and that’s been my approach from the time I was a child. I’ve had many opportunities and have been fortunate to be engaged in some significant initiatives including the ADA, but we also have accomplished a lot in Houston and in Texas. I’ve been a part of groups that have achieved a great deal from the standpoint of empowering people and I have also had the good fortune to have support from many people and many institutions. Since I broke my neck in 1967, I have had the opportunity to be affiliated with TIRR Memorial Hermann. I was first a patient there and then I was a research assistant there and later on I founded a program and directed the Independent Living Research Utilization program. We were also successful in competing for federal grant funds to establish the Southwest ADA Center. I was also very happy and proud to have helped in the development of a network of centers for independent living programs run by disabled people located in every state—more than 400 in the United States at this point in time. Altogether, these have all been important advancements and I’ve been fortunate to be at the right place at the right time and to have the foresight and the time to engage myself 100 percent in trying to engineer a good outcome—and I haven’t stopped working on any of these. I’m always trying to imagine the next step forward.