On the 15th anniversary of the devastating storm, a Texas Children's doctor recalls his experience as a young intern in New Orleans during Hurricane Katrina 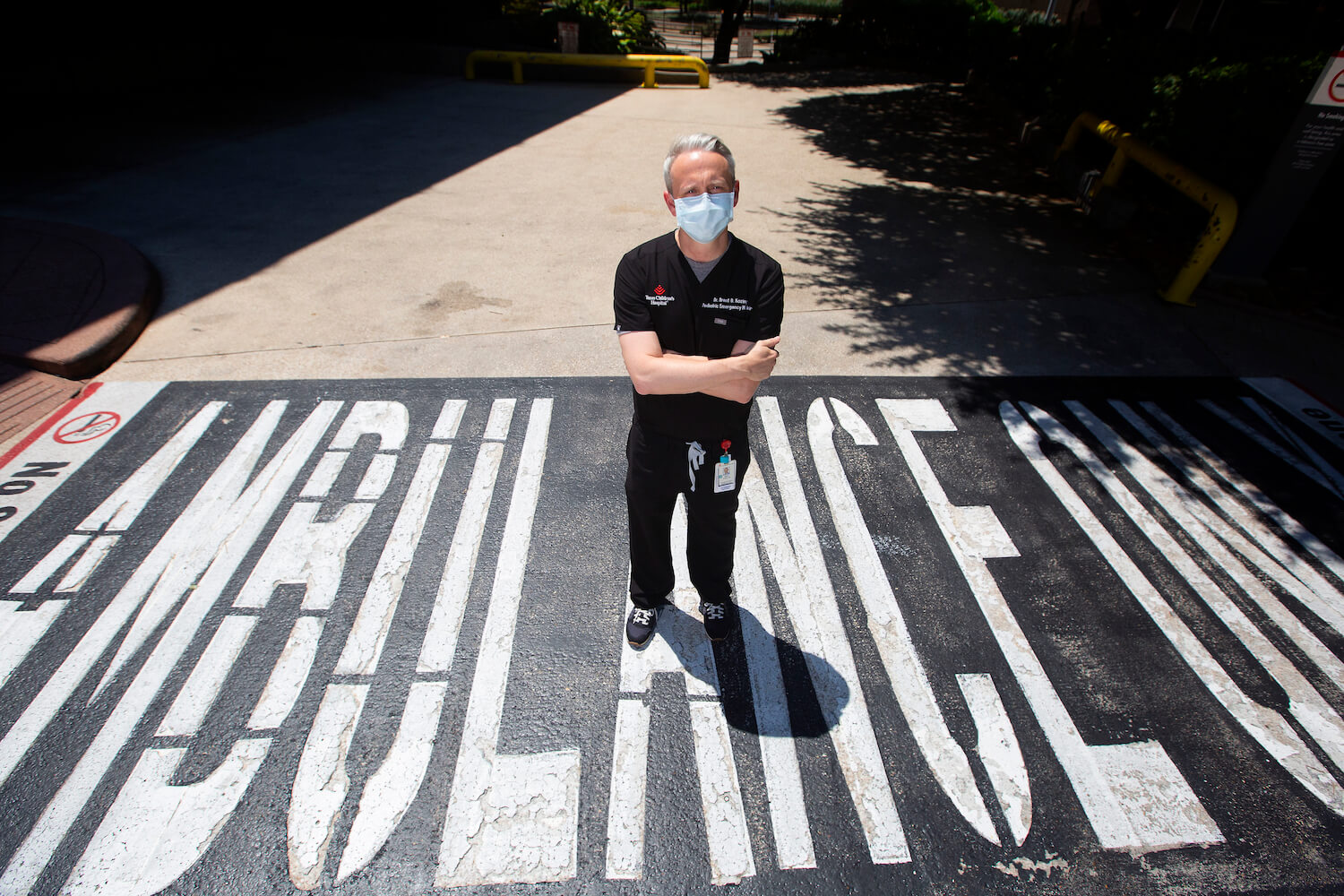 On August 29, 2005, a storm surge caused by Hurricane Katrina breached more than 50 flood barriers around New Orleans, Louisiana, leaving 80 percent of the city under water. The Big Easy was by no means prepared and the devastation was unprecedented.

Brent Kaziny, M.D., was finishing his second month as a pediatric intern at Tulane University when the storm hit. He was the on-call resident for acute care patients at Tulane Hospital in downtown New Orleans and his experience in the following days would shape his career forever. 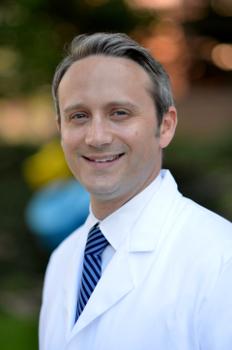 “They essentially told us to be prepared to stay in the hospital for an indefinite period of time,” recalled Kaziny, now the medical director of emergency management at Texas Children’s Hospital in Houston and an assistant professor at Baylor College of Medicine.

But Kaziny had been through hurricanes before—he grew up in Houston, after all. He’d had a strange feeling about Katrina, but still he anticipated long periods of down time and minimal new admits during the storm, so much so that he remembers packing DVDs.

“I was prepared, but in the completely wrong way,” Kaziny said. “As the storm approached, we did all the things we needed to do. We moved patients into the hallway, got them away from the windows, those sorts of things. And then there was this sense after the storm had kind of passed like, OK, we got through that—it was rough, but not horrible. We still had power, we still had running water; patients were doing well.”

And so, a tired Kaziny nodded off.

Then the levees broke.

By the time he woke up, the streets were flooded. Soon after, the hospital lost electricity and it became clear that everyone would need to evacuate.

“It just became a thing where we were just doing whatever needed to be done,” Kaziny said.

He followed the direction of a young pediatric critical care doctor at the hospital, Leron Finger, M.D., who still works in New Orleans.

“For whatever reason, he became instrumental in working on the evacuation, not just of the pediatric patients, but others,” Kaziny said. “It was just kind of, ‘Do what Dr. Finger says,’ so it would be these little tasks, like taking every oxygen canister in the entire hospital building and bringing them to the parking garage.”

Kaziny and others then worked to move the patients from the hospital and into the parking garage that was connected by a land bridge. They created a makeshift helistop on the roof of the garage.

“We would triage the patients on the level below the roof of the parking garage, and then as helicopters came in, we would push patients up in stretchers, get them on the helicopter and then they’d take off,” Kaziny said. 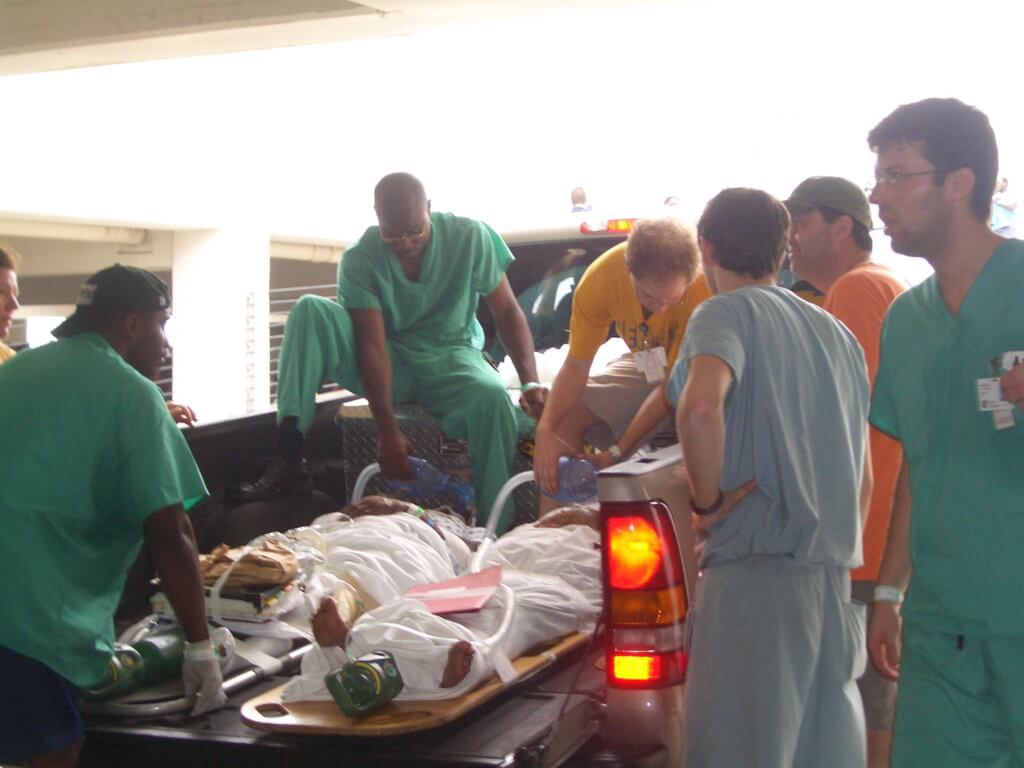 Brent Kaziny, M.D., in light blue scrubs with a hand on his hip, helps evacuate patients during Hurricane Katrina. (Photo provided by Kaziny)

The entire process was one of survival, a question of how to get patients to safety as quickly as possible. They were flown to hospitals scattered throughout the region, including many in Houston. Electronic medical records were still a thing of the future and cell phone service was down throughout the city. Continuity of care—and any kind of coherent communication—had washed away with the storm.

“We were literally just sending the entire paper chart with them, like the plastic binder for the bedside chart with all the notes and everything—literally just sticking it in the helicopter with the patient and sending them on their way,” Kaziny said. “What else were you going to do?”

Parents were not allowed to fly with many of his pediatric patients and oftentimes it wasn’t clear where the helicopter was headed.

“I just took a Sharpie and I said, ‘Write on your kid’s shirt or on your kid’s arm or something. Just say, whenever you get to wherever you’re going, call this number, and have it be a family member that’s not in New Orleans—somebody that the hospital can reach,’” Kaziny said. He had tried to send short text messages to his parents on his Nokia cell phone, hoping a flicker of a signal would push them through.

At the time, it struck him that there weren’t better protocols in place for evacuations and other emergencies.

“It shouldn’t be a second-month intern that’s helping these families navigate these challenges,” he said. “That’s really what spurred my interest and my desire to get involved in disaster medicine.”

Kaziny remained in downtown New Orleans for 4½ days after the storm, helping with patient and staff evacuations. Then it was his turn to board one of the helicopters on the roof of his hospital’s parking garage. He was flown to the airport in New Orleans, then took a bus to Lafayette, Louisiana. On the way, he was finally able to call his parents in Houston.

Back home in Houston, Kaziny was anxious to return to his studies and to patients. But he, and his program at Tulane, were in limbo. Eventually, Baylor College of Medicine and Texas Children’s Hospital offered to help. They allowed a group of Tulane’s pediatric residents into their program for the remainder of the academic year.

“I was a Tulane intern at Baylor,” Kaziny said. “They even made us Baylor College of Medicine ID badges with the Tulane logo on them. Everyone tried to make it work as best as possible.” 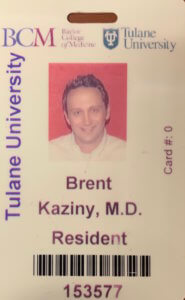 Kaziny’s ID badge after Baylor College of Medicine took in many of the Tulane University residents.

But when the year ended, Kaziny felt pulled to stay with his pediatric patients at Texas Children’s, so he formally transferred to Baylor to complete his residency. He then chose a fellowship at the University of Utah because, at the time, Utah had one of the few pediatric-specific, state-run disaster response teams.

“Anything that was disaster-related, I just kind of soaked up,” Kaziny said.

In 2012, he was recruited back Texas Children’s—in time to help prepare for the 2014 Ebola outbreak, 2017’s Hurricane Harvey and now the COVID-19 pandemic. Perhaps the most important lesson he’s learned along the way is the value of communication.

“One thing that we always focus on in any sort of emergency management or disaster response is the importance of communication,” Kaziny said. “I think we’ve seen a lot of mixed messaging as a country during this COVID response, but one thing Texas Children’s has tried to do is to have a unified message. We want to get something out to people that is accurate, but it also needs to be done in a timely manner because things change and things evolve.”

In the case of lost power or cell phone service, Kaziny said, Texas Children’s has a number of redundancies in place—including the use of runners and ham radios—so person-to-person communication remains intact. Kaziny has also worked with national leaders to improve family reunification efforts in the event of a disaster, a major upgrade to the Sharpie-on-a-shirt method.

He always emphasizes the responsibility of personal preparedness in the case of an emergency, especially among those working in hospitals.

“As health care professionals and providers, we have a responsibility to our hospital, our city, our community, to respond to these events. And it’s impossible for us to do that if we’re not ready for what might happen in our own home first,” Kaziny said. “I couldn’t go to the hospital during Harvey and stay there for five days if I was worried that my family wasn’t going to be safe. I think that’s an important piece to all of this that is oftentimes overlooked.”

It’s just another way of saving lives—something a young intern at Tulane, who had planned a career in pediatric cardiology—began doing 15 years ago today.