A new Mogie in the house

A new Mogie in the house 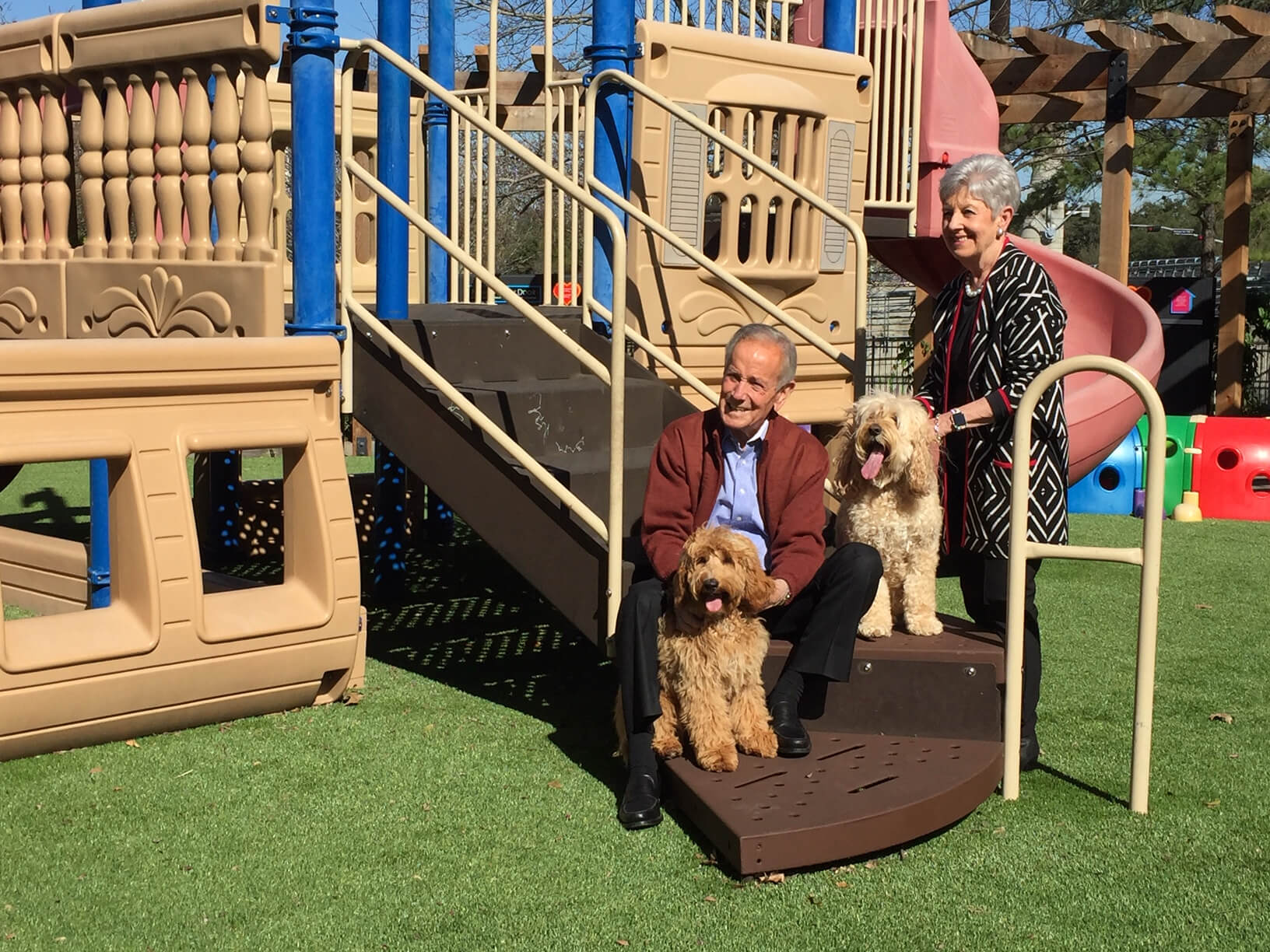 There’s been a “passing of the bone” for Mogie, the mascot and most famous resident of Ronald McDonald House Houston. Now retired to life in a private home, he has bestowed his responsibilities upon a new house dog.

The golden-locked Australian Labradoodle, who spent a decade comforting young patients and their relatives, made his final appearance as a mascot at the Trafigura Run for the House on Dec. 1, which coincided with his 10th birthday weekend. In February, he met the new Mogie—an apricot Labradoodle puppy born in July 2018—for a playground photo shoot with their benefactors, Louis and Marilyn Mogas.

The idea for a house dog came from a former Ronald McDonald House Houston CEO who wondered how having a pet at Holcombe House, the organization’s temporary residence for sick children and their families, would improve the experience for guests. Around the same time, Marilyn Mogas, a longtime volunteer and her husband, Louis, founder and chairman of Mogas Industries, stayed at the Fairmont Copley Plaza Hotel in Boston, which has its own canine ambassador.

Investigating options for a non-shedding dog of the right size and temperament led to a search for a cross between a Labrador retriever and a poodle. A call to Lone Star Labradoodles was returned by Lanie Smith, who had experienced long days and nights in hospitals with an ill child.

“My oldest son had cancer. We battled it for eight years and spent a lot of time up at the Texas Medical Center,” Smith said.

When that call inquiring about a dog came in 2008, she quickly decided to donate.

“I’m an animal lover. You’ll be in the waiting room and clowns will come in or people come in and do crafts, but I wanted to see a dog. I never saw a dog,” said Smith, who lives in The Woodlands. “I knew dogs came into the hospital for therapy work. That’s what would have made me feel better.”

Mogie the friend and celebrity

“He’s touched a lot of lives,” said Marilyn Mogas, a board member and past president who started volunteering at the house three decades ago with Houston Junior Woman’s Club.

Bringing a furry bundle of personality to the Houston facility has been transformational for the Mogas family.

“Most likely it’s the most wonderful experience we’ve ever had,” Louis Mogas said, as his face reddened and his eyes welled with tears. “The whole place lights up and everybody wants the dog to sit on their lap.”

Mogie’s care has been a family affair.

“Our daughter is a veterinarian and so she has taken care of him over the years,” Marilyn Mogas said.

On his recent visit, Mogie did not forget to comfort guests or to indulge in some treats brought by volunteer Laura Hopeck.

Mogie’s departure coincided with the expansion and renovation of Holcombe House, the flagship facility of Ronald McDonald House Houston. Holcombe House reopened in late 2018 with 20 new bedrooms, bringing the total to 70.

Marilyn Mogas also served on the committee tasked with finding a new dog, but members agreed to keep the name.

Smith stepped up again by donating another dog.

The new Mogie, whose rambunctious nature signifies his age, took over duties at the house in November. He exercises his bark, as puppies do, but training is expected to reduce that inclination.

After the February photo shoot, a boy in a wheelchair was surprised to see both Mogies scamper into the building, though his comment was doubly meaningful: “I want Mogie.”

That energy motivates sad, fearful or exhausted children to move, to play and to be happy.

Regardless of generation: Mogie is in the house.