Fast-growing 3D “asteroids” are getting closer to mimicking the brain 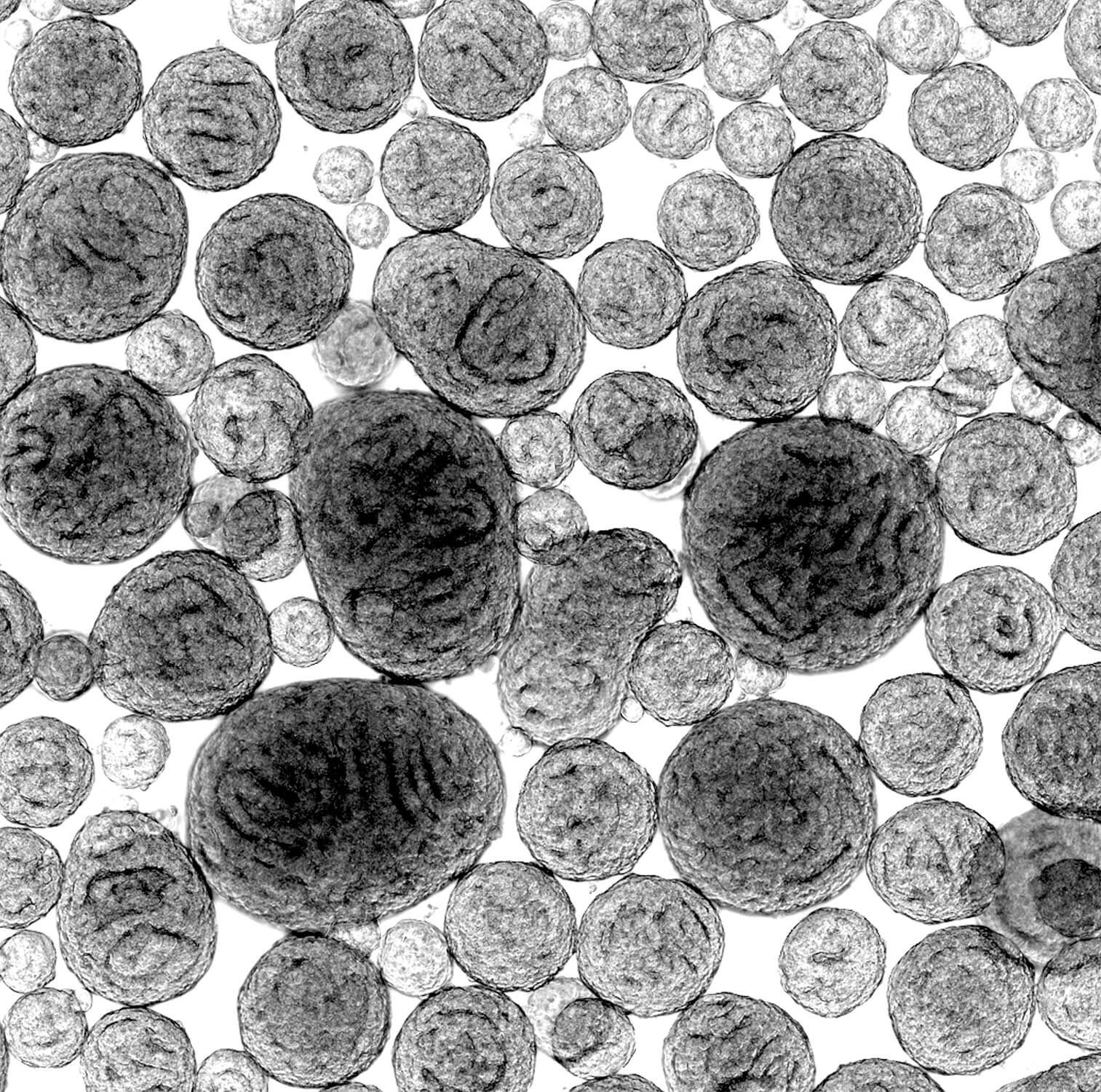 When neuroscientist Robert Krencik figured out how to fast-track the growth of mini-brains, he shared his process with the scientific community. Over the past two years, his method has been adopted in labs around the world.

Krencik’s lab-grown 3D models— commonly known as brain organoids or mini-brains—incorporate star-shaped brain cells called astrocytes. He named his creations “asteroids,” which seems fitting for a scientist based in Houston, a city obsessed with Astros baseball and all things NASA.

For Krencik, a Ph.D. who works at Houston Methodist Research Institute, a scientific breakthrough that accelerated brain research might have been enough. But it was just the beginning.

Now, he is focused on using his asteroids to uncover methods to repair the nervous system while also working to create the next generation of brain organoids—with hopes of better mimicking the actual brain.

“The term ‘mini-brains’ is misleading because they’re not miniaturized versions of the human brain—they’re actually small aggregates of cells. … Though they do have neural activity and recapitulate some aspects of the brain, they’re still lacking the multiple cell types of the brain and they’re not connected to sensory systems,” Krencik noted.

Still, their potential for studying disease processes or regeneration of the nervous system is staggering.

“To identify drugs to promote repair of the brain—after aging, injury, Alzheimer’s disease, neurodegenerative diseases, stroke—you need a model system that recapitulates the environment of the human brain. That doesn’t just involve a single cell type, but it involves multiple cell types including a vasculature, and it involves the extracellular proteins and matrix that make up the environment of the brain,” he said.

Krencik meets regularly with the neurosurgery department and Center for Neuroregeneration at Houston Methodist as he works to apply his research to the field of neuroregeneration.

“The large structure of the organoids allows us to study things that are important in neurosurgery, which you couldn’t study with traditional cell culture systems,” Krencik said. “Also, the fact that we can grow these long-term allows us to study regeneration, because the human nervous system—during development and after injury—takes a long time to form synaptic connections.” 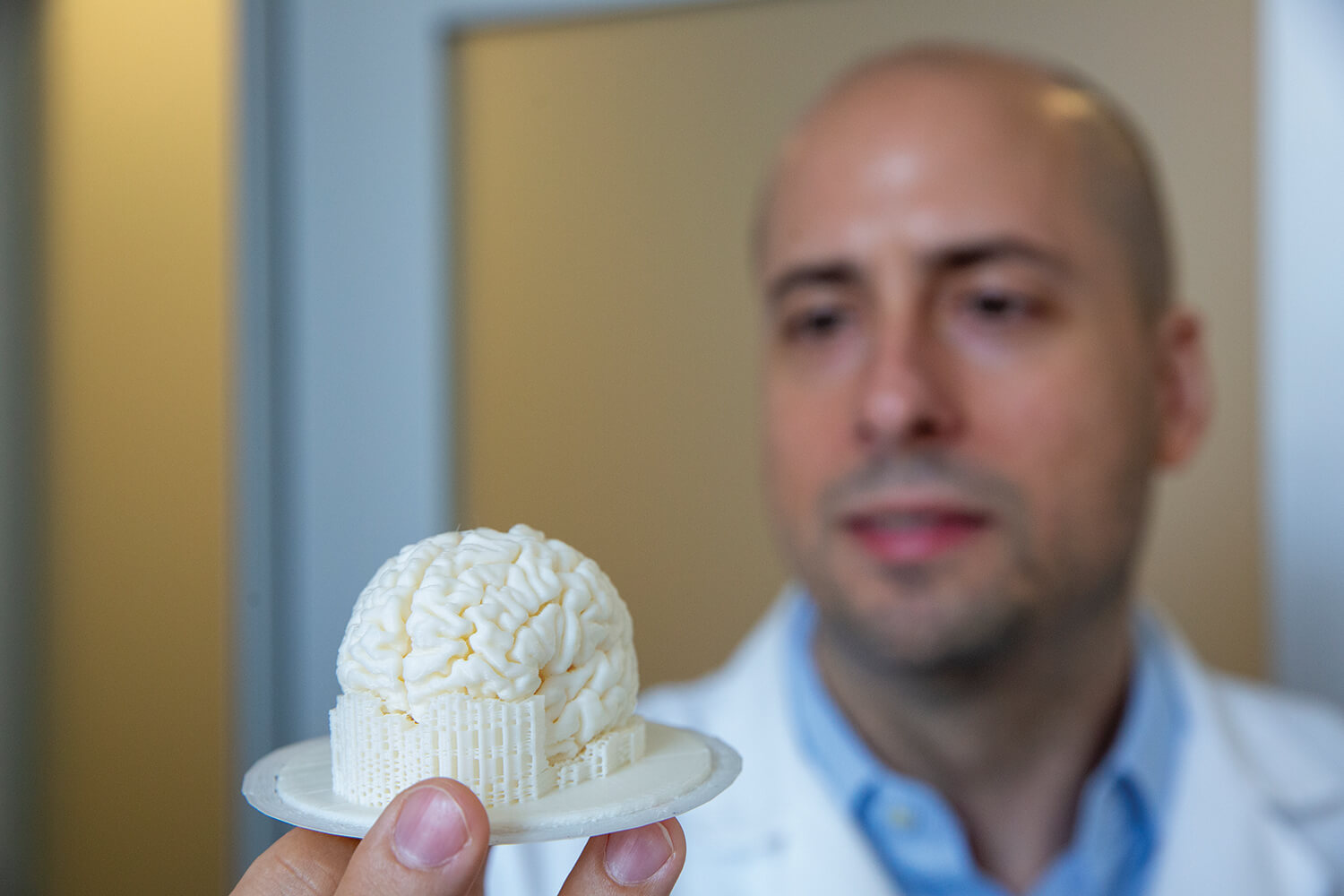 Robert Krencik, Ph.D., a neuroscientist at Houston Methodist Research Institute, holds up a 3D printed model of a human brain in his office.

Krencik’s lab uses a method called trans-differentiation to rapidly generate neurons from stem cells, which allows the researchers to force cells, through genetic engineering, to directly differentiate into a pure population of neurons within one week—instead of waiting for them to slowly develop over several weeks, Krencik said.

“By assembling neural organoids with both neurons and astrocytes in specific ratios, we can reproducibly and rapidly generate a well-defined version we call ‘asteroids,’ instead of waiting for them to spontaneously mature into neural networks,” he said.

After the 2017 publication of his technique in Stem Cell Reports, Krencik and his team released a follow-up paper in JoVE—the Journal of Visualized Experiments—that included a step-by-step video on how to engineer astrocytes into mini-brains.

The 3D nature of the organoids provides significant benefits for research, and the accelerated maturation of Krencik’s asteroids means more science can be done in less time.

“By growing cells as large aggregates, as asteroids, you can study high density cells in complex three-dimensionality, similar to how they appear in the brain, and then, importantly, the cells form active connections to each other, otherwise known as neural networks,” Krencik said. “Because you can grow them with intimate associations long-term, it allows them to form those connections, and over time they can even display brainwave-like activity.”

The emittance of brainwaves from these organoids is an exciting step forward in the field. In August, researchers from the University of California in San Diego published a paper in Cell Stem Cell describing advanced electrical activity they observed in their brain organoids, which, notably, were created through their own unique method—not like Krencik’s asteroids.

“With the previous technology, we were seeing 3,000 spikes per minute, so neurons were firing at a rate of 3,000 in a minute, but we are actually detecting 300,000 spikes—so we are two orders of magnitude higher than we ever recorded in vitro, and that was shocking. We never expected to see that level of maturation—we never expected to see that from human neurons outside the body,” said Alysson Muotri, Ph.D., a biologist and professor at the University of California San Diego School of Medicine and a senior author of the paper. The brain oscillations followed a typical pattern of development of that of a growing fetus, Muotri added, with highly synchronized waves at approximately four months, but with increasingly complex oscillations by six to eight months.

“The synchronization was just transient, and they become more complex, and that’s what you would expect for the human brain,” Muotri said.

While Muotri stressed that their organoids are still far from being close to a “real” human brain, the existence of the neural networking required for producing these relatively complex brainwaves could have huge implications for studying human brain development.

“This opens the idea that we can now start to model things that are not only based on gene expression or how the shape of the brain is formed,” he said. “It can actually measure networks, and you could start moving into more psychiatric conditions, for example.”

The surge in brain organoid research is not without debate. Although scientists agree that current mini-brains are nowhere near able to display levels of consciousness, many researchers believe there should be discussions about an ethical framework for the future of the field—especially as there are talks of increased brainwave activity and advanced applications, including transplantation.

Krencik himself is looking at cellular transplantation therapy in his lab, which would use asteroids to replace brain regions that have degenerated or been destroyed due to injury, disease or stroke.

“We’re currently trying to figure out safe and effective ways we can transplant these into a nervous system,” Krencik said. “One issue with the current method of cellular transplantation is that you put dissociated cells in, and they migrate away from the transplant site. So by transplanting these as intact asteroids, they can remain where desired and they can integrate over time.”

His lab is also exploring methods to pace activity of these neural networks at specific rates using new biotechnologies.

“We’re not just waiting around for these to spontaneously activate. We’re actually forcing them to activate on demand, which would make them a much better and controlled model system,” Krencik said. He added that his lab is also studying brain-computer interface communication and working on assembling organoids specified to different regions of the brain, for example, combining brain asteroids and spinal cord asteroids so that they can connect together and enable the study of communication between the brain and spinal cord.

It’s a promising area of research that is less time consuming, less costly and more comprehensive than earlier methods, but Krencik stressed the importance of recognizing its constraints as well as its potential.

“The current state of organoids do not have an immune system, they do not have a vasculature, so they are still lacking major aspects of the brain. But I think in future studies scientists are trying to figure out how to incorporate those additional features into the organoids,” Krencik said. “We don’t know where it’s going to go, but it does clearly have a lot of potential, and I think it’s stimulating the research community and education community to be interested in innovative neuroscience.”