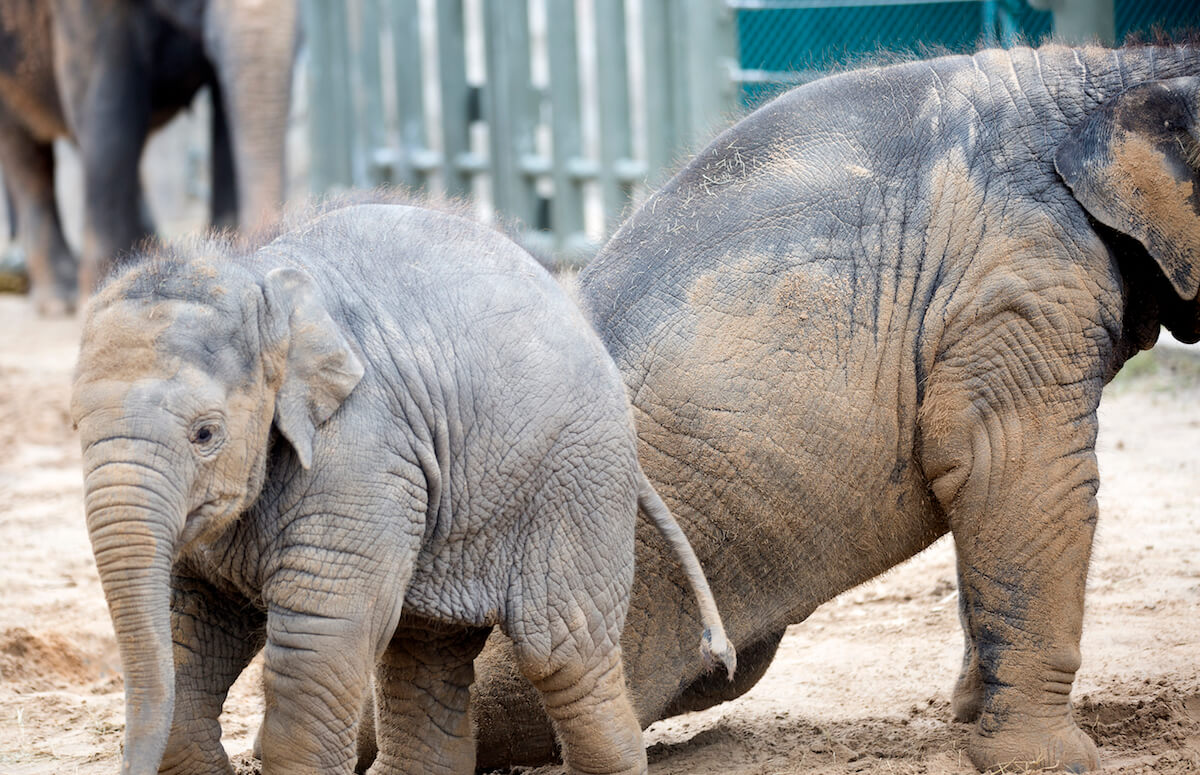 At 2:38 a.m. on Father’s Day this year, the Houston Zoo welcomed Tilly, a 345-pound newborn who brought the park’s elephant population to 10.

Her birth brought joy to a care team devastated by calf losses in prior decades because of elephant endotheliotropic herpesvirus, a highly contagious and deadly disease known as EEHV.

But thanks to a partnership created between the Houston Zoo and Baylor College of Medicine after the 2008 death of Mac—a beloved animal known for his playfulness and intelligence—the zoo hasn’t lost any elephants to EEHV in the last decade.

According to the Smithsonian’s National Zoo, the virus is responsible for half of the young elephant deaths in zoos. EEHV can cause hemorrhagic disease—similar to Ebola in humans—when transmitted to baby and adolescent Asian elephants. The virus is dormant in almost all elephants. Scientists believe that when a mature animal who developed immunity by surviving the virus at a younger age sheds EEHV, calves who recently have been weaned from nursing and are no longer protected by their mother’s antibodies become susceptible.

“It’s the age and the time of their primary infection,” explained Daryl Hoffman, Houston Zoo’s curator of large mammals. “The younger they are when they get that first primary infection, the better chances they have for fighting it off and surviving it. We want that primary infection, we want the germs to get spread around when they’re younger. And having a nice big herd helps that.”

But when young elephants are exposed a little later—after they are no longer protected by their mother’s antibodies and before their immune system has developed—EEHV can strike quickly and become fatal in just days.

“No doubt, it is the No. 1 killer of elephants in Europe and North America, across-the-board, hands down. Nothing comes close,” said Christine Molter, D.V.M., a Houston Zoo veterinarian who works closely with the elephant herd. Daryl Hoffman, Houston Zoo’s curator of large mammals, hands out snacks to Tilly and her herd.

The key to preventing death is detecting exposure earlier so that lifesaving interventions could begin sooner. And while there is no cure for the disease, early treatment—including fluid management, delivering intravenous plasma and even administering antiviral medication developed for human strains of herpesvirus—seems to dramatically increase survival rates.

Still, the zoo’s veterinarian team faced hurdles determining infection before the animals exhibited symptoms. And even then, testing for samples sent to the lab at the Smithsonian’s National Zoo in Washington, D.C., took days to return results.

A breakthrough came when the zoo got a call from Baylor College of Medicine, which assembled a team of researchers whose expertise, they believed, might prove helpful. Among them: Paul Ling, Ph.D., a herpesviruses expert and an associate professor in Baylor’s department of molecular virology and microbiology.

When he was first approached, Ling recalled thinking, “Who wouldn’t want to help save baby elephants?”

His first mission was to refine a decades-old diagnostic test to improve screening time and accuracy.

“In human medicine, people talk about bench-to-bedside,” Ling explained. “I framed this overall as bench-to-barn. I envisioned three phases: the first phase was diagnostics, the second phase was treatments and the third phase, longer term, was a vaccine.”

At the time, the scientific community already had a substantial amount of knowledge related to some of the genetics and had sequenced some of the elephant herpes viruses.

“We knew enough where we could probably develop tests that could catch and pick up most of the flavors of these viruses that were causing this disease in the elephants,” Ling said.

That’s when Ling and his team developed the qPCR assay, a blood test that refined the traditional polymerase chain reaction technique which detects herpesvirus DNA in the bloodstream. Ling’s qPCR test, which stands for quantitative polymerase chain reaction, is more sophisticated and can provide a more accurate amplification of a targeted DNA molecule in real time.

“We basically battle-tested it on a bunch of retrospective cases, so we were able to get samples from other zoos and other elephants, including the ones here at the Houston Zoo,” Ling explained. “We wanted to see what things looked like. How good is our test at picking up this virus?”

Ling and his team discovered that their test could find traces of the virus in the blood of young elephants before they even started to show any clinical signs of being sick—a groundbreaking and lifesaving detail.

“Once you get clinical signs starting to emerge in the elephant, you’re at a very dangerous tipping point,” Ling said. “You really want to try to start treatment before that happens.”

Armed with this tool, Ling and the Houston Zoo team developed a weekly monitoring program. The animals are tested every Tuesday. If any of the samples show increased viral loads, the elephant team knows to perform further testing and, often, initiate treatment.

“Definitely the early detection is the key to their survival,” said Hoffman, the large mammal curator. “We don’t have a cure. We can’t just say, ‘Oh, this one’s sick, we’re going to do X, Y and Z.’ We throw the whole alphabet at them and we’ve had success with keeping babies alive.”

“We’re very lucky because Baylor is very accommodating to our needs,” said Molter, the veterinarian. “If an elephant looks a little bit off or we’re a little bit worried on a Friday or even over the weekend, they’re willing to come in and do an extra round of testing for us, so we’re really grateful for that accommodation. It’s allowed us to provide the highest quality of care for the elephants here.”

Not only is Ling’s test more efficient, but the local laboratory location is a vast improvement.

“We literally walk across the street and have results within a few hours,” Hoffman said. 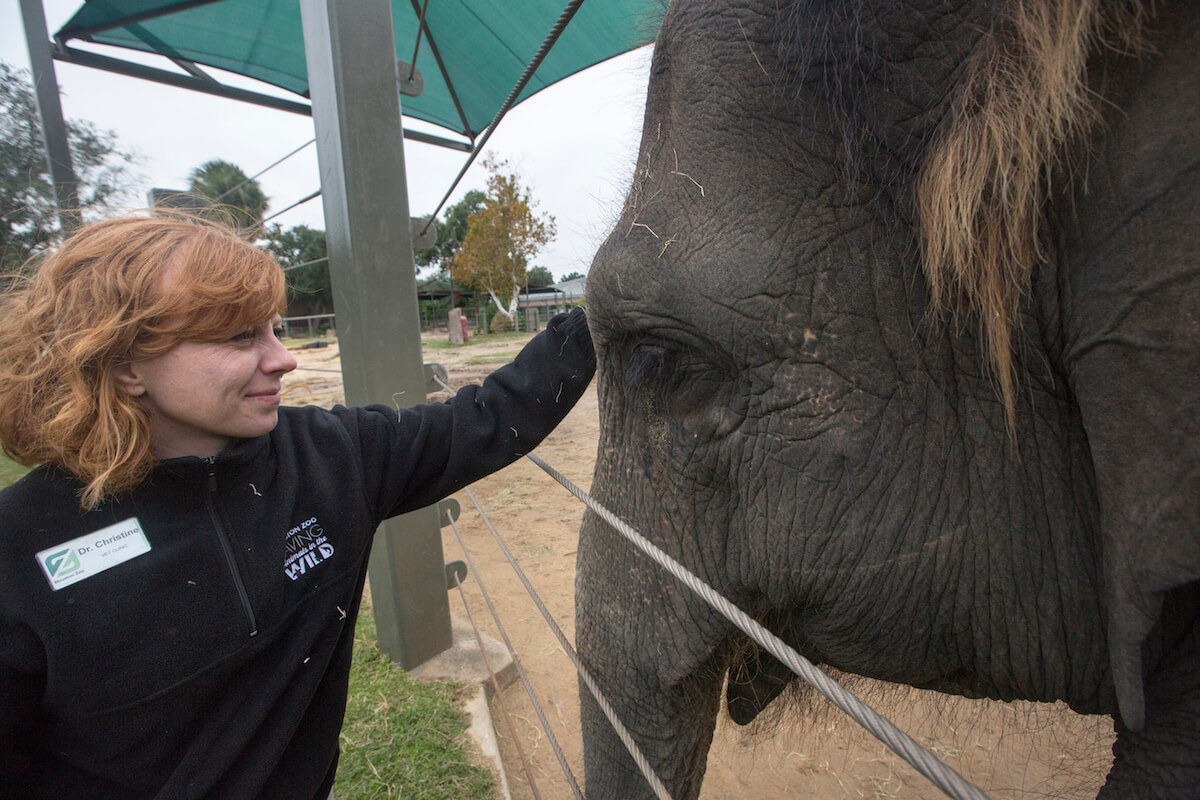 Christine Molter, D.V.M., a veterinarian at the Houston Zoo who works closely with the elephant herd.

The tools have been so successful that the tests developed at Baylor, and the early detection and treatment protocols designed by the Houston Zoo, are being modeled and shared throughout the world.

“Our EEHV protocol—a joint effort between the elephant department and the veterinary department and [Ling] making sure that we know what our emergency response is going to be, what our testing protocol is going to be, what our treatments are going to be—that’s something that we’ve shared with people all over the world to help them and guide them with treatments, which I know has been very well received and I know it’s been very useful for people everywhere,” Molter said, adding that their protocol served as the foundation for a printed guidebook distributed across Asia in multiple languages for individuals working with elephants in wild herds or under the care of humans, including those in the timber industry.

“That is probably one of the most impactful translations of our protocol and it is, I think, making a huge difference for people who may not have a lot of other resources for this available to them,” the veterinarian said.

In addition, Ling has worked with numerous universities to share his test so that they, too, can partner with their local zoos and provide immediate and lifesaving EEHV screenings.

“If you have a breeding herd of elephants, I think you have to have this type of relationship if you want to be successful,” Hoffman said.

“All of this would not have been possible without the partnership with Baylor,” she said. “They’ve really allowed us to go beyond providing high quality medicine to being able … to then share it with our friends and colleagues in North America, in Europe, and in ‘range’ countries. It’s taken us from just taking care of our own elephants here to taking care of elephants globally, including those in the wild.”

Indeed, experts attest that EEHV does infect wild elephants. The teams at Baylor and the Houston Zoo are hoping to apply their knowledge and tools to help save those endangered herds as well.

“It’s a prime example of animals in human care helping the overall population of elephants in the world, whether they are wild or not,” Hoffman said. “We get a lot of flak from extremist groups saying animals shouldn’t be in our care—elephants being a group of animals that people are very vocal about—and I think this is such a prime example that, without them here, they would go extinct in the wild a lot more quickly than they already are.”

Vaccine could prevent even more deaths

Testing is a piece of the puzzle, but both Ling and the Houston Zoo team hope that someday they can develop a vaccine for the virus.

“We spent quite a bit of time developing tools and using those tools to evaluate and look at the immune responses that normal, healthy adult elephants have,” Ling said. “They’ve been chronically infected with the virus, and so we look at that and say, ‘They’re handling the virus fine, and why is that? What’s their immune response look like to the virus?’ If we can get a sense of what that is, then maybe we can develop a vaccine that could induce that type of immune response.”

Molter said that while the vaccine wouldn’t cure the disease, it would prevent it from being deadly.

“The idea with the vaccine is that you would still contract the virus, maybe have some clinical signs, but you never progress to that very end point of fatality,” the veterinarian said, adding that every year they are making good steps toward its development.