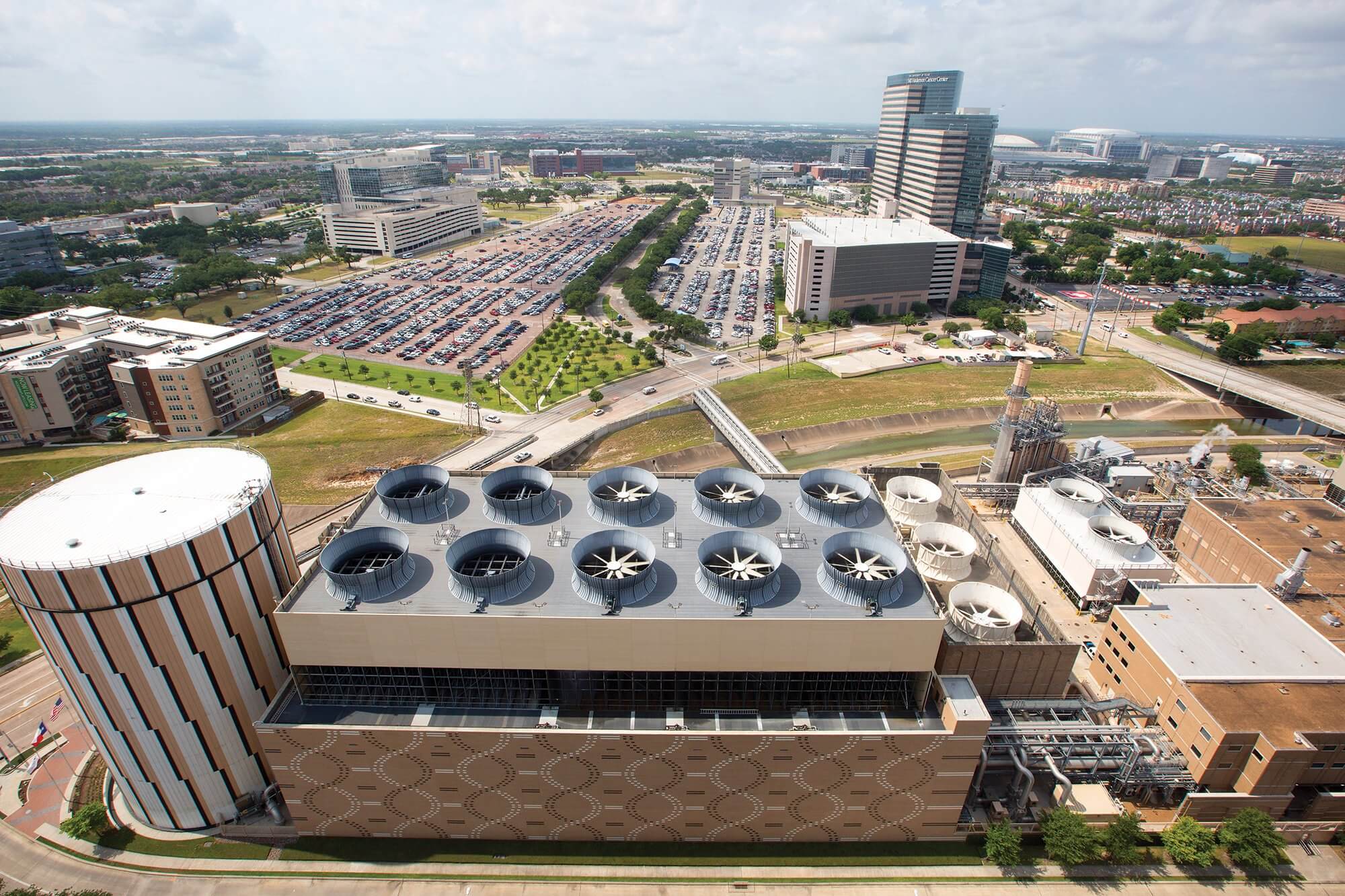 Behind a brown brick façade decorated with black and white double helixes—an homage to the district it serves—the Thermal Energy Corporation (TECO) is busy cooling and heating the Texas Medical Center.

“In reality, we’re a big part of the med center, but we’re a quiet part,” said Charlie Michalak, maintenance manager and long-time TECO employee. “Two hundred thousand people come in and out of this place every day. You would think they would know a little bit about us, but we don’t make a lot of noise. We just stay back to the side and do what we’ve got to do and make sure the medical center gets 24/7 coverage.”

Much like the heart supplying blood to the body through the veins, TECO pumps chilled water and steam to the medical center through a vast network of pipes. Thirty-six miles of steel pipe turn and wind below the TMC campus. How far below? The equivalent of a five-story building.

Sometimes, that massive underground infrastructure requires a disruption above ground. Recently, TECO construction crews have been hard at work outside the John P. McGovern Texas Medical Center Commons on Bertner Avenue, and up the street on E. Cullen in front of Baylor College of Medicine, occasionally delaying and rerouting traffic, to the frustration of medical center employees.

TECO’s state-of-the-art central plant, which sits on six acres between Pressler Street and Brays Bayou, houses a district energy and combined heat and power (CHP) system that produces chilled water, steam and hot water that is piped out to 46 buildings in the medical center. The not-for-profit also holds bragging rights as the largest producer of chilled water in North America, housing 27 chillers (including four 8,000-ton chillers) and a 150-foot tall thermal energy storage tank that holds nearly nine million gallons of water. There’s even a jet engine—strong enough to power a Boeing 747—that can generate backup electricity in the event of an electrical blackout.

TECO’s services play an important role in medicine, patient care and research. Chilled water provides air conditioning to keep buildings cool. Not only does this give patients and employees respite from the oppressive heat and humidity during Houston summers, but researchers gain environmental control in their laboratories. Maintaining a comfortable interior temperature allows equipment to function properly and ensures that research and experiments aren’t compromised.

In addition to heating buildings, pressurized steam is used to sterilize laboratory, medical and surgical instruments and waste materials (including pathogenic hospital waste) in autoclaves—industrial pressure chambers. The moist heat from pressurized steam causes the proteins in various microorganisms to denature and coagulate, effectively destroying the cell membranes and cooking the microorganisms to death.

This sterilization process is especially important to prevent patients from contracting diseases and infections caused by bacteria on medical or surgical instruments. At the Texas Medical Center, a place that hosts more than 10 million patient visits, delivers more than 25,000 babies and performs 180,000 surgeries every year, sterilized tools and instruments are paramount to patient safety and healthy outcomes.

“When somebody goes home from the medical center, I know they don’t tell their family, ‘If it weren’t for the doctors and TECO, I wouldn’t be here,’” Swinson said. “But we do kind of know it—not in an arrogant way. It is really personally fulfilling to do what we’re doing.”

Since it was established in 1969, TECO has focused on efficiency and reliability. Standard power plants typically use one-third of the fuel they produce, with the rest going unused. TECO’s system reuses and recycles electricity and waste heat produced from the plant, reducing emissions by 32,700 tons of carbon dioxide annually.

Despite the grand scale of TECO’s work, every tunnel in its infrastructure is dug by hand, an old-fashioned method that would seem to contradict the state-of-the-art technology and scientific advancements being made across the campus.

But Swinson said excavating tunnels by hand is the cheapest and most effective way to install large distribution lines that range from 6 to 60 inches for chilled water pipes and 2 to 16 inches for steam pipes.

“Because of the size of the pipe, it’s not possible to dig open ditches,” Swinson said. “They would be so large, they would totally disrupt the flow of traffic and pedestrians in the area.”

The tunneling process begins by digging three 5-feet-by-5-feet square tunnels—one for chilled-water supply, the second for chilled-water return and the third for steam supply and condensate return. Construction crews install oak boards to the inside perimeter of the tunnels every 6 inches, then lay down a set of tracks. Once pipe casings have been installed in each tunnel, the chilled water and steam pipes are connected to existing distribution pipes.

Because TECO serves the vast majority of buildings in the Texas Medical Center, individual institutions do not have to house, manage and operate their own cumbersome heating and cooling equipment in large mechanical rooms. Not only is this a more cost-effective and efficient system, but institutions are able to save valuable real estate for other things.

The TECO plant has had only one significant outage in 40 years.

As the Texas Medical Center continues to grow and add new facilities, TECO is also continually expanding. The cooperative is currently extending its network of pipelines to three buildings: Memorial Hermann-TMC’s Hermann Pavilion 2, Houston Methodist Hospital North Tower and Ben Taub Hospital. In addition, TECO crews have already completed the
construction of distribution lines around what will be the TMC3 translational research campus, scheduled to open south of the medical center in 2022.

“Today, TECO is one of the most efficient, reliable plants in North America,” Swinson said. “We really are to district energy what Texas Children’s is to pediatrics, what Texas Heart Institute is to cardiovascular disease, what MD Anderson is to cancer.”