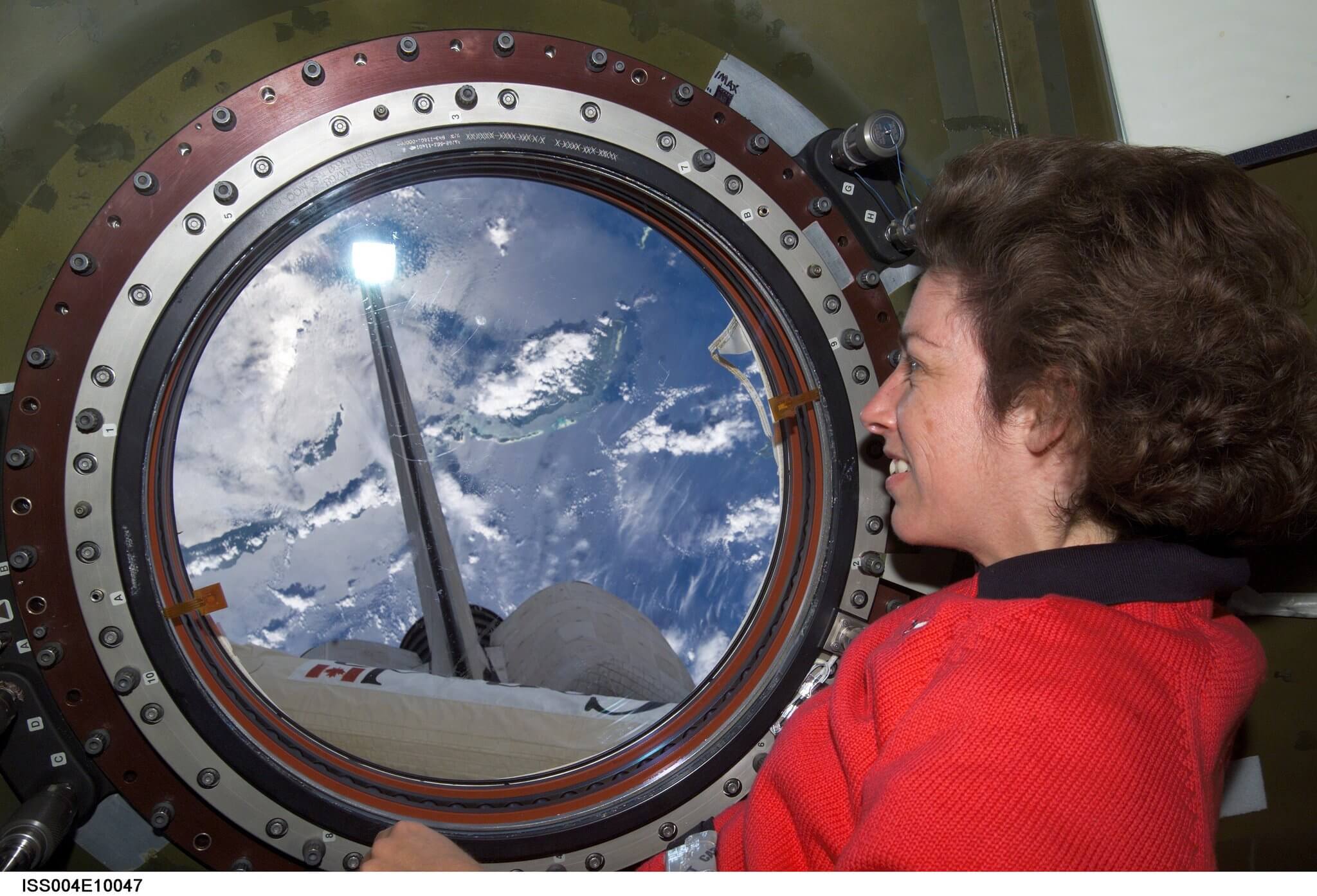 Veteran NASA astronaut ELLEN OCHOA, PH.D., has logged nearly 1,000 hours in space on four separate flights. She is the first Hispanic woman to travel to space and, in 2013, she became the first Hispanic and second female director of Johnson Space Center. Earlier this year, NASA announced that Ochoa will be inducted into the U.S. Astronaut Hall of Fame. 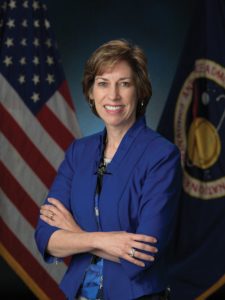 Q | You have quite the illustrious career. What would you say is your proudest accomplishment?
A | I feel lucky to have been part, overall, of human space exploration. To have been able to participate in the shuttle program and then also the International Space Station program.

With my four flights, two of them were really focused on scientific research—particularly the problem of ozone depletion and the ozone hole. Then the second two were part of the assembly of the International Space Station. When I see the space station now going strong—we’ve had people living on board continuously for over 16 years now—to have been part of that is the reward.

Q | As a kid, what did you think you were going to be when you grew up?
A | I didn’t have a really good idea. There were a couple years I remembered thinking I might be a lawyer. I wasn’t one of those kids that figured it out early and said, ‘This is absolutely what I want to do.’

The Apollo program was going on while I was in elementary and middle school. I was 11 when they landed on the moon. The whole country was watching that, but I can’t say at that point I decided I wanted to be an astronaut. There were no woman astronauts. Nobody ever would ask a girl, ‘Is that something you want to grow up to do?’ It was beyond what you would even think about at that point.

It was really later when it was something that I started to think seriously about.

Q | Did you face any particular challenges as a woman and a Latina studying STEM in the 1980s and 1990s?
A | I really didn’t see other people like me as I was going through school for physics and electrical engineering, and then earlier on in my career. That can make you feel like you stand out in a way that you’d prefer not to, at that point. There were only a very few instances when I felt like somebody was trying to discourage me.

When I got to NASA, which was in 1988, my first job was at Ames Research Center before I came here to Johnson. First of all, I saw a lot more women. I saw a lot more minorities. At that
time, NASA was maybe more welcoming and more focused on a diverse workforce than I had
seen prior to that. I’ve seen that only increase during my years at NASA.

Q | At what age or point in your life did becoming an engineer and an astronaut turn into a real goal?
A | It was really in graduate school. The first year I was at Stanford was when the space shuttle flew for the first time. Here was this new spacecraft that was quite different than anything that had ever been flown in space. It had larger numbers in the crew and a wider variety of things that the crew was doing. In particular, it was going to support all different kinds of science.

That to me was really intriguing because I was really headed toward being a research engineer at that point. The ability to do research but to do it in a completely unique environment was what made it become top of mind.

Q | You started your formal NASA training in 1990. Three years later, you went to space. What was that training process like?
A | The first year of training you come in as a class. There were 23 astronauts that were selected the year I was selected. A lot of it is originally classroom training; you have lots of workbooks to read. Then you start doing single system training. You’re in a simulator but you’re only worried about one system at a time. You’re learning how it operates—what switches you use and what to do when things go wrong. Then you graduate to a full-up trainer where all the systems are simulated with all of their interactions.

Your second year of training you get more specific. For example, I started to do robotics training. I did a little bit of spacewalk training, but not very much because by the time I was really going to get into it, I got assigned to a flight and I wasn’t going to be doing a spacewalk on that flight. After two years is when I was assigned to my first crew. I spent a year really training with that crew and for that mission.

Q | What was the most difficult part about being in space?
A | I think it’s that you’re responsible for a lot of different things as a crew member. You have different responsibilities in different phases of flight. You’re trying to remember lots of things at one time. It’s like cramming for a final or for a whole set of finals.

Q | One of the most intriguing aspects of being an astronaut is returning from space. What was that adjustment like for you?
A | When you first land you feel very heavy, but that goes away pretty quickly. There are also neurovestibular changes. You can find it hard to walk straight. You can feel like you’re dizzy.
If you lean down or lean one direction it feels like you’re being shoved in that direction and can spin a little bit. I would say those are the things you most notice when you land.

Q | Having that weightlessness and floating in the air has got to be priceless.
A | It is. It’s quite unlike anything else that you do. It’s fun.

Q | Can you describe what it was like?
A | You have to work out different ways of doing things. If you’re going to be working on a particular piece of equipment or something, you have to be very methodical because you can’t
ever put anything down unless it has Velcro on it. You have to make sure you’re really thinking step by step and being very deliberate so that things don’t float away or you don’t have some
unintended consequence.

Of course, some things are easier. If you’re trying to move what would be a very heavy piece of equipment on Earth you can do that much easier in space. You can move your body upside down or sideways if that helps give you better leverage as you’re trying to do a task. If you want to move across the cabin you can push off with one fingertip and that gets your going. If you push any harder than that you’re going way too fast. You have to get used to all of that when you first get to space.

Q | Under your leadership, NASA has launched several research initiatives to detect and monitor diseases at very early stages, many in partnership with TMC member institutions.
A | Here at Johnson Space Center, we really value our collaborations with different institutions at the Texas Medical Center. I think we are very lucky to be located in Houston, where we have the largest medical center in the world. We have world-renowned experts in areas that are important to us, including radiation and, now, much more personalized medicine, which is becoming important to us, as well. 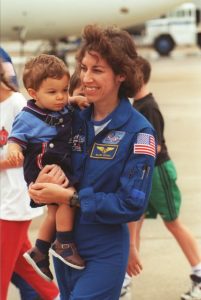 June 7, 1999 – Astronaut Ellen Ochoa, mission specialist, carries her son Wilson Miles-Ochoa following the STS-96 crew return at Ellington Field. The two had been reunited upon Discovery’s landing at KSC on the previous day (June 6) and flew to Houston on June 7. (Photo courtesy of NASA)

Q | For both male and female astronauts, it must be difficult to be away from families. You were a new mom before your third flight. That must have added a whole new dimension to your mission.
A | On my third flight, I had a 1-year-old. By my fourth flight, I had had my second child. My youngest turned two while I was in orbit, and the other one was three-and-a-half. For my third flight, I made a tape of myself talking to my 1-year-old and reading a book that he liked so that my husband could play it while I was gone. I thought, ‘Shoot, he’s only one. He’s going to forget about me.’ The mission itself wasn’t that long, but when you added in the week of quarantine ahead of time and the fact that you might delay before you launch, I figured I might be away three weeks, which is a long time for a 1-year-old.

Then on the fourth flight, I got a chance during the flight to actually talk to my kids, to do a video conference and talk to them once or twice on the phone. The 2-year-old didn’t really talk much at that point. My older one was almost 4. When I talked to him on the phone, I said, ‘What did you think of the launch?’

He goes, ‘Mommy, I got to ride in a plane.’ He flew on a NASA plane with my husband and with the other family members to Florida. Although he had been on a plane before, that was probably the first time he was really old enough to remember it. I go, ‘That’s really exciting.’ Then I said, ‘What did you think of the launch?’

He goes, ‘Mommy, it was a blue and white plane.’ He was completely focused on the plane ride to and from the Cape.

Q | Now that they’re grown, what do your sons think about their mom being an astronaut?
A | They’re 18 and 16. I think at various points while they were growing up, they thought it was cool. Now they’re over that, really. Plus, you have to realize that here in the Clear Lake area where we live, it’s not actually unique to have a parent who’s an astronaut.

When they were in elementary school, for example, it wasn’t uncommon for them to have some other kid in their class whose mother or father was an astronaut. In fact, my younger son was friends with a girl who was his age and both her parents were astronauts. It wasn’t quite the unique experience it might be somewhere else.

Q | What was the weirdest thing that ever happened to you in space?
A | After I got back to Earth on my first flight, I can remember going to bed the first night and waking up in the middle of the night. I felt like my body was floating off the bed. I could not feel the bed. I was just lying there with my eyes closed. If you’d asked me if I was floating I would have said, ‘Absolutely, I’m floating.’ I physically had to move my arms and legs to feel the bed to say, ‘I’m not floating.’ Then the second night I woke up in the middle of the night and it felt like half my body was off the bed and the other half was on the bed. That was very, very weird.

I actually had the opposite when I was in space. I woke up in the middle of the night and I could have sworn I was lying against a bed. I remember waking up thinking, ‘Wait, I thought I was in space. Why does it feel like I’m on a bed?’ Your brain is trying to figure out these new environments. When it doesn’t have something that it can correlate with, it makes up these things. It was really interesting.

Ellen Ochoa, Ph.D., was interviewed by Pulse reporter Shanley Chien. This interview has been edited for clarity and length.