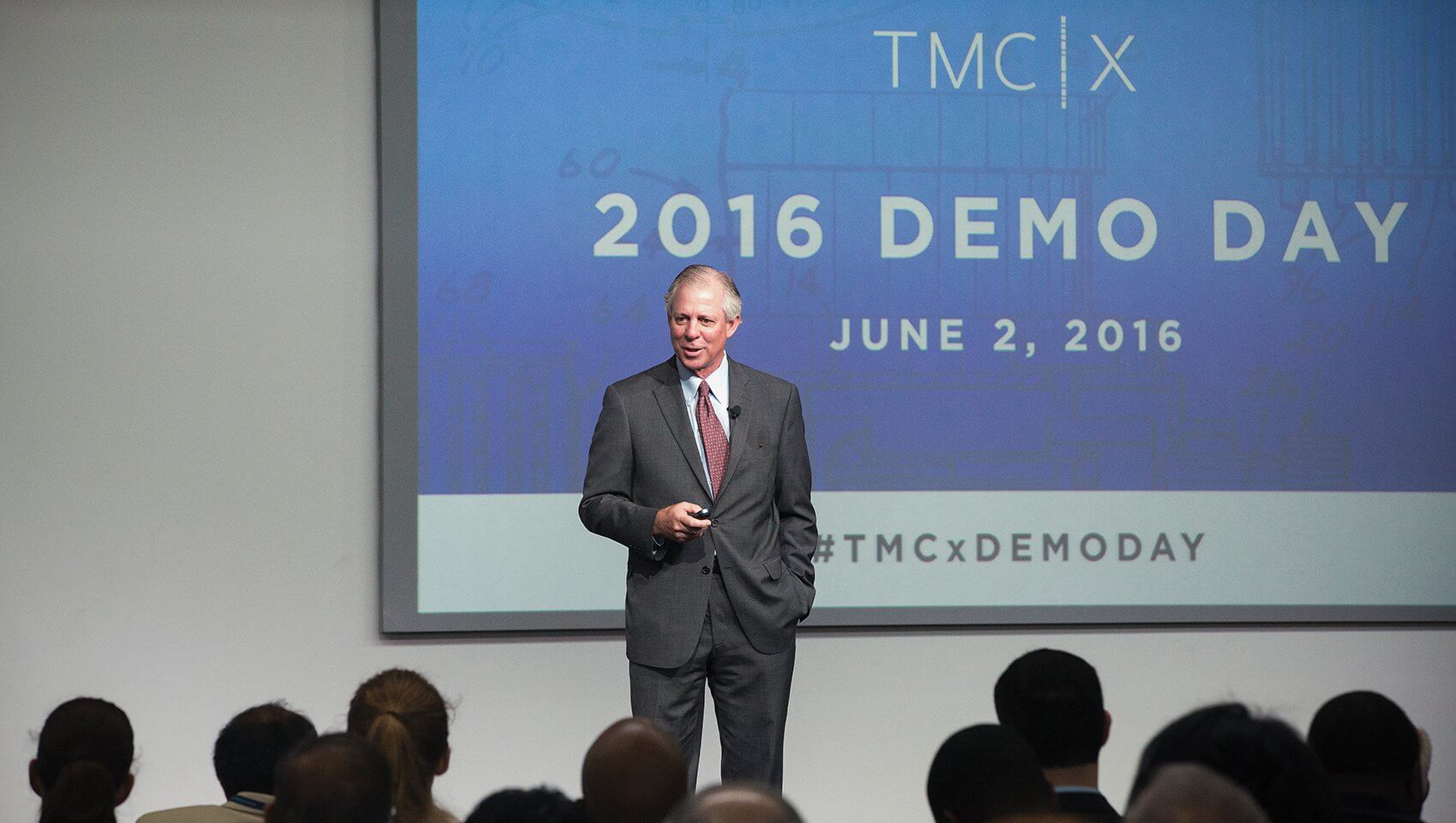 It was a graduation ceremony without the cap and gown, but with plenty of pomp and circumstance. The 12 digital health companies that were part of the second TMCx class, the Texas Medical Center’s accelerator program, topped off their journey just as they started, with a pitch.

Since late January, the entrepreneurs and their teams have logged hours with mentors, curriculum and hospital tours, learning how to tailor their messages. All of that hard work came together June 2, when each of them stood onstage in the TMC Innovation Institute, focused on the crowd sitting before them and poured all that experience into a three-minute pitch.

“Thank you everyone for coming out to be here, to all of you advisors and mentors who worked closely with the companies to get to where they are today,” said Robert C. Robbins, M.D., president and CEO of the Texas Medical Center, to the crowd gathered at the TMC Innovation Institute. “You are in for a great treat.”

TMCx Demo Day is a graduation of sorts for the entrepreneur teams, which were whittled down from more than 150 applications. Half were from around Texas and half were from other areas of the country.

Throughout the day, attendees were able to hear pitches from each company, as well as speak personally with the teams and learn about their plans for after the accelerator.

Over the 19-week program, the 12 companies have raised a total of $18 million in venture funding, successfully developed 27 customer engagements, including pilots and validation studies, and hired 16 employees. It gets better from there—two acquisition offers were made, which is the epitome of success in the startup world.

During his welcoming remarks, Erik Halvorsen, Ph.D., director of the TMC Innovation Institute, joked that it would be enlightening to see the initial 60-second and three-minute videos that the companies did upon starting the program four months earlier, and compare it to the day’s much more polished pitches.

Halvorsen joined TMC in January, and one of his first goals—having started several companies himself—was to make time to work individually with the companies coming into TMCx. He wanted to bring the experience and perspective he honed in Boston to the companies at TMCx, ultimately to see them advance and get into the market with their product.

“Today was a chance to see those results,” Halvorsen said. “Every single one of the 12 companies made tremendous progress and is getting great traction with TMC hospitals and other institutions around the country. That, to me, was rewarding and reassuring that we are on the right track here.”

Erin Flores, Ph.D., business analyst for TMCx, agreed, saying that in addition to the amazing turnout, all of the companies did well and the pitches were polished.

Comparing the two classes of companies, Flores said the current one was able to interact faster with stakeholders. That was driven by involving clinical experts in the initial selection process of the companies and the TMCx team having more time to build out those relationships since the last class, she added.

“The companies had immediate champions and have been able to build those relationships very quickly,” Flores said. “The progress they have made in the hospitals has been faster, and they have gotten a lot of relationships built that will bring them back to Houston.”

One of the keys to the success of the program has been its advisors. Throughout the curriculum, over
130 advisors, from both clinical and business backgrounds, shared their experience and knowledge with each of the companies, including helping with mock board meetings and providing time for one-on-one sessions.
To celebrate that involvement, an advisor introduced each company on Demo Day.

Ayse McCracken, a health care advisor and strategic consultant, has followed the companies from the beginning and said they showed significant progress in the maturation of their businesses.

It started with classes and being part of the education process, helping them understand how to build a business. Not only were they moving their businesses along, but they were taking what they were learning and applying that to advance their companies, she added.

“They get to rub elbows and get guidance and advice from some of the top leaders in health care, and that is a phenomenal opportunity for them,” McCracken said.

CareSet Systems, which provides data based on unreleased Medicare data, finished the TMCx accelerator program with a closed seed round and four new customers, including National Cardiovascular Partners.

Dwight Clark, director of finance for National Cardiovascular Partners, introduced Laura Shapland, CareSet CEO, at Demo Day, explaining that his company partners with the best cardiologists in the country, and CareSet demonstrated itself to be the right partner to work with. His company signed a two-year agreement with CareSet in February.

Shapland said the TMCx experience enabled CareSet to get the inside track from people in the medical center on what it was like to be sold to by a vendor or startups.

“You have your messaging in your mind, and you think it sounds great, but to know how it is received by them, it is good to hear that feedback,” she added. “We have deepened our connections in the Houston area, gained new advisors and more than a couple new fans, I hope.”

Other companies involved in the second class also saw improvements.

“A lot of changes have been internal, and that has been the biggest positive coming out of TMCx for us as an organization,” said Richard Munassi, M.D., chief operating officer of DocResponse. “We learned how to look at target markets and how to best interact with high-level stakeholders in the Houston medical scene, as well as outside of Houston.”

He said being in the TMCx program was incredibly valuable for his company, which developed a medical assessment solution that generates differential diagnoses. Harvard Medical School found DocResponse to be the most accurate assessment software in a landmark study published in the July 2015 British Medical Journal that looked at platforms across four countries.

“Prior to coming to TMCx, we had been selling to hospitals, but we didn’t know how it worked in the background, and within the medical center, you have access to people you don’t typically have access to,” he said. “All you have to do is walk down the street, and you get to understand how clinicians work, get feedback on your product and be able to incorporate that into your strategy.”

Meanwhile, the third class, which will focus on medical devices, begins in August. TMCx has received more than 200 applications and will be announcing the companies later this summer.