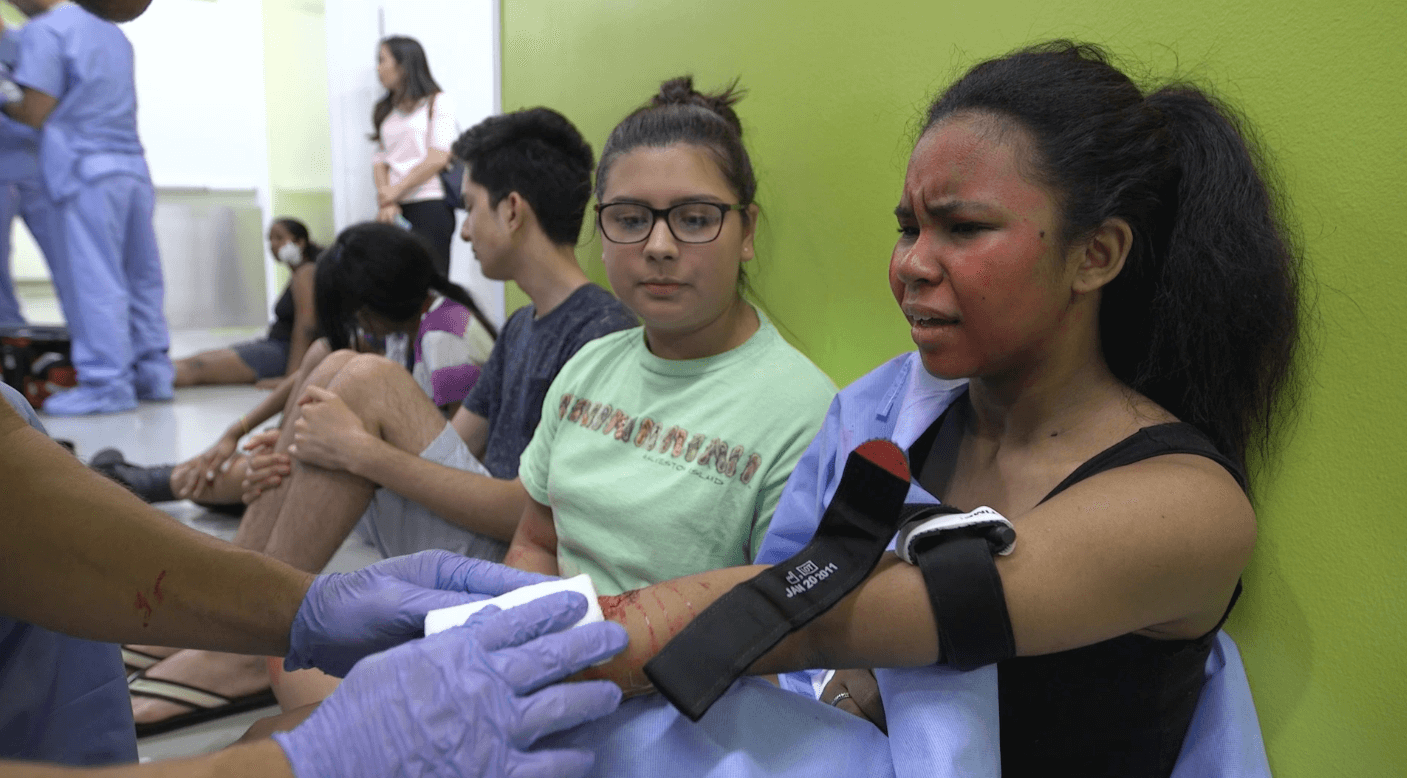 Approximately 20 FBI agents from across the U.S. participated in the training exercises that consisted of three different scenarios, including one that was all too familiar after the recent Orlando shooting on June 12 that killed 49 people and injured 53 others: a nightclub shooting with mass casualties.

The laboratory rooms were decorated with strobe lighting and blasted loud nightclub music, while volunteers were costumed in fake blood and wounds to create as realistic of an environment as possible for the agents.

“The recent events in Orlando, obviously, were very tragic,” said Michael Biamonte, instructor and coordinator at the FBI School of Operational Medicine. “The fact that we have a nightclub scenario built into our program this week was completely coincidental. That was a scenario that was setup before the Orlando tragedy took place, so it’s still very fresh in everyone’s minds. I think it hits home with a few people to say, ‘OK, this could really happen. This isn’t just training. We need to prepare for this.’”

Each SWAT team includes at least one medic to quickly respond to emergency situations and provide immediate medical assistance at the scene, making trainings such as these a critical component in ensuring federal agents and local first responders are well prepared and well trained to protect the public.

According to Angela Mitchell, operations manager at MITIE, the facility’s operating rooms are customizable for any type of simulated training environment for physicians, but it is also equipped for federal and local law enforcement agencies to use for emergency medicine training exercises with multiple injured victims and live threats.

“You don’t really know how you’re going to react to a situation until you’re actually in that situation,” Mitchell said. “Having these trainings and running the [agents] through the scenarios is the most important thing you can do to prepare them, because you don’t know how anybody is going to react.”

During training simulations like these, the key element Biamonte looks for in his agents is how effective and situationally aware the teams are with the limited time they have to take action.

“Our goal is to make sure that our medical operators know exactly what they’re supposed to do on scene to save someone’s life within those first 30 seconds to two minutes, even if it’s something as simple as stopping the bleeding, opening the airway and moving that patient,” Biamonte said. “If they do nothing more than that and do it well, we’ve achieved our goal. We’ve pushed them very hard and put them in stressful situations, but at the end of the day, we want to make sure that they can take care of whatever is going to, for a lack of better terms … is going to kill somebody in the first 30 seconds to two minutes. That’s our goal.”

The FBI conducts these training exercises on a quarterly basis to better prepare agents and medics to efficiently and effectively respond to different life-threatening, chaotic situations, but Biamonte said it is also to foster interagency teamwork and collaboration.

“The Bureau is a small piece of the bigger puzzle when you look at any sort of active shooter scenario, mass casualty incident wherever it may take place,” Biamonte said. “We’re one piece of that team that comes in to make the scene safe, to take care of people [who] have been affected by it. We work very closely with local law enforcement, with local EMS, fire department, [and] we make every effort to work together with all of our partners to make sure that the care that we’re providing is going to be seamless with the care that they’ve already received or are going to receive.”

In addition to training in the nightclub scenario, agents also practiced responding to a building explosion and securing the scene from any active threats.

With mass shootings and acts of violence on the rise, the FBI published a guide that the public can use as a reference for what to do in the event of an active shooter situation. Click here to view and download the guide.