Houston attorney Daniel Knight shares the physical and mental struggles of living in quarantine, but finds hope in donating plasma 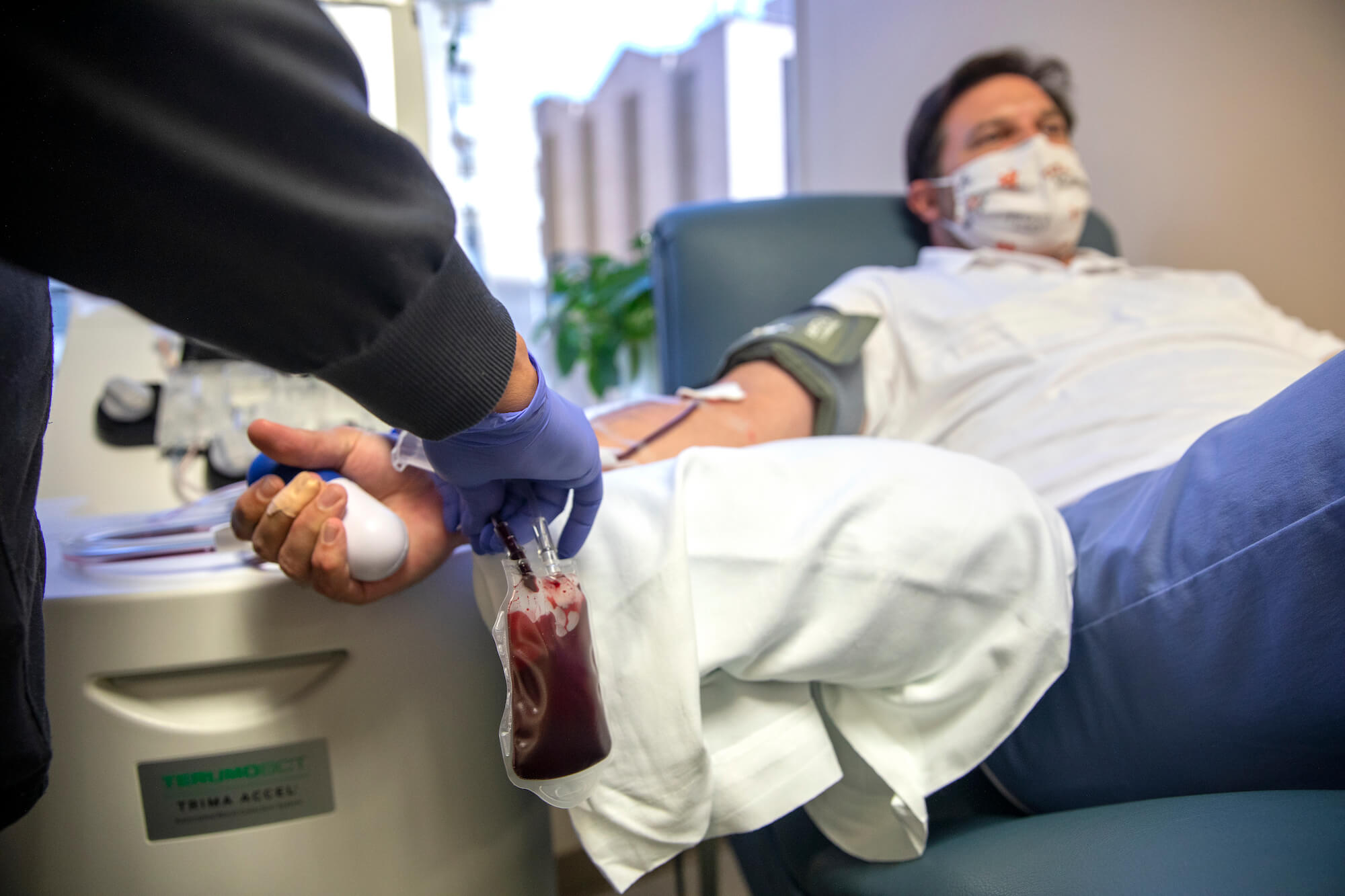 From the moment Daniel Knight felt the first symptoms of COVID-19 to the day he donated lifesaving plasma to help critically ill patients, only four weeks had passed. But to him, the time felt like an eternity.

Houston health officials first reported community spread of COVID-19 during the second week of March. The Houston Livestock Show and Rodeo shut down March 11 and then, on Friday the 13th, schools announced closures.

That weekend, Knight, a 41-year-old attorney, spent the day in his backyard gardening, laying 25 bags of cedar mulch over the flower beds. Although he developed congestion in his lungs and a cough shortly afterward, he chalked up those ailments to the cedar and other outdoor allergens. 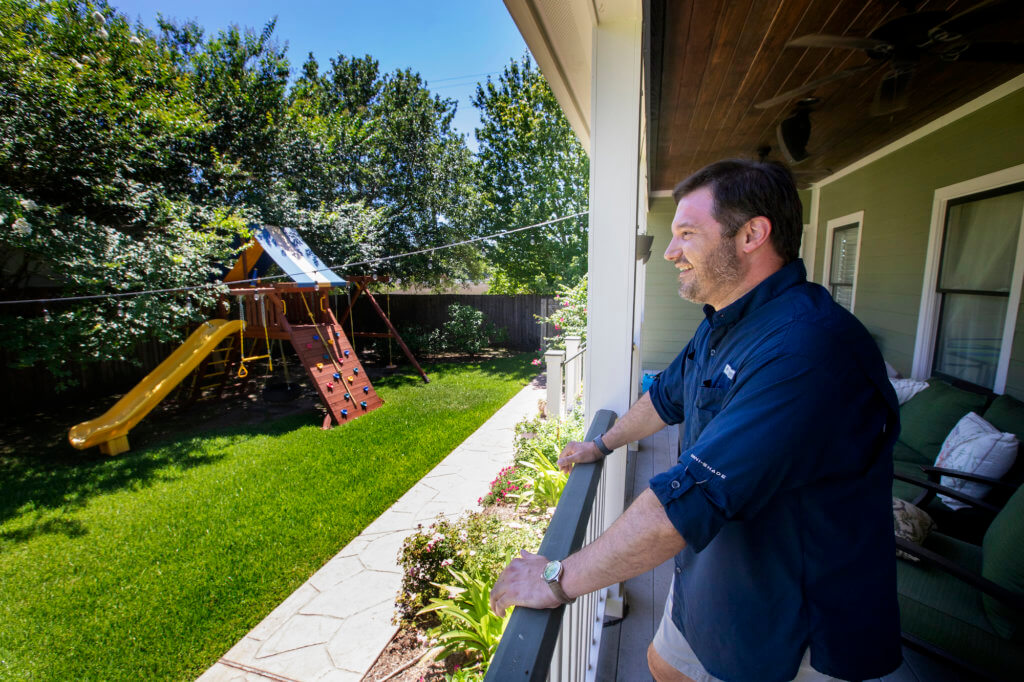 Daniel Knight stands in his home, overlooking his backyard where he would watch his kids play while he recovered from COVID-19.

“It came on so suddenly that we just thought it was a really bad sinus infection or something like that,” his wife, Lyndsey Knight, recalled.

On Monday, March 16, Knight’s law firm, Chamberlain Hrdlicka, sent home all at-risk employees and those with at-risk household members. Knight was among them. He wasn’t going to take any risks exposing family, especially his wife, who has a compromised immune system.

Lyndsey Knight, 40, suffers from rheumatoid arthritis and takes an immunosuppressant drug called tocilizumab. The immunosuppressant induces a condition in which her body is unable to produce the necessary antibodies to fight off infections. As a result, she relies on plasma donations for intravenous immunoglobulin treatments to combat her diminished immune function.

Monday afternoon, Knight came down with a fever.

He immediately called his doctor, who prescribed antibiotics to treat the symptoms, and on Wednesday, March 18, he went in to get tested for COVID-19. By then, Knight’s symptoms had worsened. He was experiencing fatigue, body ache, chills and shortness of breath—all tell-tale signs of COVID-19.

“The physical aspect of it was bad. It was like a really bad case of the flu,” Knight recalled.

His resting heart rate, which normally sits between 65 and 70 beats per minutes (bpm), shot up to 100 bpm, and his coughing spells lasted for a minute or two at a time.

Without the test results to confirm whether it was COVID-19 or the flu, the Knights could only speculate, but he wasn’t taking any chances. Daniel Knight grabbed his clothes and ran to the garage apartment where he could start his first day of isolation.

So close yet so far

His symptoms resolved six days after he was tested, but it wasn’t until March 31—nearly two weeks after his test—that he finally received his results: COVID-19 positive.

“I don’t think I could have changed anything to avoid it,” Daniel Knight said. “I think that’s part of what the frightening reality of this is—that it’s out there and a lot of people are going to get it.”

Studies have shown that individuals who test positive for COVID-19 often carry a high viral load shortly before and after symptoms appear, suggesting that people are more likely to transmit the virus to others while they’re pre-symptomatic and soon after they begin to show signs of sickness. With up to 50 percent of cases being asymptomatic, according National Institute of Allergy and Infectious Diseases director Anthony Fauci, M.D., people may be unwittingly spreading the coronavirus to others.

These silent spreaders are one of the reasons COVID-19 has been so difficult to contain. On top of that, the virus is highly contagious.

The seasonal flu has an R0 value of 1.3, the basic reproduction number that indicates how the contagion level of a virus. By comparison, the SARS-CoV-2 virus has an R0 of 5.7. In other words, one person infected with COVID-19 can transmit the disease to 5.7 other people.

“When you’re told that you’re positive and you’ve actually been transmitting it up to a week before your symptoms—I just felt awful,” Daniel Knight said. “There’s no way I could have known, but I felt terrible because of how many people I exposed. … It’s something you have to be able to work through mentally, otherwise, it could just eat you alive.”

Although he no longer exhibited any symptoms, his second COVID-19 test came back positive on April 3. For nearly a month, he kept his distance from his wife and children by remaining in the garage apartment.

“Even when we’re in quarantine staying at home, most folks are still around a partner, a husband or a wife, or some other civil arrangement,” he said. “You can still hug them on the couch or snuggle while you stream a show. But when you’re in isolation, you have no physical contact with anybody.”

The only times he ventured into the main house was for food, water or clothes. He washed his hands and face each time he entered, and used a Clorox wipe to open doors and clean any surfaces he touched.

While his wife, 10-year-old daughter and 7-year-old son gathered at the dining table for dinner, Daniel Knight ate at the kitchen counter 12 feet away from his family.

Even though he was close by, he felt far away.

“When I was finally out, my son and my daughter grabbed onto me for five minutes,” he said. “Then, 15 minutes later, they’re trying to beat each other up—but for those five minutes, it was a very nice moment.”

With no approved vaccine for COVID-19, the global scientific community is racing for a cure.

Scientists are investigating an array of existing drugs as potential treatments —including remdesivir, hydroxychloroquine and tocilizumab—but another promising avenue is convalescent plasma therapy, a century-old treatment used during the Spanish flu pandemic that began in 1918.

Patients who have fully recovered from COVID-19 carry plasma antibodies that their immune system produced to attack the virus. Transfusing that plasma into patients still suffering from the disease may arm them with the COVID-19-fighting antibodies they need to get better.

On March 28, Houston Methodist received approval from the U.S. Food and Drug Administration to become the first academic medical center in the nation to transfuse donated plasma from a recovered COVID-19 patient into two critically ill patients. Since then, the hospital has recruited 100 plasma donors.

“What makes these donors special is that they have a documented history of COVID-19 infections, so we anticipate, based on the literature that’s been done, that we’re going to have a brisk antibody response in them,” said James Musser M.D., Ph.D., chair of the department of pathology and genomic medicine at Houston Methodist Research Institute.

Daniel Knight, who was familiar with the groundbreaking work Houston Methodist was doing in convalescent plasma therapy, signed up to become a donor immediately after he received a clean bill of health.

His wife, who relies on plasma donations, understands firsthand the importance of her husband’s contribution. She had been encouraging him to donate blood and plasma for years. Now, he finally has overcome his aversion to needles.

“Even though he had the virus, at least something good was coming out of it,” Lyndsey Knight said.

Daniel Knight donated a quart of plasma for the first time on April 14 and again three days later.

“Those of us who [have recovered], we have a unique opportunity to help,” he said. “You have a chance to potentially save a life … [by] letting doctors and scientists try to find an effective treatment for people who are way sicker than I was. If we can do that together, then that’s how we’re going to get back to as close to normal as we were before.”

Since April, Daniel Knight has donated his plasma more than 10 times and plans to continue donating for as long as he has the antibodies in his system and as long as Houston Methodist will take his donations.

“You can turn toward darkness and despair and feel like it’s never going to be the same, or you can look through a lens of hope and say, ‘This stinks. It sucks. It’s awful, but we’re going to overcome it together,’” Knight said. “Me doing the plasma donation is just a small part of that, but I feel as though I have to do what I can.”