Art and Science Come Together on the Dance Floor

Art and Science Come Together on the Dance Floor 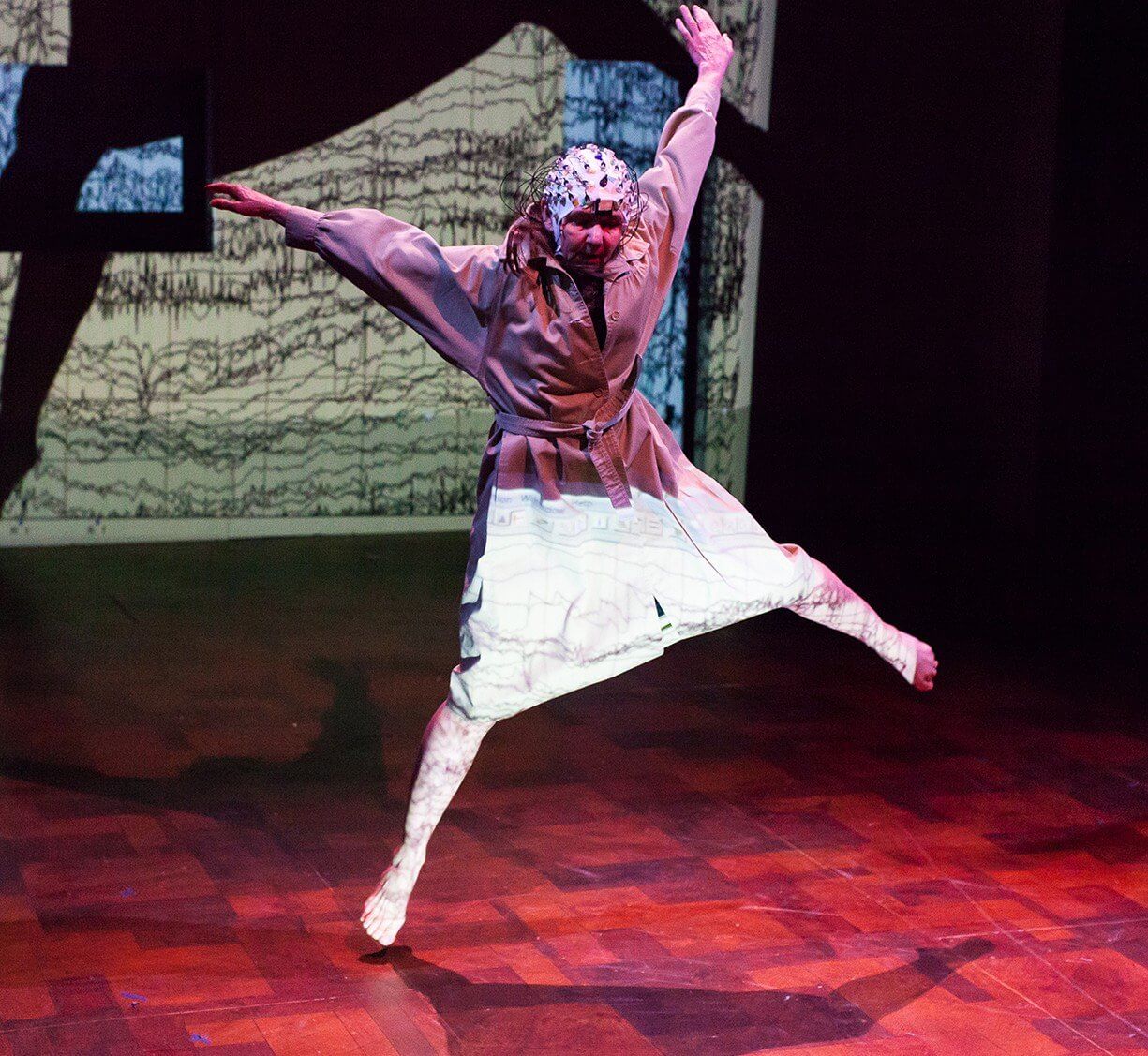 Becky Valls is racing an unseen enemy, trench coat and bare feet adding to the sense of urgency. Music by Ravi Shankar drives an almost unbearable tension as she runs, swoops and dives through a small space on the Jose Quintero Theatre stage, lights flickering in keeping with the shifting brainwaves projected as a backdrop.

University of Houston neuroscientist and engineer Jose Luis Contreras-Vidal, Ph.D., is working with Valls, associate professor of dance, to produce what Contreras-Vidal calls “a brain-computer interface in service of the arts,” part of an ongoing project to study how creativity affects the brain.

Contreras-Vidal will discuss the work at noon Wednesday, Feb. 25, at the Blaffer Art Museum on the UH campus, talking about “Your Brain on Art: Understanding the Brain in Creative Action and Context.”

At noon Friday, Feb. 27, Valls and Contreras-Vidal will lead a demonstration with Valls performing her composition, “Red Square,” wearing a skullcap embedded with electrodes to track her brainwaves and allow her to control the stage lights in the Quintero Theatre, also on the UH campus. Both events are free and open to the public, although reservations are required. Reservations for “Your Brain on Art” can be made here. “Red Square” attendees also can make reservations online.

The talk and dance are part of the Blaffer Art Museum Innovation Series, a slate of public programs developed by the museum in conjunction with the exhibition “Janet Biggs: Echo of the Unknown,” which deals with memory loss and the role of memory in forming identity and is on view through March 21.

Blaffer Deputy Director James Rosengren first began co-organizing cross-disciplinary lectures in 2011 to deepen the museum’s ties with other University departments and the community. This lineup of programs, the first keyed to a Blaffer exhibition, involves more than a dozen UH departments and Houston institutions.

Valls first met Contreras-Vidal when Karen Bradley, head of the dance program at the University of Maryland, came to Houston to work with him on a project several years ago. Valls’ own research involves how movement affects learning in children, making the project a natural fit.

The dance, an emotionally charged eight-minute solo, is one of her signature compositions, and Valls and other dancers have performed it all across the United States. She chose it for the research project, she said, both because of its emotional content and because her intense familiarity with the work will help her interpret the EEG results for Contreras-Vidal and his research team.

Contreras-Vidal, Hugh Roy and Lillie Cranz Cullen Distinguished Professor of electrical and computer engineering, develops algorithms that read electrical activity in the brain, and much of his recent research has centered on using that work to help people with disabilities use bionic hands or to regain movement by “walking” in exoskeletons powered by their own thoughts.

But he said working at the intersection of art, science and engineering can provide important information about non-motor aspects of life.

This work is related to a project he began last year, working with conceptual artist Dario Robleto on an exhibition at the Menil Collection, giving museum visitors the option of wearing a skullcap to record brain activity while they observed Robleto’s artwork. That research will soon be continued with a permanent installation in Blaffer.

The emerging discipline of neuroaesthetics combines neuroscience and the study of art, creative movement and perception. The findings will be different for each person, much like DNA, Contreras-Vidal said.

The results, however, could hold implications for all of society.

“(The goal is) to understand personality, creativity, perception, to understand decision-making and preference,” he said. “We know a lot about what it takes to move a finger or a leg, but we know very little about why it’s so hard to move or communicate when someone is depressed, or why two people may instantly connect and both move their hands at the same time, or mimic each other.”