Texas Health and Human Services Commission findings should be published this fall; could mirror national disparity data reported by CDC 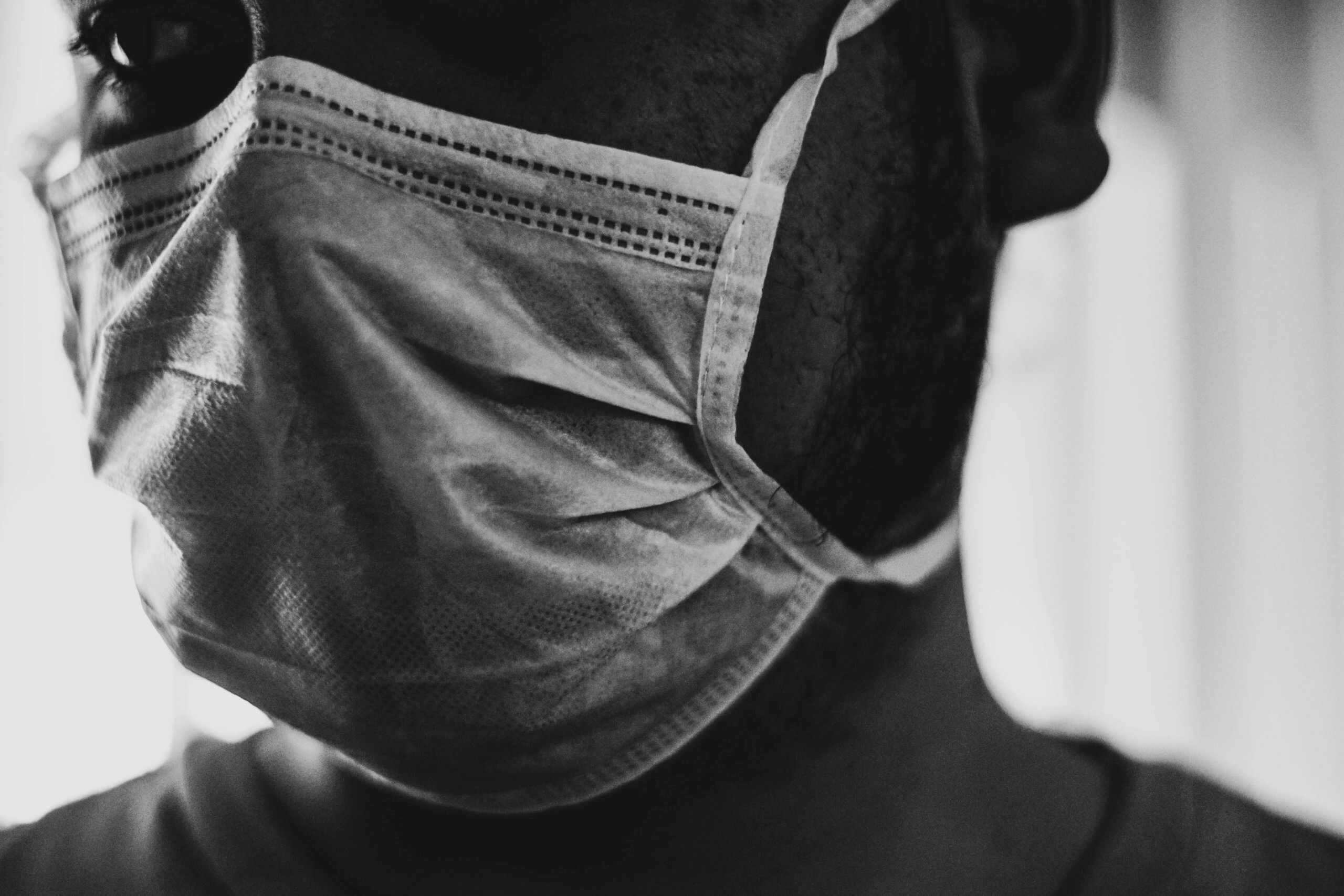 After calls from Black legislators, including several from Houston, about the disproportionate impact of COVID-19 on communities of color in Texas, the state intends to conduct an analysis of pandemic data.

“Our agency is launching a study to understand how and why COVID-19 could have a greater impact on vulnerable populations in Texas as defined by race, ethnicity, age, socioeconomic status, geographic location, chronic illness, presence of a disability, and employment status,” Elliott Sprehe, a spokesman for the Texas Health and Human Services Commission (HHSC), said in an email.

Houston Health Department data shows that Hispanics have been hit hardest by COVID-19 deaths. While 45 percent of the city’s population, according to the U.S. Census Bureau, Hispanics account for 54 percent or 445 of the 823 Houstonians who succumbed to the novel coronavirus as of Sept. 1, 2020. For Black residents, who comprise 23 percent of the city’s population, that group’s 190 confirmed COVID-19 fatalities have been on par at 23 percent. Whites and Asians have experienced a documented death toll below their share of the population. 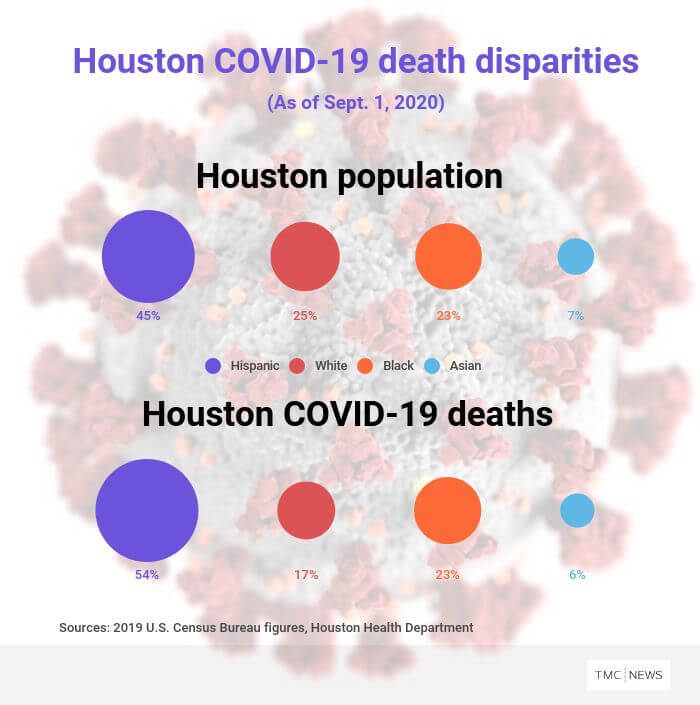 Data from the Centers for Disease Control and Prevention (CDC) reveals national race and ethnicity inequities regarding COVID-19 cases, hospitalizations and deaths for people of color compared to whites.

Cases are more than twice as high for Hispanics, non-Hispanic Blacks and indigenous people across the country. Black deaths are twice as high nationwide.

Hospitalizations hold the most disparity for people of color compared to whites. The rate for Hispanics is 4.6 times higher, 4.7 times higher for non-Hispanic Blacks and an astounding 5.3 times higher for American Indians and Alaska Natives. 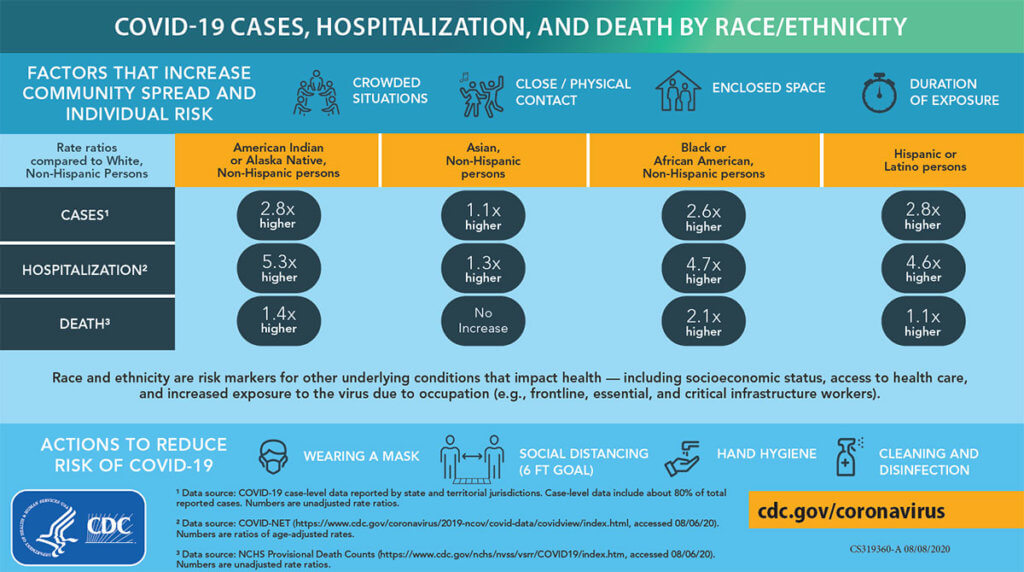 The Texas effort by HHSC includes addressing “lags and gaps” in available data, creating a data repository for the study and producing a preliminary report, expected this fall through the Texas Department of State Health Services (DSHS).

“We will begin by an initial examination of immediately available DSHS health outcome data, Medicaid data, and human service program data (fluctuations in SNAP and TANF applications that may be related to COVID-19, for example) as they relate to each of the factors above,” Sprehe wrote. “Any information we learn through this process that we can immediately apply to protecting Texans, we’ll put to use in whatever way we can, as quickly as we can.”

A new federal rule effective Aug. 1 requires all laboratories that test for COVID-19 to collect information on patients, including race and ethnicity. That data must be submitted to the appropriate local or state health department within 24 hours and those agencies are required to report the information to the CDC.

Texas is chasing a problem that had a solution until two years ago. We might know more about how and why COVID-19 is hitting some Texas populations harder if we had that small-but-mighty office at work during a pandemic.

In 2010, the state opened an agency called the Center for the Elimination of Disproportionality and Disparities that later became the Office of Minority Health Statistics and Engagement. Legislators cut funding and the office closed in August 31, 2018.

State Rep. Garnet Coleman, a Black Democrat who represents parts of south and southeast Houston, serves on the House Public Health Committee and has been working on health disparities for more than two decades. His cousin, well-known political operative Keith Wade, had underlying conditions and was one of Houston’s first high-profile COVID-19 casualties when he died in May.

Several months ago, Coleman contacted Texas Health Commissioner John William Hellerstedt, M.D., about taking a deeper look at why Black Texans, at the time, appeared to have the highest burden of COVID-19 illness and death.

“It can’t be just because you’re Black. There has to be some underlying reason for all of it, but the only way we figure out the underlying reason is appropriate surveillance. And if you don’t have the data, how do you know?” the legislator said, adding that he also called Gov. Greg Abbott’s office.

His voice conveying urgency, Coleman said that he made it clear in his conversation with Hellerstedt that he did not trust the agency’s exploration of the issues.

“You’re not the pig in this chicken-and-pig story,” the longtime legislator said he told the commissioner. “The rest of the people are laying eggs and we’re getting our legs cut off.”

Another African American legislator from Houston, State Rep. Shawn Thierry, who represents some of the city’s southeast and southwest neighborhoods, also reached out to the governor and state health officials about COVID-19’s disproportionate impact on communities of color.

“This action by HHSC is a step in the right direction, but it is only one of many steps which must be taken to comprehensively create health equity in Black and Latinx communities such as my district and across the state,” Thierry said in a statement calling for a more aggressive response. “We are losing more and more lives each day around the country. My office has been in contact with HHSC to discuss the objectives and goals of this study. I am hopeful that key African American medical professionals, legislators, and other stakeholders of influence will have a seat at the table to analyze the results of the study and develop deliverables and plans to equalize and minimize health care disparities. By protecting our most vulnerable populations, we simultaneously and essentially protect all Texans from COVID-19.”