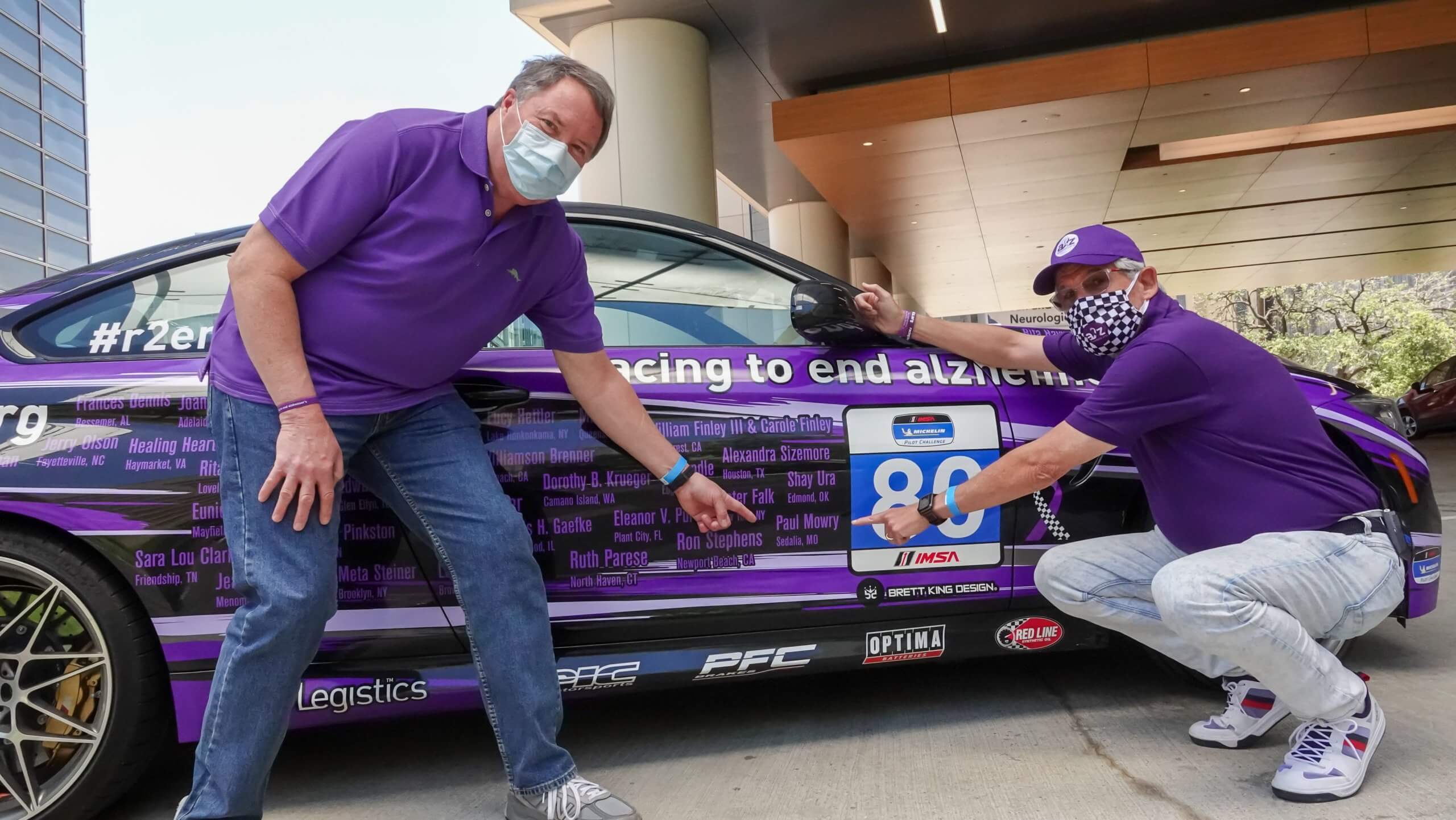 On June 12, a flashy, purple BMW M4 revved its powerful engine and drove up Bertner Avenue, hugging the curve as it turned into the entrance of Houston Methodist’s Walter Tower.

This is no ordinary vehicle. Not only does it appear to be ready for the racetrack, but a closer look reveals a collage of names amid its paint job—all people affected by Alzheimer’s disease. 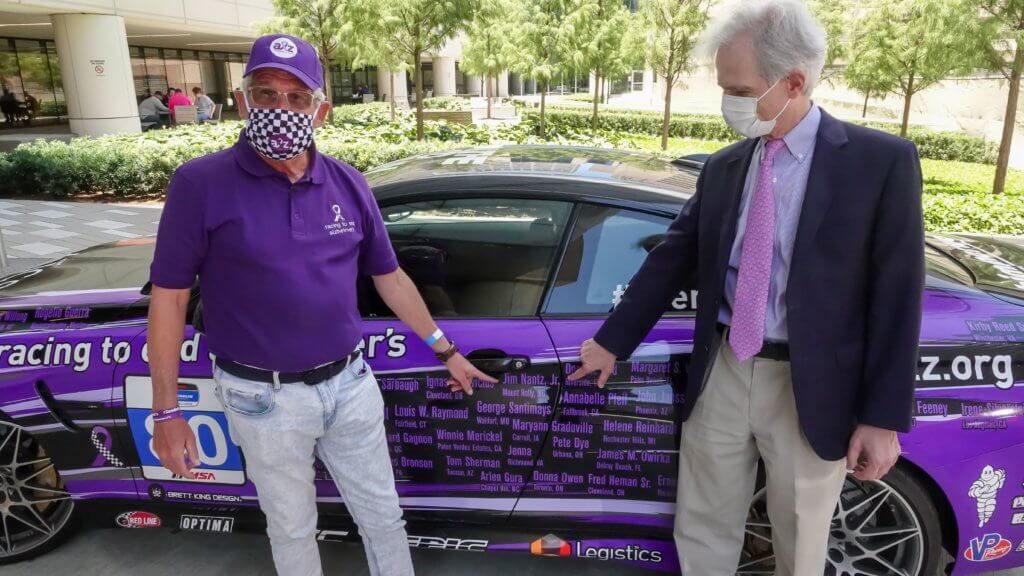 The driver was Phil Frengs, president and CEO of the Southern California-based company Legistics, who is on a mission to fund Alzheimer’s research and care. For Frengs, this is deeply personal. His wife, Mimi, was diagnosed with early onset Alzheimer’s in 2013. While his first priority is to take care of her, he was driven to do more for the 5.8 million Americans living with Alzheimer’s.

“It occurred to me a couple years into Mimi’s illness, ‘What if we figured out a way to put the names of people on the car in exchange for a donation. Wouldn’t that be a different take on this?’” he said. “Fundamentally, in racing, it’s all funded by people who are willing to put their brand and their company name on the car. That’s what pays all the bills. If there’s value to that, there should be value to putting your loved one’s name on the car.”

In 2017, Frengs, who had already been involved in racing as a sponsor of a vehicle in the Continental Tire Sports Car Challenge, created the Racing to End Alzheimer’s Foundation. The foundation’s concept is elegantly simple: For a $250 donation, people can put the name and hometown of a friend or family member—alive or deceased—affected by Alzheimer’s on a race car for the last race of the IMSA Michelin Pilot Challenge Series.

The names are then emblazoned on the sides, roof and hood of the race car “to be a vehicle for us to honor people’s loved one,” Frengs said.

Frengs partnered with popular sportscaster Jim Nantz, who established the Nantz National Alzheimer Center at Houston Methodist in 2011 in honor of his father, who passed away from the disease in 2008.

Funding the care and the cure
During the initial year, 77 names of people with Alzheimer’s replaced the usual sponsoring brands on a Porsche Cayman that raced at the Laguna Seca Raceway in Salinas, California in September. The foundation raised $43,500. With Frengs’ company, Legistics, underwriting all marketing and administrative costs, 100 percent of the donations go directly to two organizations: the Nantz National Alzheimer Center at Houston Methodist and UCLA Alzheimer’s & Dementia Care Program.

For every $250 a donor makes in honor of a loved one, Legistics matches the contribution.

“We’re doing some good things for the families and the people who love somebody because we’re giving them that opportunity,” Frengs said. At the same time, the resulting money is going … toward funding the care and funding the cure.”

Frengs and his foundation were ready for another year of fundraising, but the global COVID-19 pandemic forced racing—much like all sports—to come to a screeching halt.

Thanks to BMW of North America, which loaned Frengs a commercial model of the exact car they use for racing, the racing enthusiast decided to get behind the wheel himself and take the racecar with the 74 names the foundation already collected for a 4,000-mile coast-to-coast road trip.

“The reason we started our drive was because we felt like we were letting down our donors,” Frengs said.

Titled “On the Road Again: The Ultimate Tour for the Cure,” the tour started at the iconic Daytona International Speedway in Daytona Beach, Florida, on June 8 and will end at the Laguna Seca Raceway.

“It’s our own little version of cannonball run,” he said. “We thought it would be fun to bookend the trip going across the country with two of the racetracks that we race at. Laguna Seca has been such an important track to us because of the September races where we’d first introduce the names and Daytona is the world center of racing.”

Coming to Houston
During his pit stop in Houston on June 12, 2020, Frengs visited the Nantz Center where he met Bruce Mowry, owner of the Houston-based company Pulse Staffing, who made a contribution to the Racing to End Alzheimer’s Foundation in honor of his father, Paul Mowry.

“I loved my father,” said Mowry, whose father passed away from Alzheimer’s at the age of 88 in 2002 after battling the disease for 10 years. “It was so bad to watch as the Alzheimer’s started to take a hold of him, watching him lose track of what he was supposed to do and having issues and wanting to wander off. It just was sad to watch that change in him.”

Mowry’s father served in World War II and fought in the invasion of Normandy on D-Day. He continued serving as he retired and got older, mowing his neighbors’ lawns and helping people wherever and whenever he could.

He was, as Mowry recalled, “always there doing what good people do and setting an example,” but as the disease progressed, his father started to slip away.

“It’s hard watching someone that you care so much about go downhill over such a long period of time,” Mowry said. “Alzheimer’s is somewhat forgiving, because the victim doesn’t really know what’s happening at some point. They just kind of live day-to-day or minute-to-minute and don’t really have that sense of what’s happening to them anymore, but it’s so hard on the family and caregiver.”

Mowry, an amateur BMW racer, heard about Racing to End Alzheimer’s through the racing community. Motivated by his desire to help the effort find a cure for the disease and further the care for patients, Mowry wanted give back in loving memory of his father.

“There’s something exciting about knowing that my dad’s name is running around a race track,” he said. “So many people know someone who was affected by it, so they can identify with it. That’s made it just a lot of fun for people. It’s all about maintaining that connection and not forgetting them. It means a lot to me that they’re still with us in some way.”

“[Frengs] is not only raising funds, but he’s raising awareness of this disease and doing it in a very optimistic way,” he said. “That’s something very nice to see—to see that someone is going out and showing that this is something that involves many of us and there is a future with hope for people with this disease.”

Since the foundation’s inception, Frengs has helped Masdeau pursue cutting-edge research at the Nantz Center in an effort to find an effective treatment for the disease. Currently, medications approved by the U.S. Food and Drug Administration (FDA) only treat the symptoms, not the disease.

“[The disease] continues to worsen, but the only thing the medications do is change the symptoms,” Masdeau said. “They don’t change the underlying pathological process.”

The field of Alzheimer’s research has been historically riddled with disappointment and desperately needs a win. Despite a spate of failed clinical trials, more advanced imaging technology developed over the past few years—such as positron emission tomography (PET) imaging of amyloids, tau and inflammation—is one of the main exciting sea changes in Alzheimer’s research. Highly detailed imaging allows scientists to look inside the brain and understand exactly what is going on in a specific patient “so that we are beginning to tailor the treatment to what is going on in the person’s brain rather than generally,” Masdeau said.

“We’re finding out that Alzheimer’s is very heterogeneous,” he further explained. “It behaves very differently in people. It is likely that it is different in different individuals and that’s why they respond differently. That’s probably why many of the clinical trials that have been performed in the past have been negative because we’re mixing apples and oranges and bananas.”

But there is a price for progress. Federal grants from agencies, such as the National Institutes of Health (NIH), don’t cover everything—making philanthropic initiatives, such as Frengs’ foundation, “absolutely critical for innovative research,” Masdeau said.

“Grants from agencies, like the NIH, tend to avoid interventions or approaches that are very novel [because they’re] risky in the sense because they’re new and we don’t have enough data to support them,” Masdeau explained. “You cannot move along the lines of very novel approaches with NIH funding.”

“It’s going to add up over time and it’s going to make a difference in each of these organizations,” Frengs said. “As a businessman and entrepreneur, I’m part of the group of people who thinks that we can always fix something. Just give me a problem and I’ll fix it. The truth of the matter is, when it comes to Alzheimer’s, there isn’t much you can do. For me, this foundation—this effort to raise awareness around Alzheimer’s and dementia—is something I can do.”