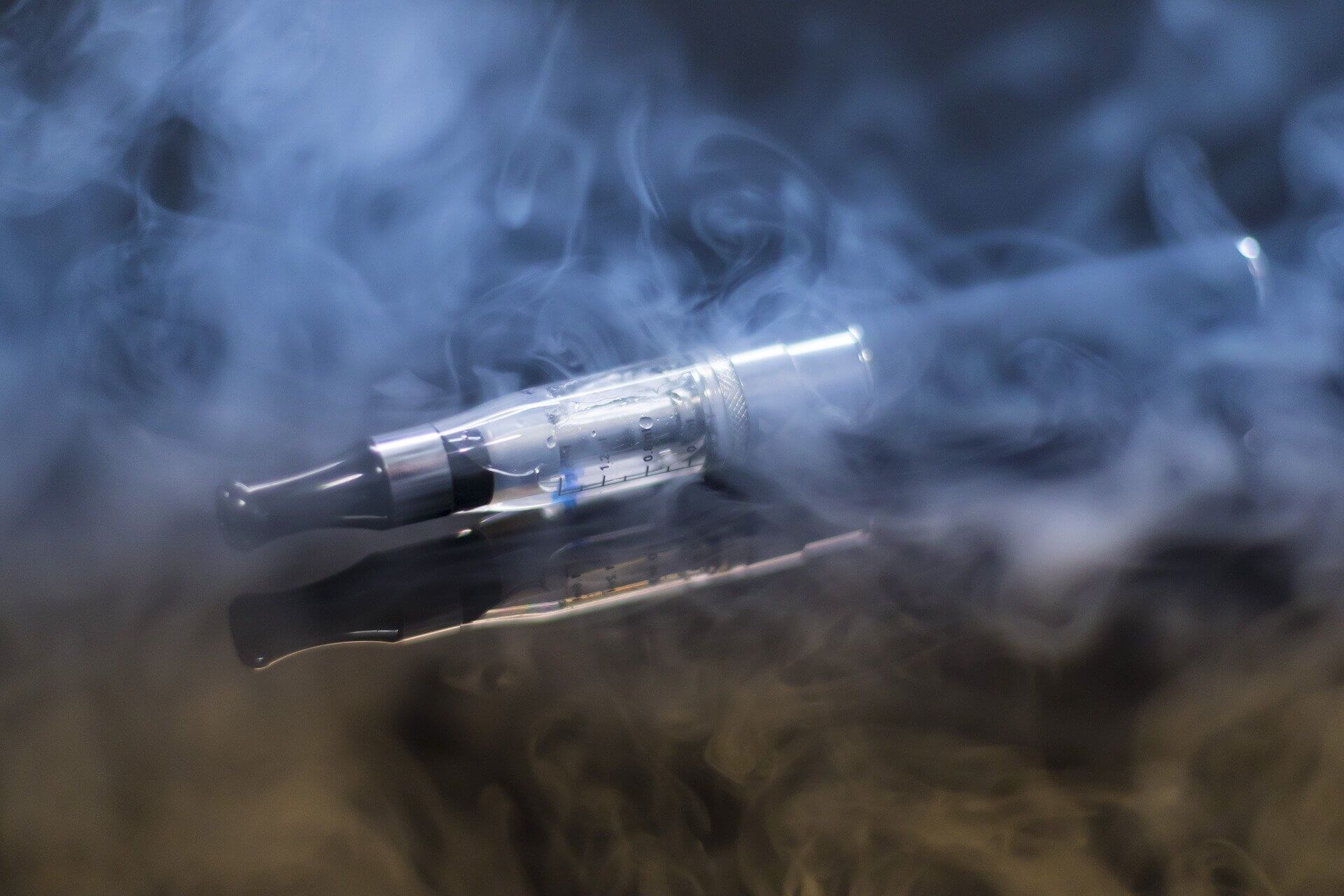 On Nov. 15, 2018, the U.S. Food and Drug Administration announced new steps to restrict the sale of most flavored e-cigarettes in an effort to curb the escalating use of tobacco among young people.

While the FDA initially discussed plans to ban most flavored e-cigarettes sales in retail stores and gas stations across the country, the agency ultimately decided to issue new rules that limit sales to age-restricted locations and require more robust age-verification processes for online purchases.

“Today’s actions by the FDA represent a significant step toward protecting the health of our future generations,” Peter Pisters, M.D., president of The University of Texas MD Anderson Cancer Center, said in a news release. “These flavored products often are appealing to children and adolescents, and we support measures to prevent young people from developing a lifetime of addiction to nicotine, which can lead to a variety of health problems and potentially future tobacco use.”

The FDA established its Comprehensive Plan for Tobacco and Nicotine Regulation in July 2017 to address the increasing popularity of e-cigarettes and to help adult smokers overcome tobacco addiction. Since the plan’s inception, the FDA has launched a series of initiatives around regulatory policies, science-based reviews of tobacco products and tobacco prevention among youth.

“I made clear my concerns about kids’ use of e-cigarettes, especially those products marketed with obviously kid-appealing flavors,” FDA Commissioner Scott Gottlieb said in a statement. “At the time, however, the trends in youth use appeared to be changing in the right direction—reported e-cigarette use among high school students, which peaked at 16 percent in 2015, had decreased to 11.3 percent in 2016 and held steady in 2017. What I did not predict was that, in 2018, youth use of e-cigarettes and other ENDS products would become an epidemic.”

Public health experts applauded the agency’s latest action and are encouraged that it is a step in the right direction, but more work must be done to curtail the rising epidemic of e-cigarette use—a sentiment Gottlieb echoed in his statement.

“These increases must stop. And the bottom line is this: I will not allow a generation of children to become addicted to nicotine through e-cigarettes,” he wrote. “We won’t let this pool of kids, a pool of future potential smokers, of future disease and death, to continue to build. We’ll take whatever action is necessary to stop these trends from continuing.”

The increasing popularity of electronic cigarettes has left health experts scrambling to educate a new generation of young smokers about the dangers of tobacco and nicotine-related products.

“What we found over the past few years is that we’re doing a really great job on educating on the harm of tobacco combustible cigarette products,” said Jennifer Cofer, MPH, director of the EndTobacco program at The University of Texas MD Anderson Cancer Center. “But the other tobacco product trends for colleges include hookah and e-cigarettes, which now have 2,000 plus variations, including the new Juul. … It’s frustrating. It’s a new frontier for us as public health and tobacco control advocates.” 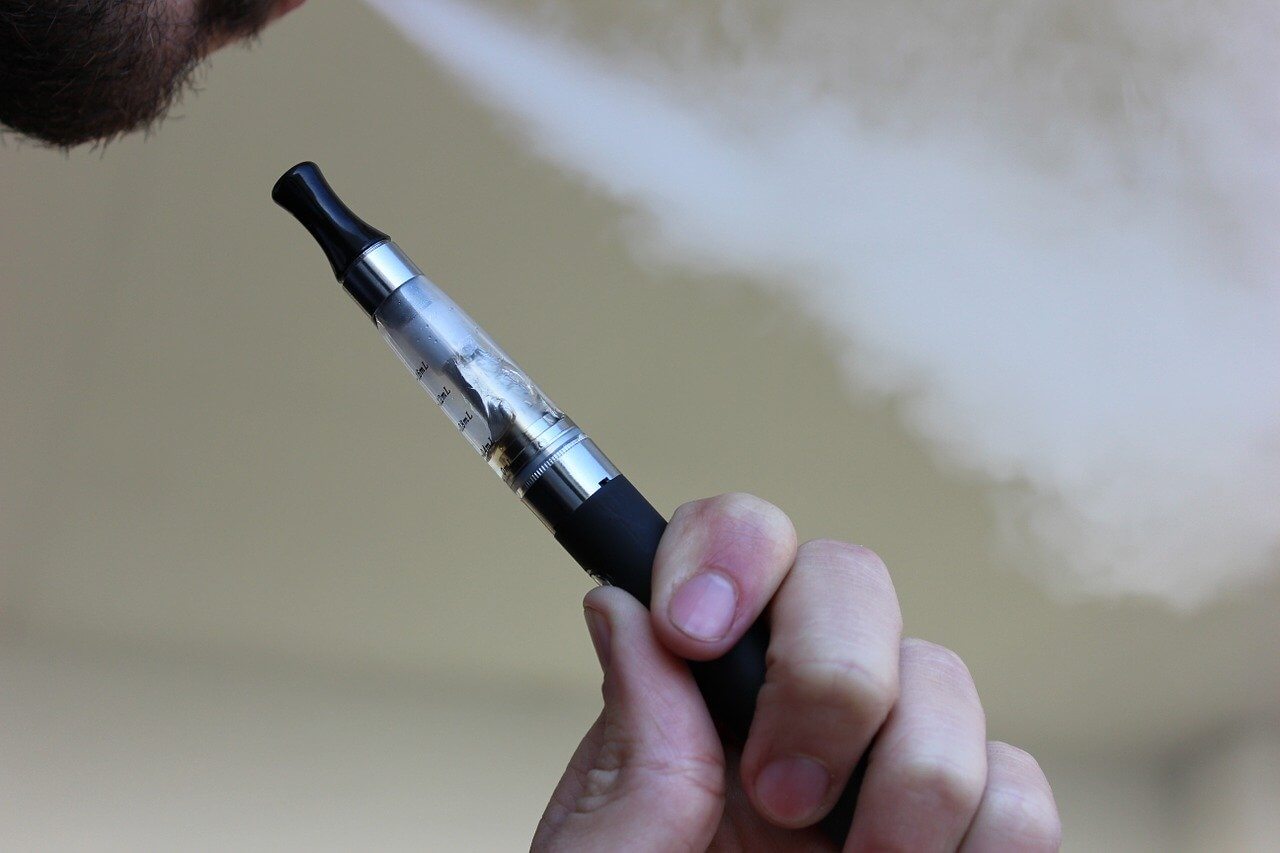 Cofer was among the speakers at The University of Texas System’s two-day Eliminate Tobacco Use Summit at MD Anderson, where health and policy experts convened to discuss policy, prevention and cessation efforts for tobacco and nicotine-related products, especially e-cigarettes, on UT and non-UT campuses.

An e-cigarette is any one of a wide range of products on the market that “simulates smoking by using a mechanical heating element, battery, or electronic circuit to deliver nicotine or other substances to the individual inhaling from the device,” according to Section 3.1207 of the Texas Health and Safety Code.

A basic e-cigarette has three main components: a battery, atomizer and refillable cartridge. Unlike traditional combustible cigarettes that burn tobacco, e-cigarettes use a battery-powered coil to boil liquid combinations (also known as “e-juices”) of nicotine, glycerol and propylene glycol, benzoic acid and flavorants, which then convert into vapor for users to inhale.

Juuling
Leading the pack in e-cigarette sales is Juul, a device manufactured by San-Francisco-based Juul Labs. The company was founded by two Stanford University product design graduates who successfully created an e-cigarette that encapsulates the tech-savviness of Silicon Valley and youth’s insatiable appetite for cool, trendy gadgets. 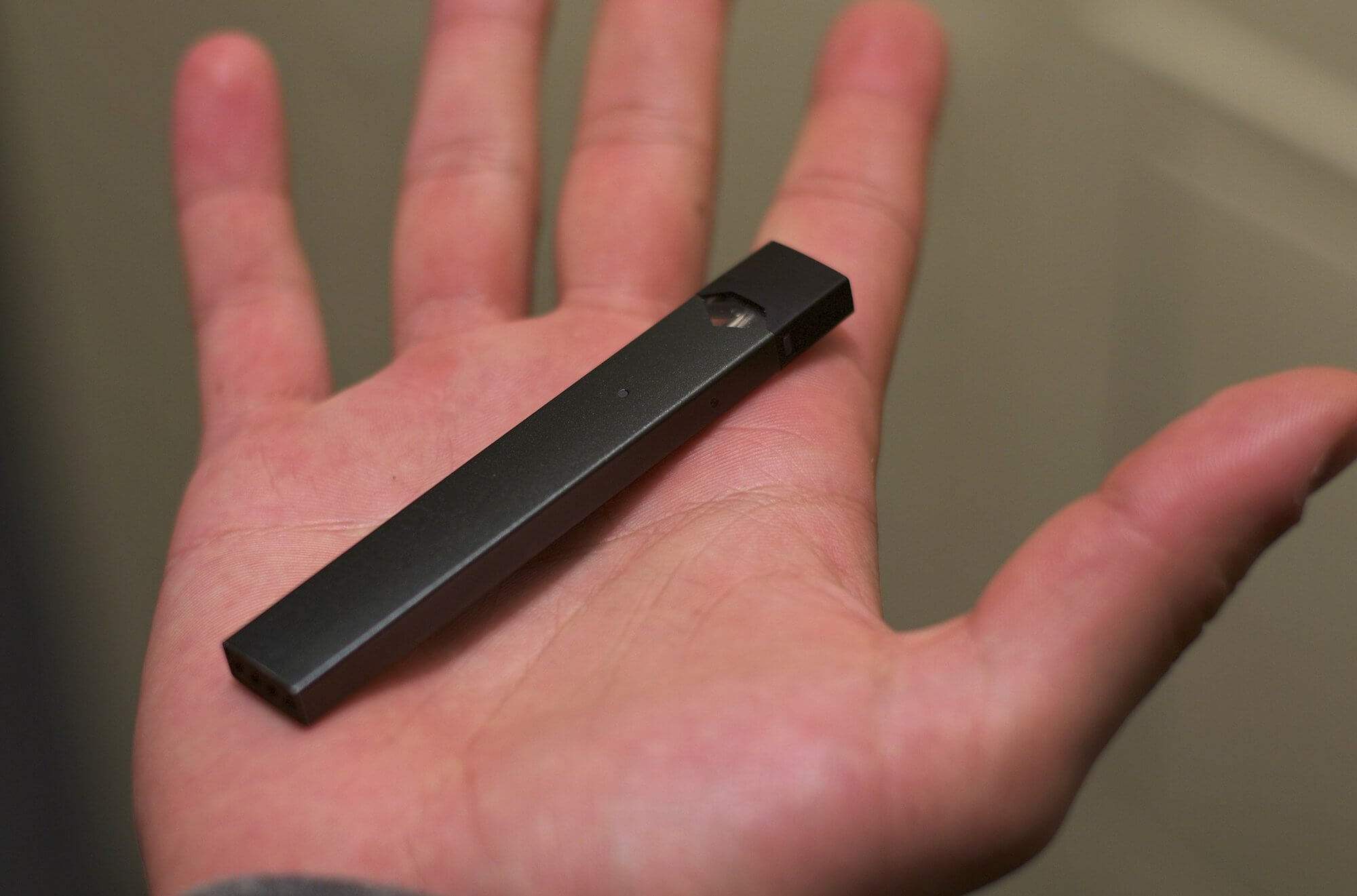 The Juul fits in the palm of your hand. (Photo credit: Mylesclark96, from Wikimedia Commons)

Since the product’s launch in 2015, Juul sales have seen an astronomic rise, particularly among teens and young adults. The company has even spawned its own verb: “Juuling.” According to Nielsen data collected by Wells Fargo, Juul sales skyrocketed more than 700 percent over the past year and currently dominate more than 50 percent of the market share.

Juul’s two main draws? First, the e-cigarette is slim, discreet and cleverly disguised as a USB flash drive—perfect for teens who want to hide vaping from parents and school administrators. Second, Juul offers a wide variety of attractive flavors, including cool mint, crème brulee, fruit medley, mango and cool cucumber. Other companies have expanded on Juul’s popularity and manufacture Juul-compatible pods in additional flavors, including blueberry, watermelon, and “caffe latte.”

After decades of dogged efforts by public health advocates and community leaders, smoking traditional cigarettes in public areas is now socially frowned upon. However, thanks to the understated design of Juul and other e-cigarette brands, smoking in public—whether stealth smoking or not—is making a comeback.

“The tobacco industry’s creativity is just amazing,” said Alexander Prokhorov, M.D., Ph.D., director of the Tobacco Outreach Education Program at MD Anderson and creator of the web-based youth prevention and cessation program ASPIRE. “They don’t bank on regular cigarettes anymore because it’s socially not as acceptable as it used to be, so that’s why they try to diversify the market and create disagreement and consensus among the scientific community. … They’re re-normalizing smoking behavior in places where people would not, in this day and age, imagine other people smoking or using anything that looks like smoking.

200 puffs
The unassuming design and whimsical flavors of Juul products have a dark side. Each pod contains 0.7 mL e-liquid with 5 percent nicotine by weight, equivalent to the same amount of nicotine as a single pack of cigarettes or 200 puffs.

“[Juul] is really effective and fast. It has to be much faster because there are already so many products out there in magnitude,” Cofer said.

Combustible cigarettes contain a slew of toxins, carcinogens and irritants. In addition, smoking these forms of cigarettes increases the amount of carbon monoxide—a toxic colorless, odorless and tasteless gas produced when incomplete burning of a carbon-containing fuel occurs—in the bloodstream and can starve the body of oxygen, which can lead to death.

According to a national study published in the Journal of the American Medical Association, more than 80 percent of e-cigarette users between age 12 and 17 used a flavored e-cigarette the first time they started using the product and said they used e-cigarettes “because they come in flavors I like.”

Earlier this year, the National Academies of Sciences, Engineering, and Medicine released a new report on e-cigarettes that compiled data from more than 800 peer-reviewed studies. The report concluded that e-cigarettes are safer than traditional combustible cigarettes.

Because of this, proponents of e-cigarettes claim that e-cigarettes offer seasoned combustible cigarette smokers a less harmful alternative and could help them quit.

But “less harmful” should not be mistaken for “safe.”

“E-cigarettes have less toxins and carcinogens, the cancer-causing poisons,” Cofer said, “but it does not mean they’re harmless.”

Because e-cigarettes are relatively new, there is little information on their long-term health effects. Experts are growing increasingly concerned about nicotine addiction and the potentially toxic substances found in e-cigarettes.

With the paucity of research on e-cigarette use, Prokhorov urges young adults not to risk damaging their health by experimenting with e-cigarettes, which have been shown to act as a gateway to traditional cigarette use.

“Even if we deal with kids who are not switching and stick to e-cigarettes, we don’t know what’s going to happen after a lifetime use of these products,” Prokhorov said. “That’s why we should be aware of that and try to convince kids not to even try these cigarettes. Once someone gets addicted to nicotine, we know how difficult it is for a lot of smokers and vapers to quit.”

More work to be done
In April, FDA Commissioner Scott Gottlieb announced that the agency uncovered a litany of violations in e-cigarette sales to underage teenagers and requested that Juul Labs submit company materials, including marketing documents and research targeting different age groups. In response, Juul Labs said it will support raising the tobacco-buying age to 21 and will invest $30 million over the next three years to fund independent research, education and community outreach initiatives.

It’s a start, but experts and advocates say more work needs to be done.

“The administration’s not taking action fast enough. It’s not to blame them and say they’re not doing it, but Juul slipped out into the market so quickly that now the FDA has to catch up,” Cofer said. “They’re going to act, but it has to be more urgent, and it has to be more efficient and effective to keep the kids from the harmful effects of youth initiation.”