Two runners have one heart in common

Two runners have one heart in common 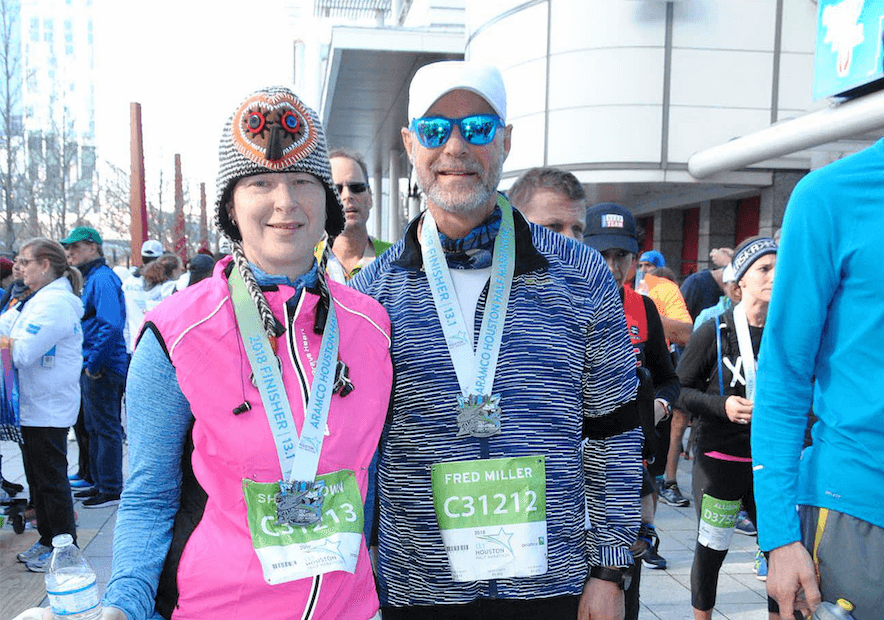 The Chevron Houston Marathon attracts athletes from all over the world who are connected by a love of running.

This year’s marathon, on January 14, included two runners connected by one heart. Shae Brown of Shiner, Texas, and Fred Miller of Glencoe, Ill., ran the half marathon together.

Their common bond? A transplanted heart donated through LifeGift to Brown in May 2013 by Miller’s daughter, Alyssa, who died at 24 after a long illness.

Brown and Miller ran together for the first time in October 2017 at the Chicago Marathon. This time they met in Houston, where Brown had her heart transplant. Cardiologist Reynolds Delgado III, M.D., medical director of mechanical assist devices in heart failure for the Texas Heart Institute and Baylor St. Luke’s Medical Center, performed the surgery at Baylor St. Luke’s.

Despite receiving Alyssa’s heart in 2013, Brown and her husband, Joe, didn’t meet the Millers—Fred, his wife Barbara and Alyssa’s twin, Eva—until 2016.

Transplant recipients are encouraged to write a letter to the donor family a year after surgery, but Brown thought doing so would bring up bad memories for the Millers. Instead, she decided to take her time and find the right words to express what she was feeling.

“I didn’t know what to say, so it was really two years before they heard from me,” Brown said.

Eva responded right away, convincing her parents to meet the Brown family.

“We were still going through the motions of grief from losing Alyssa, so her letter was very touching,” said Fred Miller, who had been a marathon runner since 1999, but was sidelined by a knee surgery and Alyssa’s illness and death. In fact, while Brown was itching to complete a marathon as one of her post-surgery goals, Miller, wanting to be supportive, found himself hoping she would change her mind.

“I hadn’t run for three years. However, I took it back up,” he said to Brown, “so thank you for that.”

For Miller, running with Brown is like sharing a moment with Alyssa.

“Alyssa was a determined person, and it was her decision to donate her organs and her desire to help someone go on and live a normal life,” he said. “This is now Shae’s heart, and if she wants to run a marathon, my job is to nag and push her to do the best she can.”

Both finished the half marathon together Sunday—in two hours and 42 minutes.