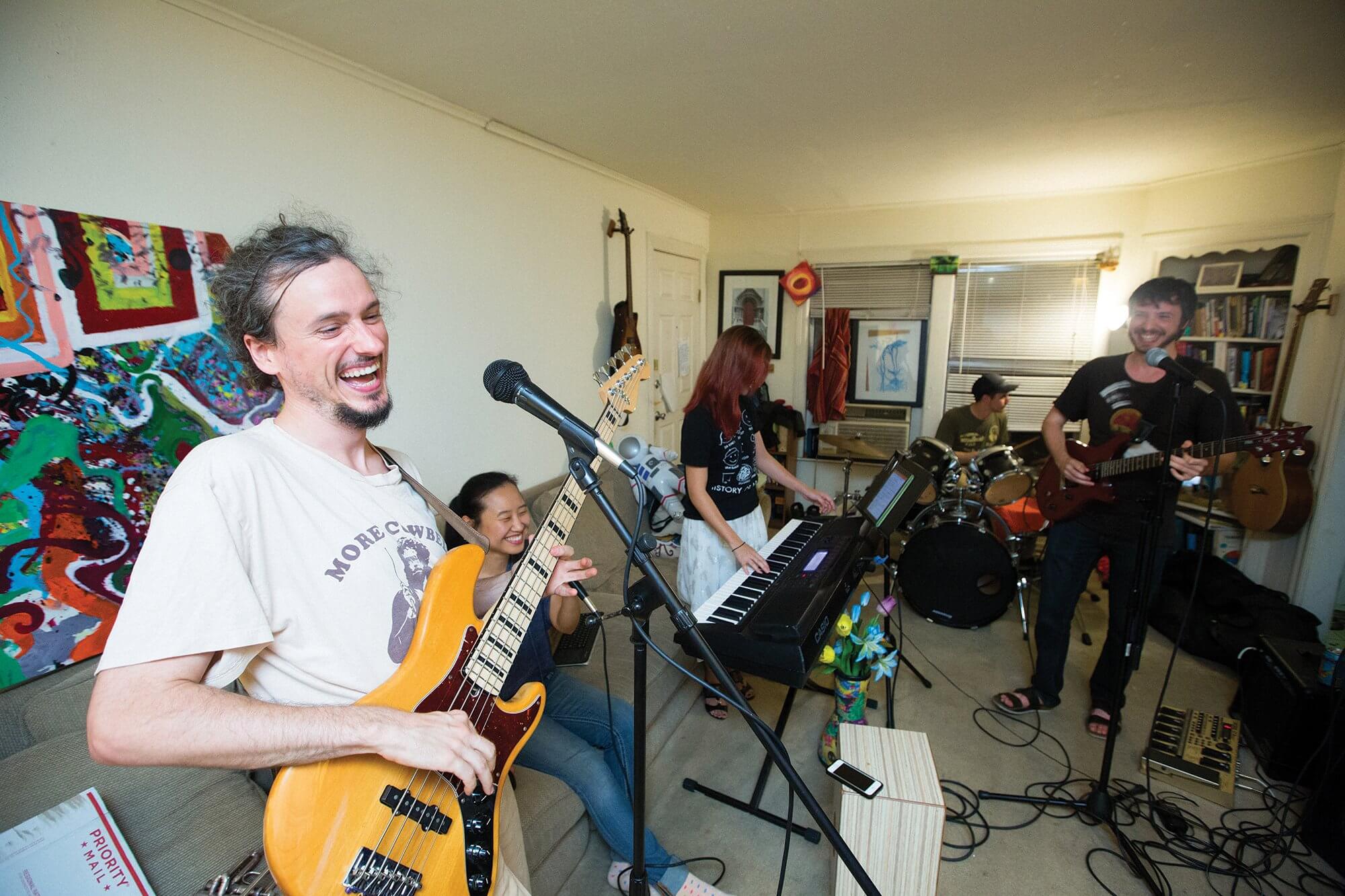 Tulip finger is a skin disease that affects people who handle tulip bulbs. But Tulipfinger—one word, not two—is a live karaoke band based in Houston.

When Ryan Ash, George Denfield and Jiyoung Park aren’t working in their respective labs at Baylor College of Medicine, the three neuroscientists can be found jamming out in Ash’s Rice Village apartment.

“I think everybody needs to express a little bit of themselves in some form,” said Park, a graduate student in structural and computational biology and molecular biophysics who sings backup vocals for Tulipfinger. “What we had in common was that we were really curious about neurons and brains.”

The band formed in 2011 after Ash, Denfield and Park met as graduate students in Baylor’s neuroscience department and discovered their shared love of music. Playing together helped relieve the stress of graduate school and kept them from getting burned out.

Originally, the band was named Spike!Spike!Spike! as an homage to neuroscience. The brain contains close to 100 billion neurons that constantly fire signals to communicate with each other; every firing signal is known as a spike.

“We were able to make fun songs out of neuroscience,” Park said. “I’m not sure how many people we got to really spread that fun to, but I think the neuroscience department enjoyed it.”

As Spike!Spike!Spike!, the band often played at Baylor’s annual neuroscience conference, performing classic songs with a neuroscience twist. For example, the band’s rendition of the 1966 Beach Boys classic “Wouldn’t it Be Nice,” was titled “Would it Make You Spike.”

“Writing and playing music are both very creative enterprises,” said Denfield, a neuroscience M.D./Ph.D. student who plays guitar and sings. “Certainly, writing music is creative, but science is very creative, too. Idea generation is important in both of those.”

The band is like “Weird Al” Yankovic with a neuroscience flair, “but even nerdier,” said Ash, a neuroscience postdoctoral researcher who plays bass and trumpet.

Eventually, the band changed its name to Tulipfinger in 2013 when members decided to focus less on neuroscience-themed songs and more on karaoke. Ash’s father, a fellow musician who works in advertising, suggested they combine two random words for a unique-sounding name. They came up with Tulipfinger without knowing that “tulip finger” is a type of dermatitis. (That discovery came years later.)

These days, Tulipfinger is an “activist karaoke band” with two additional members: Maho Sasaki, a neurological music therapist at Sam Houston University, on keyboard; and Dillon Baete, a Baylor
neuroscientist-turned-beer-scientist at Karbach Brewery, on drums.

Tulipfinger has close to 100 songs in its set list. When the band plays at a bar, people sign up to sing lead vocals, while the band plays the instrumental music and provides backup vocals.]

All of Tulipfinger’s songs have been selected in response to political upheaval.

“Recently, there’s been some interesting changes in the political climate and the social climate,” Ash said. “I grew up listening to the Beatles and stuff, so we got more into protest songs … and encourage more people to sing those.”

Earlier this year, Tulipfinger performed at the March for Science in downtown Houston. The band’s song, “M-M-M-March for Science!” was sung to the tune of the Knack’s 1979 debut single, “My Sharona.”

Tags | music, on the side, tulipfinger
Advertisement