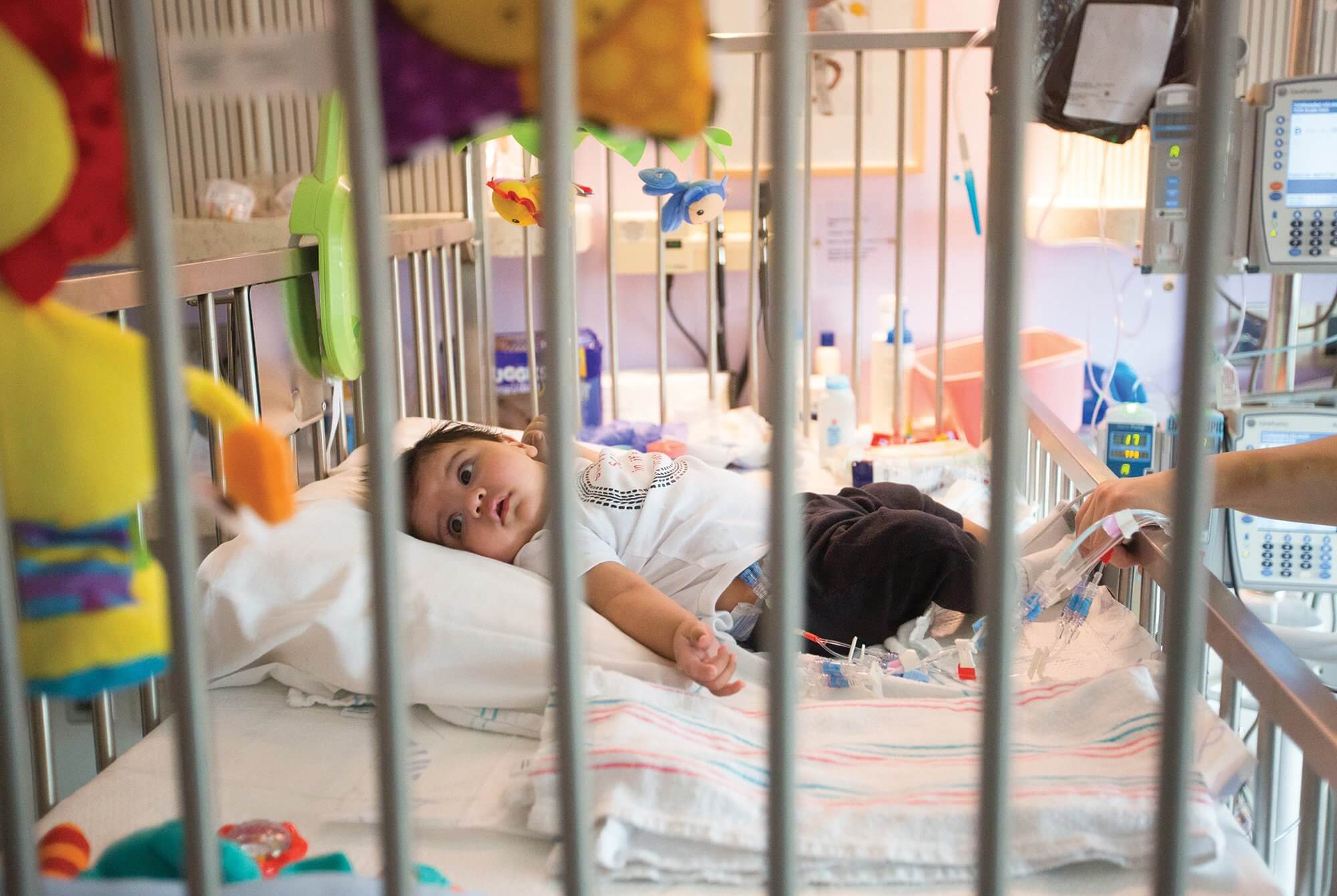 Blanca Romero gave birth to her son, Sebastian, on Feb. 12, 2017, at Houston Methodist Hospital in Katy. At 8 lbs. 9 oz., Sebastian had plump cheeks, big brown eyes and a head full of thick black hair. He was, by all appearances, a perfectly healthy baby boy.

Sebastian was Romero’s third child, so she was familiar with the post-delivery drill. She took him to his newborn screening with the pediatrician, but something wasn’t quite right with one of his tests. The results showed abnormalities in Sebastian’s immune system.

“It was scary to hear your child has something, but you don’t know what it is,” Romero said.

Romero and her husband, Emil, met with Sarah Nicholas, M.D., an allergy and immunology specialist at Texas Children’s Hospital, who explained that their son had a rare genetic disorder called severe combined immunodeficiency (SCID). The condition is more commonly known as “bubble boy disease,” named for David Vetter, who suffered from the same illness and was forced to live his short life in a sterile plastic bubble. Born in 1971, Vetter was also treated at Texas Children’s.

Without the body’s natural defense system, Sebastian and other babies with SCID are at high risk for severe and recurrent infections, such as pneumonia.

But there was hope. With chemotherapy and a bone marrow transplant, Sebastian had a good chance of living in the real world.

Living in a bubble

Although Sebastian didn’t need to live in a plastic chamber like Vetter, the environment he required at home created a bubble of social isolation for Romero and her family.

Soon after his diagnosis, Romero’s husband and the couple’s other two children, Abraham, 7, and Kayla, 5, caught colds. 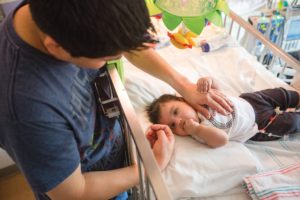 Emil Romero comforts his son in the hospital.

Romero’s instincts kicked in. She began formulating a way to keep Sebastian safe from pathogens and people, including his own family. First, she and her husband disinfected their entire home, buying four air filters to remove dust, pollen, mold and bacteria from the air.

Then, they transformed the master bedroom into living quarters for her and Sebastian. Romero spent her days alone with the baby, venturing outside the room only for brief moments.

“My husband would bring food into the bedroom whenever the kids would leave for school and he would leave for work,” Romero said. “He would Lysol the entire house so that I could go … in the living room or the kitchen to get something to eat, and then I’d go right back into the room.”

Romero notified her children’s school of Sebastian’s condition. The classrooms where Abraham and Kayla spent most of their time were sanitized daily. The school also let Romero know when any students were sent home with fevers, so that she could decide whether or not her children should go to school.

Rather than eating lunch in the cafeteria with the rest of his class, Abraham stayed in the classroom with his teacher and one friend.

When the kids returned home from school, they were required to shower immediately to make sure they didn’t carry any outside pollutants or germs into the house.

Even then, the master bedroom was off limits. Although Abraham and Kayla were eager to hold and play with their baby brother, they had to stand far from the door. Romero would hold Sebastian up in the air “like in Lion King when they’re showing Simba,” she said, so they could see him.

The kids were isolated from their mother, as well.

“I couldn’t hug my kids,” Romero said. “I couldn’t kiss them because I have to protect Sebastian as his main caregiver.”

Instead, she would give her two oldest children “pretend hugs.” She would hug herself and they would hug themselves at the same time, as if they were hugging each other.

“I feel guilty,” Romero said. “Everybody tells me not to because Sebastian is the one who needs us the most right now, but I can’t help, as a mother, to feel like I’m failing my other two children because they also need me.”

Looking for a match

On May 14, Mother’s Day, Blanca and Emil Romero packed their suitcases and drove Sebastian from their home in Katy to Texas Children’s. They settled into a small room with a metal crib for Sebastian and a sofa that converted into a pull-out mattress. For the next month, this would be their second home.

Currently, the only curative option for patients with SCID is a one-two punch of chemotherapy and a bone marrow transplant using stem cells.

With this treatment, the survival rate at Texas Children’s has been shown to be more than 90 percent for patients with SCID if treated within 3 months of age. Left untreated, however, SCID is almost always fatal from infection within a year of age.

“Any time you see your patient go through a difficult procedure … you really worry about the risks you’re subjecting them to, but SCID is really universally fatal … without intervention,” Nicholas said. “I feel good recommending it to my patients because I know it’s a lifesaving therapy.”

“Since the lymphocytes arise from stem cells that are located in the bone marrow, the only curative option for SCID patients is basically to replace that ‘sick marrow’ producing abnormal lymphocytes with a normal marrow producing functional lymphocytes,” Martinez said.

Patients without a matched sibling require either a transplant from an unrelated marrow donor or a cord blood unit—stem-cell-rich blood left in the umbilical cord and placenta after birth that was donated to a public cord blood bank.

But none of these options worked for Sebastian, who is Hispanic. Minorities—including Hispanics, African Americans and Asians—are underrepresented in the bone marrow transplant registry, making it difficult for babies of those ethnic backgrounds to find a good donor match.

Martinez said it was the first time in her last 10 years of transplanting SCID babies that she and her team weren’t able to find a matched sibling or cord blood unit for transplant.

Without many options left, Martinez decided on a haploidentical transplant. A haploidentical, or half-match, donor can be a patient’s mother, father or sibling, as long as they haven’t been exposed to certain viruses, including cytomegalovirus (CMV), a common virus that affects 85 percent of adults. Once a person is exposed to CMV, the virus remains dormant inside the body and can be reactivated.

Fortunately, Romero tested negative for those viruses, making her an ideal haploidentical donor for Sebastian.

Martinez administered a drug called granulocyte colony-stimulating factor to stimulate the production of Romero’s stem cells and mobilize them out of the bone marrow to the peripheral blood for extraction. After measuring the amount of cells her body was producing, Martinez and her team discovered that Romero had four to five times the amount of stem cells Sebastian needed for his transplant. Romero called them her “super cells.”

The extracted stem cells were then sent to a lab for graft engineering and T cell depletion, a purification process that separates unmatched T cells to prevent graft-versus-host disease (GVHD).

Finally, on the evening of Thursday, May 25, Martinez and her team walked into Sebastian’s hospital room carrying a small blood bag full of purified stem cells. They hooked up the bag to the IV pole next to Sebastian’s bed and began administering 78 milliliters of the “super cells.”

Romero watched as the pink liquid snaked through the tube into Sebastian’s central line. An hour and 10 minutes later, his body received the final drops of lifesaving stem cells.

But Sebastian wasn’t out of the woods yet. He was still experiencing side effects from chemotherapy. 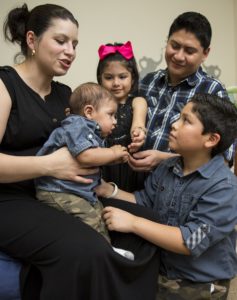 Blanca and Emil Romero at home with Sebastian, Kayla and Abraham.

In preparation for the bone marrow transplant, Sebastian underwent 10 days of chemotherapy to suppress any remaining immune system that could reject the donor cells and to clear space in the bone marrow for the new stem cells to grow and expand. Although this is a necessary part of the treatment, it takes a painful toll on the body.

“During the chemo days, he looked fine, but now to see the after effects, I can’t do anything and nothing soothes him,” Romero said. “I try to hold him and it’s horrible. I can’t do anything. It sucks. I wish I could just know what he’s feeling.”

Monday, May 29, was one of their hardest days yet. Emil Romero sat in the pull-out bed, gently holding Sebastian in his arms, while the slack of catheter tubes attached to Sebastian’s body trailed around them. Sitting next to her husband, Blanca Romero gazed forlornly at her 3-month-old baby boy and listened to his subdued whimpering.

“He has learned that, if he cries, it hurts him more, so he whimpers more than he cries,” she said. “He doesn’t babble as much either because it hurts him.”

As she caressed Sebastian’s head, strands of his hair stuck to her hands, a side effect of chemo. Sebastian inched closer to her and started rubbing her face. Could he sense his mother’s pain, or was he just practicing his hand-eye coordination?

A new immune system takes time to grow and be normal, Martinez said.

“You need to wait until that immune system is mature enough to be functional and able to fight viruses or respond to vaccines,” she added. “That usually happens about nine months to a year after the transplant is done.”

On Wednesday, June 14, Sebastian’s doctors delivered some surprising news: His T cell count in his bone marrow was steadily increasing above optimal levels. He was going to be released that afternoon, ahead of schedule.

“It was a mix of emotions,” Romero said. “You get choked up knowing we’re ready to go home, but at the same time, super scared because you’ve been in this environment where everybody knows they have to protect him.”

But it was wonderful to have the family back together again. Sebastian’s two older siblings could finally shower their baby brother with affection. They had been waiting patiently and loving Sebastian from a distance, but now, they could hug and kiss him.

“This is the closest they’ve all been since he was born,” Romero said. 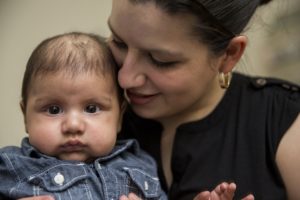 Romero nuzzles Sebastian at home, one week after his release from Texas Children’s Hospital.

Sebastian will continue to stay in isolation at home for at least three months. He was supposed to leave only for clinic visits three times a week to receive blood or platelet transfusions, but because of a fungal infection he contracted, Romero still takes him to the hospital for treatment every day for four to six hours. It’s an exhausting routine traveling back and forth from Katy to the hospital, Romero said, but at least they’re home.

“We’re so thankful that he’s been doing so good,” she said, her voice a couple octaves higher, as she nuzzled Sebastian’s neck and cuddled with him on the sofa in their living room.

Over the past four months, Romero and her family’s lives took an unexpected turn because of Sebastian’s SCID diagnosis. But Romero, ever the optimist, said she hopes Sebastian’s journey will raise more awareness about SCID and inspire others to become bone marrow or cord blood donors.

“I know there’s a plan and a purpose. I can see that through sharing our story,” she said. “If you could go, be a match and sign up, do it. You can save a life. What’s better than that? You can be somebody’s hero.”