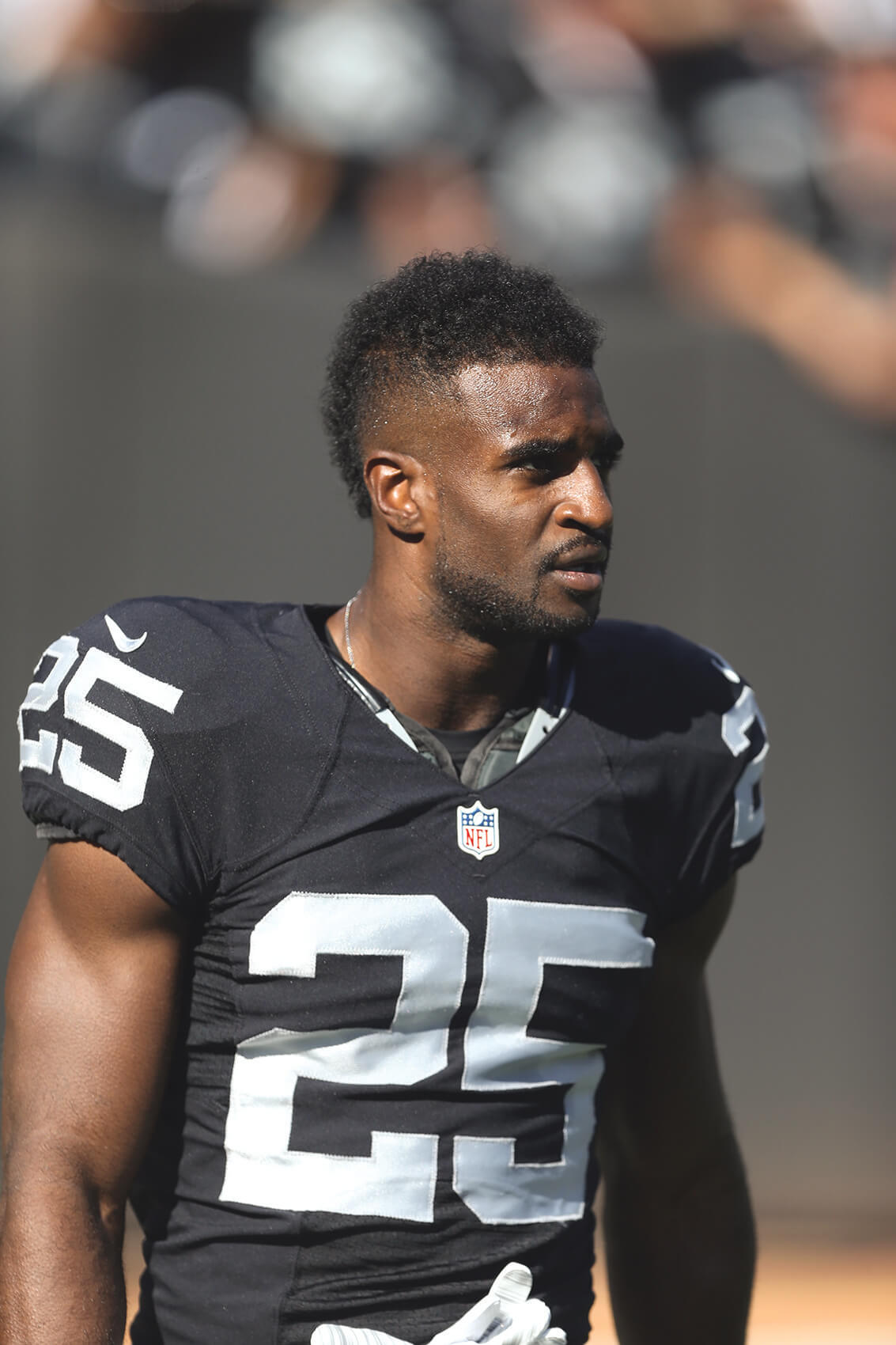 An 18-inch scar runs the length of D.J. Hayden’s torso, from the notch between his collar bones all the way down to his navel.

“The scar is a daily reminder of God’s plan for me,” said the Oakland Raiders cornerback. “I know he has a plan for me, and I just need to follow through with it.”

Hayden, who grew up in Missouri City, Texas, and played football at Elkins High School, likes to compare himself to a phoenix rising from the ashes. He’s had one football injury after another—at the University of Houston and then as a pro for the Raiders.

But he keeps making his way back to the field. Hayden’s most severe injury occurred during a full-pads practice at UH in 2012. The Cougars were preparing to take on the University of Tulsa Golden Hurricane, and Hayden was making a play he had executed hundreds of times before. But this time, he collided with fellow cornerback and friend Trevon Stewart.

Mike “Doc” O’Shea, head athletics trainer at UH, will never forget that day. Although he doesn’t make it to every practice, O’Shea was on the sidelines Nov. 6 when Hayden was hit and fell to the ground.

“Something just told me to put him on the medical cart and take him into the locker room, instead of having him walk,” O’Shea said. “We had a TV on and he told me that it started to get blurry. I knew it wasn’t a head injury because I had seen the hit and he didn’t hit his head. I knew right then there is something going south on us really quick.”

Hayden was taken by ambulance to what is now Memorial Hermann Red Duke Trauma Institute. There, trauma surgeon Ron Albarado, M.D., stepped in.

Albarado and his team realized Hayden was losing blood, but didn’t know the source. To find it, they cut open Hayden’s chest and broke his sternum. The injury turned out to be a massive tear to the inner vena cava of Hayden’s heart, an injury more typical of a high-speed car accident or wartime combat. The average fatality rate for a tear to the inner vena cava: 95 percent.

“Everything went right that day and God was on our side,” O’Shea said. “He put his hand on us, and if things wouldn’t have happened within that hour, D.J. wouldn’t be where he is today. We didn’t do anything special; we just went with our instincts and we probably had someone on our shoulder from up above telling us what to do.”

In a remarkable, even unimaginably quick recovery, Hayden was released from the hospital after six days. The 5’11” athlete, who typically weighs close 190 pounds, dropped 25 pounds and, at first, struggled to climb stairs. But he persevered. Just four months after his near-death experience, he ran a 4.3-second 40-yard dash at UH’s Pro Day.

“I still wanted to play football, and I had to be where I had to be, and I had to go where I wanted to go,” said Hayden, now 26. “It was just a process. It took me about three to four months, and basically I just had to keep working hard to get healthy and just challenge myself. I would go work out, and push myself to get through the workouts. I read the Bible.”

The following year, spring of 2013, Hayden went 12th overall in the first round of the NFL draft to the Oakland Raiders.

“At the time, you just hoped he would walk out of the hospital and live a normal life,” O’Shea said. “But he got drafted, played pro football. It’s quite remarkable.”

Hayden has spent the past four years with the Raiders. Foot and groin injuries took him off the roster for parts of 2013 and 2014. And in December 2016, he was placed on the injured reserve list for a hamstring injury, ending his season.

Come March, for the first time ever in his professional career, Hayden will be a free agent. Time will tell if this means a major career shift or if he will rise from the ashes, once again, to play pro ball. Either way, he’s prepared.

“I learned to trust my body a lot,” Hayden said. “Your body knows how far you can go. And I feel like I have become a great judge of my own mind. I have a better hold on how I can prepare myself mentally for different trauma situations.”

Until March, his plans are relatively low-key.

“I’m taking everything day by day,” Hayden said. “I’m looking forward to going home to see my family and stop at Pappadeaux while I’m there. I am really a homebody. I love to stay at home with my daughter, Dylan, and take it easy.”