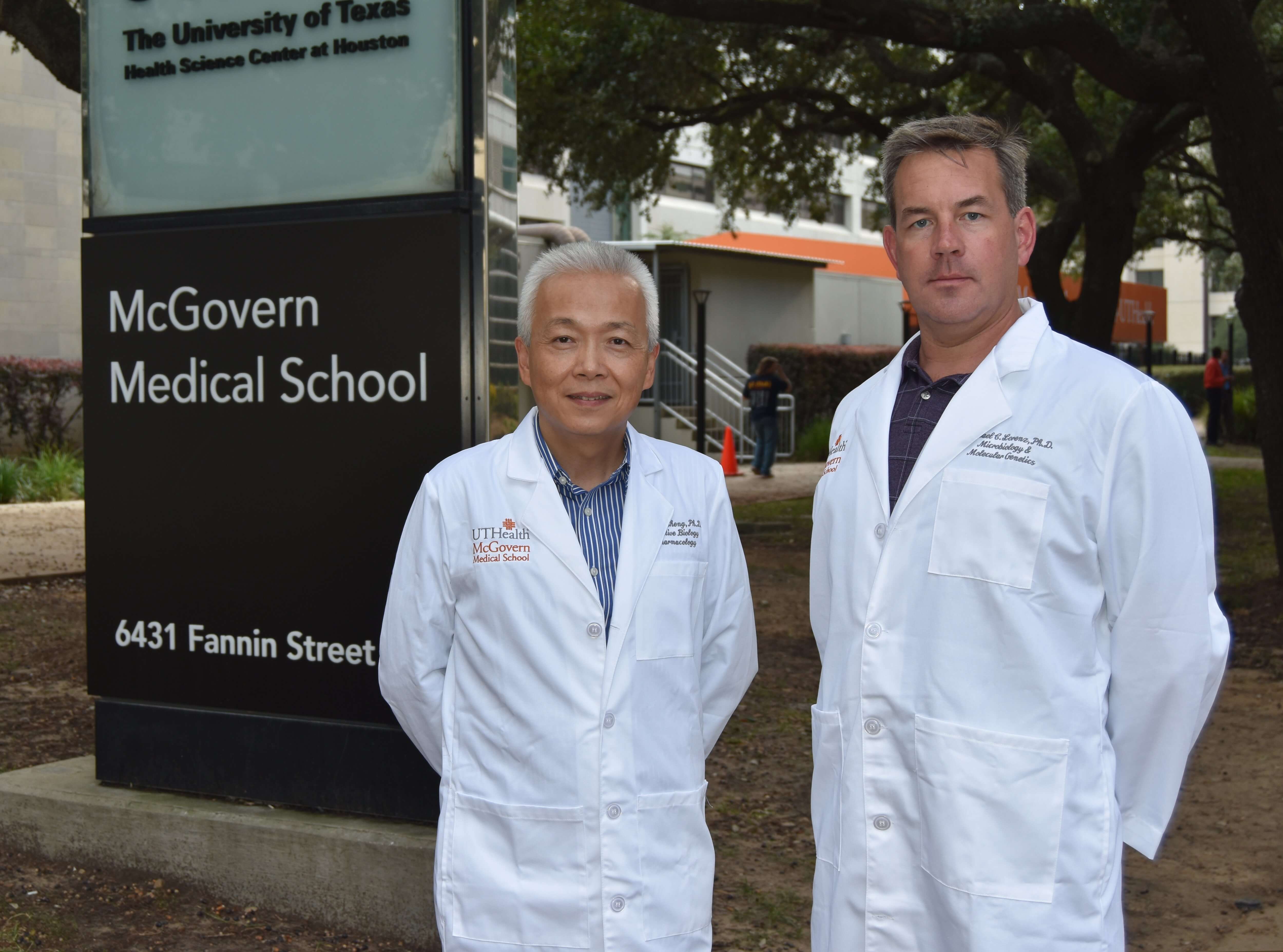 In recognition of their efforts to develop new treatments for fungal infections and stress-related chronic illnesses, respectively, Michael Lorenz, Ph.D., and Xiaodong Cheng, Ph.D., of The University of Texas Health Science Center at Houston (UTHealth) have been elected fellows by the American Association for the Advancement of Science (AAAS).

The tradition of electing AAAS fellows began in 1874 to acknowledge members for their scientifically or socially distinguished efforts to advance science or its applications. Lorenz and Cheng are discovery scientists at McGovern Medical School at UTHealth, and they were among 391 fellows recently elected.

“All human health boils down to the study of our cells and that’s what we do in the biological sciences,” said Lorenz, a professor of microbiology and molecular genetics at UTHealth.

Candida infections are a major health issue affecting tens of millions worldwide. Also known as thrush, these infections can occur in the mouth, the throat and the female urinary tract. His laboratory primarily focuses on the most serious manifestation of the disease, which is often life-threatening in patients hospitalized for other serious illnesses.

“We are trying to understand how Candida is able to resist the attack of the immune cells. The goal is to develop new targets for antifungal drugs,” Lorenz said.

“Mike’s use of Candida-macrophage interactions as a facile and relevant model system has proved to be an elegant tool to assess the fine line between fungal virulence and immune recognition. His seminal research findings have garnered national and international recognition,” said Theresa “Terri” Koehler, Ph.D., chair of microbiology and molecular genetics and the Herbert L. and Margaret W. DuPont Distinguished Professor in Biomedical Science at UTHealth.

“Mike is a credit to our institution, and I consider myself very fortunate to have such an outstanding faculty member in my department,” Koehler said.

Cheng’s work focuses on stress-related chronic illnesses. His team is working on understanding the physiology and pathophysiology of an exchange protein activated by cyclic AMP called EPAC, a key molecular switch for stress response. The team has developed inhibitors for this important drug target.

“The long-term activation of the stress-response system can disrupt your body’s balance, like a malfunctioning thermostat, and eventually leads to the development of chronic diseases. The levels of EPAC expression are often elevated in response to chronic stress. By specifically targeting this molecular switch, we can potentially treat chronic illnesses, such as chronic pain, by fixing the thermostat,” said Cheng, a professor of integrative biology and pharmacology and the Walter and Mary Mischer Distinguished Professor in Molecular Medicine at UTHealth.

Cheng’s laboratory is testing compounds designed to block this switch. The hope is that this research will lead to new treatments for severe or chronic pain, which affects approximately 1 in 3 adults in the United States.

“Dr. Cheng is an exceptional faculty member and well-funded by the National Institutes of Health. He is heavily involved in both research and medical school teaching,” said John Hancock, M.B, B.Chir, Ph.D., chair of integrative biology and pharmacology and the John S. Dunn Distinguished University Chair in Physiology and Medicine at UTHealth.

Cheng is also on the faculty of the Texas Therapeutics Institute at McGovern Medical School.

Election as an AAAS fellow is an honor bestowed upon AAAS members by their peers. New fellows will be presented with an official certificate and a gold and blue rosette pin on Feb. 18 at the AAAS Fellows Forum during the 2017 AAAS Annual Meeting in Boston.

The AAAS is the world’s largest general scientific society and publisher of the journal Science (www.sciencemag.org). AAAS was founded in 1848 and includes nearly 250 affiliated societies and academies of science, serving 10 million individuals.