Ten-year-old Reyli Hernandez was born with a severe craniofacial deformity. With help from doctors at Children’s Memorial Hermann Hospital, he has a new reason to smile. 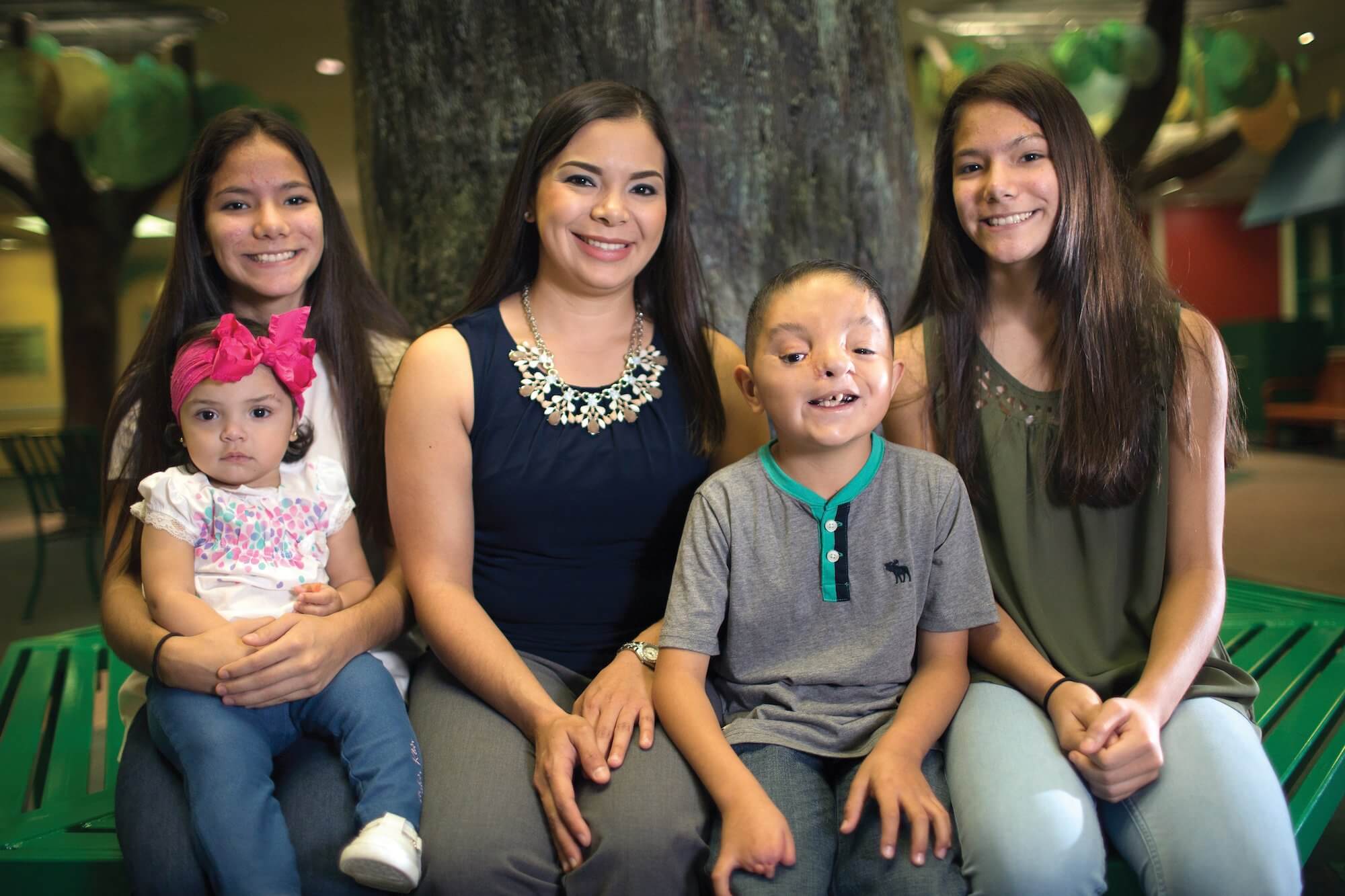 When Marissa Rodriguez of McAllen, Texas, became pregnant with her third child, she and husband Alfredo Hernandez were thrilled to learn they would be welcoming their first baby boy. But during a routine pregnancy checkup at seven months, doctors delivered unexpected and jarring news: Their baby would be born with severe craniofacial deformities.

“I went into depression,” Rodriguez said. “It was hard [because] nobody expects it. I prayed the day I delivered, hoping that it was not going to be true, that it was a mistake, but no.” On May 25, 2006, Marissa gave birth to Reyli. He weighed 7 lbs., 11 oz. and had a gaping hole in the center of his face. The clefts in his face—extreme gaps in the soft tissue and bone—left him unable to close his mouth and right eye.

“It seemed like his eyeball was practically popping out from the opening,” Rodriguez said.

Approximately 2,650 babies are born with a cleft palate and 4,440 with a cleft lip each year in the country, according to the U.S. Centers for Disease Control and Prevention. Reyli was diagnosed with Tessier clefts, named for French plastic surgeon Paul Tessier, M.D., whose seminal work in craniofacial surgery was published in 1976. Tessier facial clefts are more severe clefts that can affect the mouth, cheeks, eyes, ears and forehead. They are classified on a scale of 0 to 14, based on the location and extent of the cleft. Reyli’s clefts, types 3 and 4 on the Tessier scale, are extremely rare. It is unclear what causes craniofacial defects during a baby’s embryological development, but research suggests that genetics and environmental factors may play a part.

Like some babies born with craniofacial abnormalities, Reyli also suffered from hydrocephalus and underwent surgery to ease the pressure in his brain when he was just one week old. Doctors placed a shunt into a ventricle of his brain to drain excess fluid.

“It was tough knowing there was a [challenging] road ahead being back and forth with doctors,” Rodgriguez said. “I knew that he was going to have many surgeries.”

Reyli has undergone several surgeries to address his various defects, but his most extensive surgery was performed in Oct. 2015 by the pediatric surgical team at Children’s Memorial Hermann Hospital. It came about thanks to a generous donation made by retired Houston Texans Center Chris Myers and his wife, Jenny, through the Dreambuilders Foundation.

“Knowing what we went through every single day but seeing families that have to deal with unfortunate things like what Reyli’s going through … puts life in perspective,” said Chris Myers, whose 4-year-old son, Keane, was born with a cleft lip and palate and treated at Children’s Memorial Hermann.

Reyli is “such a special little boy,” Jenny Myers said. “He’s gone through so much in his life, and he’s so positive. To alleviate some of the pressure off his mom, [who is] working and has to take off to bring him here, and to be able to help him … is really rewarding and feels good.”

The day before Reyli’s surgery, his parents drove six hours from McAllen and spent the night with him at Ronald McDonald House Houston. They arrived at Children’s Memorial Hermann at 5:30 a.m. Oct. 20 to prepare Reyli for an extensive surgery that would reshape and reconstruct his entire face.

“For the previous and future surgeries, I like to think of it as painting the house and changing the furniture out,” Greives said. “They’re superficial things, mostly related to the skin and muscle of his face. But what we did for our facial bipartition surgery is really moving walls, changing the foundation and restructuring the entire bone of the skull. Then we go back and do all the soft tissue on top of that later.”

To prepare for the operation, Greives and his team created an anatomically accurate 3-D-printed skull based on Reyli’s X-ray computed tomography scans. The advanced mapping software and 3-D printing technology helped doctors visualize the spatial relationships of the skeletal parts of the nose, eyes and mouth even before entering the operating room.

“It’s a really difficult surgery, but having these[3-D-printed] guides is what makes it very cookie cutter, so [we] can do all the hard work beforehand,” Greives said.

During the surgery, Greives and his team were able to bring Reyli’s eyes closer together, widen his palate, reconstruct his nose and repair the defect in his skull. The surgery took eight hours.

“It’s very difficult to disconnect [emotionally] because you’re literally looking [the patient] in the face the entire time, but you’re seeing that effective change,” Greives said. “As I move the bones on the table, I see [Reyli’s] face change. As we move his jaw forward or move his skull around, I can actually see the physical change happening right in front of me in how close we can come to that ideal we’re striving for, [and] I can see in his eyes that he looks different than he did before, which is really unbelievably powerful.”

After the surgery, Reyli’s head was wrapped in bandages and his eyelid stitched shut to protect his eyeball. He stayed in intensive care for two days and continued his recovery in the hospital for another week. Since then, Reyli has made a full recovery and regained some normalcy in his life.

“It’s one of those things that takes a village, and Reyli’s story is really a testament to that,” Greives said.

“We have the capability through Dr. Greives to take care of the most complex patients, even if they’re older children, to be able to fix these deformities,” Shah added. “I’m proud to be part of a center that can do the entire range, so that we do the right thing for the right patient at the right age.”

Reyli, now 10, recently underwent oral surgery. When he is 18 and his bones have matured, he will need additional surgeries to reconstruct his nose and jaw and improve the shape and position of his eyeball. When asked if he felt anxious about these upcoming surgeries, Reyli said sanguinely, “No, because I’m happy.”

At school, his favorite subjects are math, reading and science. He also enjoys practicing the drums, piano and guitar during music classes at Bible school. Reyli even knows what he wants to be when he grows up.

With equal parts excitement and unwavering conviction, he said, “A doctor!”