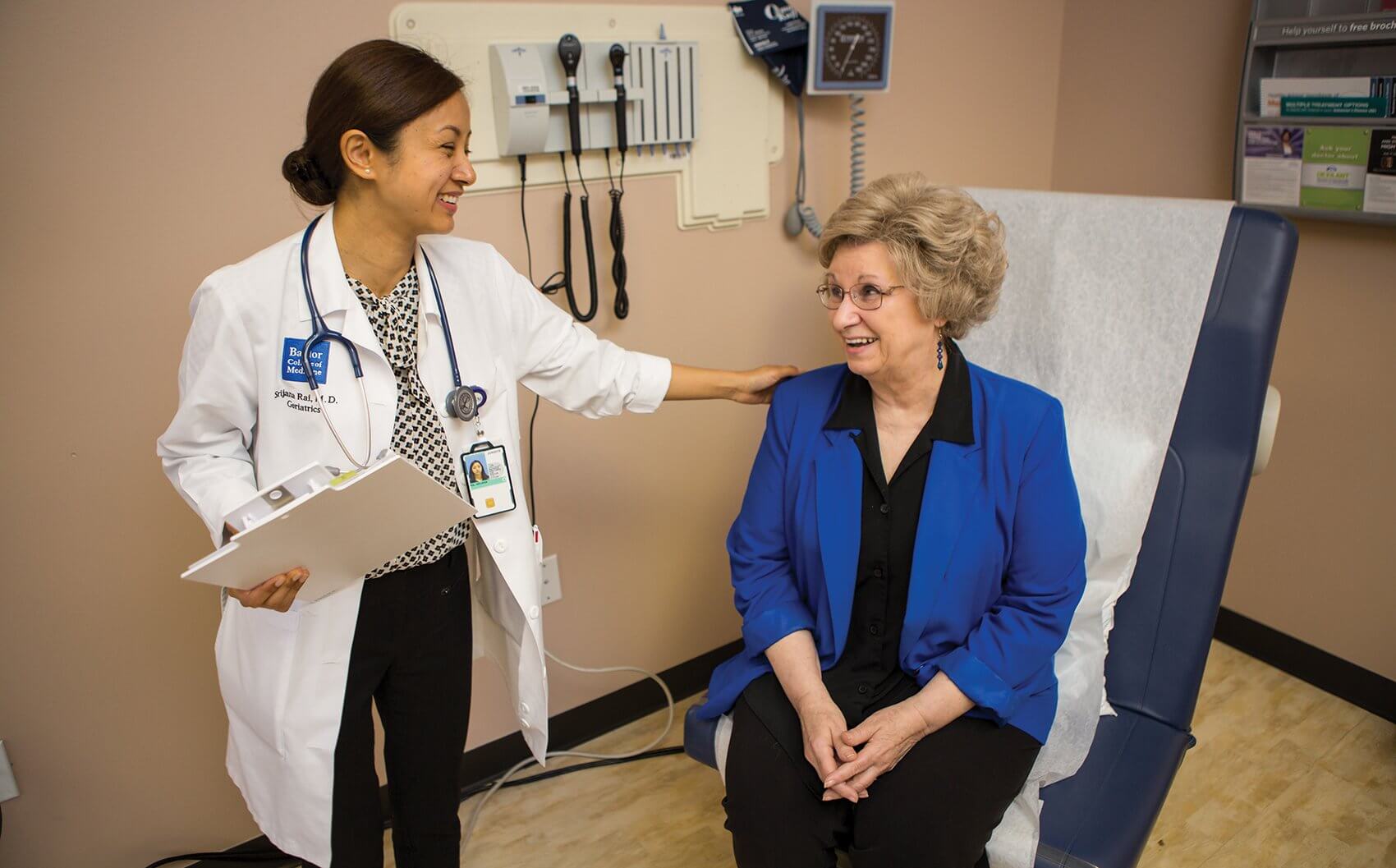 The end of World War II brought an unprecedented baby boom that forever changed United States demographics. Now those babies have grown up and continue to have an impact on the structure of the U.S. population. In 2012, the population aged 65 and over was estimated to be 43.1 million. By 2050, it’s expected to almost double to 83.7 million, according to the U.S. Census Bureau.

As the population ages, resources are limited in terms of specialized care for the elderly. That’s where Baylor College of Medicine’s Huffington Center on Aging comes in. Through clinical care, research and education, the Huffington Center aims to increase understanding of the processes of aging, as well as train physicians to provide critical specialized care for the aging population.

“Normal aging is not a disease, but there are some aspects of what’s called ‘altered presentation of disease’ that are not commonly understood by all health care professionals,” said Robert E. Roush, Ed.D., director of the Texas Consortium Geriatrics Education Center at the Huffington Center on Aging and a professor of geriatrics at Baylor. “Unless they’ve had some training in this area, they just don’t know what they don’t know.”

When a patient suffers from illness on top of normal age-related changes, physicians face more complexity. Even a basic examination takes longer—up to an hour or more. Geriatricians also face a balancing act when treating patients, as they strive for not only longevity but quality of life as well.

“In geriatrics, we care very much about preserving function as well as ensuring that we are doing everything we can to meet the patients’ goals for their health as they live out the later years of their life,” said Angela Catic, M.D., program director of the Geriatric Medicine Fellowship Training Program and an assistant professor at Baylor. “That may mean finding solutions that allow them to remain in their homes, working on making sure they’re continuing to interact with their family and social support in the community, whatever it is that makes their life meaningful.”

The Huffington Center works to achieve its mission through three main area of focus: research, education and patient care. In terms of research, the center seeks answers to questions like: What causes aging? What can be learned from animal models about aging processes? Are there ways to intervene or slow down the aging process?

The Huffington Center also has the largest geriatric fellowship program in Texas. Six fellows, who have already completed residency, spend a year with the Huffington Center. They work in the clinic twice a week, at TMC institutions like Baylor’s Park Plaza Senior Care Clinic and the Michael E. DeBakey Veterans Affairs Medical Center Houston. Fellows complete an academic project and take a variety of courses, from a basic introduction to geriatric medicine to an overview of research principles. A small number of fellows stay on for a second year, during which they focus more intensely on education or research.

Srijana Rai, M.D., is currently a fellow at the Huffington Center. She said the collaborative opportunities in the Texas Medical Center and the ability to work in so many different settings drew her to Houston.

“When I did internal medicine and decided to take geriatrics, I thought, ‘It’s part of internal medicine, only focused on a different age.’ But when I actually started, I could see there’s a difference between a general adult and geriatric adults,” Rai said. “From physiology to the way they react to drugs, it’s different in geriatric patients.”

Following the completion of her fellowship program, Rai will begin a three-year fellowship in hematology-oncology, with the goal of working in geriatric oncology. She said a close relationship with her grandfather originally attracted her to the field, a commonality among many geriatricians.

“Most will tell you they had very close relationships with grandparents or older family members or older people within their community, which gives them an appreciation for this part of our population,” Catic said. “Most geriatricians will also tell you they enjoy complexity. Not only are most of our patients very medically complex, but we are also facing issues around social complexity involving families and trying to navigate through changing functional status toward the end of their life.”

Programs like the Huffington Center are taking great strides toward preparing the medical community to serve the aging population, but Catic, Roush and Rai each stressed the importance of exposing all health care workers to geriatrics, from physicians and nurses to researchers and beyond.

“You’re going to see elderly patients regardless in a hospital or clinic setting,” Rai said. “It’s good to have geriatric experience and I strongly recommend that for all medical students and residents.”

Roush, who has worked at Baylor since 1972 and was involved in the founding of the Huffington Center in 1988, said he has seen a lot of progress in his years of working in geriatrics.

“There’s more understanding of the complexities of normal aging overlaid by disease processes and how we can help older people. The main problem is this imbalance in supply and demand, and it’s important to meet the growing health care needs of this burgeoning population,” he said. “Everybody should look at it this way: ‘If I’m lucky, someday I’ll be an older person. What do I want it to look like when it’s my turn?”