A Run With Meaning

Runners in the annual Chevron Houston Marathon have raised millions for charitable causes, including some of the institutions within the medical center

A Run With Meaning 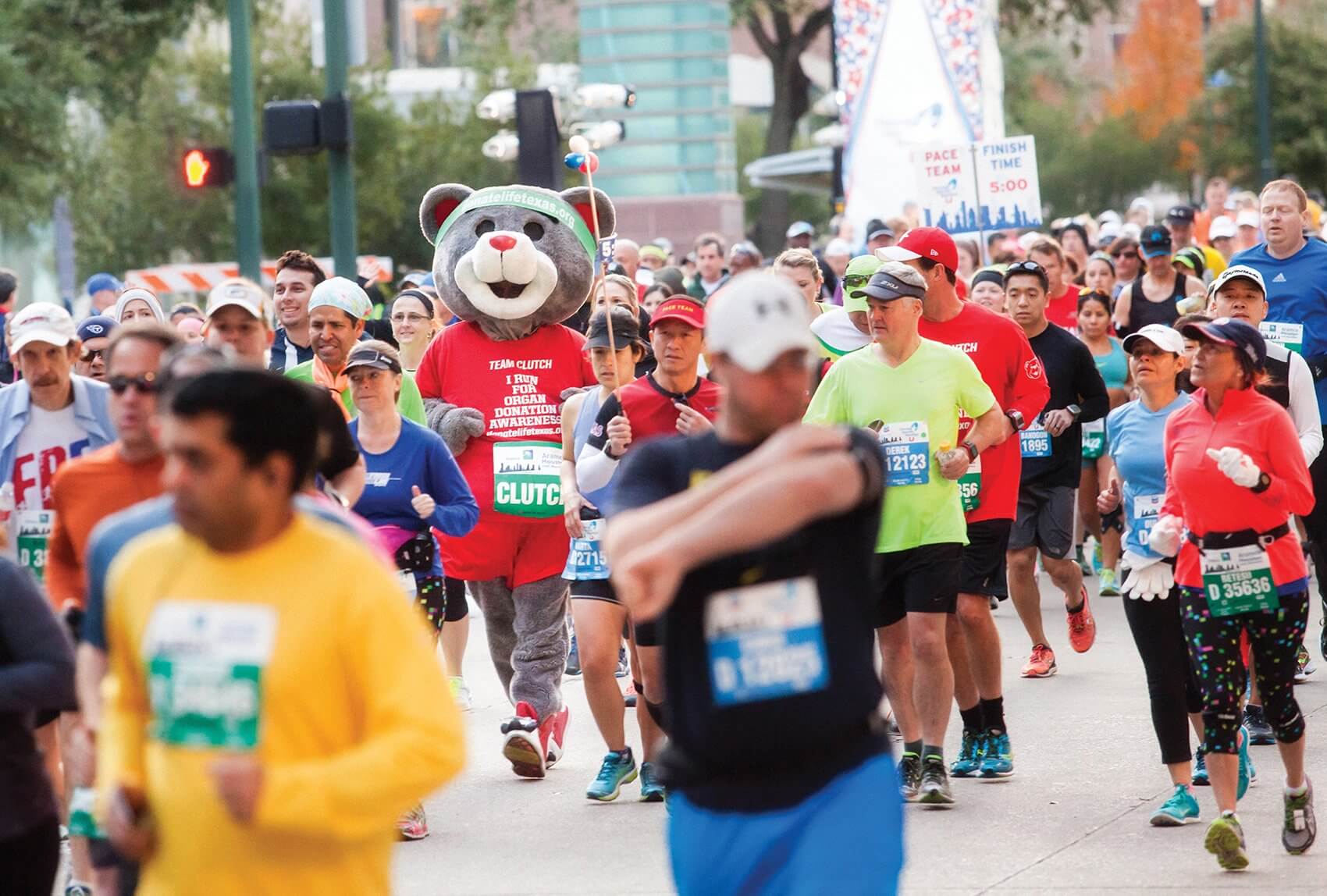 For many runners, a marathon is the ultimate test of endurance—a 26.2-mile show of mental and physical strength. For those running the annual Chevron Houston Marathon, the race also offers an opportunity to use that incredible feat to give to others in the Houston community and beyond.

Leading up to the Jan. 18 marathon, 62 organizations were officially part of the Run for a Reason charity program, including Texas Medical Center institutions Ronald McDonald House Houston and the Memorial Hermann Foundation. Run for a Reason benefits runners in addition to charitable organizations, by providing a way to enter the race even after it is sold out.

“Those participants have to raise a certain amount of money in order to receive their entry,” said Jennifer Tiedt, Ronald McDonald House Houston development coordinator. “We sold 60 of those this year. Then there’s also another option called a HERO Entry— they make a $350 flat donation up front and that secures an entry for them
as well.”

The marathon has been a successful fundraiser for RMH Houston, earning the organization over $400,000 in donations since they first participated in 2011. Those funds largely go toward basic upkeep of the House and the additional rooms RMH Houston runs throughout the medical center.

“In total, we operate 86 bedrooms in the medical center and five family rooms,” said Mikki Donnelly, chief advancement officer at RMH Houston. “It’s a large organization that touches many, many people, from not only Houston but all over the world. Those funds that we raise help us do that.”

Even beyond the generous donations, the marathon helps spread awareness of everything RMH Houston does for families in the medical center.

“We have a lot of people who are tapping into this who really don’t know much about the house,” said Tiedt. “Because of the events that we’ve had here for our team, it’s allowed them to come here and see firsthand our mission and what we do.” Those events include an appreciation dinner for RMH Houston’s marathon team members—over 90 this year—and a running clinic open to the public, where they signed up a number of team members.

Then there are those for whom fundraising is personal. A number of RMH Houston’s participants have personally benefited from the house. Tiedt cited one woman whose parents stayed at a Ronald McDonald House in a different city when she was going through treatment for an eating disorder.

“It was very serious and her parents are still so appreciative to this day, because she would not have been able to ever receive the treatment if they hadn’t been able to stay at this Ronald McDonald House,” said Tiedt. “It’s come full circle for her because she actually personally used the house here in Houston when her daughter had to be treated at MD Anderson.” That runner has raised $15,000 for RMH Houston.

It’s not just about awareness, it’s about taking a step, taking 60 seconds out of your day and going online to register. Not just thinking about it and knowing about it, but actually doing something about it. — Robert Boudwin, Houston Rockets’ Clutch

Overall, Run for a Reason has generated over $19 million for charity since its creation in 1995, but that represents only part of the money runners have raised. Many, like Robert Boudwin, run on behalf of charities not on the Run for a Reason list. Boudwin runs for LifeGift Organ Donation Center, and other related causes, thanks to a very personal experience with organ transplantation.

Boudwin’s name and face may not be familiar to many Houstonians, but his alter ego is. For two decades he has entertained the city as Clutch, the Houston Rockets’ mascot. During the 2014 and 2015 marathons, spectators and runners were treated to the sight of Boudwin running the half marathon in the Clutch costume. Though he loves to entertain and make people smile, the motivation to run is deeper.

At the beginning of 2012, Boudwin’s father, Paul, received a double lung transplant at Houston Methodist Hospital. He had been suffering from idiopathic pulmonary fibrosis for four years, and by the time he underwent surgery in February of 2012, his lungs had all but given out. He was on oxygen 24 hours a day and would get light-headed walking even very short distances.

Prior to their own experience, Boudwin said his family did not know much about organ donation. In fact, when the idea was first introduced, his father had doubts.

“He was against it beforehand, thinking it would be too expensive and unaffordable and the chances of actually getting one were not that great, all of which were not true,” he said. Boudwin himself was shocked to realize, as he looked at his driver’s license while in the hospital, that he was not an organ donor.

“It’s not just about awareness, it’s about taking a step, taking 60 seconds out of your day and going online to register,” he said. “Not just thinking about it and knowing about it, but actually doing something about it.”

Now Boudwin works to call people to action as organ donors and to raise awareness about the process. He raises funds and makes appearances for LifeGift and Nora’s Home, which offers transplant patients and their families an affordable place to stay as they await transplantation. Boudwin first dedicated the half marathon to LifeGift in 2013, but ran in normal running clothes that year.

Currently, there are over seven million registered donors in Texas, which represents about 38 percent of adults in the state. Increasing that number boils down to increasing awareness, which Boudwin’s eye-catching, Clutch- costumed run accomplishes.

“I think it’s a great opportunity for us and a big platform to create awareness about organ donation,” said Claudia Sanchez, public relations and multicultural outreach coordinator at LifeGift. “I mean, what better way than to see a giant bear running the marathon?”

Running in the Clutch costume is quite a feat. The costume alone weighs about 20 pounds—a burden that only increases as it gets drenched in sweat. Even the simple act of breathing becomes much more difficult while wearing a giant bear head, a bit of irony given that a double lung transplant inspired Boudwin’s runs.

“You want fresh air, and the exchange of oxygen is not the same as if you weren’t wearing the head,” said Boudwin. “The mixture is a little bit more your own carbon dioxide.”

Still, all the physical and mental exertion is worth it to Boudwin if he can help other families going through what he and his family did. The more people who see his message, the larger the donor registry grows. Each person who registers could potentially save multiple lives somewhere down the road.

“I remember very distinctly thinking my boys are only three years old. They’re not going to remember my dad if he passes now, and I didn’t want that to happen,” he said. “That’s been very special to me, that they get the time with him and they’ll always remember him now. A near-death experience and coming out on the other end alive, and alive through the selflessness of somebody else is pretty inspiring.”