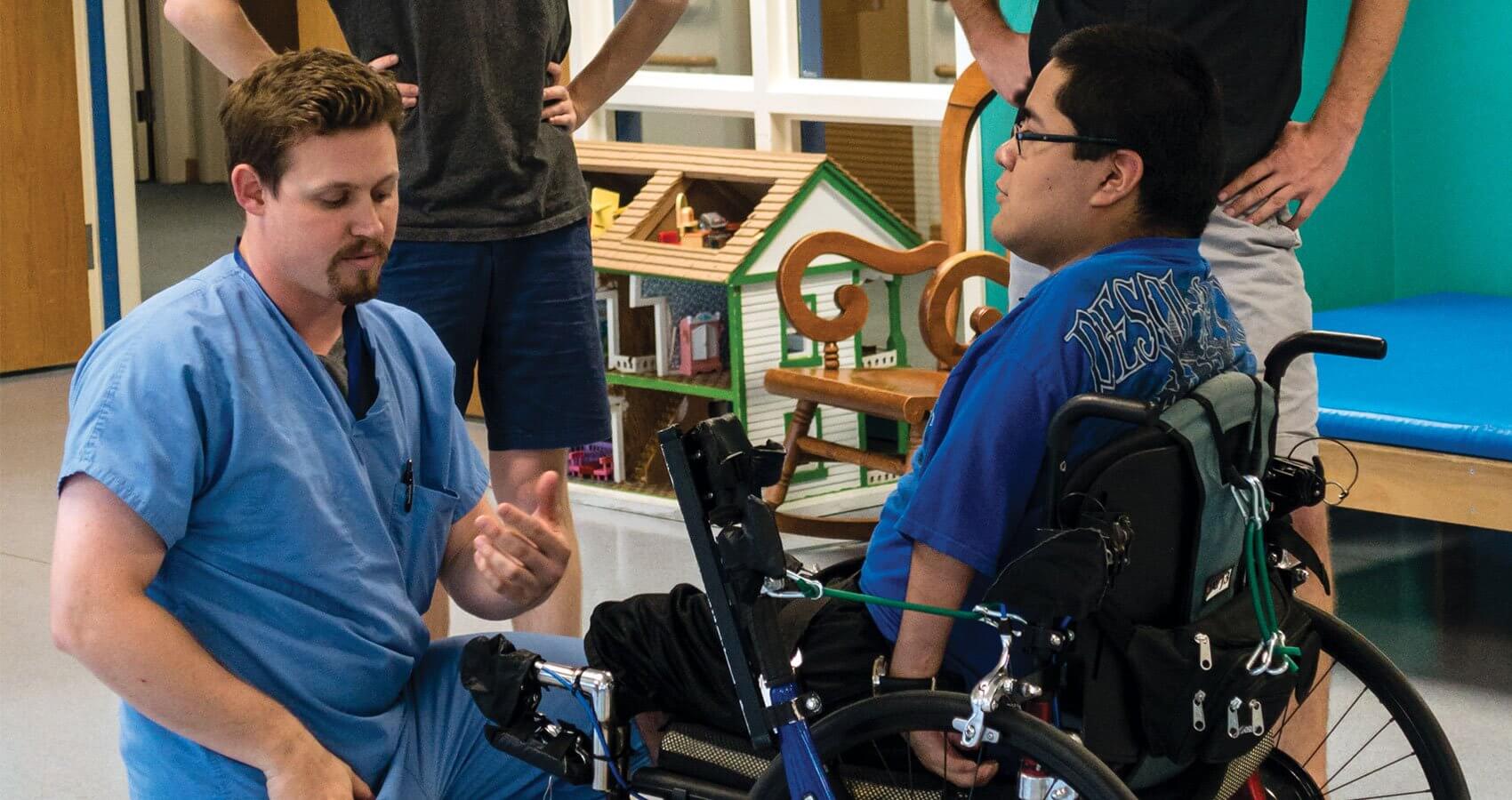 Rice University students have built a unique wheelchair for a Houston teenager who will now be able to row his way forward.

Pedro, 15, a patient at Shriners Hospital for Children-Houston, has had arthrogryposis since birth. This congenital disorder causes severe limitation of movement in all of his joints.

But Pedro’s path can be made easier. The Rice students are near completion of a four-year effort to make the wheelchair, which works with a paddling motion that does not require Pedro to turn the wheels of his manual wheelchair by hand.

Pedro’s disability prevents him from pulling his arms in at the elbows—though he can push out. In addition, his wrists are locked in a rotated position.

“He can’t operate a normal wheelchair because it would require him to grip the wheels, which he can’t do,” said Michaela Dimoff, a Rice junior and bioengineering major, and part of the Wheelin’ and Dealin’ wheelchair team that designed the new device. “He would be able to push them out, but once he’s there, he’s stuck.”

The new chair has push-forward paddles instead of armrests. Pedro places his hands inside fabric loops and pushes to move. The spring-loaded arms do the work when it’s time to pull his arms back to complete the cycle. “He pushes out and then relaxes, and the paddles come back,” said Dimoff, who spent much of her summer break working on the project.

Pedro has a motorized wheelchair he uses at school, but at home, when his family is not available to push him in a standard chair, he’s wheel-less. “He moves around his house by commando crawling with his forearms,” Dimoff said.

The chair was built at Rice’s Oshman Engineering Design Kitchen (OEDK) by a team that includes mechanical engineering majors Jared Elinger and Christina Petlowany and materials science and nanoengineering major David Smith, all juniors, and senior art history major Reed Thornburg. The parts were fabricated and assembled there with the exception of hub-mounted transmissions on each wheel that allow Pedro to go forward and backward and also give him a neutral gear.

Weeks after taking on the project, the team had its first meeting with Pedro to get specifics on his physical capabilities. “We spent a long time trying to figure out the scope of what he can do,” Elinger said. “It quickly became clear that for propulsion, a rowing motion was our only option.”

“For our initial prototypes, we used bicycle hubs,” Petlowany said. “Once that didn’t seem to work so well, we moved to bicycle hubs and chains. And we could make it work, but it didn’t meet our design criteria and clearly wasn’t a long-term solution.”

“Our industry mentor, Scott Daigle, the co-founder and CEO of Intelliwheels in Illinois, told us it would take hundreds of thousand of dollars and years to be able to machine our own gears and get them to work,” Dimoff said.

“We didn’t want Pedro to have to wait that long,” Petlowany added.

The students found their solution at a California-based company, Innovations Health, which sold them wheelchair-specific, lever-operated Wijit wheels at wholesale and advised the students on how to incorporate them into their existing design. The teammates raised funds to buy them, with significant contributions coming from OEDK, the Rice Center for Engineering Leadership and the Shriners International chapter in Houston.

Pedro’s input was critical at every step, Smith said. “We tested the chair with him six or eight times,” he said. “We’d test brakes, forward motion, speed, comfort, and each time we’d make changes and come back and say, ‘Hey, look at what we’ve done. What do you think of these things?’ He’s a great kid and doesn’t like to complain, but we told him, ‘If it’s not perfect, we want you to tell us.’ That really helped us in the design process.”

The students expect to bring the chair back to Rice at the end of September for what they hope are final touch-ups and are busy completing documentation so future engineering students can keep it in good repair.

Dimoff said doctors at Shriners have suggested the wheelchair design may be suitable for people with spina bifida, cerebral palsy and other disabilities. “It might even help a person with arthritis or someone who has really weak upper arms and doesn’t want to do this (rolling motion) all day,” she said. “Ergonomically, the way you move a standard wheelchair is terrible for your body. It’s terrible for your shoulders. The rowing motion is really a lot better.”

The students are proud of their success at accomplishing what seemed, for a time, impossible. The project began as one of the first offered by faculty adviser Ann Saterbak, a professor of bioengineering education and associate dean for undergraduate education, when she started her freshman design course four years ago. Other teams had tried and failed, she said.

“Dr. Saterbak told us, ‘You guys are it. You’re the last hope,’” Dimoff recalled. “So there was no excuse. It didn’t matter what we had to learn or what we had to door how long it took because this boy needs a wheelchair, and we can’t let him down.”