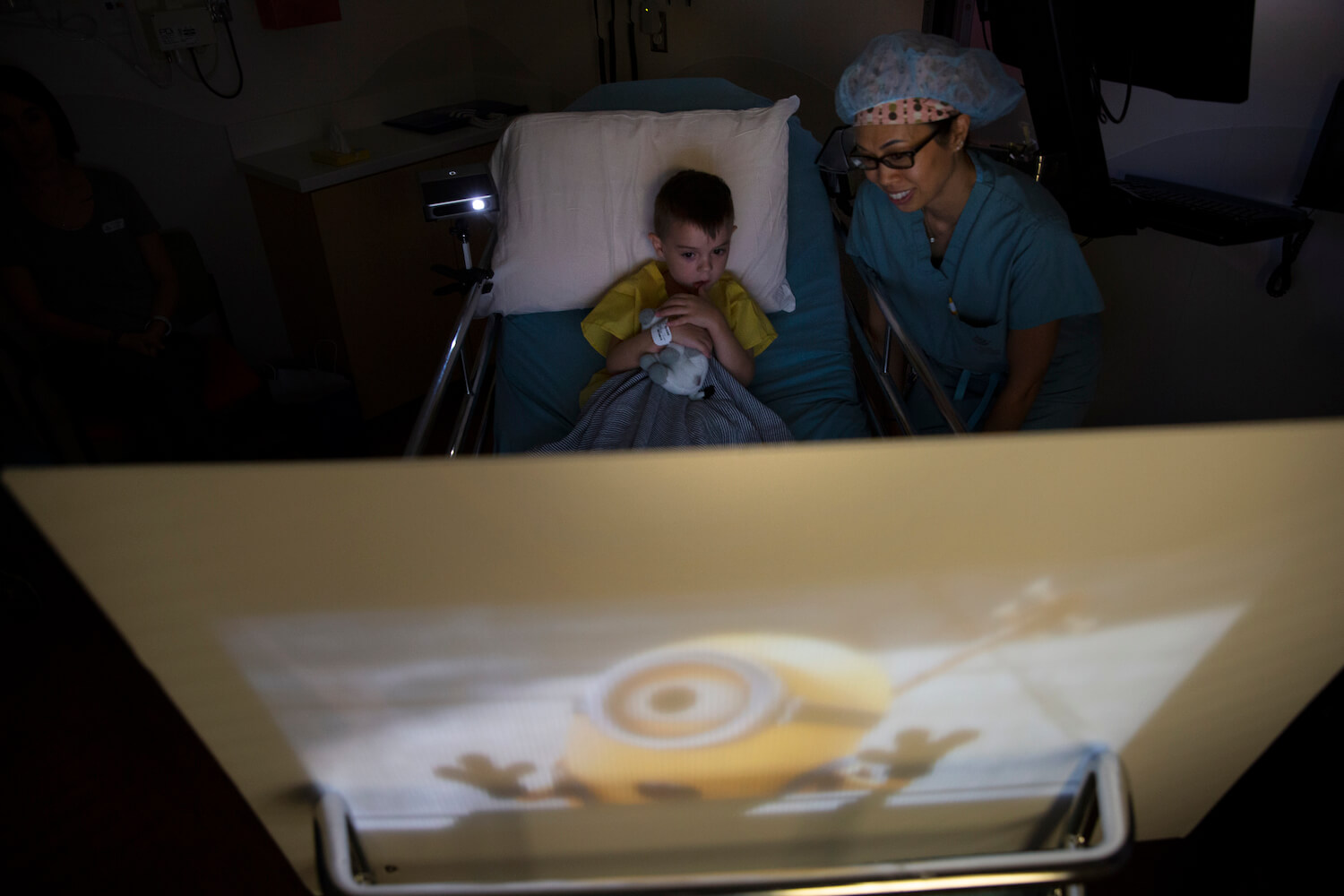 Charlie Pennell drifted into drowsiness with his head turned to the side as he watched a pair of cartoon aliens projected on the wall.

The 10-year-old, who held an anesthesia mask to his face, was relaxed and enjoying the interaction. The characters asked him to call out their names, and with each breath, the nitrous oxide slowly took effect as he fell asleep on the operating table.

The non-traditional method for entertainment while administering anesthesia is part of a new program at Texas Children’s Hospital aimed at calming pediatric patients ahead of surgery. Known as the CHARIOT program—Childhood Anxiety Reduction through Innovation and Technology—the suite of entertainment options is designed to engage and distract patients in the pre-operative setting and during the initial stages of anesthesia with video and virtual reality.

“The use of our various technologies has made it easier to focus our patients’ attention away from an experience that is new and different and possibly frightening to them and on to something that they’re much more comfortable with—and it helps them work through this experience to get surgical procedures that they very much need,” said Clint Fuller, M.D., a pediatric anesthesiologist at Texas Children’s Hospital. “It’s made it a much easier process both for them and for us.”

The suite of technology includes different options based on patient preference and maturity. For younger kids, a projector called the “BERT,” which stands for Bedside Entertainment Relaxation Theater, can play a selection of popular movies, including “Moana,” “Coco,” “Finding Dory,” “Cars,” and “Minions.”

“If there’s a long wait-time and the patient starts to get anxious during the wait, it’s a nice way to really distract them so their minds are not on the actual surgery or the fact that they’re hungry from fasting,” explained pediatric anesthesiologist Kathleen Chen, M.D., M.S., who leads the CHARIOT Program at Texas Children’s. “I usually tell them that today is your day, and whatever you want, we can give that to you.”

The BERT also projects interactive games, which are especially helpful for inhalation anesthesia induction in the operating room. Patients like Pennell speak into an anesthesia mask while a member of the anesthesia care team controls the reaction of cartoon characters. An especially popular game involves a dragon named Sevo, who breathes fire on his food (think cake, pizza or a taco) in order to cook it. As the patient breathes into the mask, Sevo breathes fire, eventually cooking his meal enough to gobble it down.

Most patients, however, are peacefully asleep by then.

“One of our notorious patient groups are 2- and 3-year-olds—they’re happy to see you out in the holding area, but then they want nothing to do with you when it’s time to separate from their parents,” Fuller said. “I played the Sevo game a few days ago with a 3-year-old, and she smoothly went to sleep, and, when she woke up, all she would talk about was her dragon. She talked about it the whole time and requested to play it again in the recovery unit. So, her whole perception of her visit here, the only thing she would talk about, was eating popsicles and her dragon. I think she had a pretty good experience.”

For older patients, Texas Children’s offers virtual reality goggles donated by Starlight Children’s Foundation, allowing for a completely immersive and alternative experience outside the hospital, including exploring the ocean or flying into another galaxy.

“Little kids aren’t really candidates for the VR because they need to have control of their surroundings, they need to see mom and to know what’s going on, whereas a 13-year-old, they may not care,” Chen said. “It’s 100 percent distraction and many older kids want that.”

In fact, Chen said, her team is doing a preliminary study analyzing how the VR goggles can help during IV placement while patients are awake.

“Right now, the preliminary data suggests that it minimizes pain or they’re not bothered by it,” Chen said. “So, the pain might be the same, but they’re happy to do it again so long as they have the virtual reality goggles.”

The CHARIOT program has been so successful in the anesthesia department that Texas Children’s is looking at how it could be useful in the clinic setting. Recently, Julina Ongkasuwan, M.D., pediatric otolaryngologist and director of the Pediatric Voice Clinic at Texas Children’s, employed the BERT to help distract a patient during an oral exam using a scope. Instead of having the young girl breathe into a mask, she had her open her mouth and say “Ahhhhhhhh” in order to get the dragon to cook his food.

Because so many young patients have trouble completing these exams, the idea of distracting them with an interactive game was appealing.

“I think it was really helpful, definitely with the anxiety, because we’re doing these invasive procedures where we’re putting scopes in their noses and their mouths and it’s kind of intimidating and scary for them,” Ongkasuwan said. “This is definitely a change in our approach, and I think anything we can do to decrease the trauma is beneficial, especially for those kids who have to come repeatedly.”

The CHARIOT program originated at Stanford Children’s Health in California and Texas Children’s is one of the first hospitals in the nation to adopt the entertainment suite. The multidisciplinary program supports the work of many members of the hospital’s care team, including child life, anesthesiology, surgery and nursing.