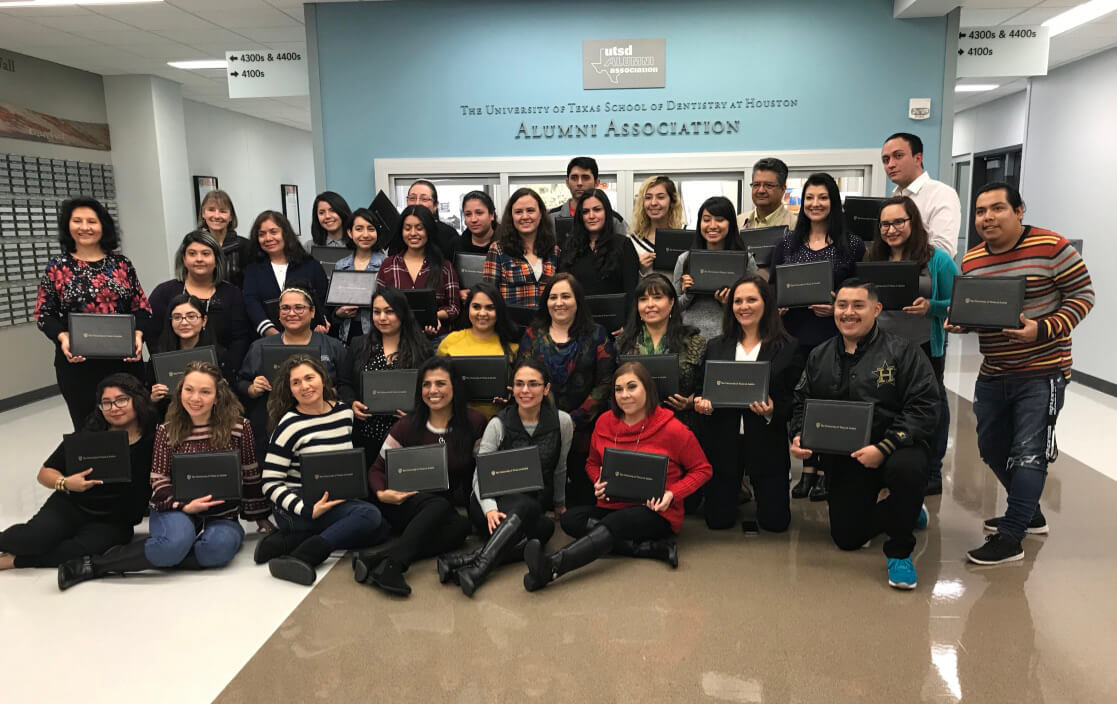 A new training program in the Texas Medical Center addresses the need for interpreters in Houston’s multilingual health care market.

The Healthcare Interpreter Certificate Program, which began last year in Houston, has graduated more than 100 people who speak Spanish and other languages. The course is offered by The University of Texas at Austin’s Center for Professional Education.

One graduate found a way to combine her love of language with a desire to pivot from graphic design and work toward a career in health care. 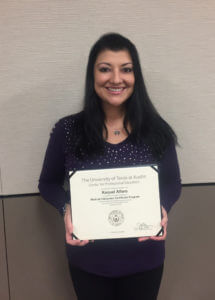 “It gave me a feel for the medical field and how I can help people with my language,” said Raquel Alfaro, 43, who starts a radiology technology program at Harris Health System this summer. She will be applying for part-time employment as a medical interpreter and hopes to take the national certification exam in a few months.

The 10-week classroom portion of the Healthcare Interpreter Certificate Program teaches the roles and responsibilities of a health care interpreter as well as practices and principles taught or required by national accrediting groups. Additional online work is required to complete the 40 hours of education. The total cost is $1,495.

The program initially was offered in Houston last year for bilingual English-Spanish speakers. The first group of 60 students began in September and graduated in December.

“There are a large number of people in the Houston area who have language skills and are very interested in using them in the health care setting,” said Sunshine Barber, associate director of marketing for UT Austin’s Texas Extended Campus, which offers career training programs.

The second cohort, which was language-neutral, graduated this week. 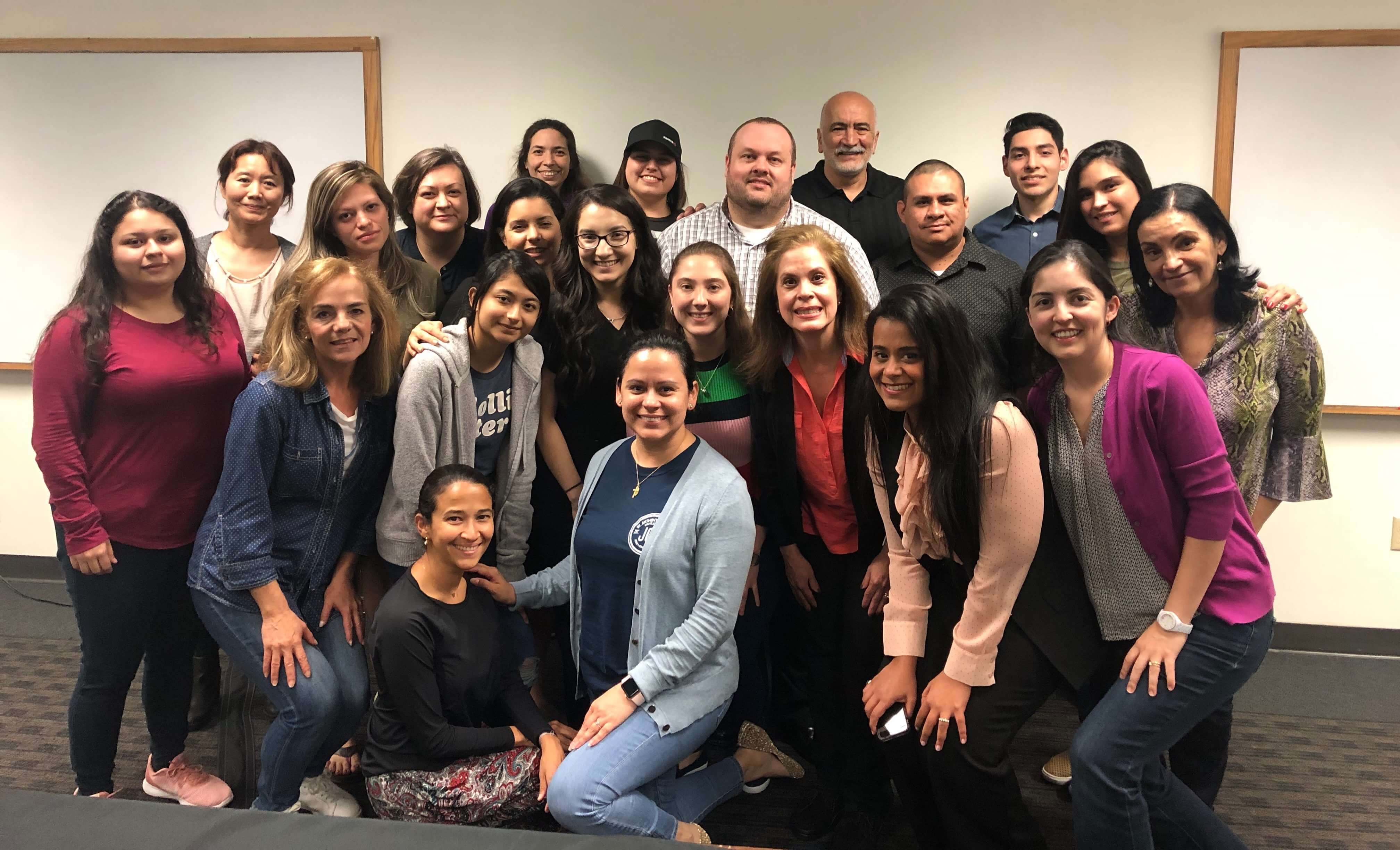 The second Medical Interpreter Certificate Program cohort in Houston, which was language-neutral, graduated in April 2019 from The University of Texas at Austin’s Center for Professional Education (CPE). CPE is part of the Texas Extended Campus, which offers a variety of career training programs. (Photo: Marina Irfan)

“The principles of interpretation are being brought to students and they bring their language with them,” Barber said.

Market research in Houston has shown an average annual salary “around $50,000” for a certified interpreter and that a license could be helpful for higher-paying jobs, Barber said.

At least 145 languages are spoken in the Houston metro area, according to U.S. Census Bureau survey data released in 2015. More than one-third of the region’s 5.6 million residents older than 5 spoke a language other than English at home and nearly 950,000—1 in 6—reported speaking English “less than very well.” Survey analysis determined that 3.5 million speak only English at home while 2.1 million also speak another language. The most common, Spanish, is spoken by 1.6 million residents. Other top languages in the region include Arabic, Vietnamese, Mandarin, Tagalog, Hindi and Urdu.

Some students in the interpreter certification program seek to enhance their skills in the health care setting and others aim to advance their careers.

Recent research suggests that professional medical interpretation is a health and safety issue.

An analysis of case studies released in 2018 in the Annals of Emergency Medicine found that language barriers in emergency departments can compromise care.

“Access to quality medical interpreter services is a public health issue,” said lead author Jay M. Brenner, M.D., in a news release from the Dallas-based American College of Emergency Physicians. “Using trained interpreters has been shown to lower readmissions and limits the possibility of patient misunderstanding, physician misdiagnosis or mistreatment.”

In an essay published in March by the American Medical Association’s Journal of Ethics, Chicago medical student Gabriela Aitken, who emigrated from Colombia, argued that training medical students as certified interpreters would help curb health disparities for Spanish-speaking patients.

It’s an idea Celeste Zsembery, a student at the UTMB School of Medicine in Galveston, embraced last year when she enrolled in the UT Extended Campus program.

While she learned estomago for stomach as an undergraduate Spanish minor, her vocabulary now includes vientre for tummy and barriga, which she first heard used to describe a belly in an OB-GYN clinic.

“The nuances of the language and being able to interpret on that level … you just don’t get that in a college classroom. You really need a professional level of training to get that polishing step to be able to interpret correctly,” the 30-year-old said. “The patients that I have worked with … almost everyone comments on how surprised they are at how well I can interpret and understand and communicate and they definitely did not make those comments before I had the class.”

Specialized vocabulary words, common terms for the same body part and “being aware of the different health care cultural practices” of Spanish-speaking populations were all vital aspects of the training, Zsembery added.

For instance, when an infant is brought to a pediatric visit wearing a beaded bracelet, the clinician may warn against a choking hazard.

“But culturally, that’s a mal de ojo—protection from the evil eye,” Zsembery said. “Being able to recognize that, maybe we can ask if we can pin it to the back of the child where they won’t choke on it and still be protected. That’s probably the most valuable thing I learned.”