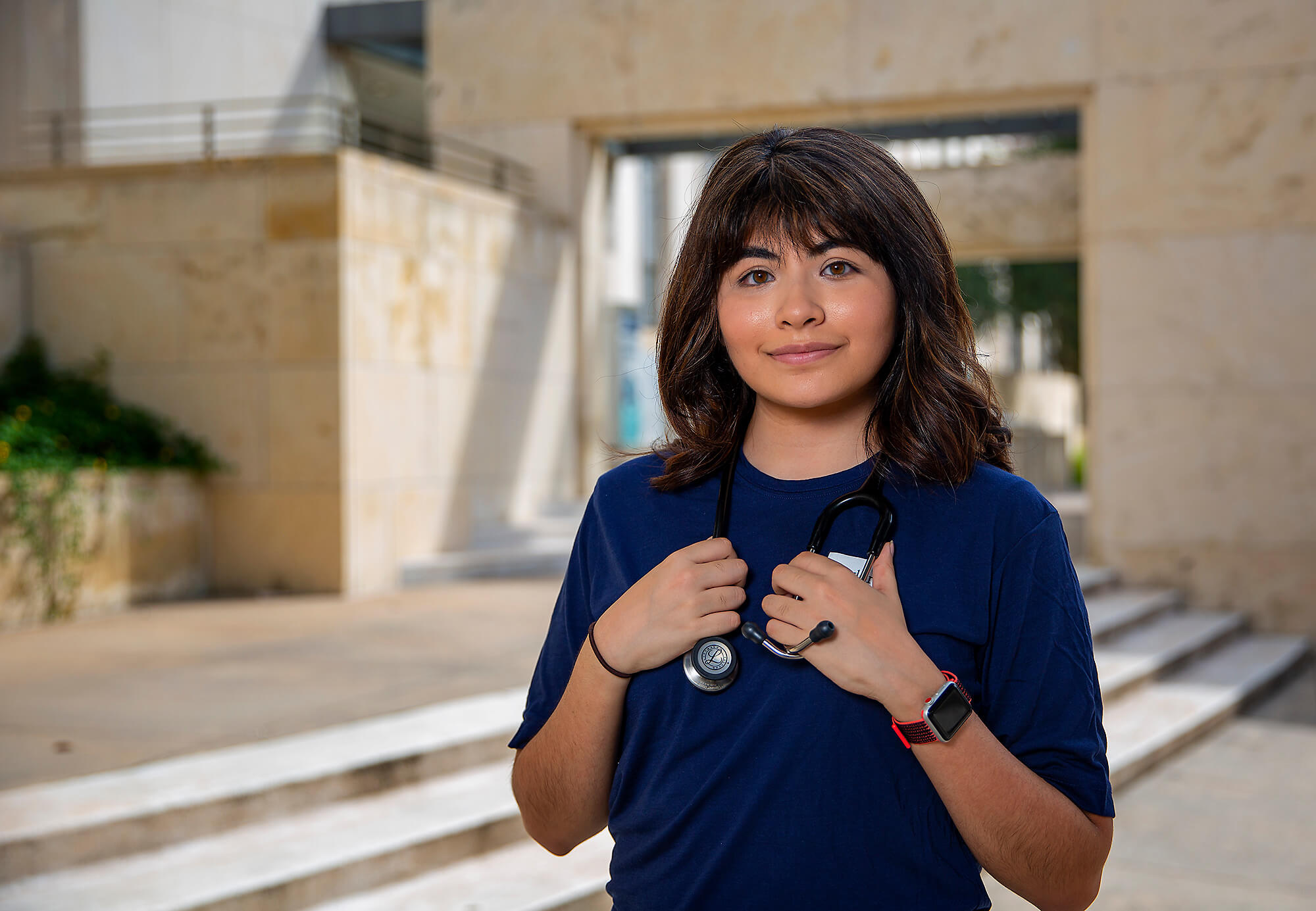 Ayleen Hernandez grew up in Houston’s East End neighborhood with Mexican immigrant parents who, to this day, speak only Spanish. When her parents needed to communicate with doctors who spoke only English, she served as their translator.

“Looking back, it would have been helpful to have a Latinx physician be able to see them, but I think me being in that role of a bridge is what planted the early seed for me to look into health care as a potential career,” Hernandez, 22, said.

As a first-generation college student, she earned her bachelor’s degree in molecular biology with a minor in Chicano/Latino studies from Pomona College in California in May. During college, she volunteered as a health insurance broker in the emergency room of a public hospital in Pomona Valley, where she learned that sharing her culture helped close the gap between Latinx patients and the health care system.

“A lot of the times there, I would see Latinx patients who were uninsured and were really scared to be there to begin with, but as soon as I introduced myself in Spanish as Ayleen Hernandez … I saw their shoulders relax, their facial expressions relax. They weren’t so scared to be in the ER anymore, especially being uninsured.”

Hernandez knew then that she wanted to become a doctor.

“Seeing those interactions and how it bettered their outcomes in the ER made me realize that if I can have this impact as just a volunteer, I can only imagine the impact I could have as a physician,” she said.

On July 24, 2020 via Zoom, Hernandez attended her first day of orientation as a member of Baylor College of Medicine School of Medicine’s class of 2024.

This year’s incoming class of 186 students has the most underrepresented minority students in the school’s history, with 33 Latinx and 14 Black students—a full 25 percent of the entering class. That’s a Baylor College of Medicine record and an 80 percent increase over the previous year.

While speaking the same language can help break down communication barriers, having a cultural understanding of a patient’s background can make health care even more effective.

“Patients who have doctors who look like them tend to follow advice more and can be healthier,” said Jennifer Christner, M.D., dean of the Baylor College of Medicine School of Medicine. “That’s why it’s really important when you’re making these very personal health choices that you have somebody you trust—sometimes that means having somebody who looks like you.”

“Just here in Houston, we’re one of the most diverse cities in the entire country, so we really should have a medical school population that reflects the diversity of our city,” Christner emphasized.

Data shows that, after graduation, underrepresented minority medical students are more likely to practice medicine in underserved communities. In fact, the University of Houston College of Medicine, which aims to train the next generation of primary care physicians in this region by addressing the major social determinants of health, is built on this premise. More than 70 percent of its 30-student inaugural class are individuals who belong to underrepresented groups.

The ability to speak the same language as patients and relate to them culturally strengthens the patient-physician bond.

Hispanic physician Jesus Vallejo, M.D., professor of pediatric infectious diseases at Baylor College of Medicine, understands how culture impacts health. He often tells his Hispanic patients that he grew up along the U.S.-Mexico border in Brownsville, Texas and said this often translates to higher follow-up rates with his Hispanic patients compared to his non-Latinx colleagues.

“I share with them that when I grew up, I had very similar experiences as they are having now,” said Vallejo, who also serves as the associate dean of admissions, diversity, equity and multicultural affairs at the School of Medicine. “I didn’t have all the advantages. I didn’t have all those little things that made life easier and better.”

Finding that common ground makes a world of difference.

Having a diverse physician workforce that reflects the U.S. population is not only important in building trust to improve patients’ health outcomes, but it’s also integral to improving drug trial outcomes.

Across the board, minorities remain underrepresented in drug clinical trials. White patients make up 72 percent of the participants involved in novel drug trials approved by the U.S. Food and Drug Administration (FDA), whereas Black and Hispanic patients only represent 9 percent and 18 percent, respectively, according to the FDA’s Center for Drug Evaluation and Research.

“There is distrust and there are good reasons for that,” Vallejo said, referring, in part, to the Tuskegee Syphilis Study. “Having people that look like you, coming to you, approaching you about a study, and presenting to you what the benefits and what the risk factors are, is incredibly important.”

Having people of all colors participate in clinical trials helps researchers gain a clearer understanding of a potential drug’s safety and efficacy. While all people are biologically similar, a host of genetic differences affect how drugs are metabolized in different ethnic and racial groups.

Now, as biotech and pharmaceutical companies race to develop a vaccine for the novel coronavirus pandemic that is disproportionately affecting people of color, clinical trials need diversity more than ever before.

Overrepresentation of underrepresented minorities during the pandemic

The coronavirus pandemic has exposed the systemic health disparities and rampant inequities faced by people of color.

“The coronavirus pandemic has revealed how deep-seated these inequities are, specifically in communities of color, and it certainly has amplified the social and economic factors that contribute to poor health outcomes,” Vallejo said.

Although many health inequities drive up coronavirus infection rates among the Latinx and Black populations, underlying health conditions—such as cancer, diabetes and obesity—put them at greater risk of severe COVID-19.

“Some diagnoses are not considered in Hispanic/Latino patients or African American patients as early as they are in other groups,” Vallejo said. For example, studies show that colon cancer and breast cancer screenings are dramatically low among people of color. “You think about hypertension and diabetes, but there are the things that affect this community that, for such a long time, has suffered from inequities. My hope is that when we start getting a more culturally competent physician workforce, that that gap may begin to narrow.”

Historically, the medical student body and, subsequently, the physician workforce, have failed to reflect the demographics of the city, the state and the country.

In 2009, the Liaison Committee on Medical Education (LCME), the accrediting body for medical schools in the United States, established an official set of guidelines designed to increase gender, racial, cultural and economic diversity. Those guidelines required medical schools to declare their own diversity categories and standards, and provided training for admission committees to take a more holistic approach to the selection process.

While there has been a small-yet-steady increase in minorities in medical schools, this trend still does not reflect the shifting demographics of the U.S. population. The numbers of Black, Hispanic, Asian and Native Hawaiian or Pacific Islander people of both genders are increasing across the nation, while the proportion of non-Hispanic white Americans is declining. People of color are expected to represent a majority of the population by 2050, according to the U.S. Census Bureau.

“We had to not just check that box, but really take those recommendations and make them our own,” Christner said. “It’s one thing to check a box, but it’s a totally different thing to say, ‘This is what we believe in at Baylor College of Medicine School of Medicine, this is what’s important to us and we’re going to do it because of that.’”

Baylor College of Medicine School of Medicine moved beyond the LCME requirements and developed pipeline programs with its affiliated schools to attract and recruit more students of color. The Baylor College of Medicine Academy at Ryan, a magnet middle school located in Houston’s Third Ward, launched in 2013 with underrepresented minorities making up approximately 75 percent of its student body. Baylor’s other school, DeBakey High School for Health Professions, has a total minority enrollment of 89 percent, according to U.S. News.

Recently, Baylor College of Medicine partnered with two institutions of higher learning—Xavier University of Louisiana, a historically Black college, and the predominantly Hispanic St. Mary’s University in San Antonio—to launch medical track programs for undergraduate minority students that serve as a direct thoroughfare to the School of Medicine.

“The school is really tapping into a lot of different opportunities and more recruitment at predominantly Hispanic undergraduate and African American institutions to be able to increase our numbers and show people that we do have a very inclusive culture at Baylor,” Vallejo said.

Vallejo, who also helms the newly formed Race in Medicine Task Force, also will review and revise the School of Medicine curriculum to include more people of color.

The number of underrepresented minority students in Baylor’s incoming class is a win for the medical school and, ultimately, patients. Faculty members and students—including Ayleen Hernandez—hope the trend will continue and serve to inspire more students of color to pursue medicine.

“When I first heard … that this class broke diversity records, I was so happy,” Hernandez said. “It makes me feel this feeling of ‘Alright, it’s time to get to work now.’”