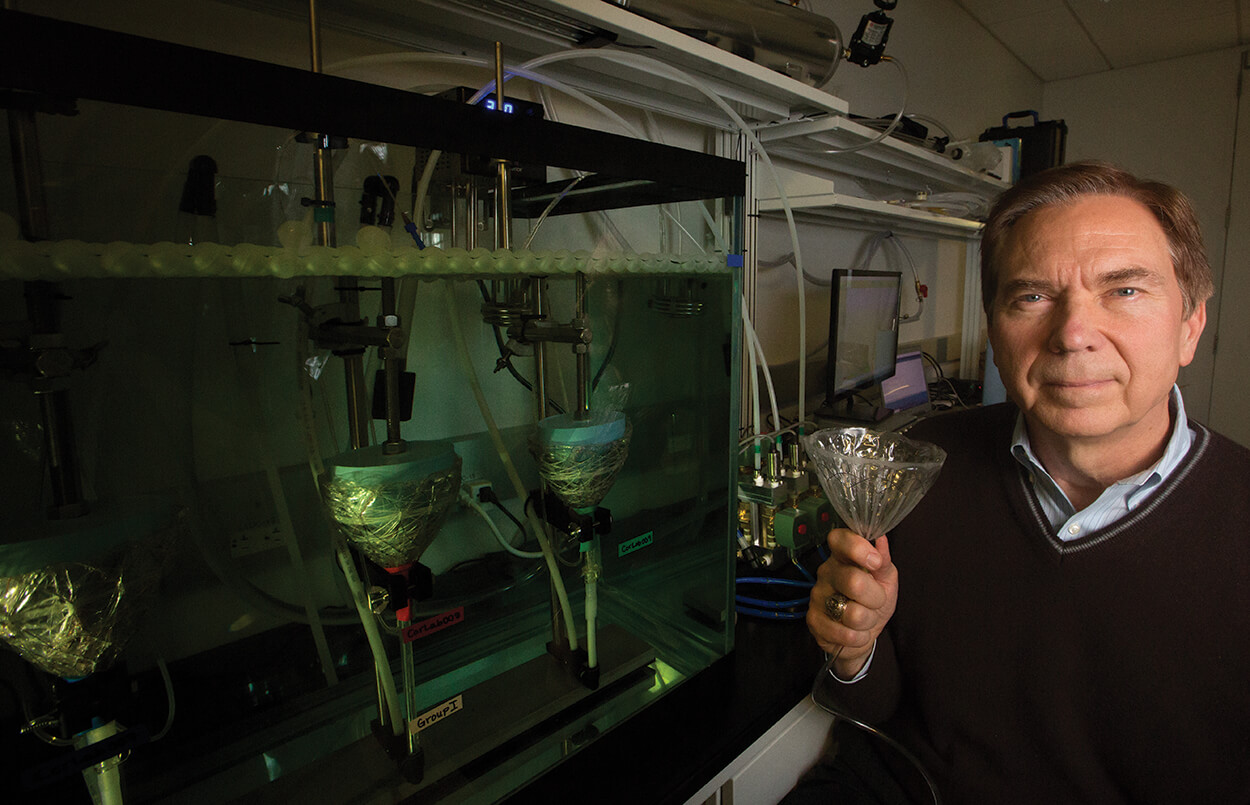 How do we combat heart failure? Two startups based in the Texas Medical Center, CorInnova and Alleviant Medical, are working on novel solutions. Both companies are part of the TMC Venture Fund portfolio, which aims to bolster innovation across Houston’s health care ecosystem. The $25 million fund launched in 2017.

A device in development at CorInnova aims to use “soft robotics” to prolong the lives of patients suffering from heart failure.

The new device wraps around the heart and squeezes it to increase blood flow—but importantly, never comes in contact with the blood itself. Leaders at CorInnova say that lack of blood contact will make it dramatically safer for patients, reducing complications like stroke, blood damage and kidney problems that can be associated with other heart devices.

“Not touching the blood is a  big deal, as this feature offers a dramatic advantage over standard therapy,” CorInnova CEO William Altman said.

The company is housed within Johnson & Johnson Innovation’s JLABS @ TMC accelerator. In 2015, CorInnova received a $6.1 million investment from the Wellcome Trust, a United Kingdom foundation that supports health research and innovation and has said the technology could be “transformative.” The TMC Venture Fund announced its investment in CorInnova in 2018.

“CorInnova could revolutionize the market the way the pacemaker did,” said Juliana Garaizar, director of the TMC Venture Fund.

Heart failure occurs when the heart is no longer able to supply enough blood to meet the body’s needs. There is no cure. Though the preferred method for treatment is a heart transplant, precious few hearts are available. Long-term devices, known as chronic LVADs (left ventricular assist devices), can also be used to help with blood flow, but these pumps require invasive surgery. Furthermore, fewer than 12,000 LVADs are implanted annually for long-term use, in part, due to strict eligibility requirements for the surgery— generally, those over age 65 may not be eligible. Short-term LVADs (for less than seven days’ use in the hospital) also touch the blood and many patients can’t use them either.

CorInnova hopes its device can help fill the gap. “If you don’t qualify for an LVAD—and 90 percent of patients don’t qualify—this would be an alternative,” Altman said. The device could support patients in the hospital, allowing them to recover and return home after a short-term heart injury. Or, for patients with end-stage failure, the device could extend life by six months to a year in a gentler way, without the risk of blood contact, Altman said.

The CorInnova device encases the heart, its saline-filled chambers closely hugging the organ. It inflates with air in synchrony with the heartbeat, gently squeezing the heart to increase blood flow. The soft, robotic device is collapsible and can be implanted through minimally-invasive surgery.

The company says hospital stays following device implantation would be 80 percent shorter than for long-term LVADs, and adverse effects could be at least 30 percent fewer, compared to both short-term and long-term LVADs. And most patients with heart failure are too sick to be eligible for an LVAD anyway, which is where CorInnova believes it can serve as an alternative. CorInnova also says the device can help solve another problem—heart failure that occurs after heart attack, due to structural changes in the heart. Outfitting those patients with the device could help prevent the heart from enlarging following a heart attack by enhancing the correct motion of the heart,  Altman said.

Since 2015, the device has been tested in 20 large animal studies, primarily at Texas Heart Institute and at Texas A&M University. Preliminary results show that it can increase cardiac output by 50 percent in animals.

For now, the company is focusing on clinical applications in which the device would be used for about a week, although one device tested successfully for 100 days. CorInnova leaders believe that, theoretically, they can create a device that can be used for at least three years.

Next year, the company will begin designing a version of the device that is sized for humans, and by the end of 2021, it hopes to complete its first study in 6 to 10 people.

For Altman, the work his company is doing is personal. “My father-in-law died two years ago from heart failure,” he said. “He is precisely the kind of person who could have used this device.”

Alleviant Medical is developing a new, minimally-invasive device that relieves pressure buildup in the left atrium of the heart, one of the key drivers of heart failure.

Millions of patients suffer from congestive heart failure, and Alleviant expects its pioneering therapy to be a good fit for about a quarter of them—those sick enough to be hospitalized occasionally, but healthy enough that they don’t yet need a heart transplant.

The company is making rapid progress. The device is being tested on pigs at Houston Methodist Hospital and Texas Heart Institute, and functioning as intended, said CEO and co-founder Jacob Kriegel, M.D.

“Our early results have been promising and exciting,” Kriegel said. “The last couple months have included a dramatic increase in testing the device, rather than conceptualizing and prototyping the device.”

Congestive heart failure mainly affects older adults. Over time, the heart’s pumping mechanism grows weaker and the organ can’t circulate blood effectively. Patients experience a buildup of pressure in the left atrium of the heart, leading to shortness of breath and a feeling often compared to drowning, due to a buildup of fluid in the lungs. The condition can result in several hospitalizations per year and, eventually, may require a heart transplant.

Congestive heart failure is notoriously difficult to treat. Prescription medication can treat the symptoms but does not address the root problem, Kriegel said. Other interventions may require inserting a stent in the heart, which also comes with risks.

In recent years, Kriegel said, researchers have discovered that reducing left atrial pressure can improve symptoms. Alleviant’s innovation is a sort of “pressure- relief channel” that creates a connection between the left and right atrium of the heart, allowing blood to flow from the former to the latter. “Basically, we’re shifting pressure around to a different area of the heart that can handle it much better,” Kriegel said.

In 2017, Alleviant was one of five firms that received the first round of investments from the TMC Venture Fund.

“They have already captured a lot of attention from investors and strategic partners, so hopefully this revolutionary method of alleviating congestive heart failure will soon be available in the market,” said Garaizar, director of the fund.

Alleviant is a “TMC company, born and bred,” Kriegel said. The device grew out of its founders’ participation in TMC Biodesign, TMC’s one-year innovation fellowship, and the company matured while it participated in TMCx, TMC’s business accelerator. Now, it’s based out of TMCx+, TMC’s coworking space for health care startups.

“The cardiovascular community here is strong,” Kriegel said. “I think it’s been a big advantage for us to  be here.”