Solutions: A Pen that Detects Cancer in Real Time

Solutions: A Pen that Detects Cancer in Real Time 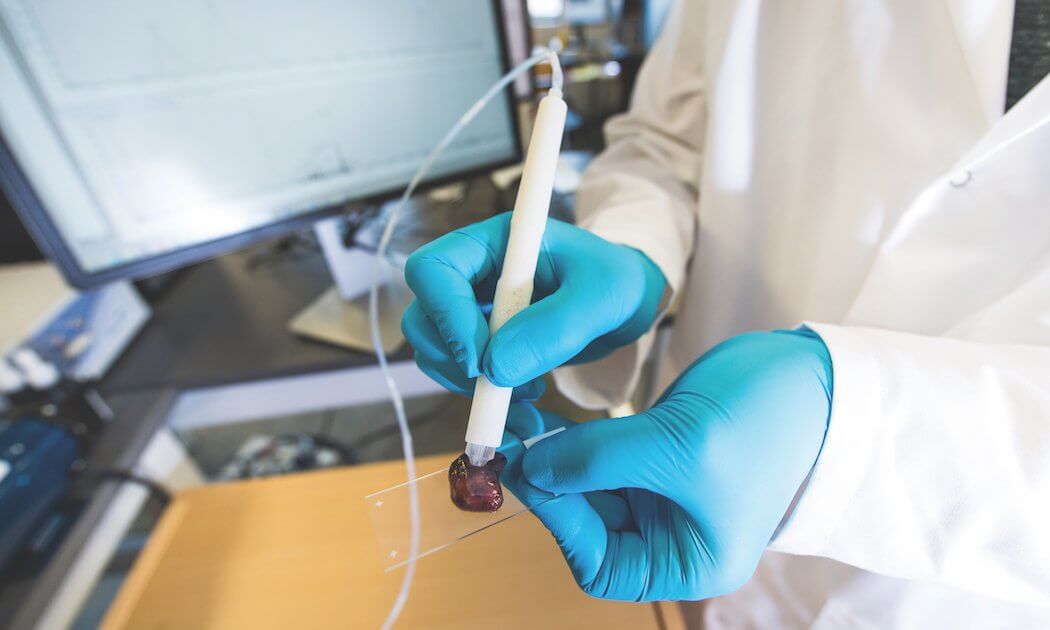 One telephone call triggered a new device that aims to give surgeons more precise diagnostic information about what to cut and what to preserve during cancer surgery.

Livia Schiavinato Eberlin, Ph.D., assistant professor of chemistry at The University of Texas (UT) at Austin, made that phone call, and James Suliburk, M.D., associate professor and head of endocrine surgery at Baylor College of Medicine, answered it.

“She wanted to test a mass spectrometer to see if it would rule in or rule out cancer,” Suliburk said. “I responded with ‘Yes!’” 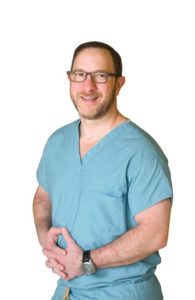 A surgeon holds the MasSpec Pen against the patient’s tissue and uses a foot pedal to trigger the automated analysis, waiting a few seconds for a result. The pen releases a drop of water onto the tissue, and small molecules from the tissue migrate into the water.

Then the device drives the water sample into the mass spectrometer, which reads thousands of molecules as a molecular fingerprint. When the MasSpec Pen completes the tissue analysis, the words “Normal” or “Cancer” appear automatically on a computer screen. Surgeons then know which tissue to remove and which tissue to leave in the body.

Significantly, the pen allows surgeons to analyze tissue while it’s still in the body, unlike frozen section analysis, the current method for diagnosing cancer during surgery and determining the boundary between cancerous tissue and healthy tissue.

The frozen section process, which has been around for 100 years, involves the removal of tissue or an organ so it can be studied under a microscope. Frozen section is often slow and sometimes inaccurate, and each sample can take a pathologist as much as 45 minutes to prepare and interpret, increasing the patient’s risk for infection.

In addition, frozen section analysis is difficult to interpret for some types of cancers. And once the tissue or organ is removed, it can’t be put back, said Suliburk, who often operates on the thyroid.

“We operate to remove a part of or all of the thyroid,” he said. “What we find is that a majority of the patients will not have cancer, but until now, our diagnostics were not to the point, yet, where we could improve that procedure.”

But with the MasSpec Pen, cancerous tissue is accurately identified in about 10 seconds, he said. 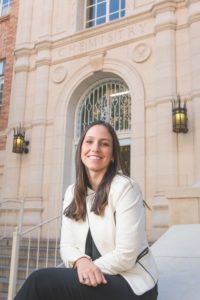 Livia Schiavinato Eberlin, Ph.D., chemistry professor at The University of Texas at Austin.

The MasSpec Pen was developed by a team of scientists, surgeons and James Suliburk, engineers from UT Austin, Baylor and The University of Texas MD Anderson Cancer Center.

Led by Eberlin, the team has demonstrated that the pen diagnoses cancer in live, tumor-bearing mice during surgery without causing any observable harm to the tissue or stress to the animals.

“We anticipate certain lesions will be 90 to 95 percent probable of a tissue diagnosis, but we want to give a more precise diagnosis,” Suliburk said. “Our goal is to be more than 95 percent accurate.”

The team is now refining the MasSpec Pen so it can read samples placed on microscope slides.

Suliburk expects to start testing the MasSpec Pen during oncologic surgeries this spring. The team hopes the U.S. Food and Drug Administration will approve the pen as a medical diagnostic.

“Dr. Eberlin and I both feel strongly that it will improve the care of the patient and revolutionize how we perform surgery,” Suliburk said. “Any time you can perform a more precise, safer surgery, it’s a win for the patients and results in better outcomes.”