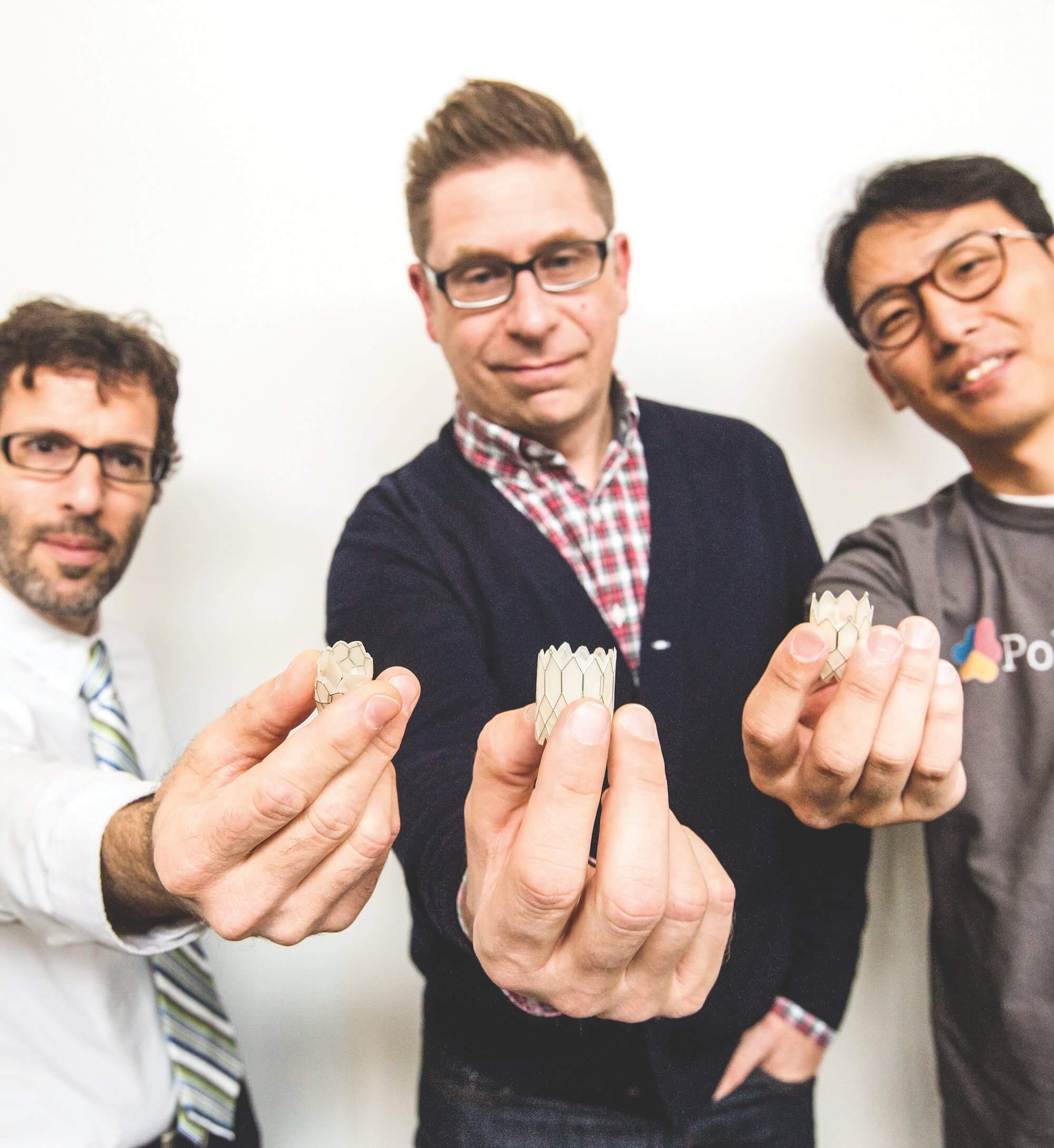 Congenital heart disease, the most common birth defect, can affect the heart’s walls, valves and arteries.

And that baby would have had to die without a major disease, infection or trauma.

This reality prompted Justino and two other researchers to start developing synthetic valves that could fit tiny hearts of varying sizes. Justino teamed up with Daniel Harrington, Ph.D., assistant professor at The University of Texas Health Science Center at Houston, and Kwon Soo Chun, Ph.D., a pediatric cardiology instructor at Baylor, to form a company called PolyVascular. They recently participated in the TMC Innovation Institute’s TMCx medical device accelerator.

The medical device startup creates valves that can be scaled to a range of diameters. Valves for newborns and young children need to be as tiny as 8, 10 or 11 millimeters.

“There are basically no manufactured valves of that size,” Justino said.

The current procedure to replace heart valves with other human valves is similar to an organ transplant in that the patient’s immune system must accept the new tissue.

However, the replacement valves could weaken over time, creating the need for another open-heart surgery.

“Now you are exposed to yet another human valve,” Justino said. “A person could end up being so sensitized to tissue that if they needed to have an organ transplant, they may not be eligible.”

The standard way to build replacement valves involves hand-sewing human or animal tissue around a frame. These are mostly crafted for adult heart valves, so surgeons with tiny patients often end up retrofitting the valves to fit individual bodies.

PolyVascular’s idea is to change the manufacturing paradigm to make valves in small sizes, without human or animal tissue.

“We can bring an entirely new way of manufacturing that doesn’t involve hand-sewing of biologic tissue on a frame,” Justino said.

In addition, PolyVascular valves would be implanted through a minimally-invasive procedure using a catheter, which means the open-heart surgery now required to replace valves would not be necessary.

Chester Koh, M.D., has known Justino for close to four years and is familiar with the work he is doing at PolyVascular.

“His company has had a long pathway and a great story about perseverance, and about filling a niche need in the market,” said Koh, a pediatric urologist at Texas Children’s Hospital and associate professor of urology, pediatrics and OB/GYN at Baylor College of Medicine. “I give him a lot of credit for balancing his priority of taking care of patients while also being a physician scientist who brings innovative things from the lab to the bedside.”

The hurdles for pediatric device development are high: Not only is the pediatric field 10 years behind the adult market, but children and parents appear to be less willing to participate in clinical trials, said Koh, who directs the pediatric robotic surgery program at Texas Children’s and Baylor and co-directs a pediatric medical device consortium in Southern California and Houston that is supported by the U.S. Food & Drug Administration (FDA).

Often there is an unmet need in the pediatric world for pint-sized devices, but investors don’t see enough financial potential for them, so many never come to market. But Koh and Justino are trying to change that.

“We need to think creatively to change the financial process with regard to the development of pediatric devices,” Justino said. “If we do our job right, and we can get the investment in a good valve and treat it from the  get-go, the return to society and child could be enormous.”

Justino and his team have reached some milestones along the way to commercialization, including meeting with medical device manufacturers who are eager to work with PolyVascular.

In addition, the team has successfully performed pre-clinical trials of their valve in sheep. In testing, they were able to get their valve to work for 200 million cycles to meet clinical standards.

“That translates to five years of durability in the body at a regular heart rate,” Harrington said.

Next, PolyVascular is going for FDA clearance in order to market their product as a Class III medical device, meaning the device would be implanted in the human body.

Reaching this milestone will take millions of dollars in funding. Justino believes they will need $5 to $7 million to get them through the manufacturer’s contract, to perform additional animal studies and then be ready for human clinical trials. It could be two or three years until the device is ready for human trials, and then longer before it would be ready for widespread use.

“We see it getting closer now,” Justino said. “Approval for general use could be in five, six or seven years, but we will get it into patients who need it as part of the clinical trial.”