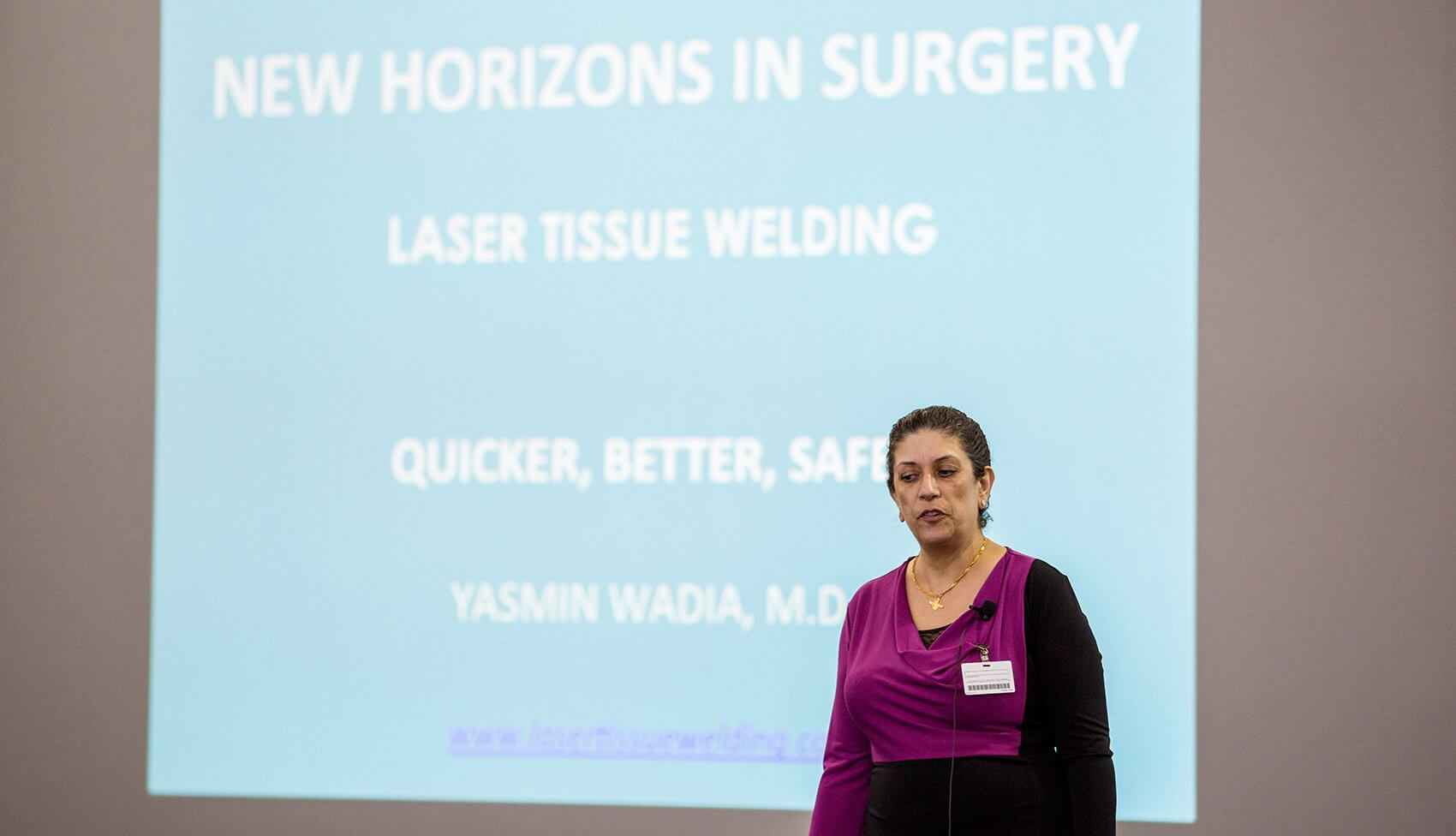 In operating rooms across the country, surgeons methodically maneuver needles through tissue, suturing organs together with delicate precision. In other instances, surgical staples are used to join tissue together— or transect and divide organs—as they’re fired into the body with a satisfying, barely perceptible ‘ka-chunk.’ Blood vessels to be divided in the course of removing an organ must be properly controlled to prevent bleeding—either by fusing the walls together with electrical energy or clamping and tying off the vessel. In the world of modern medicine, stapling, sewing and burning tissue together are becoming increasingly inadequate solutions.

“Consider living in a world where everything that needs to be connected can only be done by either tying it with ropes, tiny stitches, staples or screws—one at a time, manually,” said Yasmin Wadia, M.D., a cardiothoracic surgeon and chief executive officer of Laser Tissue Welding. “And in addition, if something breaks or leaks, the only option is to burn it until it chars black. Well, those are the tools that surgeons are handed every day in the operating room.”

Throughout the history of the profession, bonding the edges of human tissue has been a vital step in most surgical procedures. Laser Tissue Welding, a bio-therapeutic company focusing on areas of unmet surgical need, aims to bring those techniques into the 21st century. Through their technology for joining and sealing tissues—which uses precision laser mediated tissue welding—Wadia and her team are striving to commercialize suture-less surgical therapies. For them, it’s simply a matter of “point, aim, and fuse.”

“Laser tissue welding is an advanced surgical ability to rapidly join and seal tissues with a biologic solder scaffold,” explained Wadia. “Every application of use we are addressing is simultaneously an unmet clinical need and a new surgical capability; from stopping bleeding in patients who have lost the ability to clot to bone reconstruction and even nerve and spinal cord repair.”

With possible applications for over 3000 current surgical procedures, the laser tissue welding technology that Wadia herself invented has the potential to incite a paradigm shift in surgical capabilities. Particularly well suited for minimally invasive and robotic surgery, the technology can even save lives when used in surgical procedures on patients suffering from clotting deficiencies who are at risk for bleeding to death on the operating table.

“My journey started during my internship in medical school, when I learned that there are really simple things that we cannot fix with our current technology,” Wadia reflected. “The epiphany suddenly struck me one day in 1999—in the lab at the Oregon Medical Laser Center—and I just knew how to make it happen. I created a biologic solder and scaffold, picked a laser wavelength and suitable irradiance, and was able to weld a piece of liver perfectly. That led to 27 successful pig experiments without a single complication. I moved to Houston in 2000 to join the Texas Heart Institute—five years later, the patent was issued and I licensed my own invention to start the company.”

“This concept is not new,” she added. “In fact, welding of metals and automation makes the technologically advanced world we live in possible. Every biomedical engineering facility, and a lot of surgeons, have tried to weld tissues going back to 1979. The secret lies in the discovery of the two biological scaffold materials, as well as understanding the unmet needs and applicable how-to surgical techniques.”

Even with a long approval process stretching out in front of her—Wadia anticipates it will take five to eight years to get through the FDA approval process with consistent funding—her conviction in her technology, and its potential to change the game for surgeons nationwide, is unshakable.

“It’s critical to understand that innovation extends to the business of entrepreneurship as well,” reflected Wadia. “While the science may work flawlessly, human interference and financial constraints will create obstructions and slow you down. When confronted with that, all you can do is be persistent. In entrepreneurship, if you give up, you die.”