Eyes on the Prize

Reimagining the delivery system for eye medication, researchers at Baylor College of Medicine have developed a nanowafer technology that proves more effective than topical eye drops

Eyes on the Prize 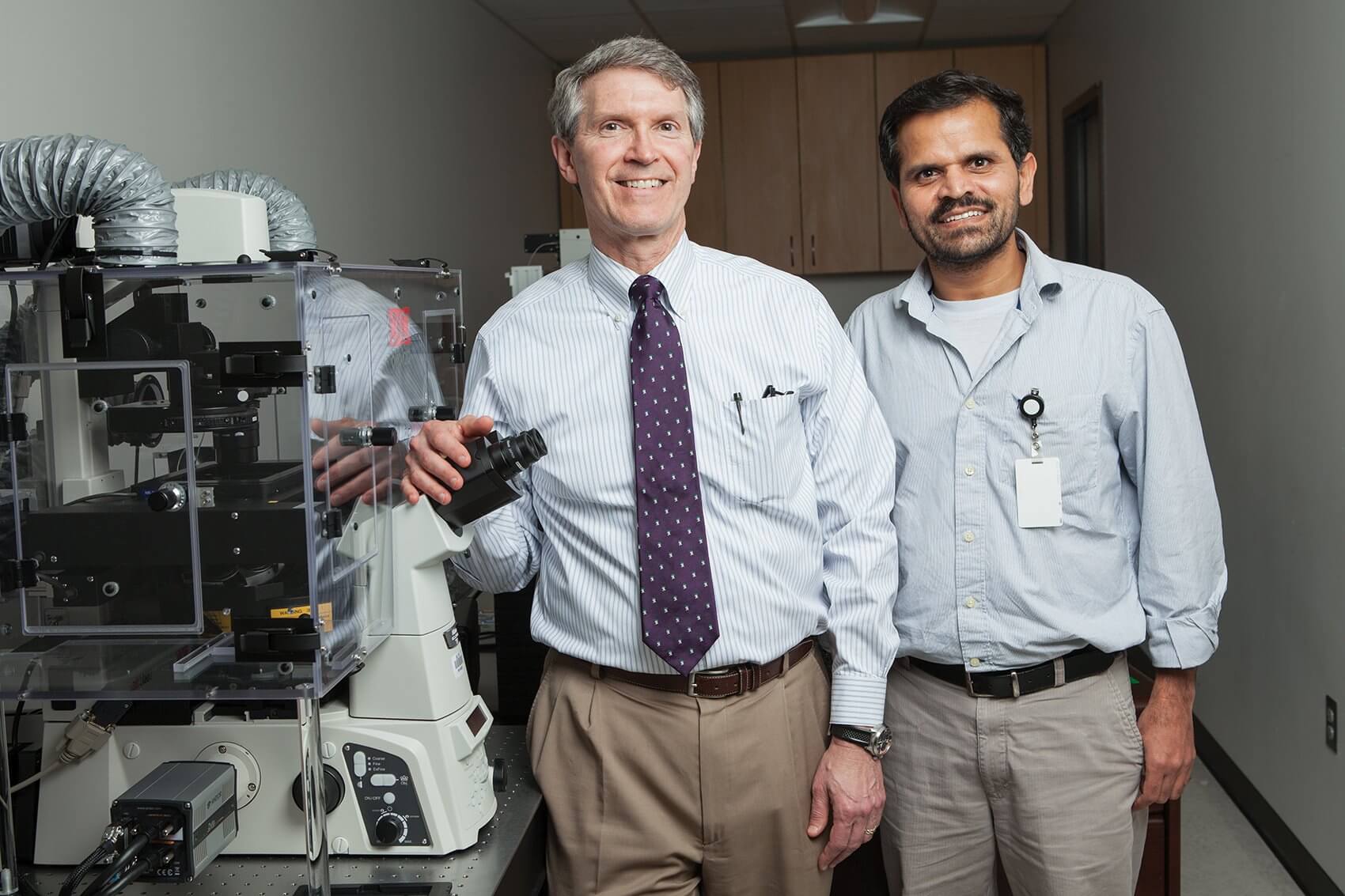 Your eye twitches subtly as the dispenser approaches the periphery of your vision, despite your best intentions to look away. As your fingers pry your eyelids open, a makeshift vise that seems ill-equipped to the task at hand, your lids struggle to clamp shut in defense of the looming foreign object. After a few failed attempts, resulting in several drops dribbling down your cheek, the elusive liquid finally hits its target, resulting in several minutes of furious rubbing and blinking. But how effective is all this aggravation at treating the underlying problem?

Most people can relate to the frustrating reality of using topical eye drops. While they might seem like a necessary annoyance in treating eye injuries and ailments, using eye drops multiple times per day can cause side effects such as irritation and toxicity from high concentrations, while poor patient compliance also poses problems.

In response to these issues, researchers at Baylor College of Medicine have developed a nanowafer drug delivery system, where medication is slowly released from a nanowafer—a small transparent disc, containing arrays of drug-loaded nanoreservoirs, placed on the surface of the eye.

In their latest study published in ACS Nano, researchers found that in mice, the nanowafer drug delivery system was more effective in treating corneal neovascularization, which results in severe corneal clouding and blood vessel ingrowth, than a topical eye drop therapy.

“One of our major discoveries has been that it looks like the short contact time of eye drops may not be sufficient for the medication to be effective,” noted Stephen C. Pflugfelder, M.D., professor of ophthalmology at Baylor and an author on the paper. “Eye drops are very inefficient because they are diluted by the tears and then rapidly washed away from the eye, leaving very little time for the medication in the drop to be picked up or absorbed by the tissue. This technology is a whole different mechanism for achieving chronic, sustained levels—we’re finding much higher penetration into the tissue.”

Ghanashyam Acharya, Ph.D., assistant professor of ophthalmology at Baylor and senior author of the paper, developed the wafer technology to be placed on the surface of the eye, where it slowly dissolves while maintaining a high concentration of the drug in the tear film and loads up the tissue to provide better efficacy.

“Once you place the technology on the surface of the eye, slowly the drug will diffuse as tears come into contact with the wafer,” he explained. “Over a period of time, the drug will continue to diffuse into the eye and spreads throughout the ocular tissue. Eventually, at the end of a predetermined period of time, it will dissolve and disappear.”

Researchers are now working on increasing the drug release from the nanowafer from once a day to one to two weeks. “The nanowafer contains these small wells,” explained Acharya. “So by controlling the depth and diameter of the wells, we can control the amount of drug that we deliver, as well as the release time. Some drugs you take for a week, while others take only a day to be effective, so we can modulate them as required.”

Using an animal model, the researchers sought to determine whether the wafer technology would deliver medication more consistently to the eye when treating corneal neovascularization, which can be blinding.

“Dry eye is the major thing that we’re targeting with this technology,” said Acharya. “Patients with that have to take eye drops regularly, and Steve is an expert in dry eye disease. That’s one thing that he told me when we started—this is the best way to address that condition, in both chronic and mild forms.”

“Most people think of dry eye disease as an annoyance, but it runs the spectrum from causing blindness all the way to being a minor source of aggravation that might simply require periodic eye drops,” added Pflugfelder. “There are people that are putting drops in every hour and they’re not getting relief and their corneas are still getting scarred. For moderate to severe chronic dry eye cases, this would revolutionize treatment. In terms of the magnitude of the problem, there are tens of millions of people affected by dry eye worldwide—it’s a huge market.”

Acharya and Pflugfelder believe that the nanowafer is not limited in the scope of its potential applications. Anything that has to do with the eye, from ocular injuries to infections, can be attempted.

“There are many conditions it could be used for,” said Pflugfelder. “From glaucoma, to treatment after an injury, to delivering anti-inflammatory therapy. It could even be used following surgery—if one wafer could be put in your eye after cataract surgery, then that would be all the medication that you need.”

“Eye injures are a big thing, especially military or combat-related injuries where soldiers sustain repeated trauma to the eye,” he added. “Putting in eye drops is usually the last thing on their mind, so if one of their physicians could put this in their eye right away, it might prevent a lot of the problems that develop weeks after the injury.”

There are other concealed benefits that this new technology might offer—because the nanowafer does not require refrigeration, it would prove useful in treating eye infections and injuries in developing countries.

“The nanowafer can actually stabilize the drug,” said Acharya. “In some countries like India and parts of Africa, during monsoon season, there are a lot of eye infections. In those parts of the world, where there may not be proper electricity or refrigeration, you can distribute the wafers to people who can use them whenever they want and only have to store them for a limited period of time. It completely avoids the necessity of refrigerating bottles of eye drops. That gets handy, particularly in resource-challenged settings.”

Leveraging their combined depth of expertise, Acharya and Pflugfelder’s partnership has been instrumental in allowing them to think outside the box. “This is a perfect synergy between a clinician scientist and a bioengineer or basic scientist—it’s a testament to how we can all come together to develop better devices,” said Acharya. “The driving force behind this project has been Steve’s constant encouragement and guidance. All of these things will keep on taking us farther.”

“Currently, almost all eye medication is dispensed in either eye drops or topical gels and ointments,” said Pflugfelder. “Right now, there are no other options for a sustained delivery system. I think this [technology] could be huge—it would enhance the effectiveness of the drug, improve compliance, and I think it will mark a major shift in the way that these drugs are induced.”