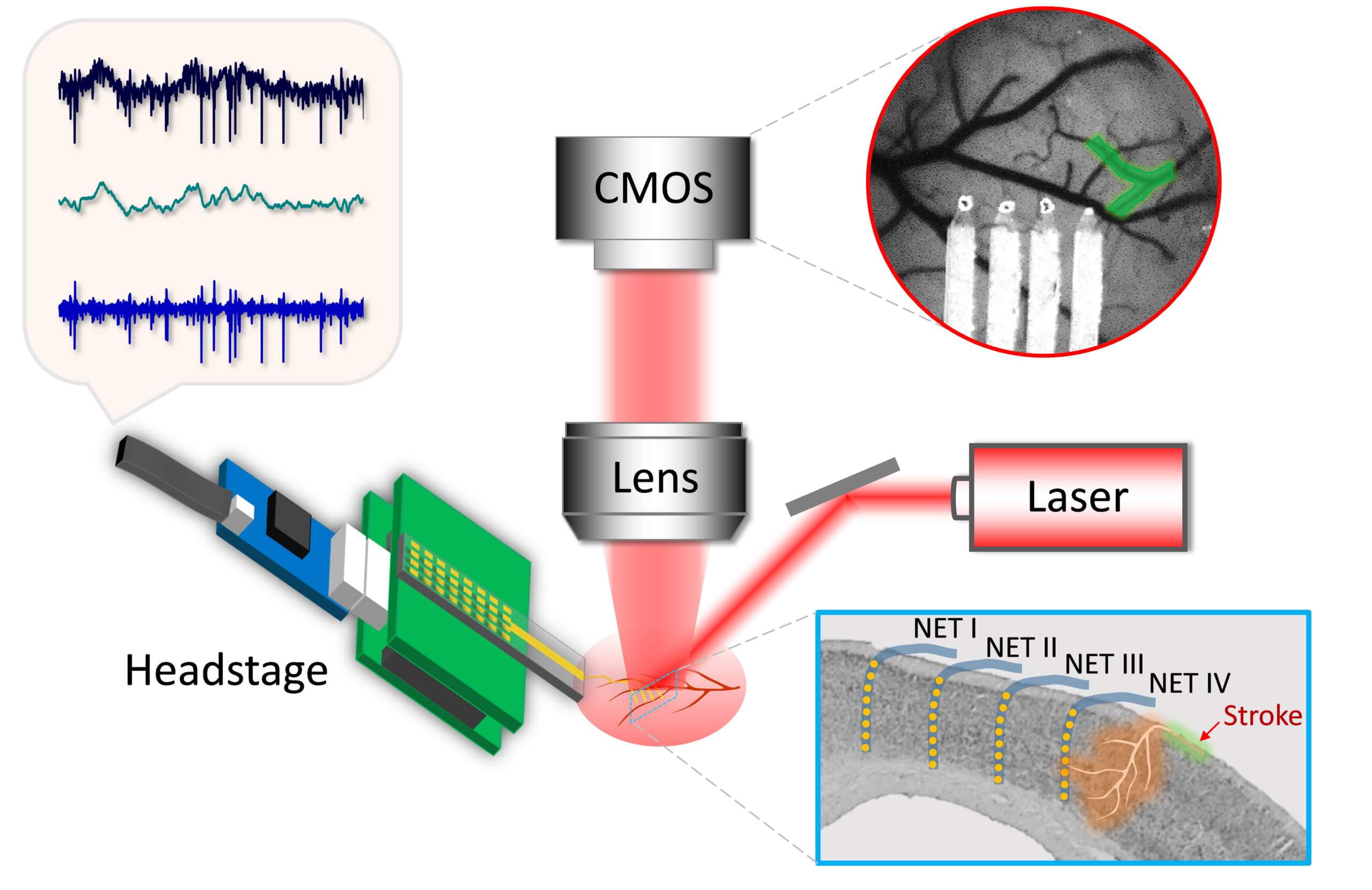 Increased blood flow to the brain after a microscopic stroke doesn’t mean that part of the brain has recovered. At least not yet.

A study in Science Advances by Rice University neuroengineer Lan Luan and her colleagues used advanced neural monitoring technology to discover a significant disconnect between how long it takes blood flow and brain function to recover in the region of a microinfarct, a tiny stroke in tissue less than 1 millimeter in size.

The study led by Luan, a core faculty member of Rice’s Neuroengineering Initiative, shows “a pronounced neurovascular dissociation that occurs immediately after small-scale strokes, becomes the most severe a few days after, lasts into chronic periods and varies with the level of ischemia,” the researchers wrote.

The study in rodent models revealed the restoration of blood flow in the brain occurs first, followed by restoration of neuronal electrical activity. They observed that neuronal recovery could take weeks even for small strokes, and possibly longer for larger strokes.

The study required implants and instrumentation designed to monitor both blood flow and brain activity simultaneously before, during and after the onset of strokes.

“This started with the device,” said Luan, an assistant professor of electrical and computer engineering at Rice’s Brown School of Engineering, who developed a flexible neural electrode with co-author Chong Xiewhile both were at the University of Texas at Austin. “That was my transition from being trained as a material physicist to neuroengineering.

“As soon as we had the electrodes, I wanted to use them to understand brain functions and dysfunctions in a domain that was difficult to probe with previous technology,” she said. “The electrodes are extremely flexible and well suited to be combined with optical imaging in exactly the same brain regions.”

Rice neurobiologists show that increased blood flow to the brain is not an accurate indicator of neuronal recovery after a microscopic stroke. The researchers created a custom implant that combines the ability to simultaneously monitor both blood flow and brain activity. Illustration courtesy of the Luan Laboratory

The electrodes were combined with optical lines able to measure blood flow by recording laser speckle patterns. The combined data, gathered for as long as eight weeks, gave the researchers an accurate comparison between blood flow and electrical activity.

“The strokes we focus on are so small that when they happen, it’s very hard to detect them from behavioral measures,” Luan said. “We would not easily see impairment in animal locomotion, meaning the animal could walk away just fine, from a lay perspective.

“The implications in humans are similar,” she said. “These microinfarcts can occur spontaneously, especially in aged populations. Because they’re so tiny, it’s not like you’re having a stroke. You will not notice it at all. But it has been long hypothesized that it’s related to vascular dementia.”

Luan said the neurological impact of individual microinfarcts is largely unknown. “That’s what motivated us to set up a series of experiments to really directly measure the impacts of those extremely small-scale injuries,” she said.

While the study would be hard to replicate in humans, the implications could improve diagnoses of patients who suffer microinfarcts.

“There are a lot of similarities in neurovascular coupling in rodent models and in humans,” she said. “What we observed in rodents likely has a similar signature in humans, and I hope that can be of use to clinicians.”

Luan said she is continuing her research at Rice, supported by a five-year R01 grant from the National Institute of Neurological Disorders and Stroke.

“We’re interested in knowing not just how a single microinfarct would alter neural activity but also, cumulatively, whether the effect of multiple microinfarcts that occur at different times would be stronger or weaker than the sum of the individuals,” she said.

Fei He, a research specialist in Luan’s Rice laboratory, is lead author of the paper. Co-authors are Rice graduate students Hanlin Zhu and Xue Li and postdoctoral researchers Zhengtuo Zhao and Colin Sullender; and University of Texas at Austin graduate student Michael Williamson, Theresa Jones, a professor of behavioral neuroscience, and Andrew Dunn, a professor of diagnostic medicine and biomedical engineering. Xie is an associate professor of bioengineering and of electrical and computer engineering at Rice.

Additional support for the research was provided by the National Heart, Lung and Blood Institute, the National Institute of Biomedical Imaging and Bioengineering, the Welch Foundation and the Canadian Institutes of Health Research.