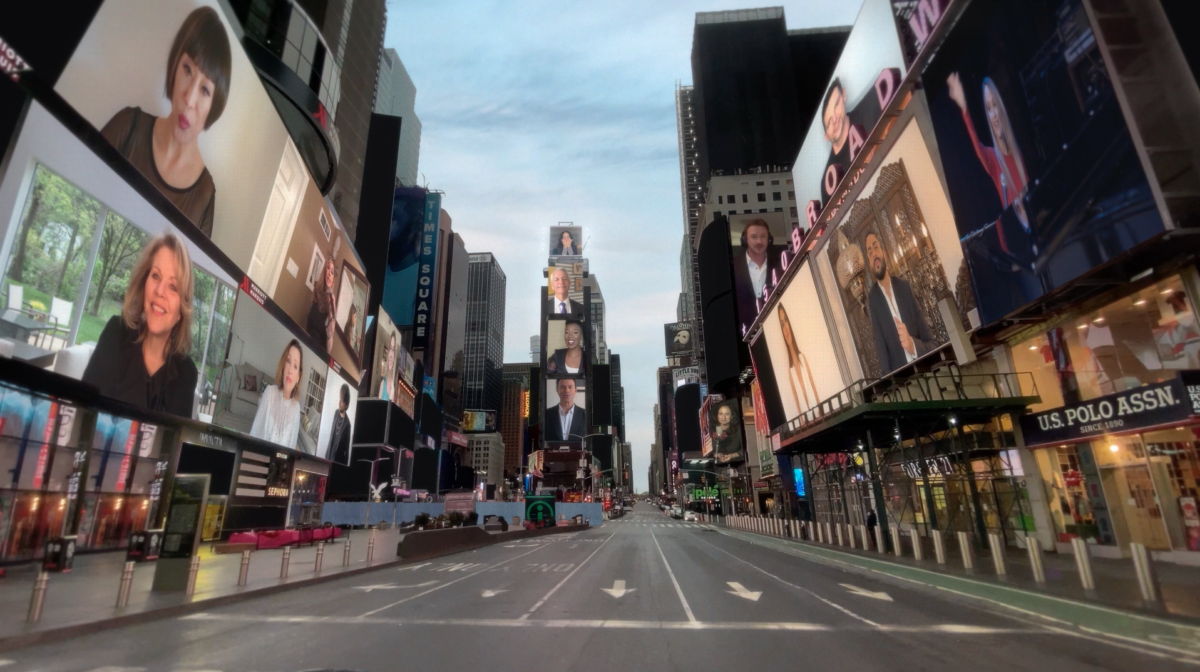 In the 20 years since Libi Lebel founded the Texas Medical Center Orchestra (TMCO), the Julliard-trained musician has sought out composers and other music professionals for collaborations and new opportunities.

When Lebel met Emmy-nominated film, TV and concert music composer Sharon Farber on Facebook a few years ago, she hoped they would work together someday. Then the pandemic hit and Lebel’s phone rang. 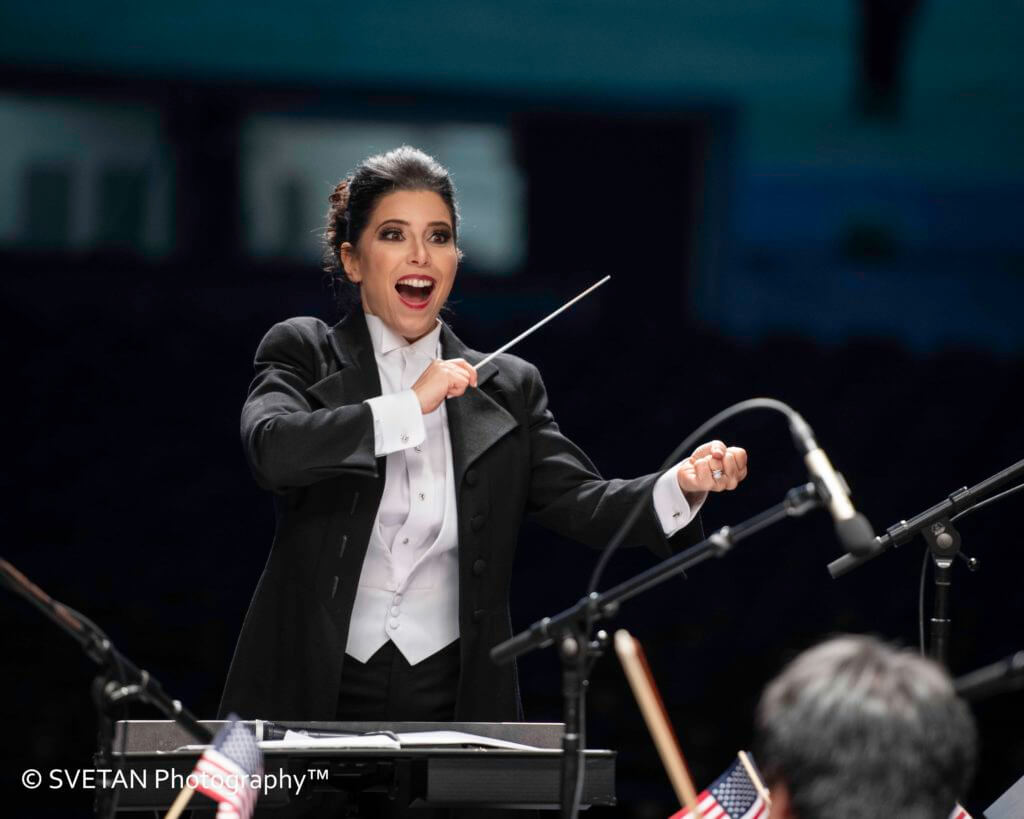 Libi Lebel conducts the Texas Medical Center Orchestra. TMCO is a finalist for The American Prize in the community orchestra division, an honor the orchestra received in 2017. (SVETAN Photography)

“I got a call from Sharon, who said, ‘Look, you are a great fit for this music video project I’m working on,’” recalled Lebel, conductor and artistic director of TMCO, an orchestra composed of health professionals.

Farber explained that she had arranged a song by her friend Diane Warren called “I’m Standing With You” and was looking for some musicians to play it. Actress and singer Chrissy Metz, best known for portraying Kate in the television series “This Is Us,” performed the song in the 2019 film Breakthrough and, months later, it was nominated for an Oscar.

Now, Farber was in the process of enlisting singers and musicians to perform the ballad, virtually, as a message of hope and solidarity during the pandemic. Gev Miron, the video and film director who had first conceived the project, would be creating the video. 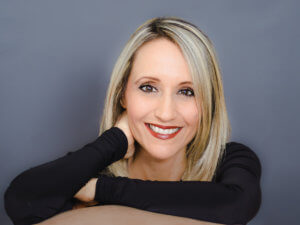 Farber couldn’t think of a better orchestra than TMCO to participate, in part because so many of the musicians were caring for COVID-19 patients during the pandemic. But Lebel needed to listen to the song first.

But there was a small problem, which Farber laughs about now.

“Libi came back to me and said, ‘OK, I have about 75 people from the Texas Medical Center Orchestra who want to be a part of this,’” Farber began. “I said, ‘Hold on. This is for a small orchestra—just a rhythm section and some strings.’ Libi’s response? ‘Well, rearrange it!’”

Farber did just that, arranging the song for a full orchestra.

(Watch the music video below.)

“Let’s do a music project”

Gev Miron woke up one morning in March, thinking about all his projects that had been cancelled or postponed due to the pandemic.

“I realized that I had to do something—for my own sake, but mostly for other people,” Miron said. “Something needed to be done to elevate people’s spirits. I called Sharon, who is a great friend and collaborator and the best musician I know. I said: Let’s do a music project.” 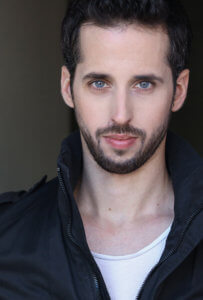 Gev Miron is an award-winning director of videos, films and commercials. (Courtesy photo)

At first, they planned a virtual event for the Los Angeles area only. But Farber and Miron realized quickly that the project needed to be much broader in scope. Once they settled on “I’m Standing With You,” Farber, Miron and Warren—a Grammy Award-winning songwriter whose power ballads have been performed by Celine Dion, Lady Gaga, Aerosmith and others—got busy enlisting singers to perform the song. Famed American opera singer Renée Fleming signed on first.

“After she said yes, of course, everybody wanted to be a part of it,” Farber said.

American pop singer Chris Mann agreed to participate, as did Tina Arena from Australia, Wahu from Kenya, Valeria Altobelli from Italy, Russell Watson from the United Kingdom, Arash Avin from Iran, and many others. In all, singers and instrumentalists from six continents took part.

Everyone got a demo of the song, so they could synch their own performance to one master recording. After the musicians captured audio and video of their own part—usually on an iPhone—they sent it off to Farber and Miron.

Natalie Cheng, a cellist and associate marketing manager at software company Luminare, part of the TMC Innovation community, was one of 73 musicians from TMCO who participated.

“We all got a click track,” Cheng said, referring to the demo sent to each musician. “We put an earbud in one ear and we played along with it. Everyone sat in their own house and played and then sent the track off to the people who put the audio together and synched it with the video.”

While Farber worked on the vocal performances, deciding which singers would sing which passages of the song and who would appear in duos and trios, Miron edited the visuals.

“We started seeing footage on TV of cities and places around the world that were literally abandoned, like an apocalyptic movie,” Miron said. “I told Sharon that this had to be in the video.”

He sent cinematographers to shoot footage in New York City, Israel and other places, and also obtained footage from several major cities.

“When I saw the footage, I realized that in so many city centers you have what used to be called jumbo screens on the buildings,” Miron said. “And I thought, what would be more appropriate than to put the singers onto those screens in their respective countries. … It’s as if you’re watching a concert, even though you’re not there.”

Many of the segments in the final music video feature prominent locations—Times Square in New York City, the statue of Eros in London’s Picadilly Circus, the square in front of Italy’s 14th-century Milan Cathedral—with the musicians superimposed on jumbo screens, just as Miron envisioned.

Then he had the idea to arrange video clips of the performers as if they were all together on one concert stage.

“We wanted people to see that these are real concert musicians who would normally be playing on stage but they cannot because of the pandemic,” Miron said.

You can see Lebel conducting in those segments, in the bottom center, where she would be during a live orchestra performance. Members of the Texas Medical Center Orchestra also appear, in the videos they took of themselves playing their instruments. 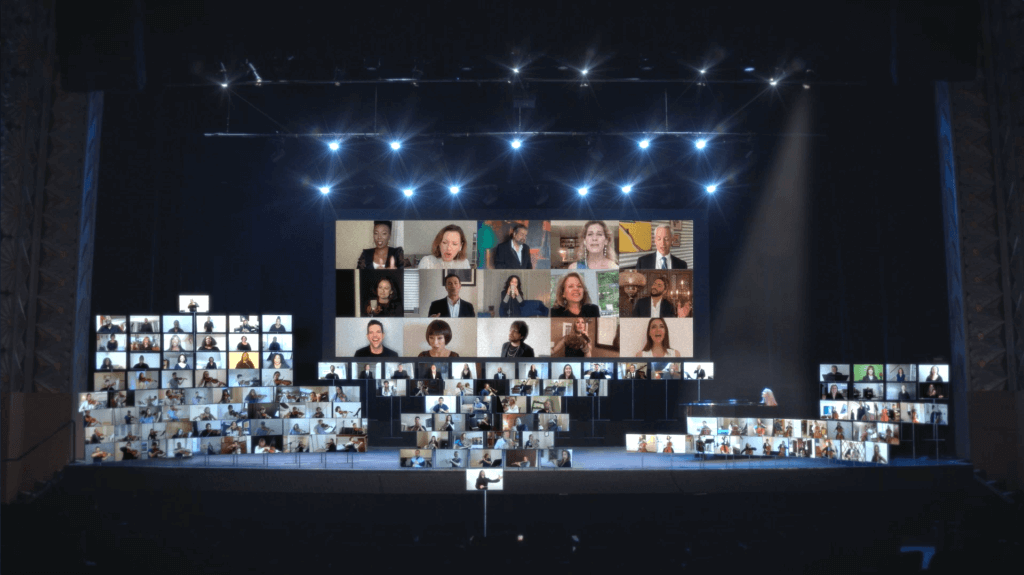 Musicians from around the world, including the Texas Medical Center Orchestra in Houston, performed “I’m Standing With You” to raise money for COVID-19. (Courtesy photo)

Armed with a huge response from the global music community, Warren and Farber approached the United Nations and turned the project into a fundraiser, with proceeds from the video benefitting the United Nations Foundation’s COVID-19 Solidarity Response Fund for the World Health Organization (WHO). 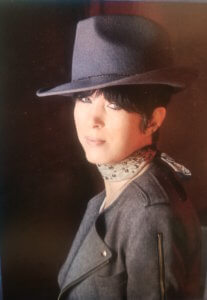 Diane Warren is a veteran songwriter whose compositions have been performed by Lady Gaga, Celine Dion, Aerosmith and others. (Courtesy photo)

The video was released May 22, after Farber, Miron and others spent a busy 10 weeks putting it together. Everyone who participated—about 170 people—volunteered their time. “I’m Standing With You” and other videos released as part of the United National Foundation have raised more than $7 million. Donations can be made at covid19responsefund.org.

Lebel said she was proud to be part of this global effort during COVID-19.

Lebel is already planning the TMCO’s 21st season, which will begin Nov. 7 at Miller Outdoor Theater with a program titled “Love Can Move the World.” The orchestra will be downsized for safety—”strings, percussion, possible bass guitar and a singer,” Lebel said—and the musicians and audience will have enough room to socially distance.

But the “I’m Standing With You” music video was the perfect way to end the orchestra’s 20th season, she said.

“The simple words of the song capture the essence of the love and support we all need at this moment,” Lebel said. “’I’m Standing With You’ is just what people need to hear.”